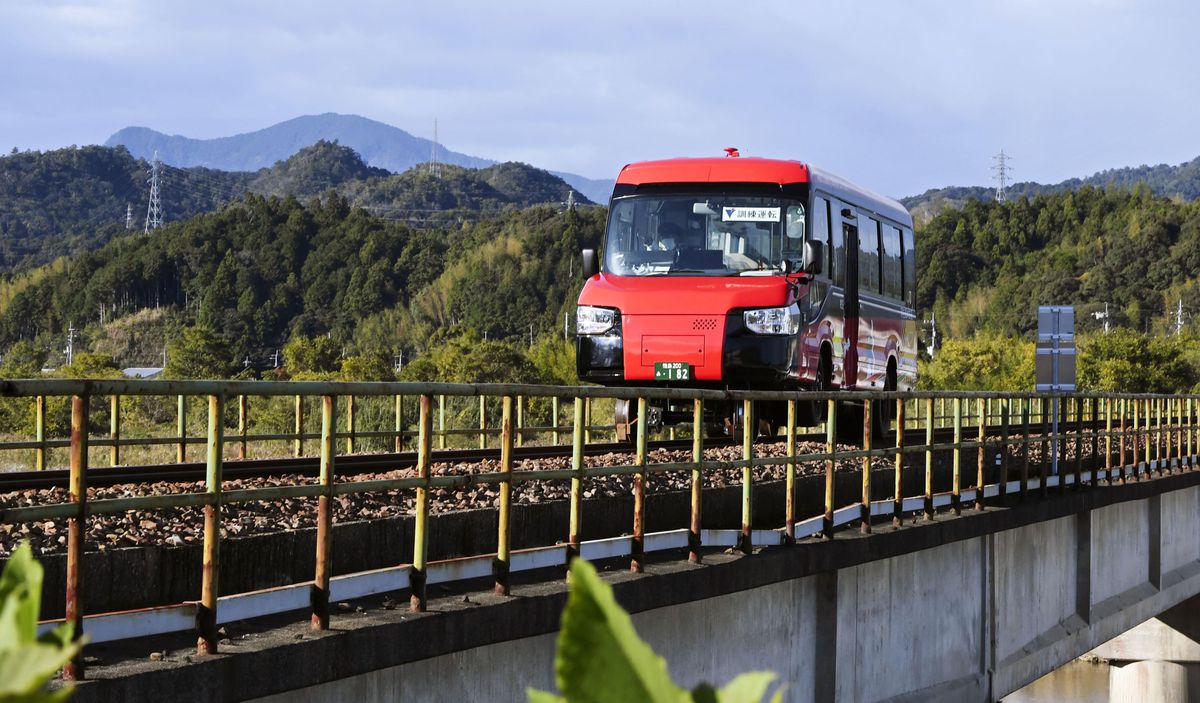 An exciting new dual-mode vehicle (DMV) – which is a bus that can run on both roads and railway tracks – will launch on a route connecting Tokushima and Kochi prefectures on December 25, 2021

The versatile vehicle will be the first operational DMV in the world. Its arrival comes in a region of Japan experiencing sharp depopulation, and which is trying to promote itself specifically as the “lower right of Shikoku.”

The area hopes the DMV will attract train aficionados and tourists from all over Japan.

With not long left until the launch, I decided to take part in a test run and experience the vehicle for myself.

Switching Modes in About 15 Seconds

My test ride started at Awa-Kainan Bunkamura, a tourism facility in the town of Kaiyo in Tokushima Prefecture. The vehicle was a bonnet-type transit bus with 18 seats.

The bus then proceeded to Awa-Kainan Station, about 1 km away, where it connects with the JR Mugi Line and the Asa Seaside Railway.

Next, the vehicle stopped at a “Mode Interchange” – where in the space of about 15 seconds, the driver switched to train mode with all the passengers still onboard. The DMV hardly vibrated during its transformation from bus to train.

Admittedly, it did feel a bit strange traveling on a railway track in a transit bus with stop buttons, but it was refreshing to enjoy the spectacular scenery as the DMV progressed along the coastline.

After arriving at Kannoura Station in the town of Toyo in Kochi Prefecture, some 10 km away, the train wheels rose back up and the vehicle returned to bus mode. We then drove about 4 km to the final stop, Shishikui Onsen in the town of Kaiyo, Tokushima Prefecture, rounding off a journey from the Bunkamura that took just under 40 minutes.

“I’d been looking forward to seeing the actual thing. It was a new and exciting experience, and I was very satisfied at the end. I’m proud that I’ve actually ridden on it,” said a 70-year-old former company employee from Yoshinogawa City, Tokushima Prefecture, who took part in the test run.

A one-way ticket on the DMV is ￥800 JPY ($7 USD) (children are half price). There are 13 to 15 trips per day in both directions, and there is a return trip on weekends that extends toward Muroto.

Regarding the color of the vehicles, there is a red one (Asakaigan Ishin), a blue one (Mirai he no Naminori), and a green one (Sudachi no kaze). Each vehicle reportedly cost about ￥140 million JPY (about $1.2 million USD)  to make.

So why was the DMV brought in?

Reasons include improving public transportation links in that part of Shikoku, and attracting more tourists to the area. But as Toyoki Ihara, Managing Director of Asa Seaside Railway Corporation explains:

“If the coastal roads are ever closed due to a disaster, the railway can serve as emergency transportation because it is made up of tunnels and elevated sections.”

The DMV is a diesel vehicle, but it is cheaper than a diesel locomotive and its fuel economy is about four times better. However, its carrying capacity is only one-fifth.

The Asa Seaside Railway was established in 1988. Construction on a coastal railway linking South Tokushima with East Kochi had been suspended in 1980. Yet the aim was to create/open some kind of connection between the towns of Kaiyo and Toyo. In 1992, the Asato line started operations, but it was unprofitable because the population along the line was too small.

In 2016, the Tokushima Prefectural Government, the major shareholder in the project, announced that it was seriously looking into introducing the DMV. It subsequently set about building DMV vehicles, improving stations, and creating safety systems – with the goal of making the DMV service a reality. Initially, the total project cost was set at ￥1 billion JPY ($8.75 million USD), and the launch was supposed to coincide with Tokyo 2020.

However, the postponement of Tokyo 2020 and the impact of COVID-19 delayed the project. Moreover, in June 2021, the Ministry of Land, Infrastructure, Transport and Tourism demanded reinforcements concerning the wheels, which ultimately delayed the start date further to December 2021.

The team made the necessary reinforcements and improved some other safety aspects, causing the cost of the project to rise to more than ￥1.6 billion JPY (about $14 million USD). However, the team managed to see it through and the launch will happen this month.

A New Flow of People

In an attempt to revitalize the region, local organizations have come up with specific slogans such as “Shikoku’s Lower Right” and “Rising to the Right.”

The southeast Shikoku towns of Kaiyo and Toyo and the city of Muroto are experiencing depopulation, with over 40% of the population having reached the status of aged. There are inaccessible sections in the railway connectivity in this region, something that has surfaced as a talking point in the past.

In theory, the DMV should attract tourists who think “I’d like to ride it once.” But as Koichi Wakitani, Deputy Chief of Tokushima Prefecture’s transportation division points out, “We want them to come back again. The region should do everything possible to get visitors to return.”

Along the rail and road line, there are already banners with phrases such as “This town…world’s first [DMV].”

Local companies catering to tourists have also prepared goods such as key chains, cookies, and souvenirs, excited by the prospect of welcoming new visitors to the area.

“We want visitors who ride the DMV to discover the attractions of this particular region,” says Ihara.

“Without the arrival of people from other areas, we cannot maintain infrastructure here. So, we decided not to bother imitating, and instead create something that is the first in the world,” says Deputy Chief Wakitani, adding, “Riding on the DMV will provide a huge boost to this area.”

Motohiro Wada is a staff writer of the Sankei Shimbun at Takamatsu Bureau.