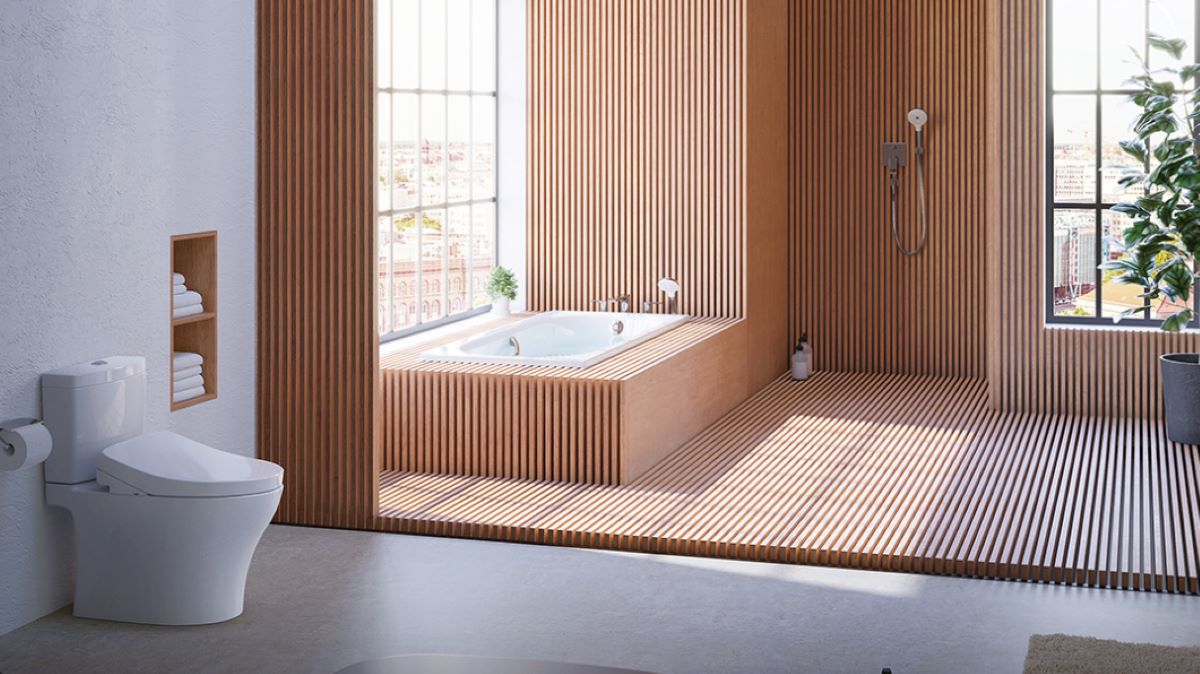 International sales of warm-water washlets — one of the technologies Japan is proud of — are rapidly rising. Even in the United States, where sales had been sluggish for many years due to cultural differences, the increase has been remarkable. Some businesses are reporting numbers for the first half of 2021 that are close to triple the sales of 2019.

Reasons for the new popularity are that washlets are more hygienic and environmentally friendly toilets, helping reduce the use of toilet paper. The toilet paper shortage due to COVID-19 is also thought of as a factor, and the industry is stepping up to respond to the growing demand.

“We’re finally on track to be a trend overseas. I expect the speed of market growth will be completely different from before.”

Shinya Tamura, the executive director of TOTO, the company with the top market share in washlet (bidet) toilets with a heated water function, expressed confidence about the expansion of international sales in an interview with Sankei Shimbun in late November.

According to TOTO, washlet sales have been steady in Europe and China, but sales growth has been remarkable in the US. Assume that the sales volume in the US was 100 pieces in 2015. That volume increased to 215 in 2019. But then it jumped to 394 in 2020, after the pandemic began.

If you look at January to June year-over-year, sales skyrocketed to 278 in the first half of 2021, whereas only 100 units were sold in the same period before the pandemic.

The prototype for washlets was based on an American medical device for people suffering from hemorrhoids. TOTO’s predecessor, Toyo Toki, was the first to import it into Japan. It developed the device into a standard household item in 1980.

Refining the technology through repetitive design efforts, such as calculating the angle for the perfect cleansing water jet, improving the automatic cleaning function of the spray nozzle, the company improved water conservation while maintaining cleansing performance.

According to a survey done by the Cabinet office of the Japanese government in March 2020, more than 80% of Japanese households have a warm-water washlet, making them a daily living necessity in Japan. Meanwhile, the company has struggled to find acceptance in the United States since sales began in 1986.

Western Psychology Sits in the Way

The biggest impediment to the adoption of washlets into daily American life seems to have been the psychological hurdle. Users have found it difficult to accept a device they have never seen before and incorporate it into their routine of passing waste from the body.

In America, the tendency of avoiding speaking of bathroom activities in public is strong, so advertisements and TV commercials are not practical. When TOTO opened specialty stores in American shopping malls in the 2000s, other storefronts complained, and TOTO was forced to withdraw.

Also, there are many old houses in the US, a land where there are few earthquakes. As a result, few homes with old bathrooms have power outlets where they would be needed, so construction would be required. Moreover, there is often concern about causing an electrical fault if power is provided in rooms with major water use, such as bathrooms. These cultural and financial reasons stand out.

Although the situation wasn’t improving, the company’s sales force carried out grassroots marketing for many years, focusing on selling to Japanese hotel chains, and gradually adding other hotels. Sales of washlets began to expand almost imperceptibly, and then sales channels improved. They also began selling on Amazon.

Adult children started buying them for their parents for Christmas, and in 2019 washlets were listed in the top 10 best seller list on Amazon’s website. Moreover, the comment section was full of rave reviews:

“I should have bought one earlier!” “It’s amazing.”

Tamura recalled: “In the beginning, social media was not well-developed, so it was truly just word-of-mouth. It took an insane amount of time for people to start using them.”

At the beginning of the pandemic, toilet paper hoarding led to shortages in both Japan and the United States. In April 2020, in the middle of that situation, the New York Times, one of the United States’ most influential media outlets, published a column.

The headline on the digital edition read, “Stop Using Toilet Paper.” The article pointed out that “while the majority of households in Japan have high-tech toilets capable of cleansing users with precisely directed temperature-controlled streams of water, the rest of the world has been slow to follow.”

The article argued that, by using water instead of paper, washlets have great merits, both hygienic and ecological.

Demand for washlets increased immediately due to the shortage of toilet paper. According to Tamura, sales were already trending upward before the pandemic, and the supply system was in place to handle the increase in orders and sales channels.

Another trend in the United States was also helpful. Enjoying nice lighting and music in the bathroom meant more electricity was being added to bathrooms in new construction and renovations, creating conditions favorable for installing washlets.

Seeing an opportunity for the future in warm-water washlets, new competition also emerged in the domestic American market.

Demand is increasing not only in the United States. A representative from LIXIL, one of the three biggest washlet manufacturers, explained that orders in China alone have outnumbered the volume of orders for all of Japan. The market is growing rapidly as the number of wealthy people increases.

Sales have also been strong in Southeast Asia. The introduction of more affordable products specializing in washing, but without functions such as drying and deodorizing, better match the needs in that region.

Panasonic also has seen a major increase in sales in China and Taiwan, and has plans to advance into the Thai market in 2022.

According to Tamura, the growth in international popularity of warm-water washlets can be illustrated with another image.

If Japan is at 10 in terms of market saturation, then currently Southeast Asia is at 0.5, the United States is at 1, and China is no more than 2 or 3. “That’s how much growth remains in the market,” he said. Moving forward, the market trends for these Japanese companies bear watching.

(Read the Sankei Shimbun article in Japanese at this link.