The Case for ‘JAUKUS’ 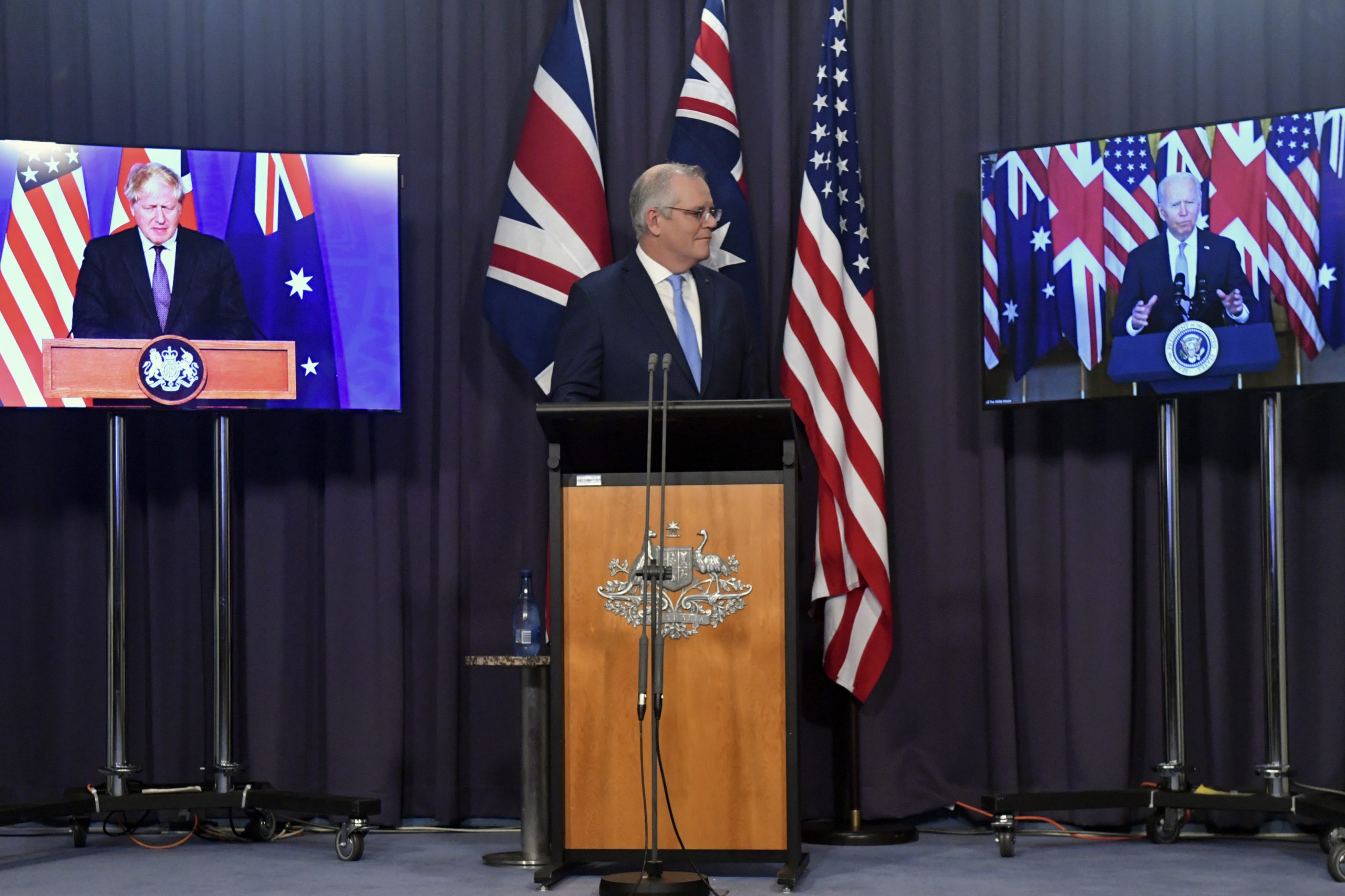 Australia's Prime Minister Scott Morrison, center, appears on stage with video links to Britain's Prime Minister Boris Johnson, left, and U.S. President Joe Biden at a joint press conference at Parliament House in Canberra, Thursday, Sept. 16, 2021. The leaders are announcing a security alliance that will allow for greater sharing of defense capabilities. Will it expand to include Japan? (Mick Tsikas/AAP Image via AP)

On 12th April, the Sankei Shimbun revealed that Japanese officials are being sounded out on the possibility of Japan joining AUKUS, the Australia-United Kingdom (UK)-United States (US) trilateral defense technology group.

A prompt statement by Hirokazu Matsuno, Chief Cabinet Secretary, the following day seemed to pour some cold water on the report. However, speculation about India and Japan, fellow members of the Quadrilateral Security Dialogue (QUAD), joining AUKUS have accompanied the group since its announcement in September 2021.

The response of Jen Psaki, White House Press Secretary, to this question ‘What would it become: JAUKUS; JIAUKUS?’ drew laughs from the press, and was widely reported as a rejection. However, the Biden administration has emphasized that the group is not designed to exclude regional cooperation with other partners, and has never in fact ruled out broadening AUKUS membership.

Whatever the veracity of this latest report, it is still worth reflecting on the factors that need to be considered for AUKUS to become ‘JAUKUS’, and the implications if Japan did join.


The logic behind ‘JAUKUS’

According to the Sankei article, there are positive attitudes to the prospect of JAUKUS on both sides. On the one hand, existing AUKUS members would welcome the prospect of Japanese technological know-how to support joint development of hypersonic weapons and electronic warfare capabilities, as well as synergies in research on cyber, artificial intelligence and quantum computing. On the other hand, Japan’s own defense capacity would benefit directly from sharing in these capabilities, and diversifying to a broader network of tech allies would offer advantages for Japan’s national security that has hitherto relied mainly on its bilateral alliance with the US.

Structurally, the fact that Japan already has bilateral defense and security arrangements with all three members of AUKUS is an advantage. The US-Japan alliance goes back several decades, and is by far the most important security relationship in the region. However, the arrangements linking Japan with Australia and the UK have also drawn ever tighter over the last decade. These developments make the step from there to a multilateral pact, which is anyway far short of a mutual defense treaty, much more bridgeable than would have been the case until recently.

The addition of Japan would also confound the charge that AUKUS is an “Anglo-Saxon” club. As it stands, charges of racial discrimination and exclusion can be used to build a narrative that connects AUKUS and similar cooperation efforts to memories of racist subjugation and Cold War manipulation. Although similar issues color relations between Japan and its neighbors Korea and the People’s Republic of China (PRC), attitudes to Japan in other parts of Asia have dramatically recovered since the post war years. Still, the impact of “anti-western” narratives on popular opinion and elite attitudes in the region should not be dismissed lightly.

The reporting of soundings at an official level may indicate a shift in attitudes brought on by a number of contextual developments.

Russia’s renewed invasion of Ukraine has drawn varied responses from allies around the world. One of the strongest contrasts is between QUAD members Japan and India. While the former was the first Asian nation to sanction and condemn Russian aggression, and has sent various forms of aid to Ukraine, the latter has taken a very different position. As the QUAD agenda moves away from its earlier conception as a “security dialogue”, towards issues like pandemic response, and so on, AUKUS may become a more appropriate framework for security cooperation among countries with like-minded attitudes to global order.

One way of looking at JAUKUS is as a QUAD where the UK has been substituted for India. This makes some sense in the light of two factors. One is the continued development of the UK’s security commitment to the Indo-Pacific through the Integrated Review and subsequent “tilt” to the region, including deepening relations with both Japan and Australia. The other is that the US has made moves to indicate its acceptance of the UK as its principal European ally for cooperation in the region.

Another development that strengthens the logic of JAUKUS for Japan is the pressing need to respond to the deepening and acceleration of Russia-PRC alignment. Joint People’s Liberation Army Navy and Russian Navy patrols around Japan’s home islands and straits have alarmed defense planners.

The breaking off of talks to end the state of war between Russia and Japan adds to the tensions that fresh deployments of Russian anti-missile facilities on the northern islands had already raised. While such developments pose an operational threat to Japan’s national security, the prospect of a unified Russia-PRC defense industrial partnership is an incentive for Japan to broaden its partnerships to keep up to speed, and potentially ahead of the game, on emerging technologies.


What stands in the way of JAUKUS?

Arguments against Japan’s AUKUS membership can be expected to come from three sources. One is a conservative attachment to the bilateral US-Japan alliance, which has served Japan so well since the post-war period. Support for this alliance is deeply entrenched in Japan’s security institutions, and some reluctance to divide diplomatic energies across a wider range of countries is to be expected. By moving from a bilateral to a multilateral format, Japan would also be setting itself apart from others in the region who have bilateral alliances with America, such as the Republic of Korea, the Philippines and Thailand.

The main counter-argument will likely be driven by concerns that joining AUKUS would expose Japan to the consequences of taking an anti-PRC or Chinese containment stance. The PRC has spoken out consistently against AUKUS as representative of “cold war thinking” and the destabilization of the region’s security, not to mention threatening the nuclear anti-proliferation regime (a sensitive area for Japan as the only victim of nuclear weapons).

A third factor may be hesitancy on the part of AUKUS members about Japan’s ability to engage in sensitive research and development in a way that protects secret information and resists attempted espionage. While Tokyo has made strong commitments to upgrading its intelligence and counterintelligence capacity, there is more to be done before it can meet the standard required in particular areas.

Although there may be some way to go before AUKUS becomes JAUKUS, there is a sound strategic logic behind it, and strong contextual factors that prompt closer consideration of such a move. The recent report alleging Japan is being approached on the question of membership could be seen as one of a number of “kite flying” initiatives (like Shinzo Abe’s, Japan’s former Prime Minister, suggestion to consider nuclear sharing arrangements) as Tokyo prepares to update its national security strategies in 2022.

Whatever the outcome, at a minimum, the debate serves to demonstrate that bullying and sabre rattling by the PRC and Russia has strategic consequences, and Japan and its friends have options to consider in response.

This article is part of the Council on Geostrategy’s “Britain’s World” series, where it was first published on April 13, 2022. Find other articles by Dr. Philip Shetler-Jones and about the Council on JAPAN Forward.