“The Maturity of Faith”: An Interview with Martin Scorsese

On the occasion of his acceptance of the Praemium Imperiale prize, awarded annually by the Japan Art Association with honorary patron H.I.E. Prince Hitachi, the Sankei Shimbun sat down with director Martin Scorsese to discuss his film Silence based on the novel by Shusaku Endo, when he acted for Akira Kurosawa, and how Japan and its filmmakers have influenced his work.

Sankei Shimbun: I want to begin with your latest film, Silence. How did you get to know Shusaku Endo’s novel? Why did you want to make this into a film?

Martin Scorsese: The novel was given to me by the Episcopal Archbishop Paul Moore, here in New York, after seeing a rough cut of The Last Temptation of Christ. Because of the controversial nature of [the film] he was prepared not to like it, but afterwards he [told me that] he enjoyed the film and loved the ideas in the picture. He said, “If you really want to do something about faith, I’m going to give you a book called Silence by Shusaku Endo.” 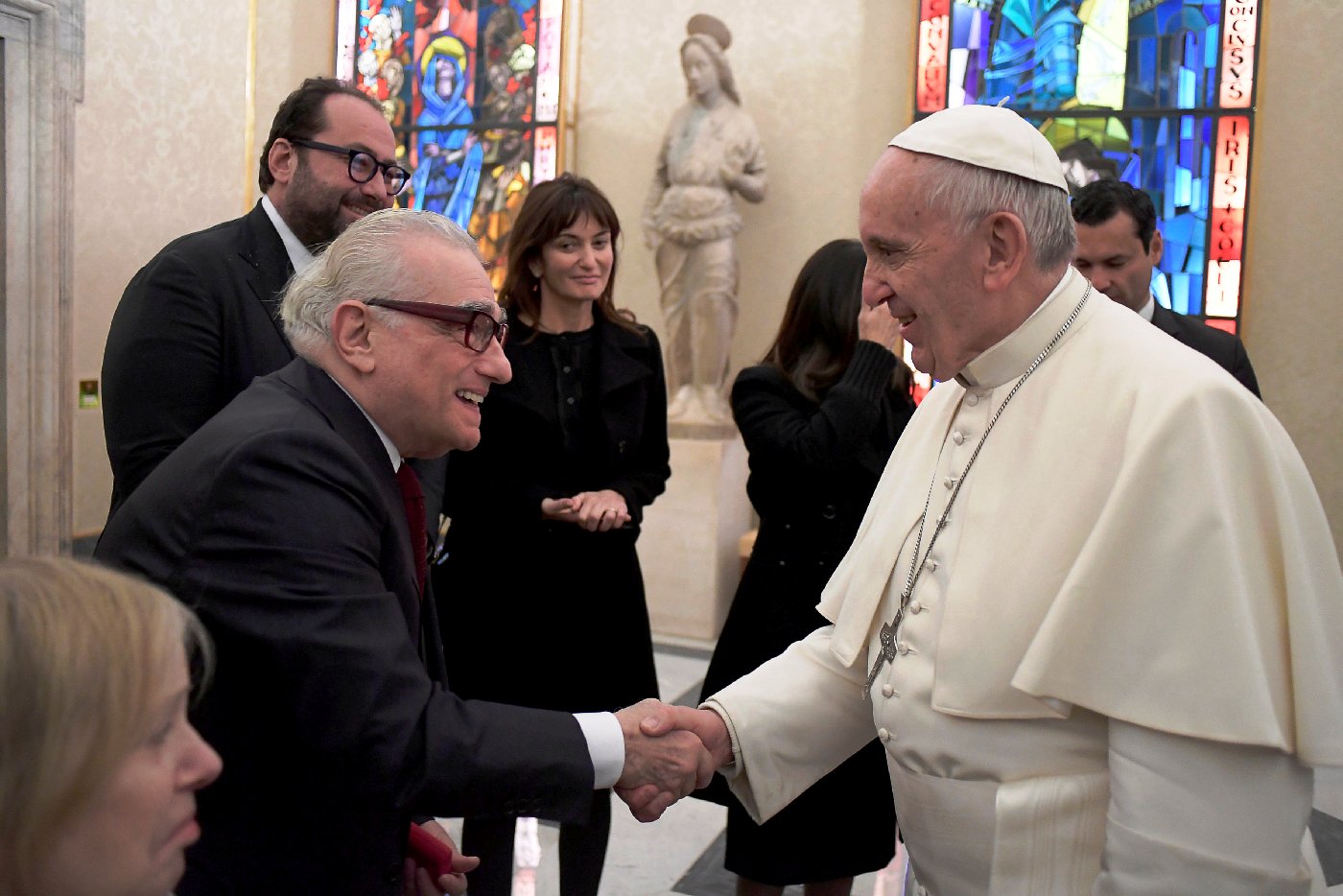 The [theme of the book is] our existence and faith, a caring God or an aspect of our existence that we can’t explain scientifically—that yearning and a sense for a place in this universe, really, or a reason for being.

This goes way back to when I was very young and was influenced very much by the Catholic Church. Now, that’s to be separated from maturity of faith. What is the maturity of faith? I say how can one be sure there is nothing, when we have to discover so much still, in science and everything? How could be we be so certain?

Sankei: Can you describe the long journey this film took [from its original idea to the screen this year], why it took so long?

Scorsese: Back in 1990 I made a film called Goodfellas, and that did very well. [So I was asked,] “Do you have a pet project?” and I said, “Yes, I’d like to be able to do Silence,” and a deal was made at Cannes with the Italian production company, Cecchi Gori.

At that time I thought I could possibly approach the novel and try to write a screenplay. When I tried, I found I couldn’t, because I hadn’t gone through the journey. I hadn’t gone through the struggle. I was in the struggle about my own faith and about whether I have any or not, about what it means to give in, what it means to be weak and to begin again, to be strong, to deal with one’s own weakness. The whole concept ultimately of Rodriguez as a character, giving up his faith to gain his faith, the true faith—this is something I don’t think I knew how to… how should I even put it? Not “visualize.” It’s a matter of what the journey is, what to show.

In the meantime, one of the most extraordinarily complicated legal battles occurred and [there were] all kinds of problems with the Italian distributors. This situation was only resolved when we started production last year.

Sankei: You wrote in the introduction to the English translation of the novel that it has given you a kind of sustenance that you have found in only a very few works of art.

Scorsese: I think the sustenance has to do with the ability to be resilient, to be able to absorb the blows of life, the difficult times, the tragedies, and to be able to rise again. I think this is what’s really at the core of what Endo writes about.

Sankei: What are your impressions of the Japanese actors you worked with, such as Tadanobu Asano as the interpreter for the priest and Yosuke Kubozuka as Kichijiro?

Scorsese: Yosuke, Asano, Issei Ogata, who plays Inoue, and Shinya Tsukamoto, who is a great filmmaker and a wonderful actor. Yoshi Oida is very, very interesting. About 82 years old. He had more energy than everybody on the set!

They were sort of the bedrock of the movie. I knew that I could depend on them and that they were there—not saying the others were not, but with those actors, I was able not only to get what I needed from the page of the script, but also much, much more, and very often very subtly too.

It’s the expression in their eyes which changed the size of the frame for me. Should I be closer? Can they still get [that] same powerful emotion if I’m a little looser in frame? And I and my editor, Thelma [Schoonmaker], are in there, and every now and then with Asano, he just does one move with his eyes and we both look and we say, “Oh, he’s terrific. Look at that! Watch what Yosuke does.”

There is an extraordinary confidence that I found, a seriousness of being there, being in the role, [even] under the worst circumstances. The locations were very hard, particularly for me, a New Yorker. I’m allergic to everything. I’ve had terrible asthma since I was three years old, so for me this was quite an excursion.

But no matter where we were, whether it was a rocky sea coast, waves hitting people, earthquakes, these actors were an extraordinary support. Plus the depth of their acting, the levels they could hit.

Sankei: It must have been quite an experience to work with Akira Kurosawa in Dreams. What do you remember about it?

Scorsese: I had met him when he was here for the New York Film Festival. At that time I was starting a campaign [out of concern for] color fading in film. I wanted all these filmmakers around the world to make a change and be aware of the history, preservation, and restoration [of film]. So I got ten minutes to speak to [Kurosawa].

They said, “You can speak to him for ten minutes.” He was in this hotel. I walked in and Akira Kurosawa took his watch off, put it down and said, “Talk,” and I talked fast—faster than I’m talking now, much faster—and I was explaining this whole thing, how all our cinema’s going to be destroyed. And then he said, “Ten minutes are up. I will consider putting my name on this.” I said, “All right,” and that was it. I thanked him very much, left.

Then he saw Raging Bull about four months later and he sent me a telegram saying, “I saw your film, I like it, I will put my name on this.” Some years later, he was talking to Francis [Ford] Coppola and he said, “You know, I want somebody to play Van Gogh. I like that guy Scorsese, he had his eyes—he was just so manic when he spoke to me that time about film preservation. Do you think he would do it?” And Francis said, “Sure, call him up.” So he wrote me this beautiful letter, and what could I say? I told him I would try it.

He sent me the script and I remember I was in my trailer doing Goodfellas. In between long takes, I’d be memorizing this script. The worst part was that he started shooting Dreams and I was late on my film, so he was waiting for me and that was a bit nerve-wracking.

Finally, at the end of August, 1989, we [went] over to Japan and [Kurosawa] met us in Hokkaido. He was wonderful. We did makeup tests in this place that’s… famous for a prison?

We did an extraordinary three-hour makeup job. We rehearsed one day and the next day was a typhoon and we couldn’t shoot, so the day after we did shoot. But what I noticed was that we had to do the scene from beginning to end, four pages, no cuts. Which was all right, but what he did was he had the camera tracking horizontally this way, and this way on the side, so that you never knew with the long lenses and zooming whether you were in close-up or not. This way you could just do what you had to do.

But it was very interesting because in the rehearsal I asked him, “How should I move?” He said, “Well, you move as you want, you know?” I said, “OK.”

So I did. And then afterwards he said it was very good. [But then he] said, “However, when you move from this position to that, do not go there, go here. Then when you go from there to there, do not do that, do this, and when you draw the picture, take the page and turn it around and put it on the bottom of the pad that you’re drawing on.” I said, “OK.” “Then you take two steps to your left. Do not go back.” I said, “OK, I take two steps left.” “And then you draw another picture, and you don’t like that one either.” I said, “And then I turn that over?” “No, that one you tear off.” I said, “OK.” It went on like that.

What he did with body language was extraordinary and I didn’t know if I could ever memorize it. “You better do it,” I figured. I don’t know if I performed well, but I know I hit those areas and those marks [that] he memorized very, very carefully.

We did three takes and I thought I made a mistake in one of the lines. [Kurosawa] was sitting back there. He didn’t say anything, he was just sitting. I asked the producer, “You know, I think I did one line incorrectly. Could I do another take?” They went, there was a lot of discussion, then they came back and they said, “Sensei says you can do one more take, but say the right line.”

His Relationship with Japan

Sankei: Does receiving the Praemium Imperiale have any special meaning for you?

Scorsese: Yes, it does. I was introduced to Japanese culture by Japanese cinema. Don’t forget that it was not necessarily [Kenji] Mizoguchi but Kurosawa, and then [Yasujiro] Ozu, the new wave of [Nagisa] Oshima, [Shohei] Imamura, [Masahiro] Shinoda. All of this was a new way of seeing life, a fascination with the culture and with the way of thinking about life. I only became kind of aware [of it] over the years.

I began to really appreciate our place with nature by being in Japan over the past 30 years. On a tour of Kyoto in 1989, we thought we were going to see the Temple of the Golden Pavilion, which we did, but the tour guide was more interested in showing us the trees. And then I saw the gardens, the rock gardens. This is a way of living with life and nature, which for me is very spiritual, something that I need to be a part of me every day. I find it by being in Japan, but also watching Japanese films.

The night my daughter was born, I came home and put on Ozu, I Was Born. There is something about the simplicity, the beauty, the rigor of the framing that gives me another dimension in life. I don’t know if I’ll ever fully understand. I don’t need to, I could just try to enjoy it and try to learn from it, or live with it. So for me to receive this recognition from Japan is something that is really overwhelming and very touching.