The Men of Koiyama: Keeping the Gion Festival Tradition for the Next Generation 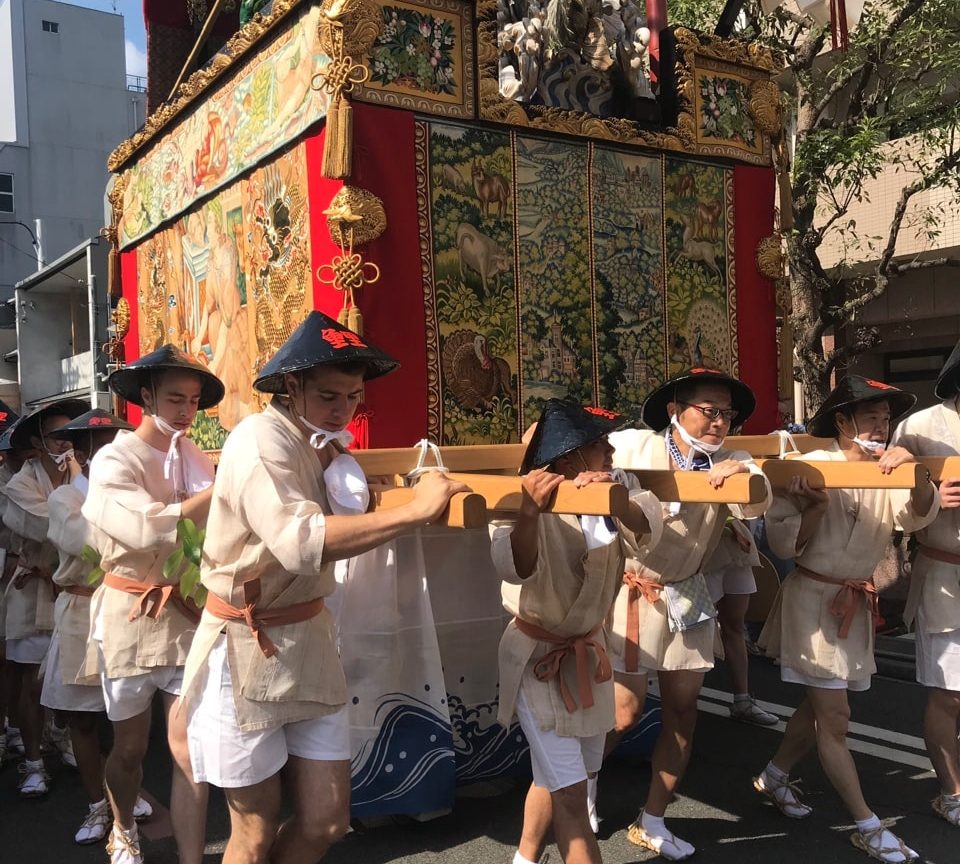 These are the confident words of Kojiro Yoshida, former chief director of the Gion Festival Yamahoko Association. For many years, he has been a leading figure in festival proceedings, including the Yamahoko Junko procession, the highlight event that has been cancelled this year due to the coronavirus pandemic.

Mr. Yoshida being a Kyoto native (b. 1937), raised in the historic Kita Kannon Yama neighborhood, the Gion Festival has always been a part of his life. In 5th grade, he became a Gion Festival hayashikata (instrument player). Today, he is an art collector, artist, researcher, and teacher dedicated to sharing about Kyoto culture. Speaking from personal experience, his words reflect the deep connection of many Kyoto locals to the festival.

Today, his large family home, a 110-year-old machiya (traditional wooden townhouse) named Mumeisha, acts not only as the main location for Yoshida’s preservation activities, but also as a visual representation of living Kyoto culture. 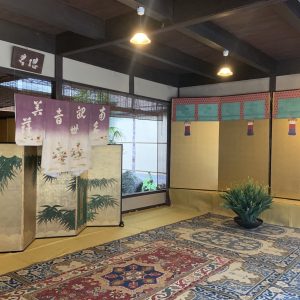 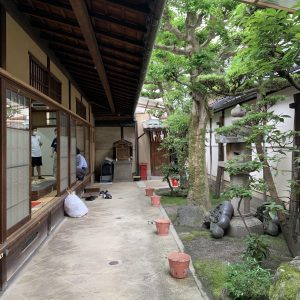 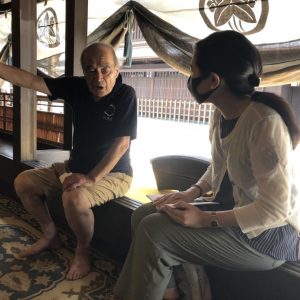 As we sat in front of his prized collection of folding screens on display during the Gion Matsuri’s Byobu (folding screen) Festival, he posed questions that stressed the importance of absorbing, questioning, and experiencing the festival, instead of just passively skimming the surface:

We must ask ourselves, what is seen, what is felt, what aspect of this pre-Edo period culture might be a point of fascination?

It would not be an overstatement to say that, because of association leaders like Mr. Yoshida and the chonai (the neighborhood association), the 1,150-year-old tradition of the Gion Festival has continued into the 21st century as a source of anticipation, excitement, and peace.

What must be thought about is how to continue respecting the tradition while passing it on to the next generation. 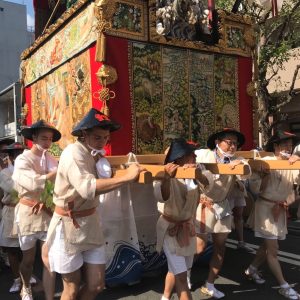 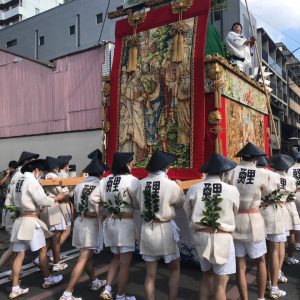 Masayoshi Saito, a Koiyama resident, was born and raised in Kyoto. He reflected back on early memories:

I loved the Gion Festival as a child! I loved the atmosphere of it. It wasn’t loud and hectic, but a quiet, peaceful festival.

Along with the background rhythms of the ohayashi, he remembered seeing the Yamahoko Junko floats with his father in the scorching heat and the splendid folding screens displayed in homes for the byoubu (folding screen) festival:

There were festival stalls in the neighborhood for the children. They were selling insects like kabutomushi (a type of beetle), water-filled balloon yoyos, and little bonsai-like potted plants where you could choose the seeds for the plant you wanted to grow. I would always ask for the bugs. It was festive, but a calming ambience that was not at all over-stimulating.

His subtle memories fondly illustrated a local summer festival that had gradually evolved into a much more elaborate attraction, pivoting towards the attention of tourists, nationally and internationally. 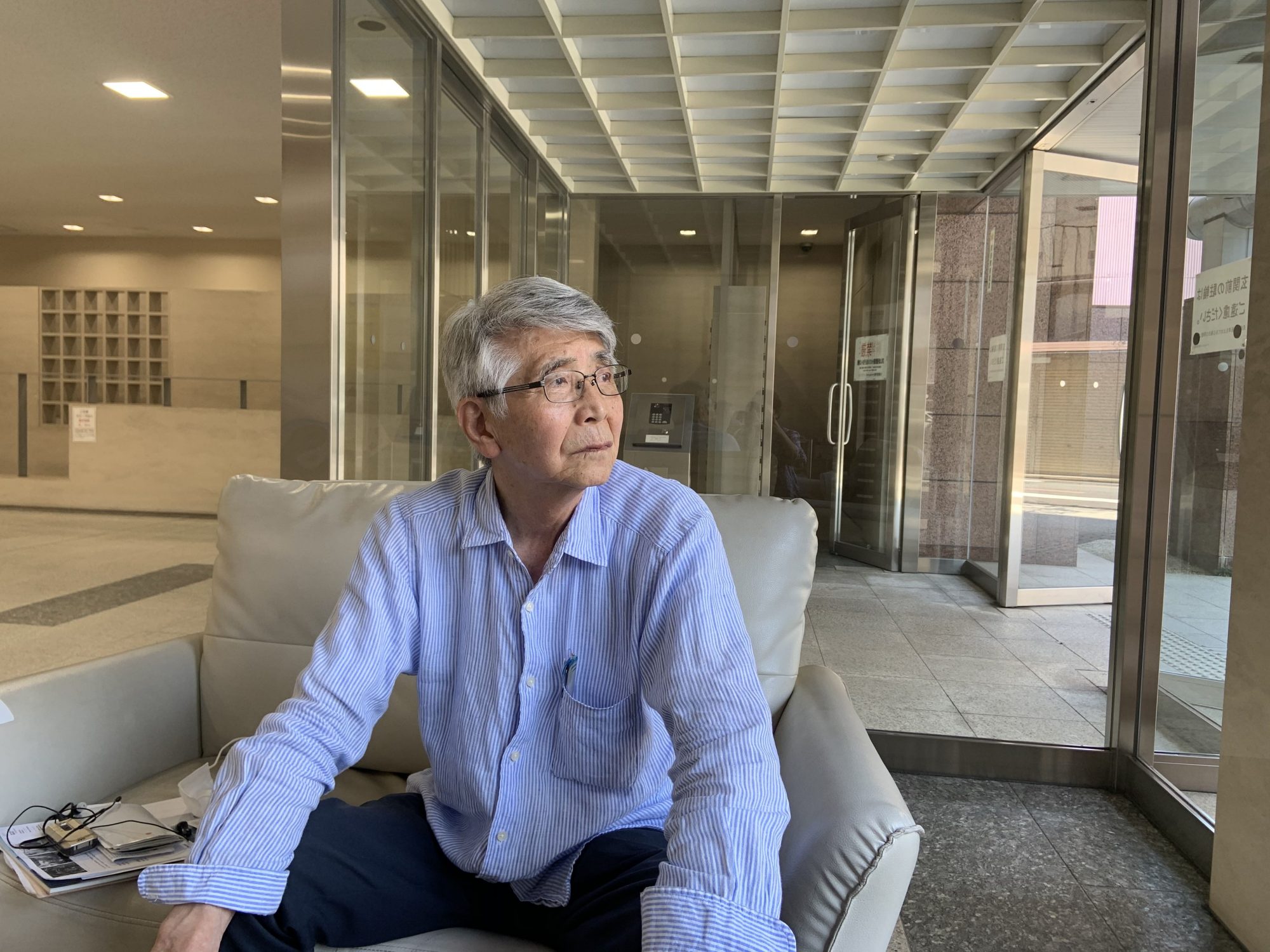 For Yoshiaki Tahara, a local resident born and raised in the Koiyama neighborhood, the festival had always been a part of life:

The Gion Festival is generally for adults. It is a sacred festival for the gods, and not an energetic, noisy gathering just for children. However, I do remember climbing the yama float like a jungle gym as a young child. That is definitely not allowed anymore!

Over the years, different aspects of the festival stood out in his memory:

The Junko for the Ato-Matsuri (later festival) is on July 24. In middle school, that was when I had final tests. I could hear the ohayashi music from everywhere while studying, and it was so hard to focus. So I’d go someplace, to my friend’s house who lived further north! There was a time like that. The ohayashi was heard very clearly everywhere around here.

The Koiyama neighborhood, centrally positioned with many prosperous families in the wholesale kimono business, came into existence around 1429. It is named after its Gion Festival float, Koiyama, featuring a large wooden koi (carp) that is said to be carved by the legendary early Edo sculptor, Hidari Jingoro. 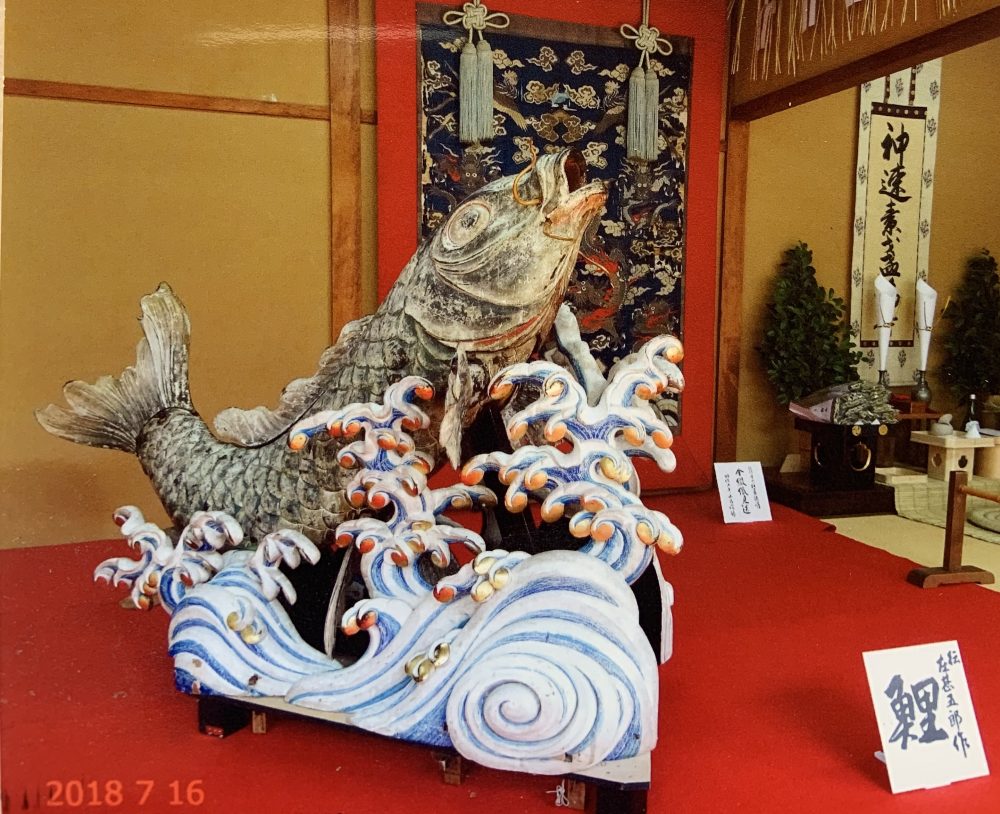 Mr. Tahara fervently explained the miraculous rescue of Koiyama’s treasures during the Hamaguri Gate Rebellion, a bloody event in 1864:

The storehouse was burned down but the koi statue and tapestries were put on a jinrikisha (rickshaw) and evacuated to the south. All of the other decorations were destroyed in the fires.

Stories of the Koiyama carp’s magnificent survival carries into the theme of the Koiyama float itself, touryumon, translated to “gateway to success.” It is based on the Chinese legend of a koi climbing up a waterfall and miraculously transforming into a dragon. The koi symbolizes strength and faith in overcoming challenges to reach new heights and goals. 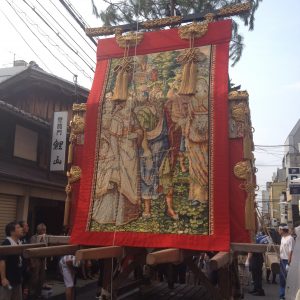 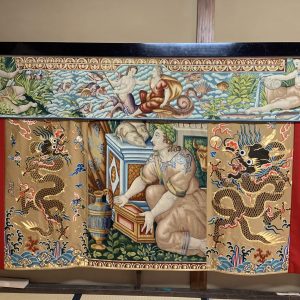 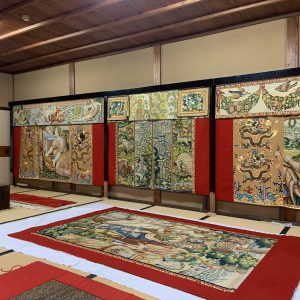 Koiyama is also known for the elaborate tapestries that are wrapped around its float on the day of the Junko procession, among them 16th century textiles from Brussels, Belgium, that dynamically depicts a scene from the Iliad by Homer. Another set are 17th century textiles from China that depict fiercely expressive dragons, embroidered with lucent peacock feathers.

Naturally, the tangible presence of these treasures sheds light on the Gion Festival’s greater historical context and the weight of reverence and duty carried by members of the Koiyama neighborhood. 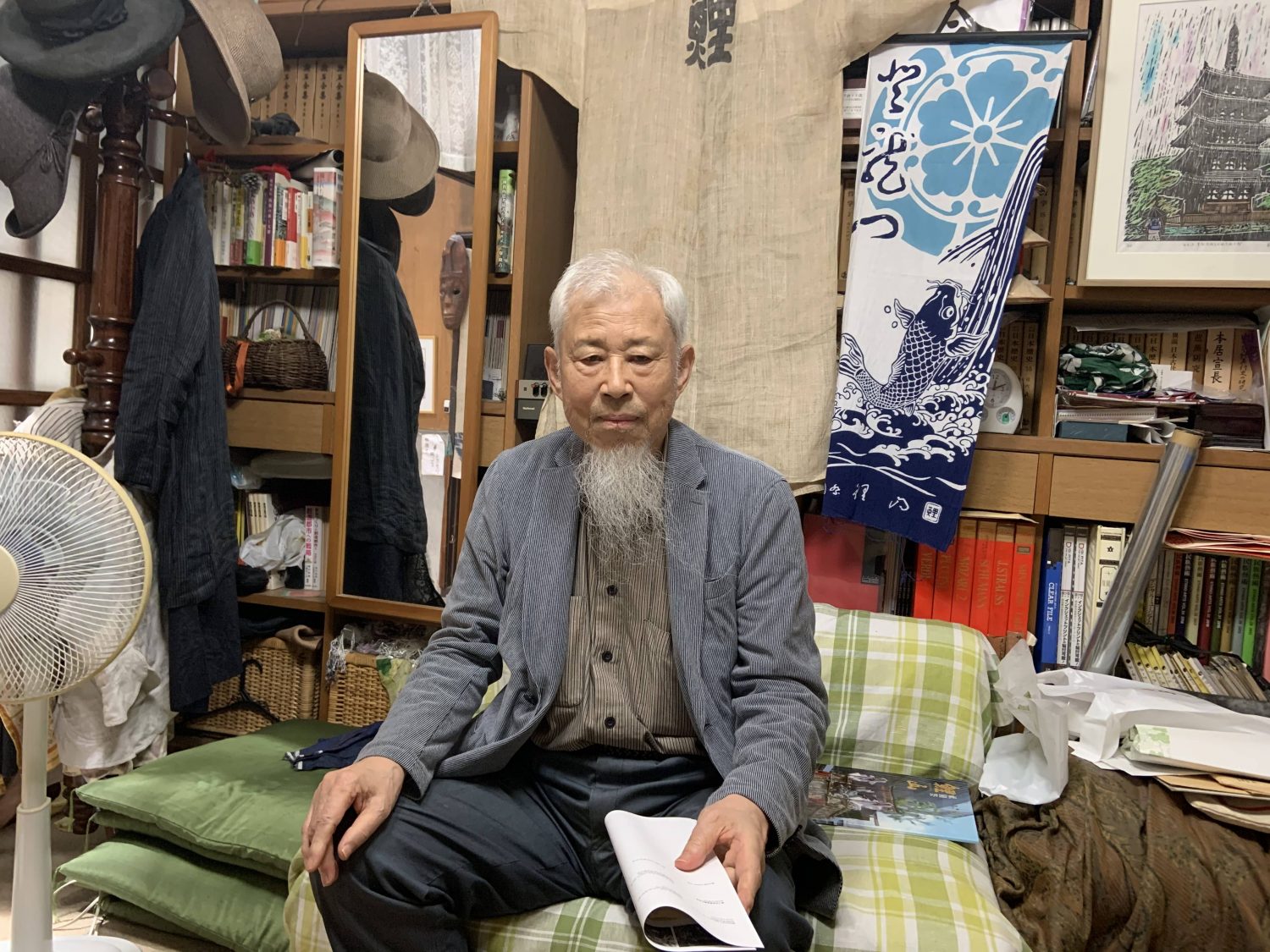 This festival has continued for hundreds of years and there is a strong sense of responsibility to carry on what the previous generations have continued. It can’t be stopped in our generation, it must at least be continued on to the next generation. In this way, I feel a great sense of duty and joy.

As it became clear through each conversation, the Koiyama residents may have been disappointed about this year’s changes due to the coronavirus. But before there was time to grieve, they moved forward, thinking about ways to adapt to this year’s limitations and preparations for next summer.

One Koiyama chonai individual put it into perspective, saying, “Tradition is where you have to keep improving certain aspects in order to protect it.” He explained his optimism:

This year might be different, but the kimochi (feeling) is even more grand than usual. Despite these circumstances, we must look to the year ahead, use this year’s experiences, and think and pray about how to make it even more superb.

Mr. Tahara also carried this zeal as he spoke with confident urgency about the Gion Festival. His excitement was contagious, even amid this year’s situation:

Being involved in the Gion Festival, it is like when a craftsman or chef rejoices when a customer enjoys their product — that feeling. The quality of that product speaks for itself and reputation spreads by word of mouth, just as the significance of Koiyama spreads through the visitors and chimaki (charms).

Unwavering, the chonai’s endurance continues to push forth. 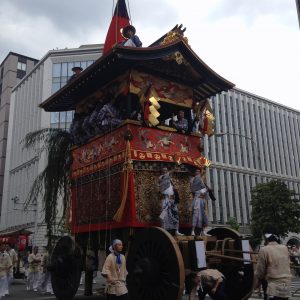 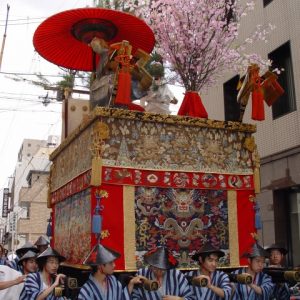 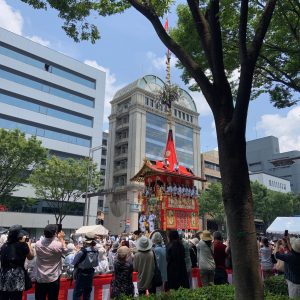 It is one’s lifework to be involved in the Gion Festival, and something each festival neighborhood takes on with great care, pride, and joy. 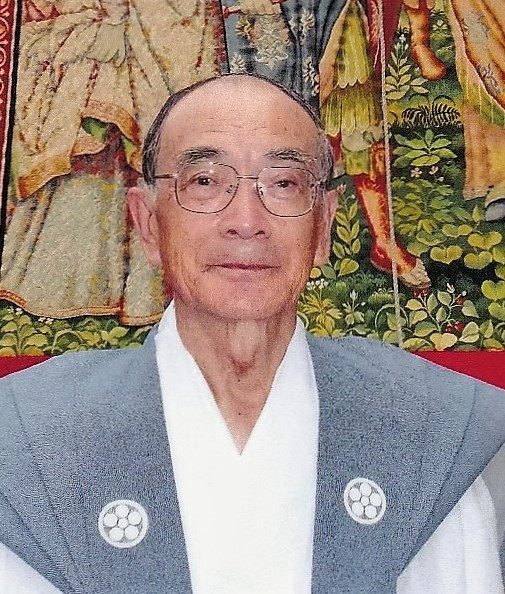 The 2020 festival changed to accommodate the precautionary measures required by COVID-19, but as Matasaburo Akai, a long-time Koiyama resident, commented:

This year will be a historical moment, offering a time to think about how to continue the tradition into the next year.

Mr. Akai had taken this year’s opportunity to observe other neighborhood preservation associations and see what kinds of coping methods they are incorporating.

Up until this year, we have always been very busy with festival preparations. Without the usual business, there is time to deliberately think about practices and routines that we took for granted. What shall next year look like? In various ways, this year is an opportunity to reassess.

Mr. Tahara pointed out that, in the larger picture, continuity would be key:

It is clear that even in the midst of a year marked by coronavirus, Kyoto is vividly colored with the past, present, and future of the Gion Festival and its prayers for another year of peace and protection.

Author’s Note: Thank you to all of the individuals named and unnamed, who were more than willing to share about the Gion Festival with me.

Mariko Azuma completed an MA in art history at the University of Utah. With a broad interest in the interdisciplinary humanities, her particular research focuses on the preservation of Japanese vernacular architecture and the related concepts of heritage and authenticity.