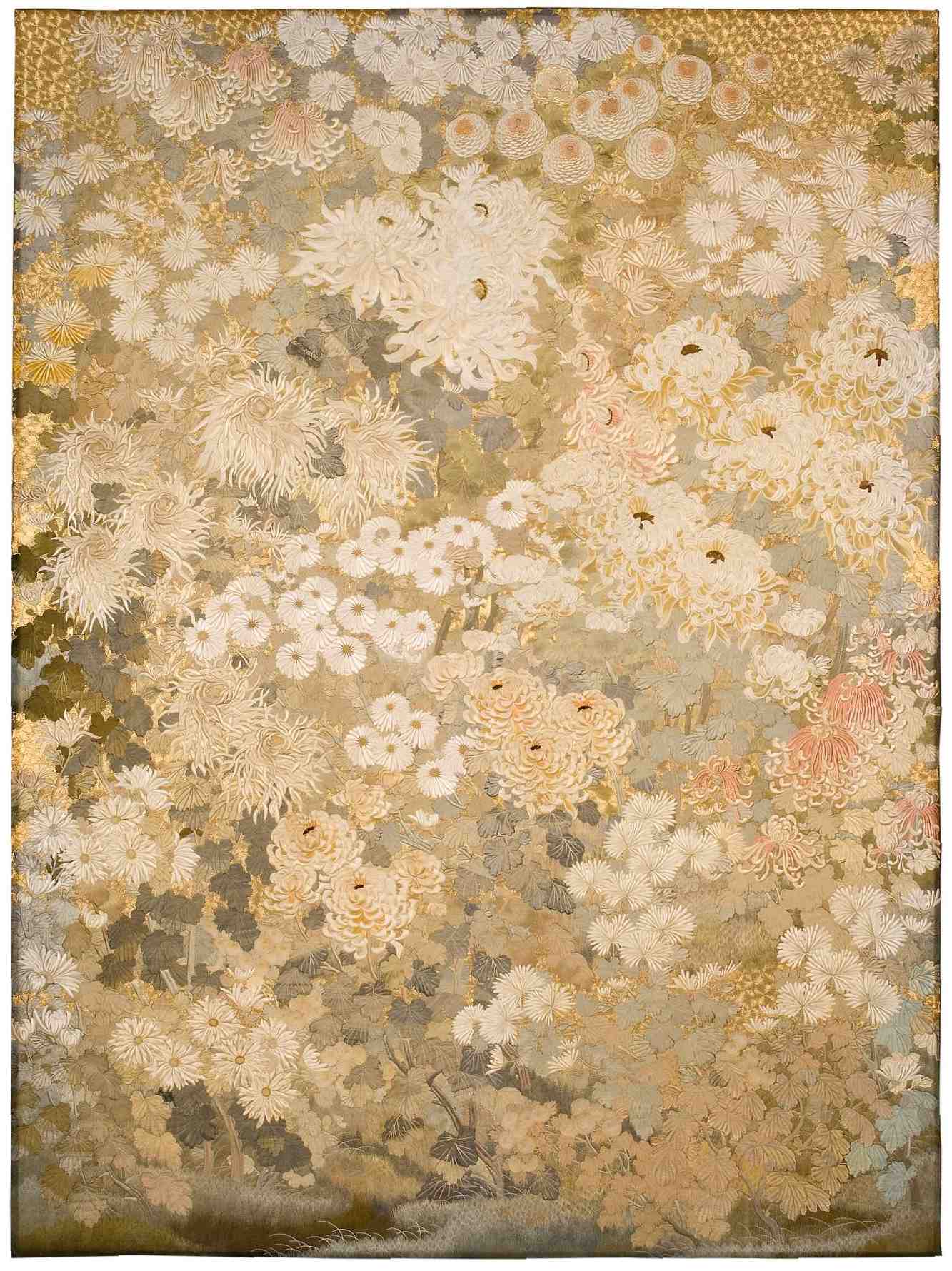 In an English palace, a Japanese embroidered tapestry lies in obscurity. With an array of chrysanthemums elaborately embroidered on its entirety, this enormous tapestry — over two meters tall and well over a meter and a half wide — is thought to have been a gift from the imperial family.

The tapestry is believed to have been created during the Meiji era as it exhibits the exceptional craftsmanship of the time. With no record of the tapestry’s origin or history, though, experts are engaged in research to uncover the sequence of events that brought this work to England.

The tapestry is in the possession of the Royal School of Needlework (RSN), which is located in Hampton Court Palace, southwest of London. The large work is displayed in a frame along a hallway of the school. Embroidery artist Emi Nimura, currently the coordinator for RSN’s Japan school, first became interested in the work when studying at RSN roughly 20 years ago.

“I had absolutely no interest in Japanese embroidery at the time,” Nimura recalled. “But on my very first day at the school, I walked in and the first thing I saw was this work. Intuitively, I knew it was Japanese, and it made a huge impression on me. It was like the artist who created it long, long ago was telling me, ‘Don’t forget you are Japanese.’”

Unable to shake this vivid impression, Nimura began looking into the origin of the work after graduation. 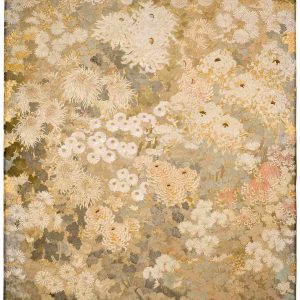 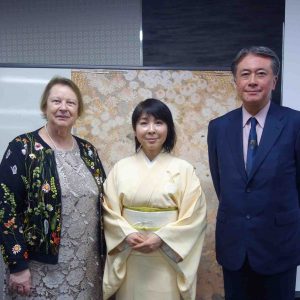 Mystery behind a Grand Japanese Embroidered Tapestry in an English Palace.

A Gift from the Imperial Family?

Nimura had heard the story passed down at the school that the tapestry was “made in the 19th century and gifted to the British royal family by Japan’s imperial family,” but no written record of the work’s origin remained.

From the work’s style, Nimura inferred that the tapestry was Japanese and created for export during the Meiji period. Nimura explained: “The artistic community and embroidery artisans that developed in modern times in Kyoto looked to overseas markets to sell their works after the feudal lords, temples, and shrines that had served as their patrons fell into decline following the Meiji Restoration.

“Leading painters of the time, like Seiho Takeuchi, would create the design to be embroidered. Combining techniques honed by masters since the Edo period, amazing embroidered tapestries were created during this period with a level of skill that had never been seen before and has not been seen since.”

Upon showing a photo of the tapestry to an expert on embroidery of the time, Nimura was told that, “based on the work’s size and elaborate detail, it was likely created between the years 1887 and 1897 of the Meiji period, a golden age for embroidery tapestries.”

Nimura presented her findings at a lecture commemorating the visit to Japan of Susan Kay-Williams, chief executive of the Royal School of Needlework, held at the NHK Culture Center in Aoyama (Minato Ward, Tokyo) in January.

Professor Naotaka Kimizuka of Kanto Gakuin University, an expert in the British royal family, also took the podium to explain how exchanges between the two royal families had intensified during the Meiji era. Citing the example of a folding embroidered screen gifted to Edward VII upon his coronation in 1902, Kimizuka presented his view that the tapestry was a gift related to an auspicious event in the British royal family.

“Such a large work like this one would not be presented on a routine occasion. It could have been a gift to commemorate a birth in the royal family, a coronation, or as a gift in return for the conferment of the Order of the Garter,” Kimizuka explained.

Nimura was told by an older person associated with the school that the tapestry was sent to the school from the royal family in the early 1950s. The timing is thought to coincide with the passing of Queen Mary (1867-1953), wife of King George V (r. 1910-1936), who was known for her appreciation of embroidery and had herself purchased embroidery screens from Japan. Nimura intends to continue her research and will make enquiries to the Royal Archives in the United Kingdom.