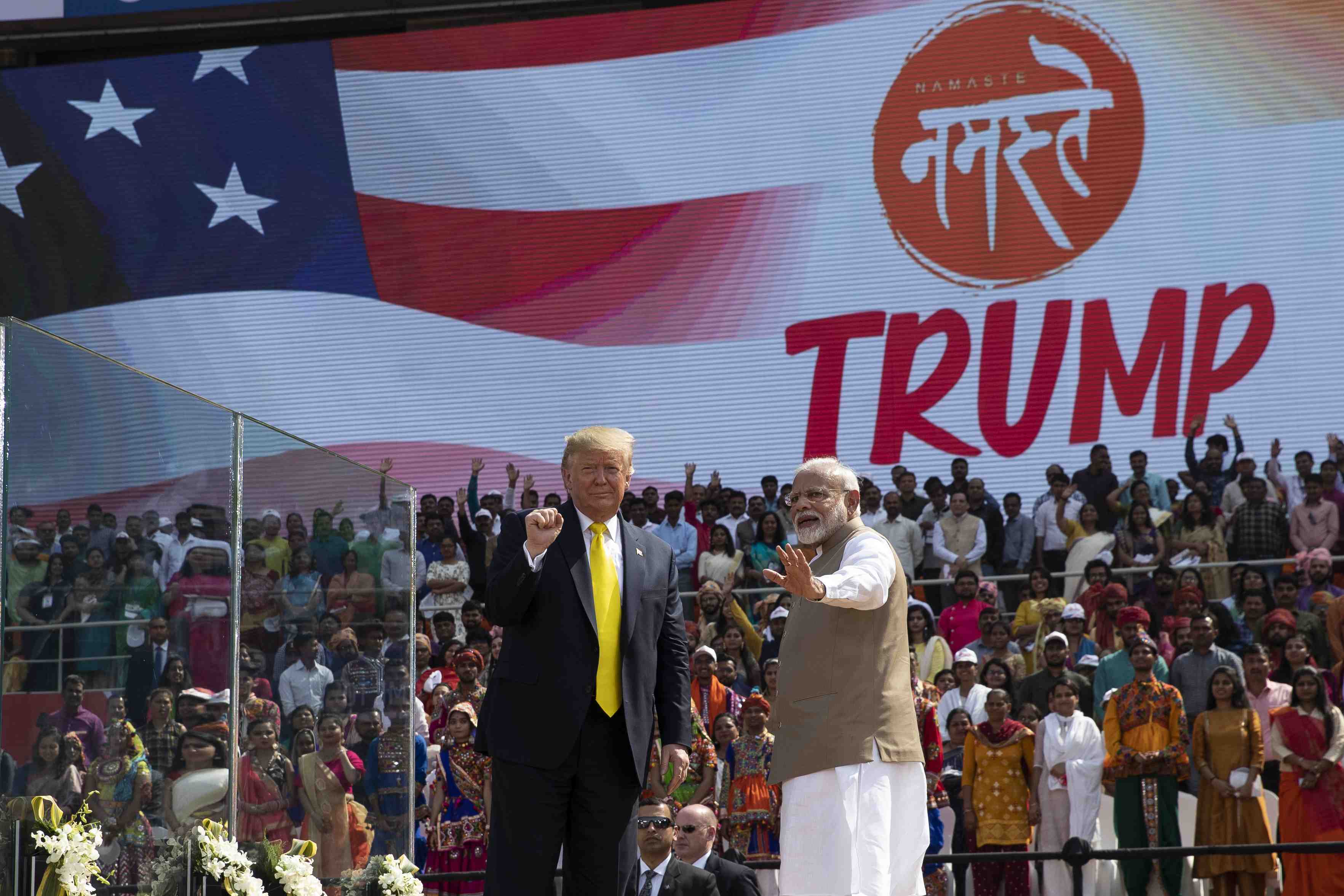 When United States President Donald Trump thundered “America loves India, respects India” before a crowd of 125,000 at the world’s biggest cricket stadium in Gujarat in the presence of Indian Prime Minister Narendra Modi in February, it marked a new era in the ties between the world’s oldest and biggest democracies.

So what do the improving Indo-U.S. ties mean for Japan, Washington’s closest ally in Asia?

India and the U.S. had a now-on-now-off relationship until the end of the Cold War. When the erstwhile Soviet Union broke up, it led to a big upheaval in Indian foreign policy.

It is worth mentioning that the relations between India and Japan have improved considerably in the last couple of years. Japan and India, along with the U.S., are part of the trilateral Malabar naval exercises, and there is also a dialogue between the three sides which has been ongoing since December 2011.

Where Can the 3 Join Hands?

First, the growing emphasis on the Indo-Pacific by both the U.S. and Japan is one of the reasons why both of them are looking up to India in a manner like never before.

Japan’s “Free and Open Indo-Pacific Vision” gels well with India’s “Act-East Policy.” Under the Trump administration, the U.S. has increased Freedom of Navigation Operations (FONOPs) in the Indo-Pacific. The U.S. has also sent naval and coast guard ships through the Taiwan Strait in an unmistakable show of strength, aimed at China.

Second, the joint statement released during Trump’s visit talks about the “Blue Dot Network, a multi-stakeholder initiative that will bring governments, the private sector, and civil society together to promote high-quality trusted standards for global infrastructure development.”

This is significant since India and the United States are among the few major countries that have taken an open stand against the China-led Belt and Road Initiative (BRI).

It should be noted here that Japan has taken an ambiguous position on the BRI, and has even sent senior Liberal Democratic Party member Toshihiro Nikai to China’s BRI conference in 2017.

India, Japan, and the U.S. can pool their resources in the field of infrastructure. This is already happening in Sri Lanka, where India and Japan have joined hands to operate the East Container Terminal at the Port of Colombo, in collaboration with the Sri Lanka Port Authority (SLPA). This is a different approach from the Chinese model of investment, as seen in Hambantota, Sri Lanka, where the port (and 15,000 acres of land) had to be leased out to China for 99 years when Colombo failed to repay its debt to Beijing.

Third, there is another aspect of India-U.S. ties which is bringing the three countries together. This is in the field of interoperability of their defense forces. Given that India is buying more and more U.S.-made weaponry, this is something that will bring the countries closer. During President Trump’s visit, India and the U.S. signed a $3-billion USD deal for American military hardware, which includes the U.S.-made Apache and MH-60R helicopters.

Fourth, another area of cooperation could be in the field of space exploration, where the United States’ NASA, India’s ISRO and Japan’s JAXA are global leaders. India’s space agency ISRO and the American NASA are already collaborating on many projects, such as a joint satellite mission called NISAR (NASA ISRO Synthetic Aperture Radar) for earth science studies.

Separately, New Delhi and Tokyo are working towards a lunar polar mission by 2023, which will explore the polar region of the moon. At the same time, the U.S. is looking at landing two astronauts on the lunar surface by 2024 through its Artemis mission. Hence, there is great possibility for the three sides to work together on lunar missions.

Fifth, maritime security provides another opportunity for cooperation between the three sides, given their respective strengths in this domain. This includes both traditional and non-traditional security threats. Japan has dispatched JMSDF personnel to Djibouti in order to ensure freedom of navigation in the region, and also for anti-piracy operations. Here, too, the role of the Indian Navy would be crucial, as it has one of the biggest physical presence in the region.

Sixth, nuclear energy could be yet another area of cooperation, especially given the fact that both the U.S. and Japan have signed civilian nuclear deals with India. Japan is a global leader in nuclear power generation and there is plenty to learn from the Japanese experience in this field.

Time to Push the Envelope

Nevertheless, real and potential areas of difference remain in some areas. One of them could be India’s ties with Iran, and then New Delhi’s ties with Moscow.

It is worth noting that New Delhi has stopped importing crude oil from Iran in the wake of American sanctions, while ties with Moscow are mainly in the military realm. Here, too, India is making a conscious attempt to reduce its arms imports from Russia by looking at a host of countries, like Israel, France, besides of course the United States.

Be that as it may, President Trump’s India visit has definitely pushed the envelope as far as India-U.S. ties are concerned.

There is tremendous scope for Japan to join hands with India and the U.S. in order to ensure a rules-based order in a Free and Open Indo-Pacific. This also means that the three countries would need to iron out their differences in the areas where they do not agree, and instead focus on those areas where they agree.

It’s therefore high time for India, Japan, and the U.S. to bite the bullet and forge a closer and coordinated path as their countries face critical choices in the Indo-Pacific.

Dr. Rupakjyoti Borah is a senior research fellow with the Japan Forum for Strategic Studies. His books include Act-East Via the Northeast: How Indias Northeast is Strengthening the Kizuna (Bond) Between India, Japan and ASEAN? (2019) and The Elephant and The Samurai: Why Japan Can Trust India and Act-East via the Northeast (2019). The views expressed here are personal. Twitter @rupakj.