The Rainbow Bridge to Odaiba: A Cinematic Journey 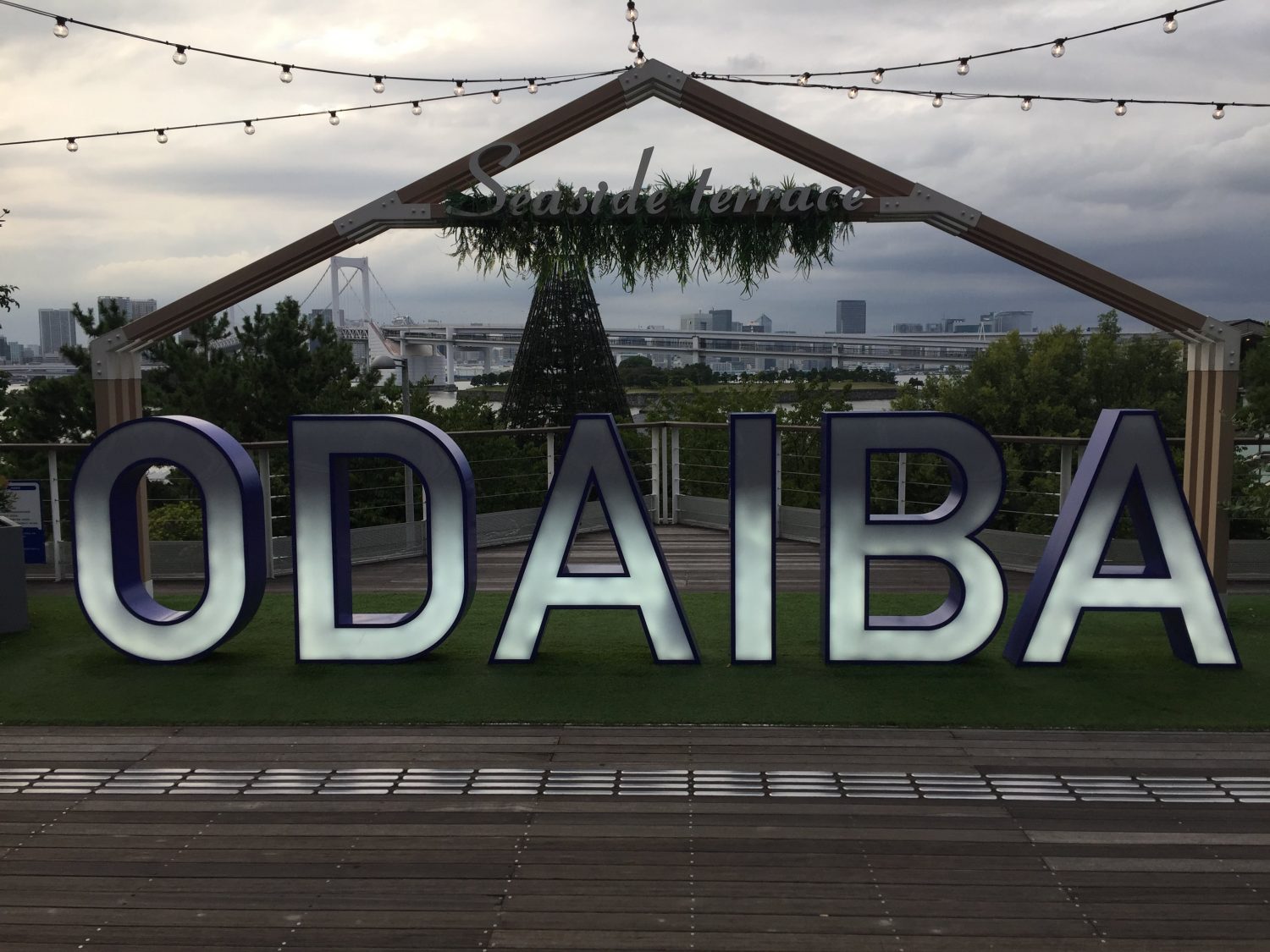 Evolving from an outcropping of man-made islands in Tokyo Bay constructed during the Edo-era, Odaiba is home to a beach, a rooftop skatepark, Fuji TV, museums, assorted other entertaining attractions, and a whole host of different shopping options. It is also home to some of the city’s greatest views.

Mount Fuji makes the odd appearance to the southーweather permitting. West across the water, the Tokyo cityscape of skyscrapers, Tokyo Tower, Tokyo Skytree, provides arguably the best photo opportunities the city has to offer. Particularly at dusk when the oranges and pinks of sunset melt over the bay.

A day out at Odaiba is therefore always a great deal of funーespecially one that stretches well into the evening, making good use of the numerous shorefront restaurants and bars. It really is a place for the whole family.

Yet, like all the best destinations, half the fun is in getting there. And the route to Odaiba is one of the most enjoyable around. 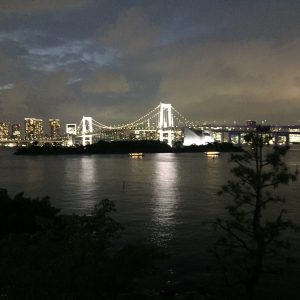 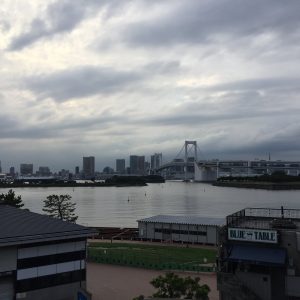 The waterfront at Odaiba connects to downtown Tokyo via the iconic Rainbow Bridge, best known this year as the beacon portraying the colors of COVID-19 warning levels designated by the metropolitan government. Completed in 1993, the bridge begins at the eastern Shimaura Pier. It then stretches the full 570 m width of Tokyo Bay.

Constructed of discrete white towers, the bridge melds into its surroundings during the day. Lit-up at night, it adds a further daisy-chain of twinkling lights to an already well-illumined cityscape.

The structure carries both the Shuto Expressway on its upper deck, and the Yurikamome rapid transit line at its center. Pedestrian walkways lie parallel to the transit line on either side.

Foreign film directors often use the bridge as a way of evoking the mood of the city.

In one of the most well-loved sequences in Sophia Coppola’s Lost in Translation (2003), the two principal characters take a taxi home after a night of karaoke.

Melancholy views of the subtly lit bridge accompany contrasting shots of neon Shinjuku. The contrast reflects the growing ambiguity of the characters’ relationship.

For pedants of Tokyo geography, the scene is frustrating. The characters stay at the Park Hyatt Hotel in Shinjuku. They return by taxi from a Karaoke-kan in neighboring Shibuya. A ten-minute journey somehow becomes a cross-city trek over the bridge to the other side of Tokyo Bay.

And while this may confound some viewers, the scene also demonstrates the importance of the Rainbow Bridge as an emblem of the city.

‘One Ticket to Tokyo, Please.’ 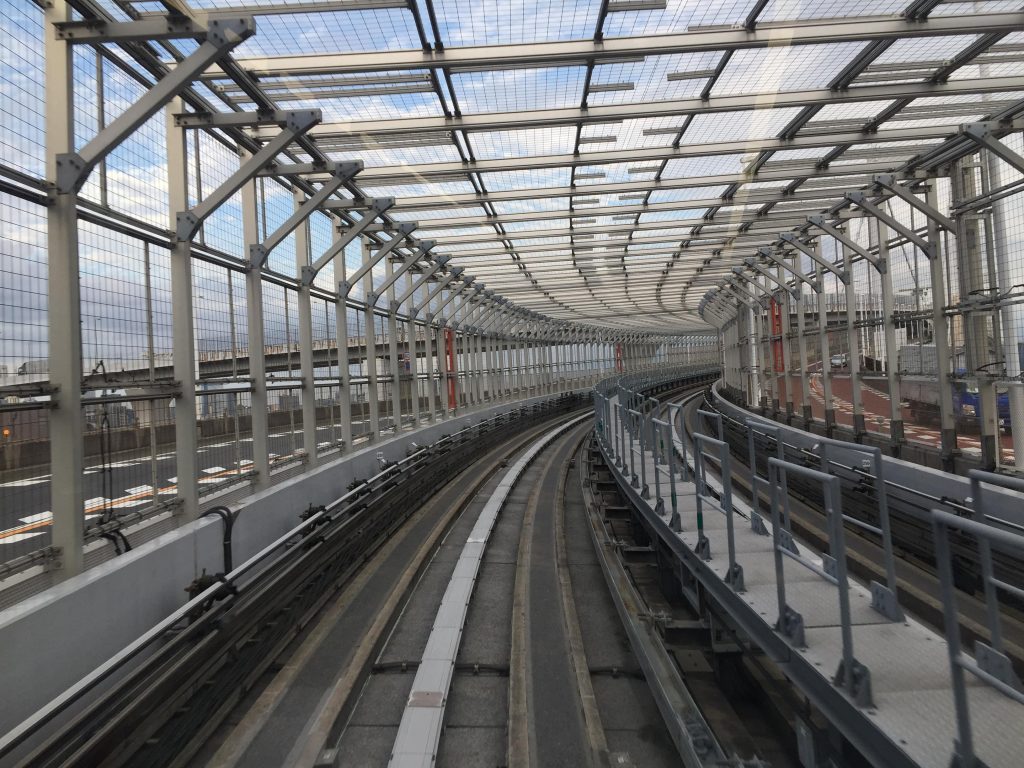 The Rainbow Bridge is a point also appreciated by east-Asia cinephile Quentin Tarantino.

The Bride (Uma Thurman) arrives in the Japanese capital from Okinawa. She comes in search of vengeance. Her only hand-luggage is the prized katana (samurai sword) with which she plans to smite her enemies.

In this unforgettable scene from Tarantino’s Kill Bill vol. 1 (also 2003), we follow The Bride’s descent by plane into Haneda airport. Nearby, her target – Yakuza leader, O-Ren Ishii (Lucy Liu) – crosses the Rainbow Bridge from Odaiba.

To a manic musical accompaniment of buzzing, wasp-like trumpets, we follow O-Ren and her entourage across the bridge and into the heart of the city.

We see the lights of Odaiba on the far side of Tokyo Bay. We see the shape of skyscrapers downtown.

Significantly, we see the city from the Rainbow Bridge itself.

These views of Tokyo are incredibly atmospheric. They create a mood of excitement. A feeling of urgency characteristic of the city.

Both Tarantino and Coppola chose to populate their films with images of the Rainbow Bridge as seen by car.

However, the most impressive way to enjoy the route over the bay towards Odaiba arrives courtesy of the Yurikamome rapid transit system (opened 1995).

The fully automated electric carriage runs along a designated concrete road, rather than a track.

The route begins in the heart of Tokyo’s historic shitamachi (downtown). From Shimbashi Station it ascends through the Shiodome skyscraper district, rising steadily towards Shimaura Pier.

Here the route rounds a 270-degree spiral ascent towards the Rainbow bridge.

On the other side of the bay beyond Odaiba, the carriage stops at the latter half of its 16 stations. This includes the final destination, Toyosu, and Shijo-mae, site of the relocated Tsukiji fish market.

Passengers may choose to sit aboard the Yurikamome right at the very front of the carriage. This offers unparalleled views of both Odaiba and the glinting glass skyscrapers of the business district.

The rubber wheels of the carriage make the ride unbelievably smooth, the perfect opportunity to take both pictures and record film.

The train carriage itself is run by computers. The road upon which it glides proceeds at a level above other forms of traffic.

The journey therefore feels extremely futuristic, like something from a sci-fi film. Think the hover cars of a film like Minority Report (2002) or the autonomous vehicles of The Fifth Element (1997).

Additionally, once the carriage rises to the level of the Rainbow Bridge, it becomes encased within the girders supporting the expressway above.

The play of light through the girders creates an interesting visual effect as the carriage crosses the bridge at speed.

A cinematographer’s dream, this descent into Odaiba via the Yurikamome line screams to be made into the opening shot of Tokyo’s next big blockbuster film.

A Fun Day Out

The route between Shimbashi and Odaiba costs 390 yen on the Yurikamome line. The futuristic journey lasts 26 minutes.

Once there, Odaiba is a fun destination bursting with activities for everyone to enjoy.

With such an enjoyable route across the Rainbow Bridge, why not ride Tokyo’s first fully automated electric transit system over the bay?

Just be sure to collect your commemorative stamp from the guards at either Toyosu or Shimbashi station.