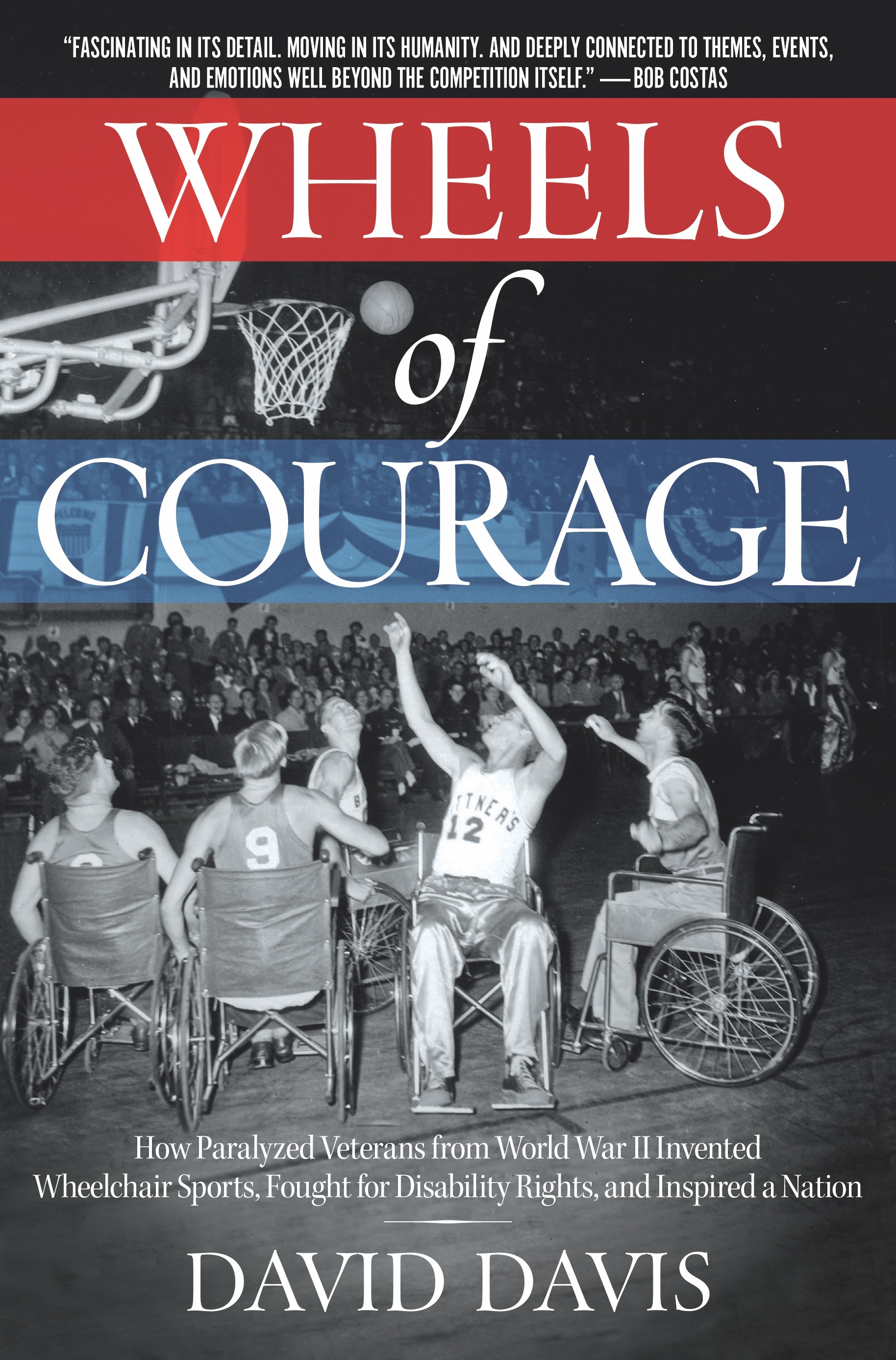 In an expansive undertaking, author David Davis investigates the history and evolution of the Paralympic Games through the prism of wheelchair basketball.

His new book, "Wheels of Courage: How Paralyzed Veterans from World War II Invented Wheelchair Sports, Fought for Disability Rights, and Inspired a Nation," tells the story of the wounded World War II veterans who were determined not to be defined solely by the labels and limitations that society placed on them.

"History has forgotten about the pioneering wheelchair athletes: the paralyzed veterans from World War II, both here and in England," Davis told JAPAN Forward's ODDS and EVENS in a recent interview.

These men showed the world that people with disabilities could play a healthy and exciting brand of sports, and along with their innovative doctors and caretakers they helped advance the cause of rehabilitative medicine.

Their efforts opened the gymnasium door to other individuals with disabilities, including women and youth, as well as those with other disabilities beyond paraplegia. Finally, through the Paralyzed Veterans of America, they were among the first individuals to lobby for disability rights for all individuals.

From the aftermath of the Second World War to the final decade of the 20th century, Davis' book, which was published in late August, illuminates the progress that was made.

It connects the past and the present, as well as the United States and Japan. Davis' voluminous research effectively spells it out in his 400-page tome.

He points out how American expatriate Justin Dart Jr., a former polo patient and Tupperware Japan president, was a central figure in the struggle for societal acceptance for people with disabilities. What's more, Dart witnessed the athletes' courage and spirited competition at the 1964 Tokyo Paralympics.

Davis picks up the story from here: "He [Dart] was so impressed by the athletes that he hired a U.S. Paralympian to move to Japan with his wife and coach Tupperware Japan's wheelchair basketball team."

But why was it so significant in Dart's life?

"The experience pushed Dart to become an advocate for those with disabilities," Davis related. "When he returned to the U.S., he became one of the most important figures in the fight for the passage of the Americans with Disabilities Act (ADA) of 1990. In fact, when President George H. W. Bush signed the ADA at the White House, next to him was none other than Justin Dart Jr. And for that you can thank the 1964 Tokyo Paralympics." 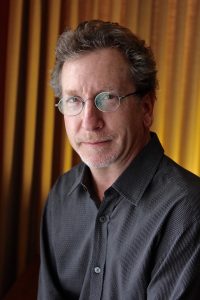 The Central Premise of 'Wheels of Courage'

In explaining the project, Davis, who was born and raised in New York City before relocating to Los Angeles in the 1980s, summed it up this way:

World War II veterans were the first group of paraplegics to survive their spinal-cord injuries, thanks to medical advances (sulfa drugs and penicillin) and the care of innovative doctors and physical therapists here and in England.

These veterans invented wheelchair basketball and took the sport on the road, including a memorable contest in Madison Square Garden in 1948. Along with their comrades in England, led by the indomitable Dr. Ludwig Guttmann, they helped invent the Paralympics. And, through the Paralyzed Veterans of America, they were among the first people to lobby for disability rights for veterans and civilians.

I tell this long-forgotten saga, yet another legacy of the Greatest Generation, through the words of the veterans and their doctors and caregivers. 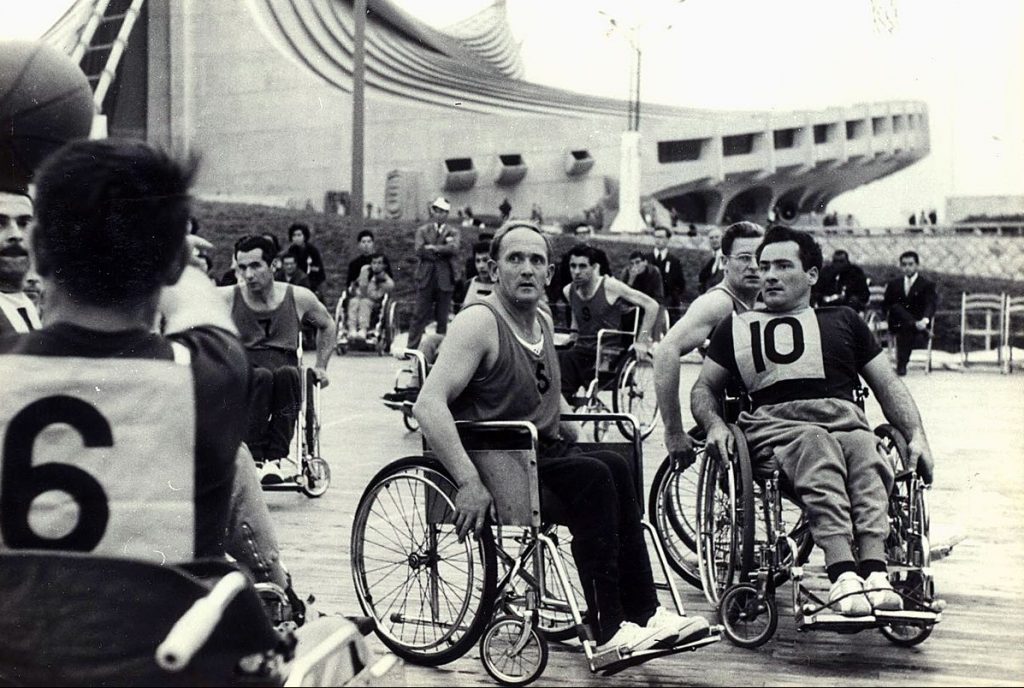 While preparing to read this book, I wanted to know a bit more about how it materialized, so I fired off an email to Davis.

In his thoughtful response, he explained why he devoted countless hours to a subject that very few people know anything about, a project that consumed four years of his life.

"When I was doing research for 'Waterman,' [a biography of Hawaiian surfer and Olympic swimming medalist Duke Kahanamoku], I ran across a reference to the Rolling Devils wheelchair basketball team from World War II," Davis told ODDS and EVENS.

Turns out, they were all paralyzed veterans from WWII who rehabbed at a Naval Hospital in Southern California and were one of the very first wheelchair basketball teams in existence. That piqued my interest in the topic, and I took the proverbial 'deep dive' into the origins of sport for people with disabilities. 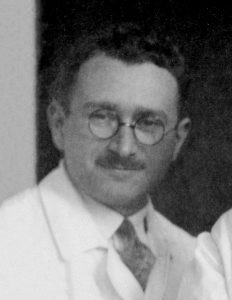 Dr. Ludwig Guttmann in an undated photo. CC BY 4.0

The Establishment of the Paralympics

Guttmann, a Jewish doctor, fled Nazi Germany in 1939 and settled in Britain, where his pioneering work planted the seeds for the Paralympics.

Five years after his arrival in the U.K., Guttman was appointed the head of the National Spinal Injuries Centre at Stoke Mandeville Hospital in Aylesbury, England, where injured servicemen were treated. Guttman advocated "the use of compulsory sport and physical activities as a form of rehabilitation, integration, and motivation," Paralympic.org reported.

As a result, wheelchair basketball, archery and netball became activities that he organized for physical rehabilitation for paralyzed veterans.

This trio of sports, Davis told WGVUnews.org in a September interview, "helped build up their chest, arm and shoulder muscles, which are vital for those who have lost the use of their legs."

One hospital's activities doesn't produce a globally recognized quadrennial event on its own, but Guttmann's vision began with the activities for his patients at the National Spinal Injuries Centre.

"He linked the Paralympics and the Olympics from the very beginning," Davis stated.

He organized the first Stoke Mandeville Games (the precursor to the Paralympics) on the very day as the opening ceremony of the 1948 London Olympics. And, in his speeches and his writing and in the trappings that he created around the Paralympics, he constantly linked the two. 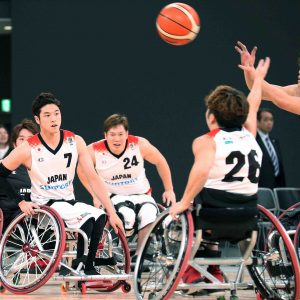 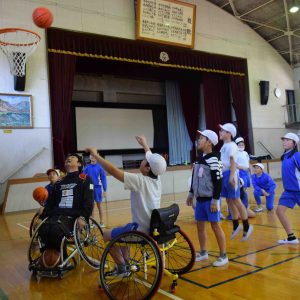 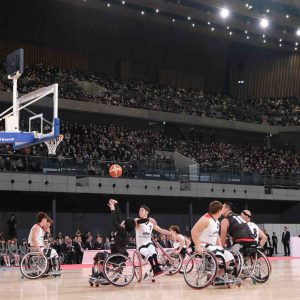 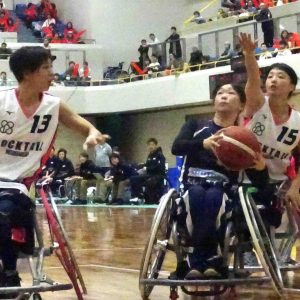 The growth of wheelchair basketball and sports activities for para-athletes, including in Japan (above: top left and bottom left) at Ariake Arena on February 2, 2020, is directly linked to Dr. Ludwig Guttmann's original vision for the Paralympics after World War II.

In Rome, a total of 400 athletes from 23 nations participated.

In Tokyo, at the event officially known as the 13th International Stoke Mandeville Games, it involved 375 athletes from 21 nations in November 1964. With approval from the International Committee, the event named Paralympic Tokyo 1964 was authorized, giving it a stamp of legitimacy.

What events did the athletes compete in Tokyo? Archery, dartchery (combining darts, bows and arrows and a dart board), snooker, swimming, table tennis, weightlifting, wheelchair basketball, wheelchair fencing, and track and field.

“For Guttmann and the world, Rome 1960 and Tokyo 1964 represented a giant leap forward," Davis told me. "For the first time, the Paralympics followed the Olympics in the same city, and it was readily apparent that the two competitions were not dissimilar.

The IOC formally adopted the name Paralympic Games in 1984, and then the International Paralympic Committee (IPC), which is based in Bonn, Germany, was established in 1989. Today, the IPC has 176 member nations. 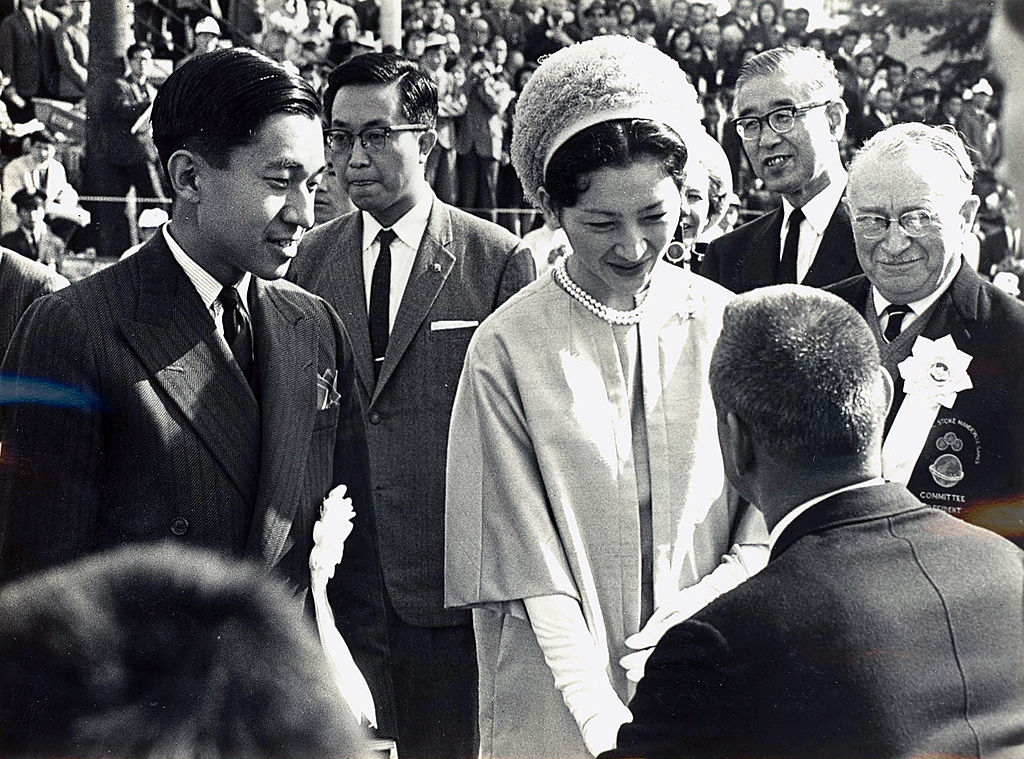 Crown Prince Akihito and Crown Princess Michiko greet representatives of teams during the Opening Ceremony of the 1964 Tokyo Paralympic Games. Dr. Ludwig Guttmann, the founder of the Paralympics, is seen in the background. CC-BY-SA 3.0

Spotlight on the 1964 Games

After the success of the Rome Paralympics, the Tokyo organizers four years later had something to build off of.

"Japan embraced the Paralympics and the athletes," Davis commented in an interview. "Historically, Japan had not been very progressive regarding the treatment of people with disabilities. But that was swept aside during the Paralympics. The athletes were treated with respect, and the competition went off smoothly with extensive media coverage."

The fact that the Japanese royal family participated in festivities certainly didn't hurt, with Crown Prince Akihito and Crown Princess Michiko attending a few events, including the Opening Ceremony, and spotted shaking hands with para-athletes.

The broader story of how the 1964 Paralympics bolstered the event and broad new awareness to para-athletes began, though, a few years earlier.

And it required changes to some rigid thinking. As Davis noted in his Tokyo chapter, "People with disabilities in Japan were treated as outcasts; many were hidden in institutions or confined to bed.

Which is why Dr. Yutaka Nakamura's visit to Stoke Mandeville Hospital in 1960 proved vital. During his three-month stay on a grant, Nakamura intently watched and learned how Guttmann's spinal-cord unit operated.

In 1961, Nakamura set up the Oita Prefecture Sports Games for the Physically Disabled, ushering in a new era in Japan with the first games of its kind here.

In 1962, Nakamura and two wheelchair athletes departed for England as Japan embarked on its first appearance in the Stoke Mandeville Games.

"Nakamura’s initiative encouraged Guttmann and his chief assistant, Joan Scruton, to broach the idea of Japan hosting the Paralympics with the country’s representative at the World Veterans Federation," wrote Davis, which led to support from the Japanese Red Cross Society and the government.

"A crucial piece to the puzzle fell into place when Crown Prince Akihito and his wife, Princess Michiko, threw their support behind the event." 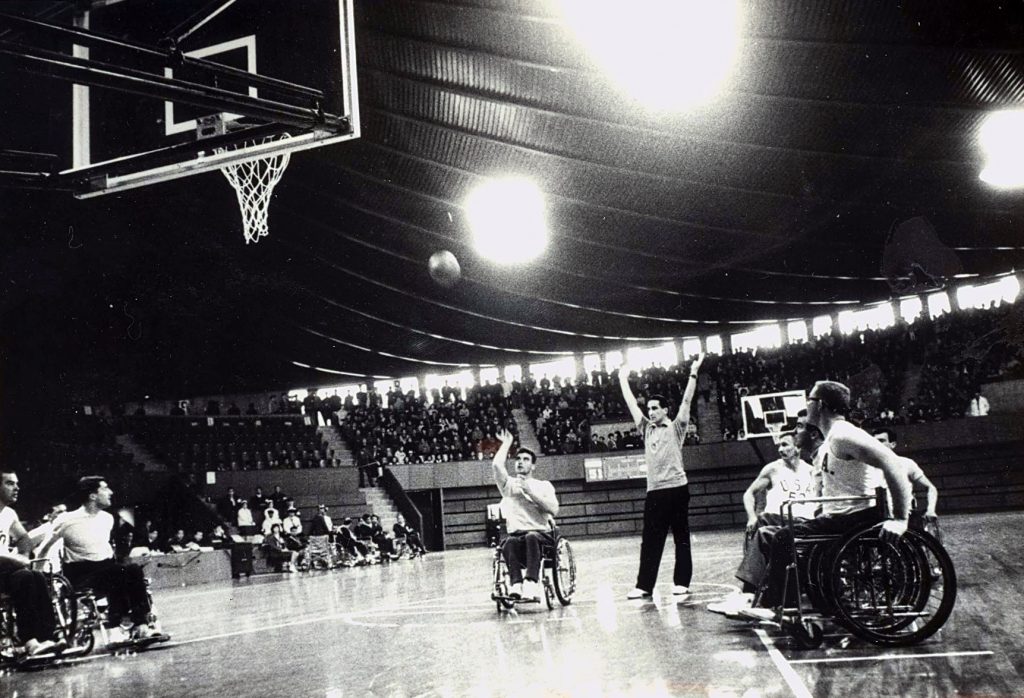 An unkown opponent of the United States shots a free throw in the wheelchair basketball competition at the 1964 Tokyo Paralympic Games at Yoyogi National Gymnasium. CC BY-SA 3.0

Shifting from Dr. Nakamura's influential role in Japan's progress in helping develop opportunities for para-athletes back to the basketball court, one of the most poignant moments in the book is described near the midway point. Davis prefaced the scene, which happened three years after WWII, in the prologue.

"When paralyzed veterans took wheelchair basketball out of hospital gymnasiums and into sports stadiums like Madison Square Garden, Boston Garden, Chicago Stadium ... and the Palestra in Philadelphia, they showed they were not going to hide their condition behind closed doors," Davis observed.

"Their skill and moxie stirred a large section of the nation and, most importantly, they educated doctors, politicians, the media, business owners, and the general public about the latent value of people with disabilities."

Exhibit A was Jack Gerhardt, a paratrooper who had been wounded at Normandy, France, in WWII, who appeared on the cover of Newsweek on March 22, 1948, "holding a basketball while sitting in a wheelchair," Davis reported.

As recounted in the book, Gerhardt left a lasting impression.

"When the game started, the chatter in the stands gave way to uneasy, muted murmuring," wrote Davis. "Halloran's Jack Gerhardt was speeding around the corner like racecar driver Mauri Rose cornering at the Indianapolis 500 when he collided with another player and spilled out of his chair. Matrons gasped and dabbed at their eyes with handkerchiefs; crusty sportswriters complained that the smoke from their Lucky Strikes was causing them to tear up.

But after Gerhardt muscled his body back into his chair and demanded the ball, and after the Cushing crew brayed their displeasure at the officials—Whatsamatta, ref, can’t you hear either?—the mood inside the arena relaxed, and the fans began to cheer and whistle as if they were witnessing a miracle.

"Wheels of Courage" is an uplifting, well-reported, well-researched story about wheelchair basketball, para-athletes and the Paralympics. And it's a book published at the right time. A reminder that the human spirit can overcome insurmountable obstacles.

Learn about/ Buy the book: From Goodreads, here, and from the publisher, here.

From the 1950 film The Men, legendary actor Marlon Brando appears at the Birmingham, Virginia VA hospital. In this short clip, Brando goes bowling in a wheelchair and competes in a basketball game, too.