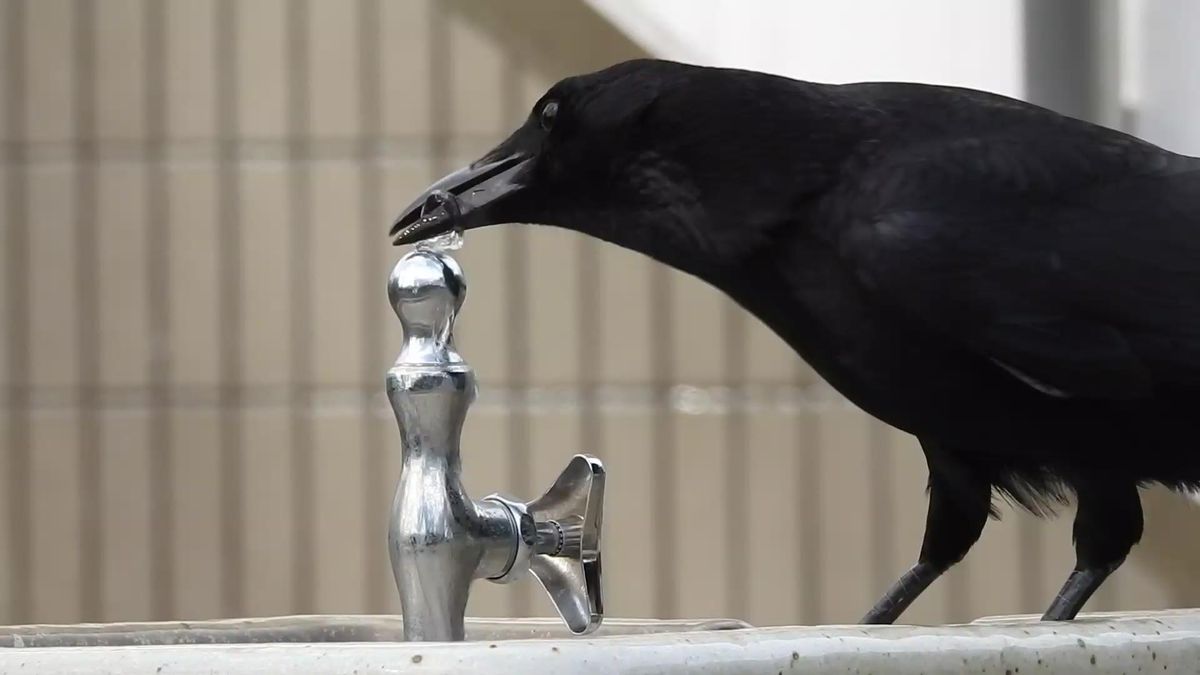 Is there a bird more intelligent than the crow?

Is the crow a primate in the global world of birds?

It’s greater than that.

The above extract is from a conversation with the ornithologist Hiroyoshi Higuchi, Professor Emeritus at Tokyo University and Visiting Professor at Keio University.

Crows continue to surprise humans with their supreme intelligence. Sometimes they impress us, sometimes they annoy us. They can also behave quite dangerously.

In his book, Higuchi writes about the versatility of crows. There are “car crows” that break walnut shells on car tires, “stone-placing crows” that put stones on railway tracks, “public-bath crows” that visit smoke baths, “soap crows” that go into bathrooms, and “small-fire crows” that take lit candles from shrines.

The author observed most of these crows first hand, and then wrote about his experiences in great detail in his book.

Newspapers and television often cover the behavior of these crows. These birds provide plenty of talking points.

The biggest surprise related to an observation of “faucet crows” in a park in Yokohama between March and April 2018.

Higuchi noticed that female carrion crows would turn rotation-handled water fountain faucets with their beaks, and then drink the rising water several centimeters above the faucet.

When the crows wanted to bathe, they turned the faucet further to increase the amount of water – indicating their intelligence. A local resident revealed that the crows had been doing this since 2017.

Other researchers discovered that wild crows behaved in similar ways in four other regions, including Sapporo. However, the faucets in three of these cases were lever-type. It is harder to operate a rotation-type faucet.

Higuchi examined whether there were any reported cases overseas, but he only found one case in China. The crow in question was a pet that could turn on lever-type faucets. In any case, crows that can turn on faucets are rare across the world, and only Japanese crows have demonstrated the ability to rotate the water device.

Moreover, there are no examples outside Japan of crows that can crack walnuts. In cities such as Akita and Sendai, crows break hard walnut shells on cars and then eat the edible part. There are even highly-skilled crows in Sendai that place walnuts in front of the tires of cars waiting at red lights – just to be certain the food will crack.

Why are Japanese crows so wise?

The crows that are commonly seen in Japan are jungle crows, which are found in East Asia, and carrion crows, which are also present in Europe. However, Japanese crows behave in a way that is not seen overseas.

In urban areas overseas, it is common to use large garbage cans – but in Japan, there is a tendency to put garbage in bags and then place them on the street, partly because streets in Japan can be quite narrow.

During Japan’s period of rapid growth, the amount and types of raw garbage increased in cities across the country, and crows learned when, where, and what types of food would be available.

Responding flexibly to such a diverse range of options is thought to have made the crows wiser.

Typically, urban crows collect food in the morning and then hoard some of it in hidden locations. Doing this reduces the burden of searching for food and creates time to spare – something which has led to the emergence of “slide crows” and “large wheel crows” that play on electrical wires.

Incidentally, the 1996 incident in Yokohama whereby crows laid stones on railroad tracks was connected to their hoarding behavior.

Crows, which have always been intelligent, have deepened their ties with human society, and they have utilized man-made objects to show their capabilities in various ways.

The jungle crows that appear at the Fushimi Inari shrine in Kyoto are fond of its Japanese candles. The crows take the candles with their beaks, and then fly off into the sky with the flames still flickering.

Then, they hide the candles among fallen leaves in forests, or in gaps on thatched roofs – which is dangerous.

Crows love oil and fat too, which is why they tend to steal soap from bathrooms. The soap is not a staple food though – apparently it is just a luxury item.

They are not afraid of flames, and tasting melted wax is like “semi-cooking.”

According to Higuchi, genius crows are rare. To improve his understanding of any possible genius crows, he would need to conduct further research focusing on individual birds from a young age.

The female carrion crows that rotated the faucets in the park in Yokohama were raising chicks, so they would have been the perfect research subjects. However, they suddenly disappeared. A pair of male crows remained but they did not have the intelligence to rotate the faucet.

Higuchi likened this situation to how things are not the same when a wife dies.

The professor has been researching crows for 50 years.