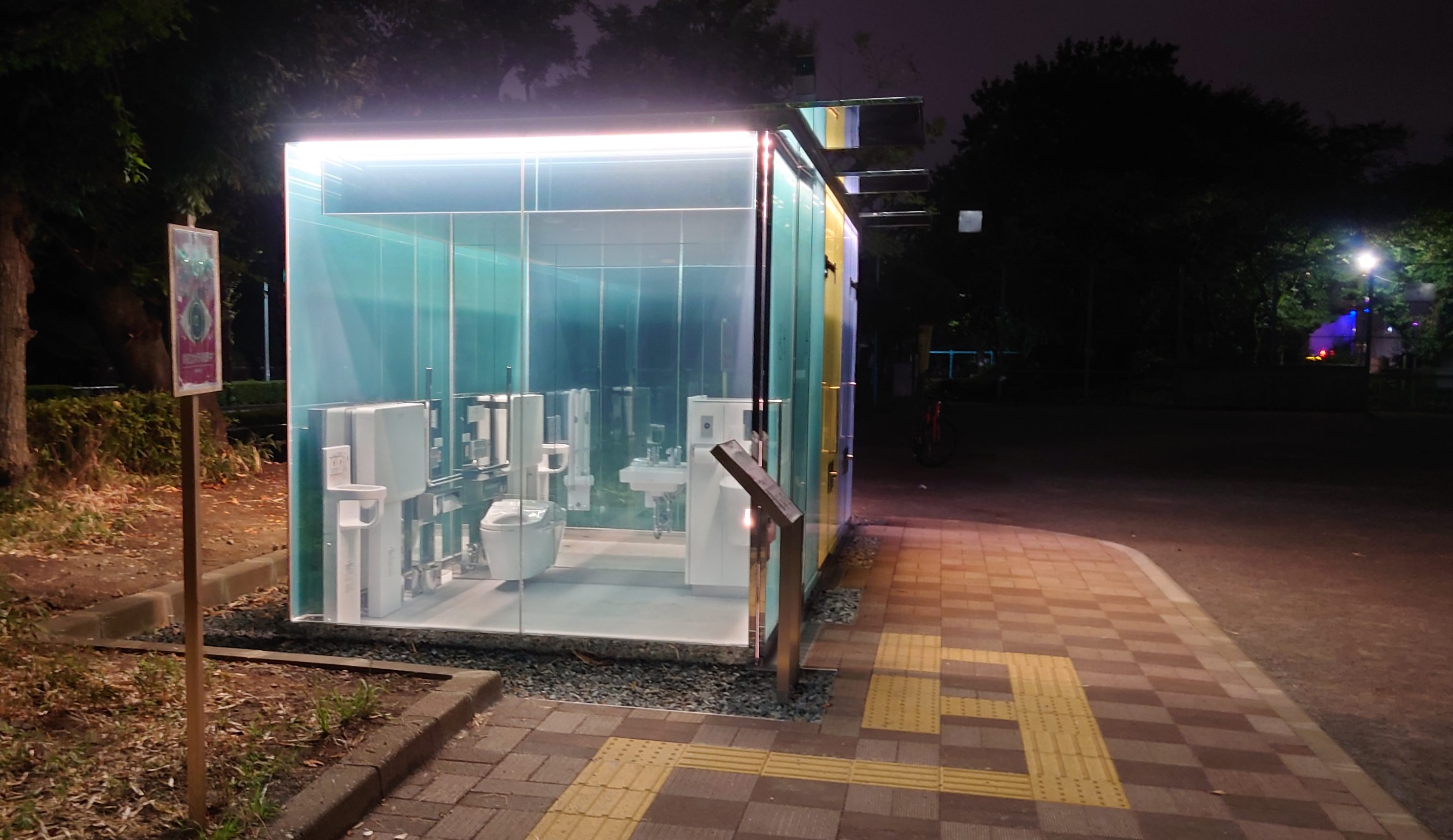 In the last few weeks, both domestic and international news outlets have been busy heralding the arrival in Tokyo of two so-called ‘transparent toilets’ (透明トイレ).

Brightly colored cubicles of apparently transparent glass, the structures appear upon first glance more like a modern art installation than a public convenience.

Indeed, when visited, there were definitely more people there to take photos than to actually use the facilities.

Utilizing state-of-the-art technology, these user-friendly cubicles allow the public to inspect the interior before committing on whether or not to use them.

Installed in public parks – Yoyogi Fukamachi Small Park and Harunogawa Community Park – along the western border of Yoyogi Koen, the principle aim of the ‘transparent toilets’ is to dispel commonly held notions that public toilets are ‘dark, dangerous, and dirty’. 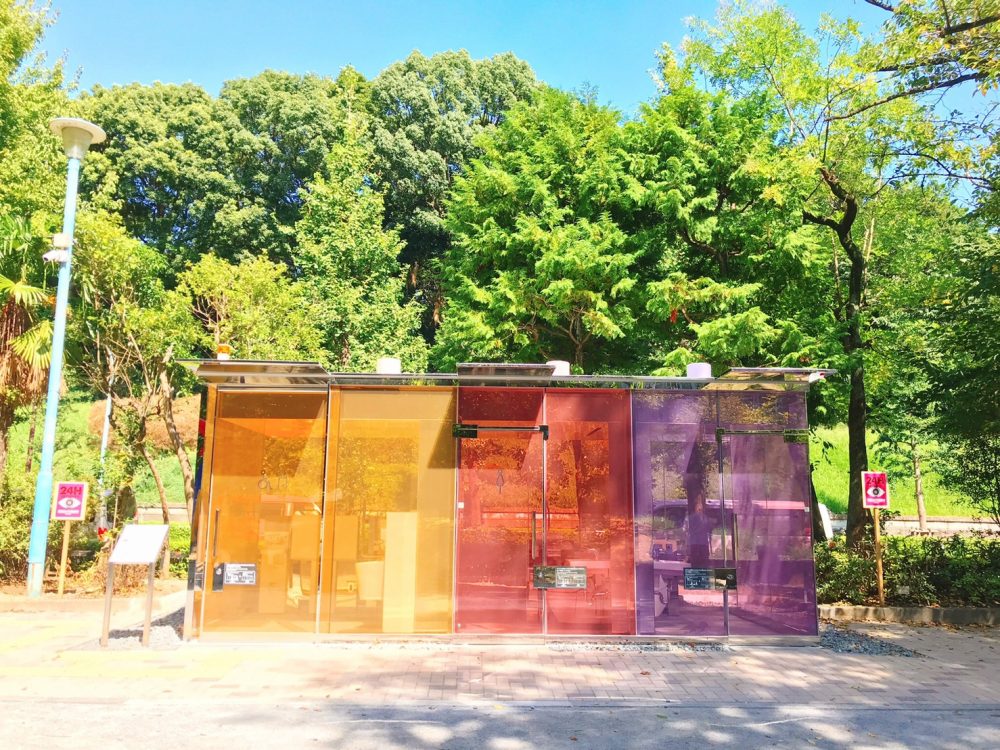 To do so, a group of 16 internationally renowned architects – among them, Pritzker Prize winner Shigeru Ban, combined with the Nippon Foundation, Toto Ltd., Daiwa House and Shibuya Ward municipal government, to create ‘The Tokyo Toilet’ project.

17 sites throughout the wider Shibuya area have been chosen in total. The new facilities at the two aforementioned Shibuya sites and at a further site in Ebisu Koen began service on August 5.

Another site – Nishihara 1-chome Park – opened for public use on August 31, with further staggered installation dates continuing through September 7, 2021.

The project was borne out of the renovation of a number of the city’s public toilets prior to the now postponed 2020 Tokyo Olympic and Paralympic Games.

What architects involved in the project found was that, regardless of whether or not a public toilet was recently renovated, lingering doubts about cleanliness and safety persisted, leading to widespread reluctance to use them. 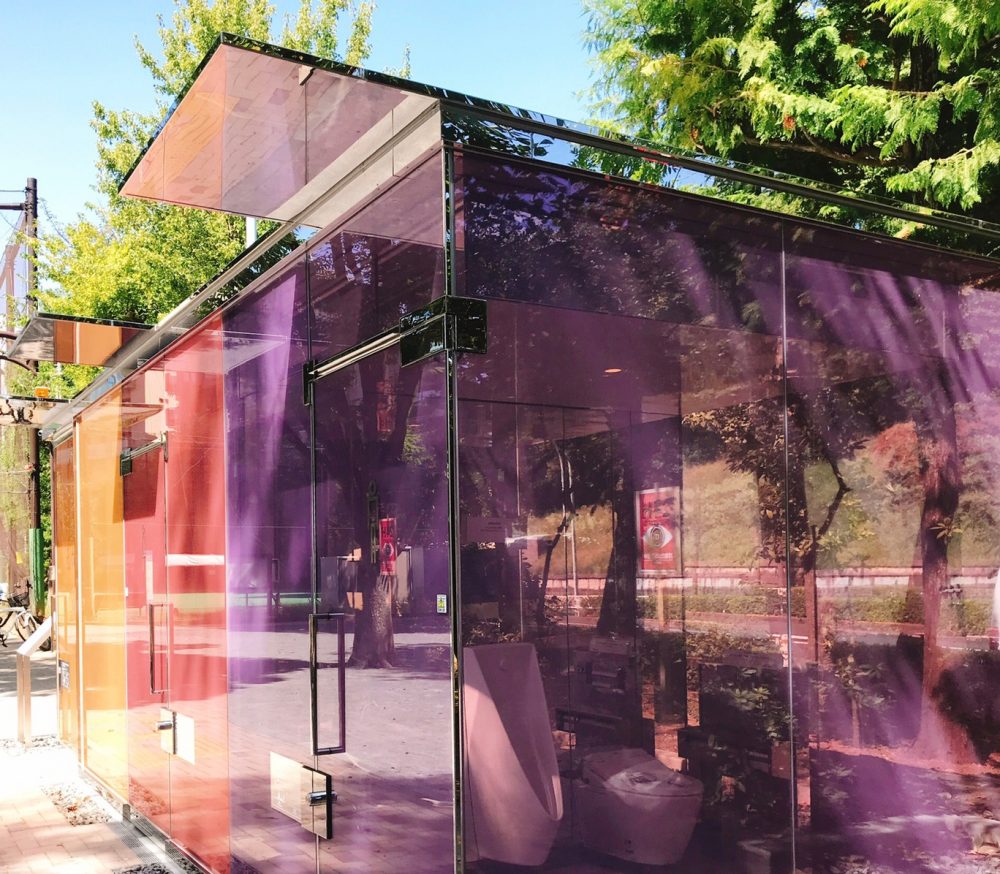 This is of course intriguing from an outside perspective.

Lifestyle.Inq magazine placed Tokyo at the top of its list of world cities with the cleanest public toilet facilities (Shanghai, Zurich, and Stockholm making up the other positions in the top four).

With over two billion people throughout the world lacking access to even a private toilet, and many millions more living in societies where public toilets are often genuinely dangerous and/or disgusting, the standard public toilet facilities of Tokyo appear relatively immaculate.

That Japanese architects would seek to puncture public misconceptions regarding safety and cleanliness by introducing the world to an apparently ‘see-through’ toilet is what has caught the international media’s attention. 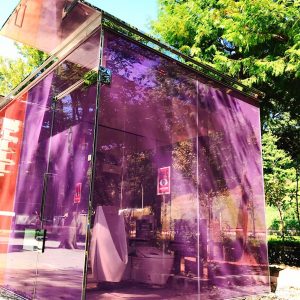 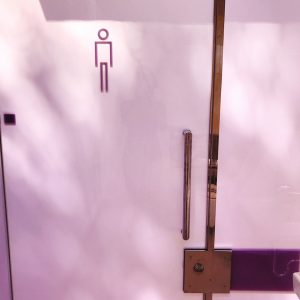 The transparent glass of each brightly colored cubicle allows potential users to approach, peer inside, assess the toilet’s cleanliness, and check that there is no one else lurking inside.

Users are then completely hidden from the outside world behind a thick layer of frosted glass.

Famed novelist Jun-Ichiro Tanizaki once wrote that ‘the Japanese toilet is truly a place of spiritual repose’.

He praised ‘that sensation as one sits in the dim light, basking in the faint glow reflected from the shoji (paper doors), lost in meditation or gazing out at the garden.’

It is interesting therefore that this ultra-modern form of Japanese public toilet should adopt some of the aesthetic properties Tanizaki praises.

At night, the matte-glow of the toilets resemble a row of traditional paper lanterns, lighting the parks they serve.

Similarly, when not in use, the transparency of the glass and natural colors allow them to blend into their park surroundings.

Indeed, the Nippon Foundation website states that the public toilets of their design ‘stand in the park casually, like playground equipment, benches, and trees, separate from other architectural objects.’

In other words, these public toilets are not the dark, scary, and dirty enclosed buildings into which, in the common misconception, the public enters at their own peril.

Rather, they offer an open space that is simply another aspect of the park, a public place to be enjoyed, and as the Nippon Foundation website says, a space that “fosters a spirit of inclusivity”.

But does it work? Are locals genuinely encouraged by this inclusivity? Will they actually use them?

When JAPAN Forward approached graphic designer Hiroshi Iso (32), for an opinion on the project, he gave the following assessment.

The transparency really appeals, as you can check the cleanliness from outside. Often, with a standard public toilet, you enter a sealed room only to discover that the facilities are extremely dirty. This can be discouraging, particularly as this often leads to a long and arduous search for a cleaner alternative. This way seems much more convenient and will save a lot of time.

The facilities at public toilets – particularly those located in parks – are always so dark. Not only that, but the structure of the room itself is often extremely deep-set, making entry even more uninviting.I often feel too scared to enter, given that I can’t see inside. The skeleton toilet appeals given its openness, which makes it seem much safer.

A Unique Place in the City

And while international opinion regarding the ‘skeleton toilet’ has been mixed, to say the least, the concept clearly appeals to the project’s primary audience – everyday Japanese previously put off by perceived hygiene and safety issues.

In doing so, the project achieves its aim of broadening the city’s inclusivity.

Providing light and color from the unlikeliest of places, the so-called ‘transparent toilet’ has already forged a unique place for itself within the contemporary make-up of the city.