[Speaking Out] Thanking Abe for Putting National Interest Above Popularity 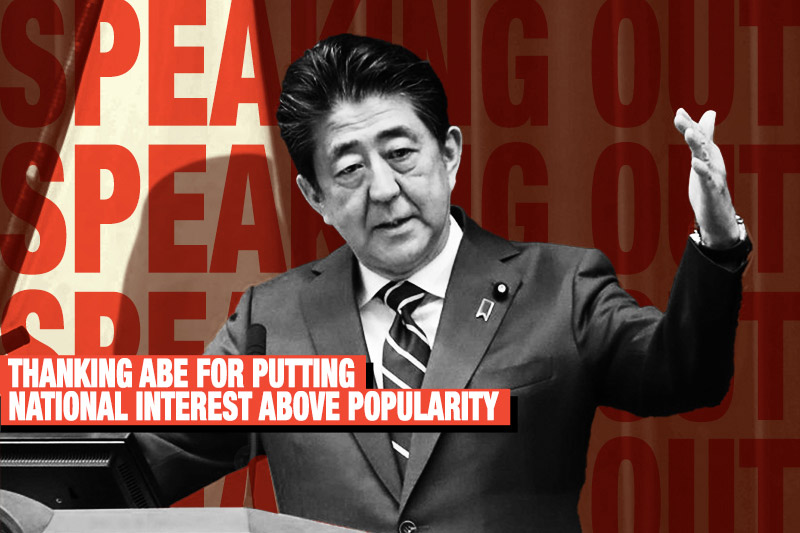 Thirteen years ago, Shinzo Abe fell ill and resigned as prime minister. Today, however, he looks far different. He now stands firm despite his illness.

Before offering to resign again as prime minister for health reasons, he took actions to cope with the foreseeable crises facing Japan. Abe now looks like a reliable strong man who is propelling Japan into the glare of the future. Even after resigning, Mr. Abe will remain a center of the ruling Liberal Democratic Party.

On August 28 when Mr. Abe offered to resign as prime minister, he officially decided to secure novel coronavirus vaccines for all citizens, while providing them preferentially to senior citizens and healthcare workers, in preparation for simultaneous outbreaks of the coronavirus and the flu in the coming winter.

Mr. Abe has also set up a framework to prepare for another present danger: the nuclear threat from North Korea and China. In Japan, which had been complacent with pacifism, dreaming of “exclusively defensive posture,” the concept of preemptive strikes had been viewed as dangerous. Mr. Abe has broken through the absurdity and changed course in the direction of allowing Japan to strike enemy bases identified as preparing for missile attacks on Japan.

Japan must defend itself and its people. Prime Minister Abe has continued to make this natural necessity a reality with his policies, not with empty slogans. Like his grandfather, former Prime Minister Nobusuke Kishi, Mr. Abe has promoted unpopular legislative agendas based on Japan’s national interests.

Even in the face of his falling approval ratings, Abe has not hesitated to make decisions based on national interests, including the legislation of confidential information protection act and the peace and security legislation that allows Japan to partially exercise its right of collective self-defense. He has also advocated constitutional amendments and without a doubt will continue to be a flag bearer on this issue.

In the international arena as well, Prime Minister Abe has made courageous proposals. He has launched an Indo-Pacific strategy to prepare for Chinese threats as the most alarming issue. He has also created a Japan-United States-Australia-India security cooperation framework. In the economic field, Mr. Abe has orchestrated the 11-country Trans-Pacific Partnership free trade agreement while overcoming the U.S. Trump administration’s withdrawal from the pact. He has also achieved an economic partnership agreement with the European Union.

Another Chance to Come to the Fore

It is of even greater significance that Abe has urged the Japanese people to be proud of their motherland. It is natural for the nation and the people to learn from history. But learning from history is not equal to completely denying prewar Japan. In his statement to mark the 70th anniversary of the end of the war, Mr. Abe mentioned this common-sense idea and declared that he would put an end to a situation in which Japanese future generations continue to apologize over history. He has positively assessed Japan’s history, while regretting what should be regretted.

Furthermore, Mr. Abe has placed North Korea’s abduction of Japanese citizens as an issue symbolizing politicians’ responsibility, and taken action to demonstrate that the rescue of its abducted citizens is a natural duty of the government.

Mr. Abe is set to cede the premiership to his successor soon. After his resignation, Japan and the international community will find anew how important and great his role has been.

I would like to emphasize that Mr. Abe has worked furiously like a raging lion over the past eight years. I extend my heartfelt gratitude to him for it as a Japanese citizen. And I am a believer. Mr. Abe will have a third chance to come to the fore to lead the country after recovering his health through medical treatment and rest.

(A version of this article was first published by the Japan Institute for National Fundamentals, Speaking Out #714 (Special), on September 3, 2020.)

Yoshiko Sakurai is president of the Japan Institute for National Fundamentals and a freelance journalist.