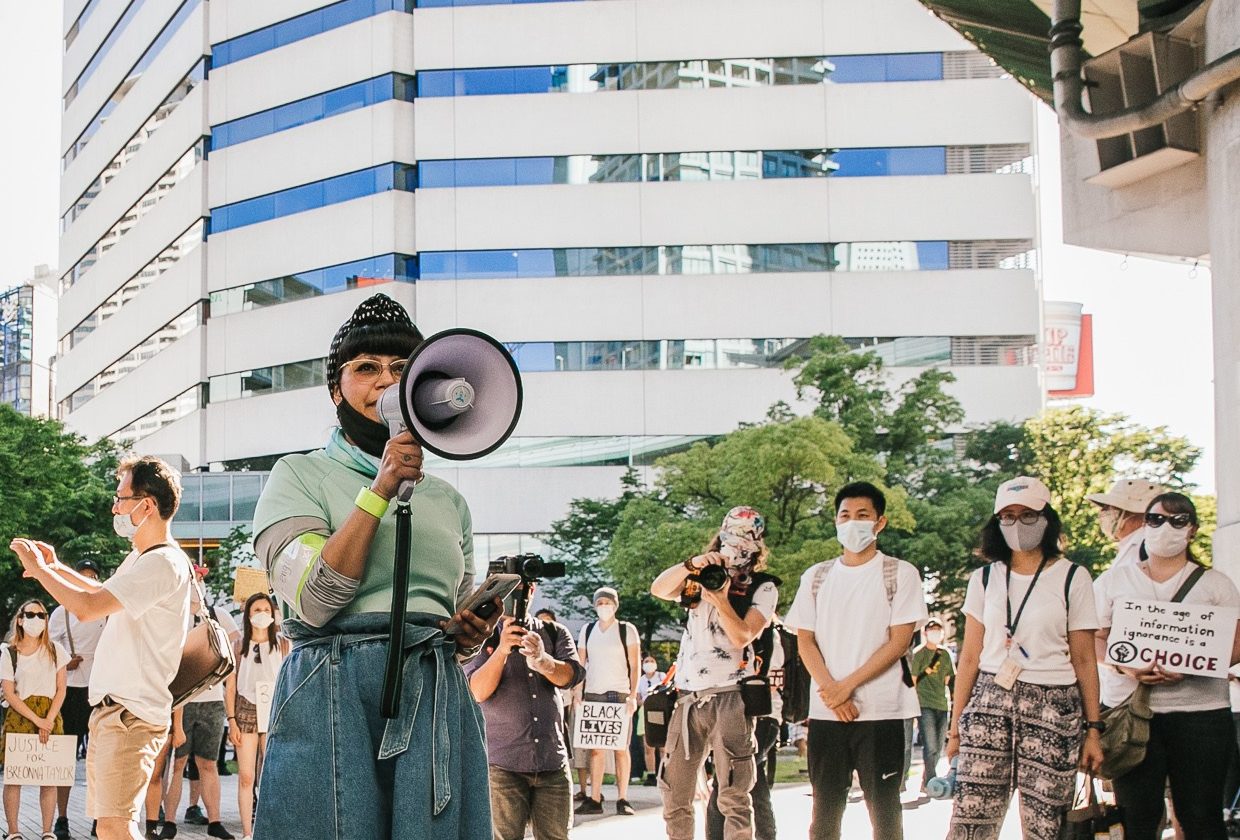 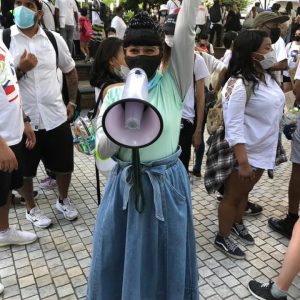 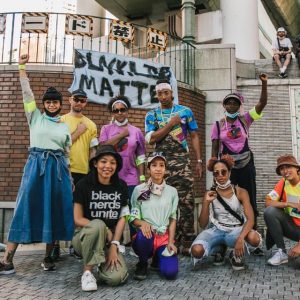 Where are you from?

This is a question often asked of foreign residents in Japan. While it can get repetitive, it arises from natural curiosity.

But, paradoxically, what if the same question is directed at you in your own country, your place of origin, where you were born?

For Misty Fujii, 36, a DJ living in Osaka, it’s a question she’s encountered on both sides of the Pacific: “In Toronto I would still get asked at least once a day where I’m from. I mean, I’m fifth-generation Canadian, I was born in Canada, my parents were born in Canada, my grandparents and so on, so that was really frustrating.”

“Really, what people wanted to ask is ‘What are you?’ Fuiji added, “But you can’t really, and so they’d say, ‘Where are you from?’”

Which leads to Misty’s obvious answer: “I’m from Canada,” which she says typically leaves her interlocutors “not very satisfied”.

Misty was a regular visitor to Japan before moving to Osaka in 2019. She has a black father and a white mother. And while she encounters that question — Where are you from? — often in Japan, she doesn’t feel the same frustration. “I don’t feel people are asking me because of my skin color per se.”

Music plays a central part in Misty and her Japanese husband’s life. She DJs in Osaka and beyond, and also pitches in at Night Beat Records in Amemura, a record store run by her husband which specializes in American music genres, such as jazz and blues.

“I moved to Japan because of my husband, and because I love the music scene in Japan. I also wanted an opportunity to live abroad and immerse myself in a new country and culture,” she said.

While Toronto and Osaka have roughly the same population size, one of the things Misty noticed right off the plane was that the black population was far smaller in Osaka.

Prior to moving to Japan, Misty did her homework — on Facebook — in order to find friends and a network.

“I’m still looking for Canadians,” Misty said, jokingly, “but as far as black people, I basically just searched “Black Japan” in the Facebook bar, and from that I found two really amazing groups that I am very active in, both online and in real life.”

Those two groups, Black Creatives Japan and Black Women in Japan, both of which have chapters throughout Japan, have played an outsize role in helping Misty connect with others and share experiences.

“I think there are about 4,000 members in Black Women in Japan. To me, I was shocked, because I was like, there’s more black people here than I thought,” she said.

Friendships started through the Facebook groups have also helped expose how black people in Japan are treated. “I’m very light skinned and I think I’m able to avoid a lot of racism which happens to black people here because my skin tone is quite light,” she added.

By way of example, Misty highlighted the plight of a black friend, also living in Osaka, who was stopped nearly a dozen times by police in the summer of 2019 while going about her business. Each time she was asked to show identification.

“They let her go, but it’s just that frustration,” Misty said.

Of her own experience as a Black woman living in Japan, Misty said it’s “hard to paint a clear or definitive picture of what it’s like to live here as a Black woman for a few reasons. I recognize I have a huge amount of light-skin privilege which shelters me from being on the receiving end of a lot of racism.”

Furthermore, as Misty pointed out, because her husband is Japanese, she’s sheltered from having to do a lot of the difficult things foreigners encounter, such as renting an apartment, for which you typically need a Japanese guarantor.

While Misty was no stranger to Osaka before moving here, it takes adjusting, especially given Toronto’s multicultural make-up, which is reflected in everything from politics to the media.

“It’s different for me to see little Black representation in things like magazines and TV here, since I’m used to living somewhere very multicultural. It’s also disheartening to see Black people portrayed as stereotypes when Black people are featured in such media,” Misty said.

“Another experience is seeing people be so mystified by my hair when it’s curly — and it is challenging to find hair products suitable for my hair type. It can also be challenging to find makeup that’s dark enough, so I have to bring a lot back from Canada with me.”

Also, as Misty noted, in Japan “there is a lot of fascination and love for black culture, which I think is really great.”

But, she said, “The only downside to that is that there doesn’t seem to be a lot of knowledge about black culture or the history of black culture and black people."

Sometimes this knowledge gap can play out in caricatures and stereotypes. NHK recently came in for widespread censure for resorting to stereotypes in one of its flagship current affair programs through which it intended to give context to the demonstrations that flared up after the brutal killing of George Floyd, an unarmed Black man, by a white policeman in Minnesota last May, which was captured on a camera phone.

In the hours and days immediately after Floyd’s gruesome murder, millions of people worldwide began to organize under the Black Lives Matter banner, which first began as a hashtag after the killing of Trayvon Martin, a black teenager in Florida, in 2013.

Misty became aware of the video of Floyd’s death hours after it happened, but, as she recounted, she did not want to watch it. “I didn’t want to see the video to be perfectly honest, but I ended up seeing it while scrolling through feeds. Once it started, I couldn’t stop watching because in that moment I felt like I was there.”

That video, now a vital piece of evidence, captures George Floyd as he lays immobilized and handcuffed while a white policeman, over the course of nearly nine minutes, caused his death.

Like so many other black people throughout North America, it also focused her thoughts on her own family. “When I looked at this man (George Floyd), that could have been my father, my uncle, my brother, and watching that is really, really difficult,” she said.

And for the first time in a long time, following Floyd’s death and the outpouring of grief and anger, Misty felt helpless and alone.

While Misty explained she can count on the support of “amazing family and friends in Japan” — especially that of her Japanese husband — the experiences they have lived through are different from hers, and those of black people throughout North America.

“There was a minute where I felt really alone. I’m all the way here, I know my friends and family are really struggling with this too, and I’m here struggling, and nobody understands me,” she said.

But, as she quickly added, there is a really amazing black community supported by Japanese and other foreign residents. Collectively, they wanted to show their solidarity and support for Black Lives Matter.

That support manifested itself in the Black Likes Matter marches which took place on June 7 in Osaka and Tokyo, and which have since spread to other cities in Japan.

Misty recounted the short timespan they had to organize the Osaka march, and the extra precautions necessary, given that we are still living through the deadly COVID -19 pandemic.

However, Misty said, she and the other organizers and BLM Osaka were overwhelmed by the response in Osaka.

About 2,000 people turned out to march in Osaka on June 7, on a day when millions across the globe marched to protest against police brutality, also showing solidarity with the Black Lives Matter campaign.

“I wasn’t as active in BLM Toronto as I am here, and truthfully a lot of that comes from a place of fear, even though I know black people do sometimes get singled out here in Japan more than others, I don’t feel the same fear of police here,” said Misty.

The focus of the Osaka march was firmly on police brutality and the systemic racism experienced by the black community in the U.S., Misty explained.

“I can’t even begin to tell you the feelings I felt during the Osaka march,” Misty said. “I think we all went home afterwards and had a good, proper cry. We’d felt so alone and so helpless, and in a matter of five days we were able to go from feeling helpless and alone to having a huge community and being part of something.”