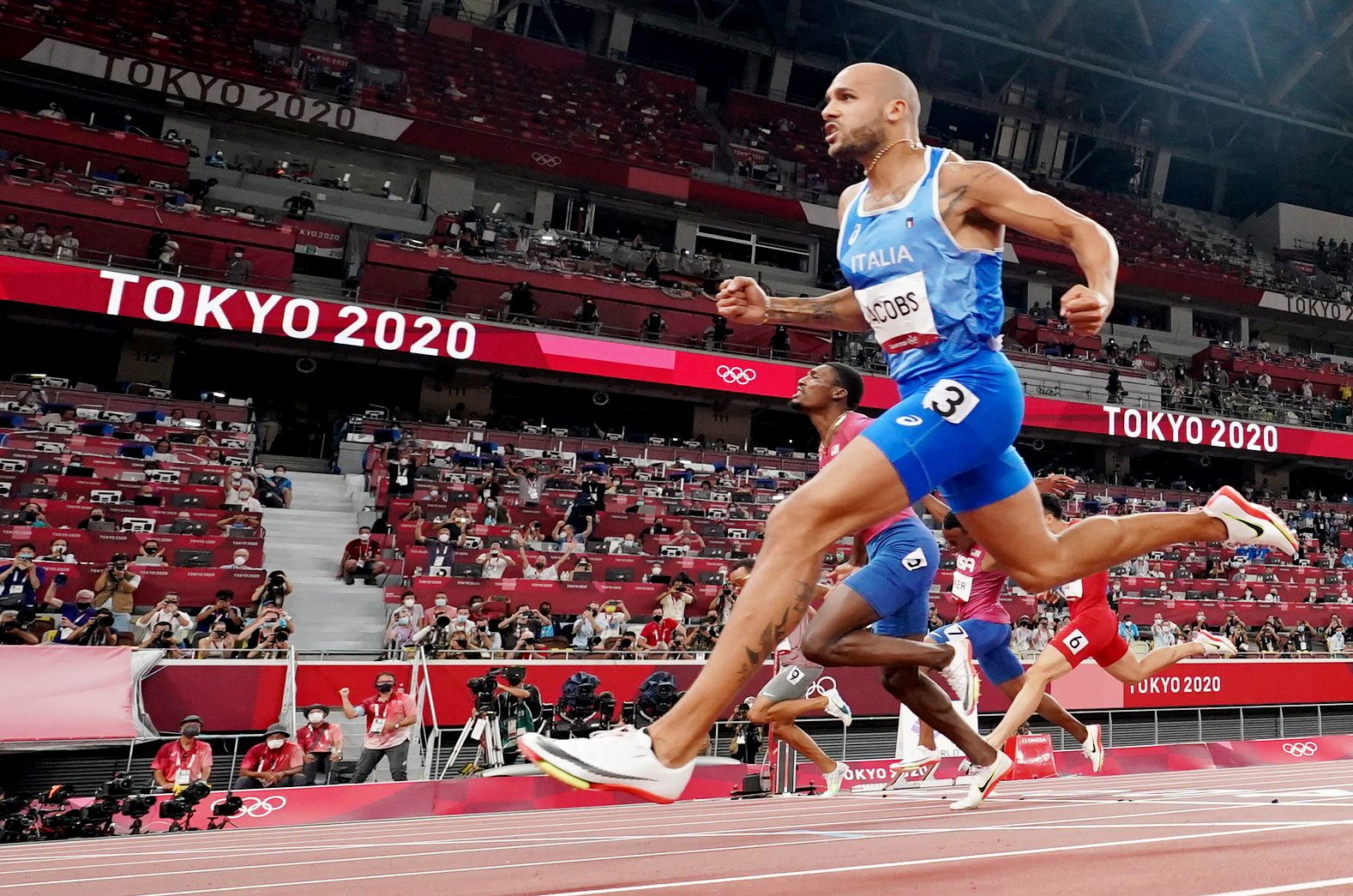 Italy's Lamont Marcell Jacobs wins the gold medal in the men's 100-meter final at the Tokyo Olympics at the New National Stadium on August 1. (Fabrizio Bensch/REUTERS)

Jacobs collected the first 100-meter title in the post-Bolt era, winning the marquee track race in a European-record time of 9.80 seconds at the New National Stadium on August 1. The top three-finishers’ times were separated by less than 0.10 seconds. All three medalists set personal-best times in the race.

The premier athletics prime-time race, held at 9:50 p.m., was a showcase event on a day in which more than 25 gold medals were awarded at the Tokyo Games.

Jacobs, who was born in El Paso, Texas, held off fast-charging American Fred Kerley to the finish line. Kerley, who was born in San Antonio, Texas, grabbed the silver in 9.84 seconds. Canada’s Andre de Grasse was clocked in 9.89.

“It’s been my dream since I was a child,” Jacobs told reporters after his spectacular performance. “I’ve won an Olympic gold after Usain Bolt, it’s unbelievable. Tonight, staring at the ceiling perhaps I will realize.”

Kerley led the race at the midway point, but over the final 50 meters Jacobs’ speed put him on a collision course with history and he raced past Kerley.

Jacobs held off a forceful challenge from South Africa’s Akani Simbine, who ran to his left in Lane 2. Late in the race Simbine appeared on the verge of challenging Jacobs for the top spot, but he slipped back further in the standings and placed fourth as Kerley and de Grasse exerted every last ounce of energy in an effort to claim the title.

In the post-race buzz that followed Jacobs’ triumph, Kerley admitted that Jacobs was an unheralded sprinter before this race.

“I really don’t know anything about him,” Kerley was quoted as saying by The Associated Press. “He did a fantastic job.”

American Ronnie Baker finished fifth in 9.95 seconds and China’s Bingtian Su, the oldest runner in the final at age 31, placed sixth in 9.98.

Jacobs moved to Italy as a boy. His mother is Italian and His father is American. He is a former Italian long-jump champion and his athletic pedigree was on full display through the 100-meter final.

The 26-year-old Rome resident became the first European to win an Olympic 100-meter gold since Great Britain’s Linford Christie at the 1992 Barcelona Games. What’s more, Jacobs became the first Italian to win the race at the Olympics.

Reigning world champion Christian Cooper of the United States is serving a doping ban until May 2022.

The semifinal races were held earlier in the day on Sunday. American Trayvon Bromell, who was the gold-medal favorite, failed to qualify for the final, completing his semifinal run in 10.00 seconds.

Bolt’s third consecutive 100-200 double-gold sweep occurred at the Rio Games. He began his remarkable run at the 2008 Beijing Games.