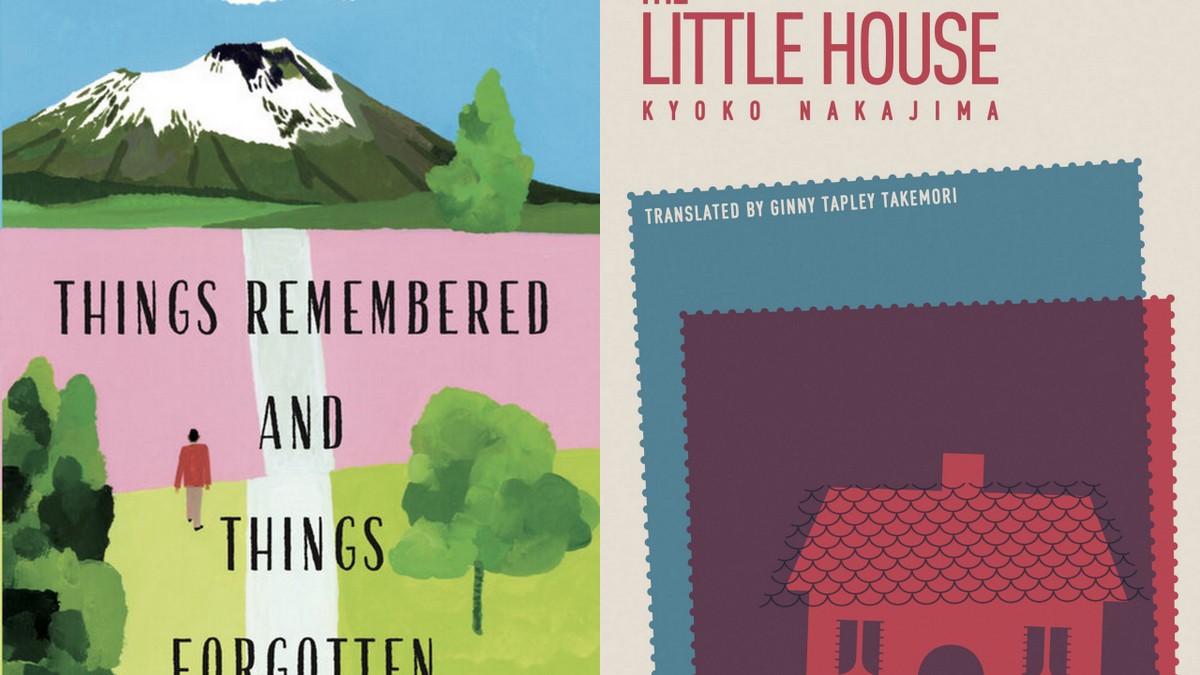 Contemporary Japanese writer Kyoko Nakajima is perhaps best known for her award-winning novel Chiisai Ouchi. The book won Japan’s prestigious Naoki Prize for Literature in 2010, and was then turned into a well-received movie of the same name by veteran director Yoji Yamada in 2014. The English version, translated by Ginny Tapley Takemori, came out in 2019 as The Little House (Darf Publishers).

Now Takemori has teamed up with fellow translator Ian MacDonald to bring a collection of Nakajima’s short stories to an international audience—Things Remembered and Things Forgotten (Sort of Books, May 13, 2021). This anthology is unique not only for the collaborative translation aspect, but because it also brings stories from various times in the author’s career that have never been published together before.

MacDonald and Takemori had each worked on one of Nakajima’s short stories previously. MacDonald contributed the titular story to literary magazine Granta in 2014, while Takemori translated the intriguingly-titled When My Wife Was a Shiitake the following year for Words Without Borders.

“Based on those previously translated stories, I was approached [by Natania Jansz at Sort of Books] about publishing an English anthology. So, first I selected about 15 short stories that I thought would be suitable for publication in combination with those two stories, and listed them as candidates. Then the translators and editor made the final choice of 10,” Nakajima explains.

“I like to read and write stories with a bit of mystery in them, but I also write realist fiction,” says Nakajima, adding that her short stories may be inspired by a conversation overheard on the train, something she reads online or even a historical tale that catches her fancy.

Many of the stories in the collection focus on the juxtaposition between the present and the past, the real and the imagined, the living and the deceased. “Two of them, When My Wife Was a Shiitake and The Pet Civet, are from the same collection in Japanese, and at the time I was exploring the idea of stories about interaction between humans and non-humans,” she says.

“I can’t choose a favorite in this collection, because all of my stories are like my own children. However, A Special Day stands out a bit for me because I wrote it after the Great East Japan Earthquake on March 11, 2011,” Nakajima says. “I think that those who lost their lives, or who lost loved ones, were unable to sort out their feelings because it was so sudden. I wrote this short story while I was still in shock, and so I set it up as if the many lives that were suddenly lost were allowed to come back for one day.”

“It’s always thrilling to have your work translated into another language!,” says Nakajima of the English version. “I trust both Ginny and Ian, because they understand my work very well.”

The feeling is mutual, and it should come as no surprise that both MacDonald and Takemori are big fans of Nakajima’s work.

“She is such a skilled storyteller, drawing the reader into her world, and she is also a very subtle writer where a lot is suggested behind the words on the page,” says Takemori.

MacDonald agrees. “She pulls you in and makes you want to keep reading — which isn’t easy when Japanese is not one’s native language — to care about the characters, and she constantly surprises you.”

The two translators enjoyed working in tandem on the project, as their styles meshed well. “I suppose we both have the same sense of how ‘faithful’ one should be to the original, without imposing our own style onto the text,” MacDonald notes. “Translating is usually a very solitary endeavor, so it was nice to know I had someone I could turn to if necessary, and Kyoko was also wonderfully supportive. Two might be the best number for co-translation, as beyond that I can imagine consistency of style could become an issue.”

“As Ian says, Kyoko was very helpful—she is always available to answer questions, and since I know she reads English very well and understands the translation process, I always send her my submission drafts to give her a chance to request any changes before the final edit. I did this with The Little House, too,” Takemori explains.

Working with a Movie Master

Speaking of her novel, how did Nakajima find the experience of seeing The Little House turned into a movie by a director of Yamada’s caliber?

She was particularly impressed by his efforts to recreate the story’s pre-World War II setting as authentically as possible. “Yoji Yamada was a young boy during the same era, and his depictions of the interior of the house were very detailed. I was surprised when I heard that the kitchen cupboards had genuine plates from that era—very expensive nowadays—even though there was no actual scene where they were taken out and used.”

Nakajima also recalls a scene depicting a traditional, labor-intensive method of cleaning kimonos, in which the pieces of the garment are first completely taken apart for washing by hand. Then, in a process known as shin shibari, the panels of cloth are dried by hanging and stretching them between two bamboo rods. “I’ve never seen this method with my own eyes, but I wrote about it in my novel, and I was really moved by the scene in the movie.”

While COVID-19 has undoubtedly hurt the publishing industry, with book projects postponed or even canceled, Takemori sees something of a silver lining, too. “One unexpected but very welcome result of the pandemic is the rise of online events. It really has opened up the possibilities of reaching readers and opening up a bigger market for translated literature, as well as helping to raise the next generations of literary translators.”

On a practical note, MacDonald points out that more financial reward would go a long way to attracting more people to the craft. “A combination of public and private funding, with larger translation grants and more freedom for publishers and translators to choose titles, would make literary translation a more viable career,” he says.

“It would certainly help if translators were more prominently represented in the publishing process and received a larger share of the profits. You also need publishers like Sort Of Books who are really invested not only in the literary process, but the marketing and sales side of the equation.”

Takemori adds that the rise in recent years of what she terms “translator activism”, especially in the UK, has helped to promote translated literature, such as events where publishing industry stakeholders can gather to share perspectives. Another initiative to raise awareness of the value of the translators’ role is the “#namethetranslator” campaign. It aims to give credit where it is due, and remedy such all-too-common scenarios where a translated work is given a glowing review in the media, yet the translator’s name is not even mentioned!

A further project dear to Takemori’s heart is Strong Women, Soft Power. This collective came together in 2017 to raise the profile of works by Japanese women authors, which have regularly been well under half of all Japanese titles in English translation. “We intended to start a discussion and it seems we have succeeded,” Takemori says of their efforts. SWSP are currently collaborating with the Japan Foundation New York to curate a series of online events featuring Japanese women writers and their translators.

With luck, more of Nakajima’s work will also be available in English in the near future. Her latest novel, Yasashii Neko (Yomiuri, 2021), deals with themes of intercultural marriage and the treatment of  immigrants in the Japanese justice system, and so seems tailor-made for an international audience. Adapted from her serial of the same name that recently ran in the Yomiuri Shimbun, it tells the story of the relationship and marriage of a Sri Lankan man and a Japanese single mother.

In the meantime, literary fans can dig into Nakajima’s Things Remembered and Things Forgotten. “This anthology is rather like a musician’s ‘greatest hits’ album. I hope readers will pick it up and enjoy going through it,” she says.