Traveling the San'in: Orochi and the Mythical Origins of the Sword 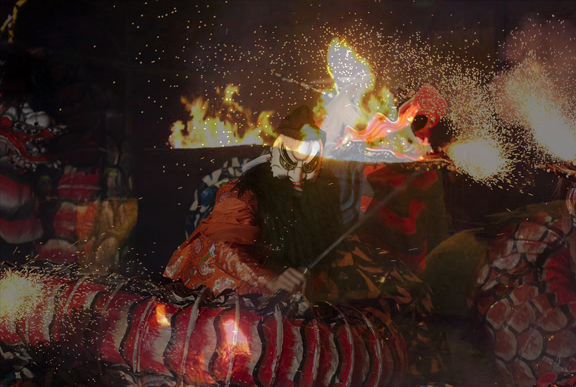 I recently took a trip to Shimane Prefecture, also known as the San’in region, to research some of the mythical origins of the sword and the indigenous iron and steel making culture of the area.

My journey began at one of Japan’s oldest shrines, Izumo Taisha. The Izumo region is steeped in Japanese mythology and is often referred to as the “Land of the Gods.” According to Shinto mythology, at one time Japan was controlled from Izumo by the deity Okuninushi. However, he is recorded in the Kojiki and the Nihon-shoki as giving the lands to Ninigi, the grandson of the sun-godess Amaterasu. In return, he was granted Izumo Taisha by Amaterasu.

There are some other aspects of the Izumo region that indicate the area did not originally belong to the Yamato clan. When paying one’s respects (omairi) at Izumo Taisha, instead of the usual two claps, worshippers clap four times. Also in the San’in area, the rice straw-woven shimenawa sacred ropes that are displayed above the entrance to the shrines are wound and hung in the opposite direction to the rest of Japan, while the posture of many of the Shishi “lion dogs” that guard the gates of shrines differs from that of the rest of Japan. 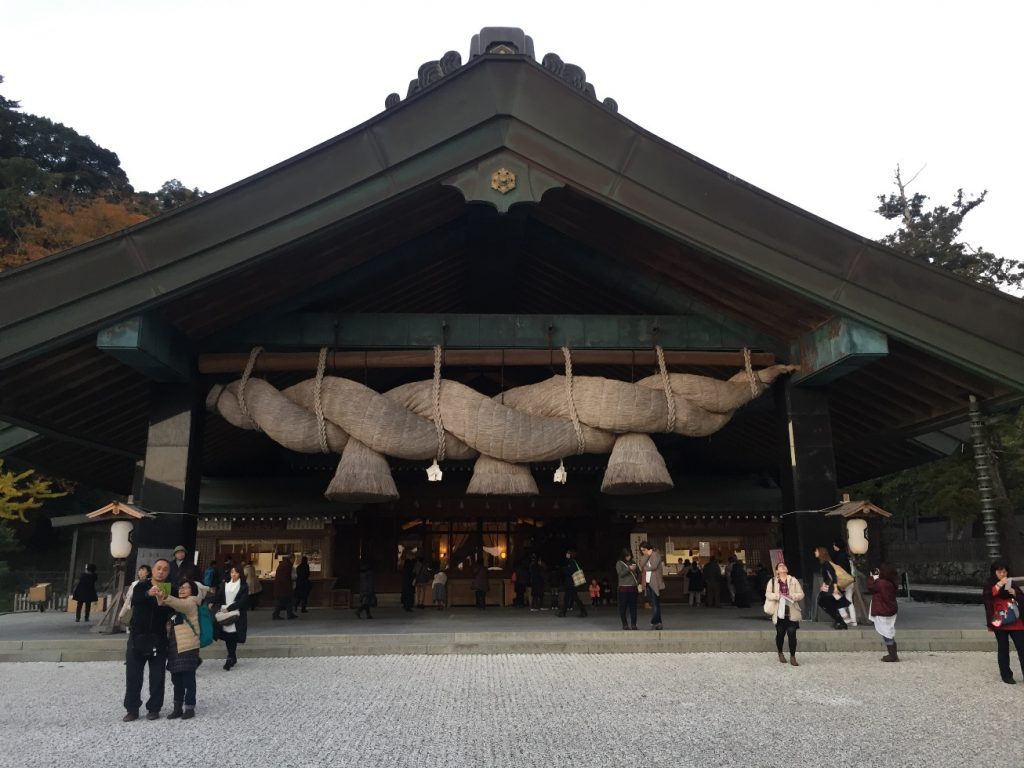 As Okuninushi is the main deity at Izumo Taisha and is said to govern the “realm of things unseen,” every year in accordance with the 10th month of the lunar calendar, some eight million deities from all over Japan converge at Izumo to hold meetings and decide the nation’s future. For that reason, this lunar month in Japan is referred to as Kanna-zuki: the month of no gods. However, in the Izumo area that month is known as Kamiari-zuki: the month of the gods. My visit to the shrine coincided with the annual Kami-mukae ceremony: the welcoming of the gods.

A reception area for the gods’ arrival is prepared on Inasa-no-hama beach. The ceremony takes place just after sunset with fires lit to guide the way for the gods coming in from the sea. Shinto music is played on flutes accompanied by drums with palpable tension gradually mounting as it gets closer to the moment of the gods arrival. Once they arrive, they are escorted from the beach back to Izumo Taisha enshrouded by Shinto preists. There, they are given special lodgings in the grand shrine during the stay in Izumo. 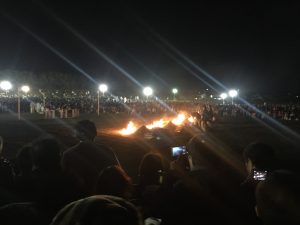 The next day, I went to see Iwami Kagura at the Tatsu-no-Gozen Shrine (also known as Ryuonzaki Jinja) in Yunotsu village. Yunotsu village is a small harbor town on the coast in the middle of Shimane prefecture, and home to many onsen (hot spring bath) that are housed in beautiful traditional tatami-matted hotels called ryokan. Tatsu-no-Gozen means “before the great dragon.” The meaning of the name of the shrine really comes to life once you realize that a dragon’s face appears to be coming out of the cliff directly behind the shrine. 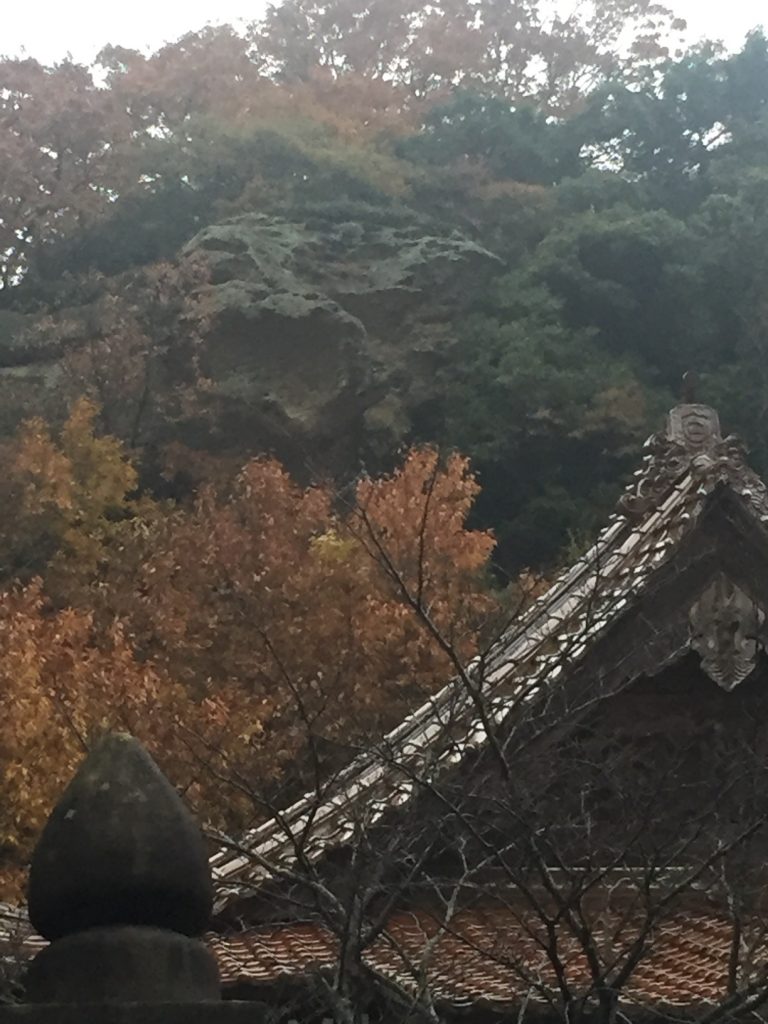 The dragon’s face coming out of the cliff face behind Tatsu-no-Gozen Shrine.

Kagura is a sacred traditional Shinto dance performed to music with elaborate costumes and masks that was originally performed to entertain the gods. The word Kagura is made up of two characters that literally mean entertaining the gods, while many of the plays are based on stories from the Kojiki and the Nihon-shoki of gods warding off the evil or fighting demons that were believed to be the cause of natural disasters. The origins of Kagura are uncertain, but it is said to come from the dance that was performed to encourage the sun deity, Amaterasu, to come out from seclusion in a cave.

On this occasion, I was treated to a fantastic performance of a play called Orochi, which tells the story of the deity Susanoo-no-o slaying the eight-headed, eight-tailed dragon-serpent, Yamata-no-Orochi, and the discovery of a sacred sword in one of its tails. This sword went on to be become one of the three items of the imperial regalia that has been passed down in succession from emperor to emperor, later gaining the name Kusanagi-no-tsurugi.

The story of the discovery of the sword in the tail of the Yamata-no-Orochi is also thought to be a metaphor for the unlocking of the secrets of steel or sword making. The inspirational performance by the Iwami Kagura group led me to the next stage in my journey: the old steel making towns of the San’in region. 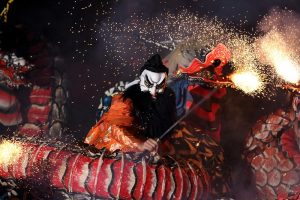 A performance by the Iwami Kagura group of Orochi : the story of the diety Susanoo-no-o killing the eight-headed, eight-tailed dragon-serpent, Yamata-no-Orochi.

In part two of my trip, I visit old steel manufacturing villages around Unnan city, an old tatara site, and a shrine that is home to the patron deity of iron and steel making.

Paul Martin is a former British Museum curator, Japanese Sword Specialist and a Trustee of the Nihonto Bunka Shinko Kyokai (NBSK). He is also an appointed Bunka Meister (Master of Culture: Japanese Swords) by the Japonisme Shinko Kai (Honganji).