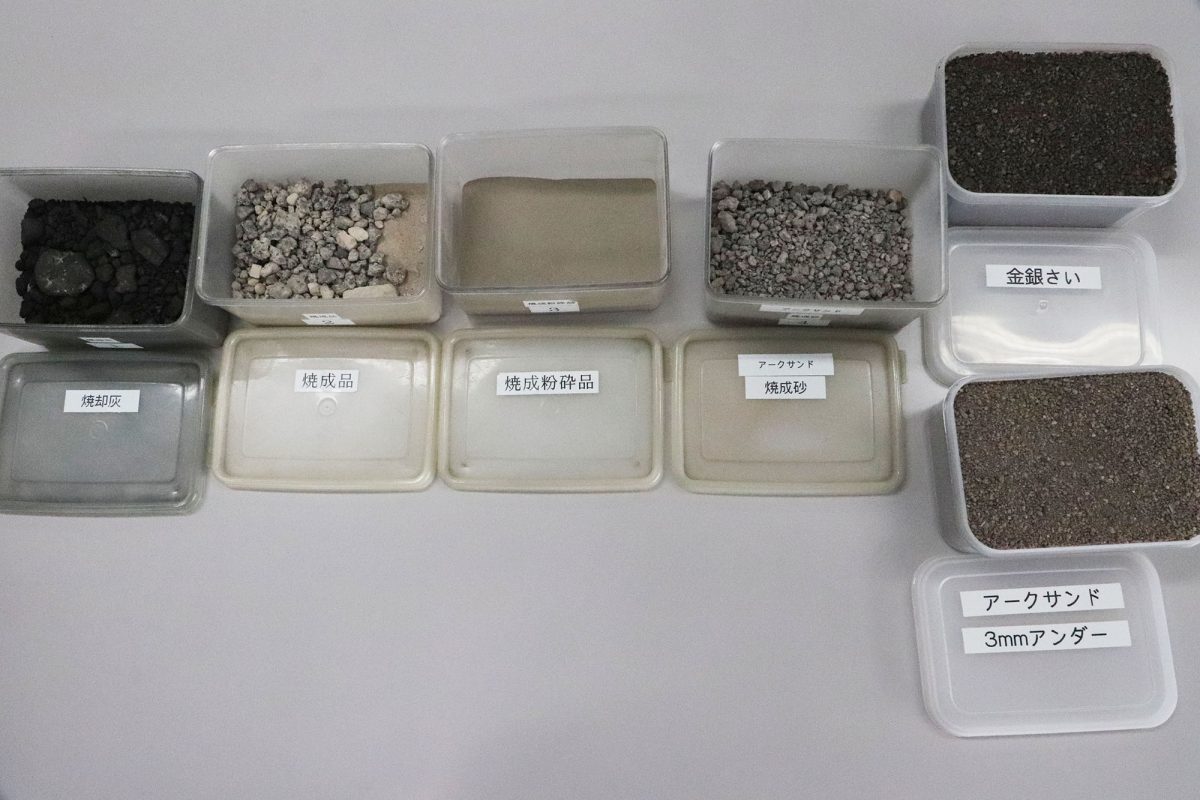 At the Saitama plant of Tsuneishi Kamtecs Corporation, incinerated ash from landfill waste yields gold, silver, copper, iron, and other metals, such as aluminum.

The company, based in Fukuyama City, Hiroshima Prefecture, says that income from rare metals — such as gold, silver, and platinum — comes to ￥2.5 million to ￥3 million JPY (about $20,000 to $25,000 USD) a month when converted to market prices.

Tsuneishi Kamtecs contributes to achieving the United Nations Sustainable Development Goals (SDGs) through its efforts to recycle waste. The company uses a process called calcination that involves superheating and detoxifying ash from incineration into an artificial sand product named “Arc Sand” or “A/S.” In turn, the Arc Sand is then used as a base material in civil engineering projects.

Hefting the Weight of Gold

“Please hold this,” said Yoshimitsu Kiriyama, a general manager and executive officer at the Saitama plant, as he handed me a plastic container with dark gray sand inside.

The Tsuneishi Kamtecs plant is located in an industrial complex specializing in recycling in Yorii town, Saitama Prefecture, approximately two hours by car from central Tokyo.

The container in my hand was 10 cm wide, 8 cm long, and 5 cm high. It was surprisingly heavy, and my hand sank under its weight when I held it. It was about three times heavier than one filled with the artificially created Arc Sand.

“It doesn’t look like it contains gold, but it contains both gold and silver," said Mr. Kiriyama.

Each year the plant collects around 100,000 tons of ash generated when household waste from Saitama and other prefectures is incinerated. The ash is then reborn as man-made sand, or Arc Sand, and used in cinder blocks and landscape features. In the process of calcination ー detoxifying and refining the waste ー the company also successfully extracts rare metals, such as gold and silver.

Recently in Japan, the term “urban mines” has come into use. According to the National Institute for Materials Science, waste from small electronics, such as computers and mobile phones, contains rare metals, such as platinum and lithium. They add up to amounts of the valuable materials comparable to the world’s most resource-rich countries.

The urban mine term refers to this resource-rich waste, which contains about 16% of the world’s total gold reserves, as well as 22% of its silver and 11% of its tin.

Still fresh in our memory are the 5,000 gold, silver, and bronze medals awarded at the Tokyo 2020 Olympic and Paralympic Games in July, August, and September 2021. They were all made from rare metals once used in personal computers and mobile phones. The metals were excavated from these urban mines under Japan’s Home Appliance Recycling Law.

Research studies at universities have shown that precious metals are also present in the ash produced from incinerating general household waste. However, until recently, no recycling plants were regularly extracting these valuables.

Koichi Shinohara, the former chairman of Tsuneishi Kamtecs, realized that plants in other countries were already doing this work. “Rare metals are recovered from incinerated ash in Europe. It should be possible in Japan too,” he believed.

He visited Europe in 2016 to investigate. The following year, in 2017, after considering multiple manufacturers, he acquired a machine called a Mobile Eddy Current Separator from the Danish precious metal recycling manufacturer Meldgaard Recycling A/S.

However, it was not easy to extract the precious metals right away. Experiments were conducted at the company’s Fukuyama plant in Hiroshima Prefecture, where its head office is located. But, unlike in Europe, gold and silver were not recovered.

At the same time, the company’s Saitama plant had been conducting its own experiments since June 2016, based on data that showed its Arc Sand might contain gold and silver. Researchers at the plant used a separator to extract the heaviest Arc Sand, then experimented with recovering gold and silver from it.

Yuki Onuma, deputy chief of the Research Center for Technology and Analysis Laboratory at the Saitama plant, explained: “Water absorption is one of the characteristics of finer-grained Arc Sand. Through trial and error we adjusted the settings of our separator, starting from grain size.”

The experiments showed that the size of the grains must be three millimeters or less. Working together with the manufacturer of the separator, the researchers homed in on the best settings and finally succeeded in extracting gold and silver from the Arc Sand.

This is how it works. Metals such as aluminum and brass are separated by the Eddy Current Separator from the incinerated ash carried into the plant by trucks. The ash is then superheated, and made into artificial Arc Sand. The Arc Sand is then ground into grain sizes three millimeters or smaller. Gold and silver slag are then extracted and sold to smelters.

“By extracting iron, aluminum, and other metals, and reducing the amount of ash, the burden on the furnaces can also be reduced,” said Kiriyama.

Gold and silver can be extracted directly from incinerated ash in Europe because of a process called “aging.” In the aging process, the incinerated ash is piled out in the open for several months and exposed to the atmosphere, which reduces heavy metals such as lead while simultaneously removing moisture and concentrating the ash.

At the Saitama plant, however, calcination, or superheating, was found to be more effective than aging.

In Japan, where available land is scarce, the small size of landfill sites has been a major issue. Therefore, the volume of waste has been reduced by incineration.

In addition, based on the lessons learned from pollution problems caused during the country’s rapid economic expansion, regulations on harmful substances, such as dioxins and sulfur sulfides, are strict. As a result, the furnaces in Japan have become world-class, designed with considerations for safety and security.

Trash is initially incinerated after it has been collected. Then, for that part of the incinerated ash which is not recycled, it is sent to a disposal site, such as Tsuneishi Kamtecs Saitama facility.

At Tsuneishi Kamtecs Saitama, almost 100% of incinerated ash is turned into artificial sand and recycled. At the same time, the company separates valuable resources in the trash using its own system. This "Tsuneishi method" kills two birds with one stone.

“The incinerated ash from general household trash in cities such as Tokyo and Osaka contains more valuable resources than the trash from less urban locations. Across Tokyo alone these could be worth ￥3 billion JPY ($24.5 million USD) per year,” Shinohara said.