Trump and Trade: Why Asia Has Much to Fear From US Protectionism 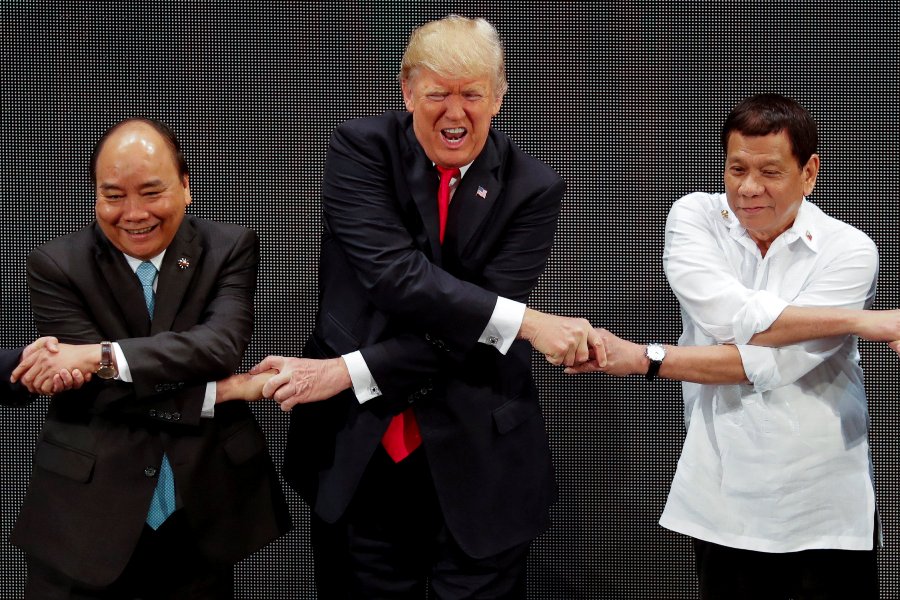 He speaks frequently of reaching “fair” trade arrangements, which benefit the US. In part, it was because of this and soon after Mr. Trump came to office that he blocked the Trans-Pacific Partnership trade agreement involving Japan—much to the frustration of Prime Minister Shinzo Abe.

The President has frequently taken to Twitter, condemning Japan for running a bilateral trade surplus with the US and for what he describes as “currency manipulation.” Mr. Trump has made similar complaints about China.

This bellicose language caused the Financial Times to suggest that President Trump’s visit to East Asia, which includes visits in Beijing and Tokyo, “retains the potential to cause havoc.”

Nonetheless, President Trump says his relationship with Prime Minister Abe “is really extraordinary.” He told reporters in Tokyo, “I don’t think we’ve ever been closer to Japan than we are right now.” At the Kasumigaseki Country Club golf course, the two leaders signed baseball hats bearing the words “Donald and Shinzo – Make Alliance Even Greater.”

The closest the President came to causing diplomatic havoc in Japan was during a speech in Tokyo where he said that more Japanese car manufacturers should build their cars in the US, rather than ship them overseas. In fact, more than three quarters of cars from Japanese manufacturers that are sold in the US are manufactured in North America.

Edward Alden, a senior fellow at the Council on Foreign Relations in Washington, says: “You can see how Trump’s philosophy of America First guides his agenda when it comes to trade. The consistent theme is how will a trade arrangement benefit the United States.”

The President’s speech in Tokyo was, however, less negative about the Japanese automotive industry than some reports suggested. According to the Washington Post, the President said: “Several Japanese automobile industry firms have been doing a really good job.” In particular, he praised Mazda for announcing it would invest $1.6 billion to build a new manufacturing plant, which would create as many as 4,000 new jobs.

That puts Japan in a relatively good position to reach a favorable trade arrangement with the US. Mr. Trump hopes to conclude bilateral trade deals with countries around the world, as these are simpler than the complex multilateral agreements, which can take decades to negotiate. He also believes that America’s position as the world’s largest market will give it a decided advantage during such negotiations.

Nevertheless, the business community in the US often discourages Mr. Trump from disrupting existing trade arrangements, fearing a trade war if another country retaliates. “Rather than gaining jobs through protectionism, in fact jobs could be lost,” says Eswar Prasad, senior professor of trade policy at Cornell University.

“If the US falls out of the supply chain, manufacturers might shift production abroad, which means factories would close in America.” 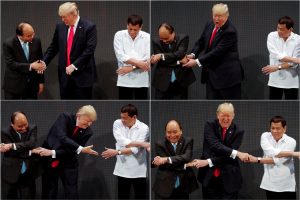 U.S. President Donald Trump and other leaders, including Vietnam’s Prime Minister Nguyen Xuan Phuc and President of the Philippines Rodrigo Duterte are handshaking in the opening ceremony of the ASEAN Summit in Manila, November 13, 2017.

Professor Presard also foresees geopolitical repercussions in East Asia: “The international influence of the US is eroding. It is no longer regarded as credible and reliable. Other countries are stepping in to fill the void. This is leading almost every country in the world, particularly countries in the Asian region, to re-evaluate their relations with the US and perhaps move closer into the economic and political embrace of China.”

Mr. Trump’s former advisor Steve Bannon claimed, just before leaving the White House, the US is entangled within a sort of “economic war” with China. America’s largest trading partner, China’s annual trade in goods and services is worth about $663 billion. After that comes Canada, Mexico, and then Japan.

However, Japan’s importance as a US trading partner is decreasing, while other Asian countries are growing in prominence.

As noted in Forbes, Japan accounted for 12% of all US trade 20 years ago, while today it accounts for only 5%. At the same time, the Japanese trade surplus ($69-billion last year) that Mr. Trump has complained about, accounts for a much smaller slice of the US deficit than in the past, while China’s imbalance is noticeably larger.

Even if there were to be a reduction in trade with the United States, Japan is still expecting to see its trade with Europe increase. The EU is currently in the final stages of concluding a trade deal with Japan.

So far, Mr. Trump’s tough rhetoric on economic nationalism has not resulted in substantive changes to US trade policy. That, admittedly, has been a welcome relief to the Japanese government led by Shinzo Abe, which fears a regressive, protectionist approach could harm Japan’s relationship with America and benefit its rival, China.

Duncan Bartlett is the founder of Japan Story, British blog on Japan and Asia. He was a former BBC correspondent in Tokyo, and is contributing this specially for JAPAN Forward.