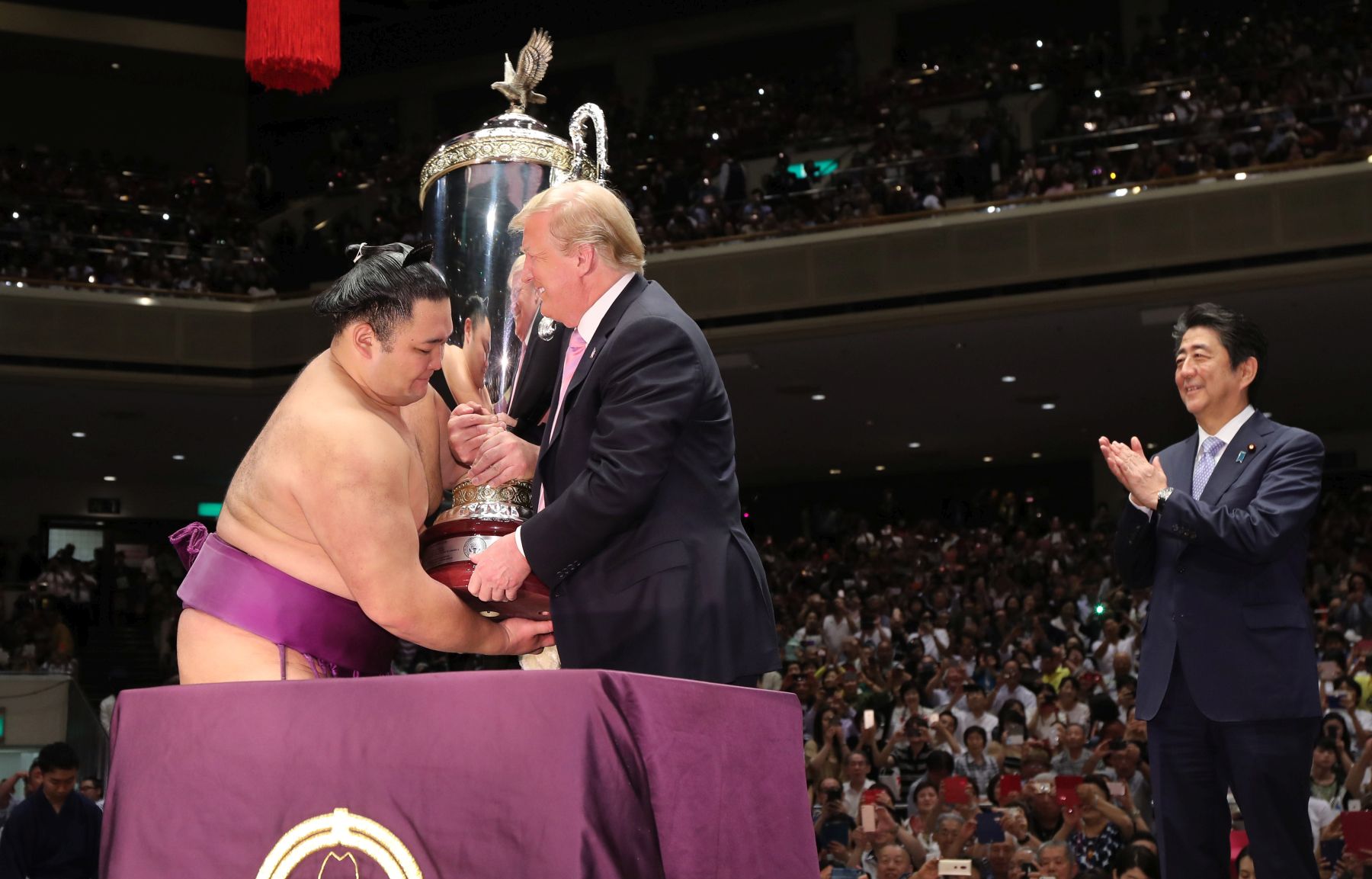 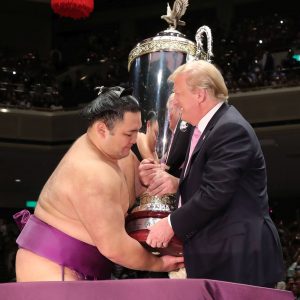 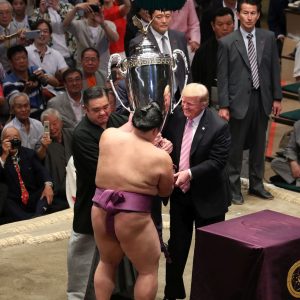 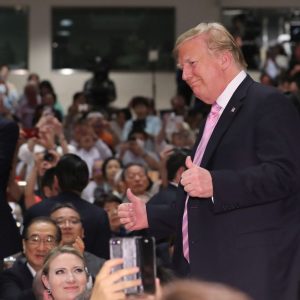 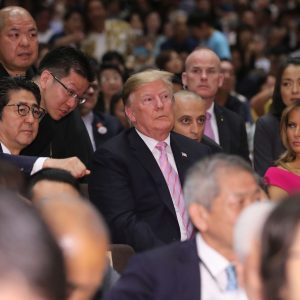 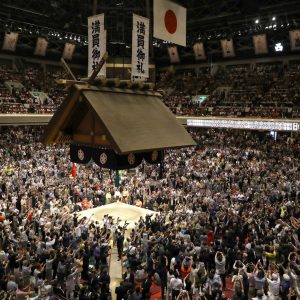 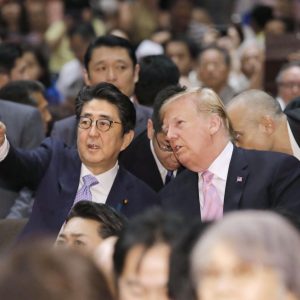 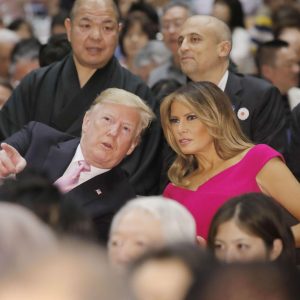 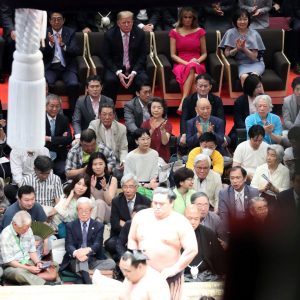 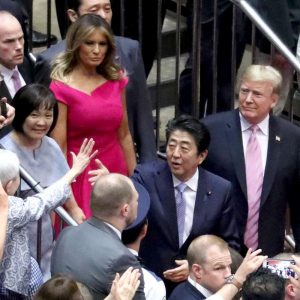 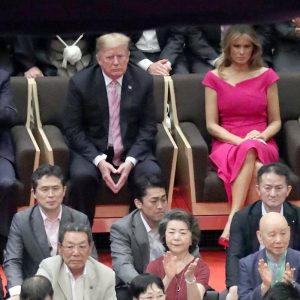 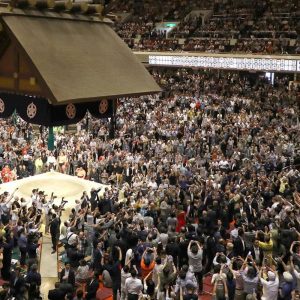 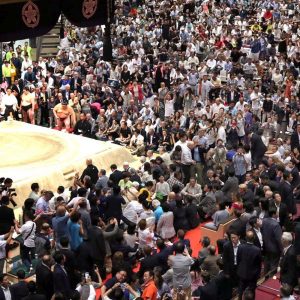 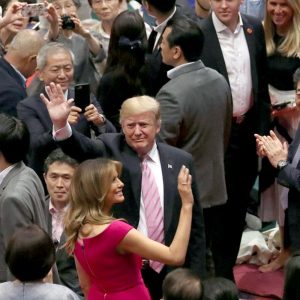 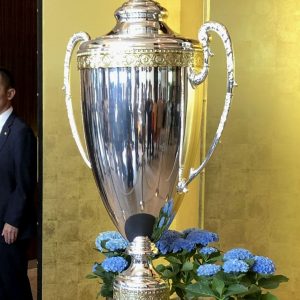 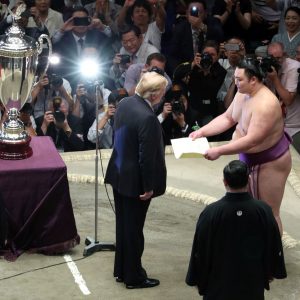 Despite the frequency of sumo tournaments, the atmosphere is different for every event, determined by its location and the wrestlers who fight. When special guests are added to the mix, the tension in the hall can be quite tangible.

It’s customary that the final winner takes away a variety of prizes from various companies, organizations, and international delegations, as well as esteemed recognition from the Japanese government.

Excitement at the May Grand Tournament at Tokyo’s Ryogoku Kokugikan Sumo Hall was particularly high when it was announced that United States President Donald Trump would join Prime Minister Shinzo Abe in attending the final matches.

President Trump arrived at the Sumo Hall just before 5 P.M. with his wife Melania, accompanied by Prime Minister Abe and his wife Akie. Their arrival was greeted with great fanfare as the full house stood up, clapping and snapping pictures with smartphones as they welcomed leaders of the two countries. The crowd was taken by such excitement that a special announcement was required to encourage people to take their seats so the tournament could proceed.

This followed President Trump and Prime Minister Abe’s golf match in Chiba Prefecture earlier in the day, under a glorious sunshine after an unusual May heatwave hit Japan during the weekend. President Trump is a known wrestling fan, and is even inscribed in the WWE hall of fame. 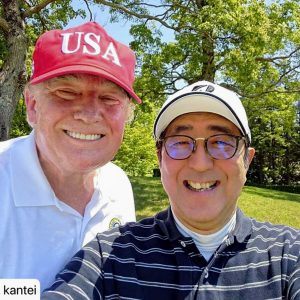 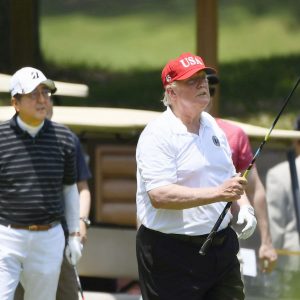 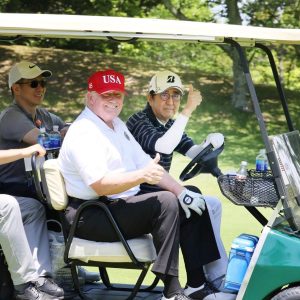 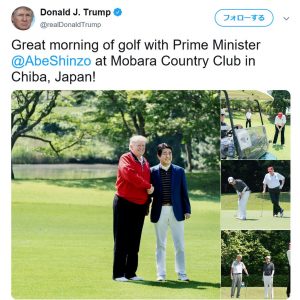 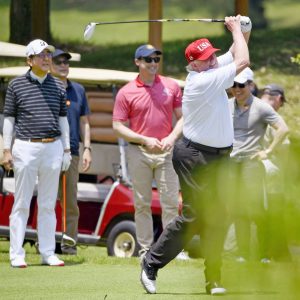 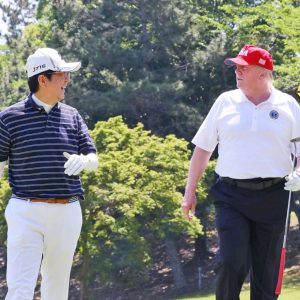 First From An American President

The plan to have President Trump give out a prize to the May Tournament grand champion was hatched in the U.S. after the two leaders met on April 26. Trump, who had previously expressed interest in sumo, made the announcement at a press conference following the April summit.

The trophy was awarded to the tournament grand champion, sumo wrestler Asanoyama, whose real name is Hiroshi Ishibashi, from Toyama Prefecture on Sunday evening, May 26.

Asanoyama sealed his victory the evening before, on May 25, after yokozuna and top sumo wrestler Kakuryu, who hails from Mongolia, lost against the Georgian wrestler Tochinoshin.

The cup itself is the first-ever “United States President’s Cup.” It is not called the “Trump Cup” as was widely but erroneously broadcast in the media. On May 25 it became known to the Sankei Shimbun Washington Bureau chief Yoshinari Kurose that the trophy would be 137 cm high (about 54 inches). NHK elaborated that it’s estimated to be 50 kg in weight, according to the live broadcast as the trophy was handed out. It was topped by a gold eagle.

This is the first time since 2007 that a major international leader has awarded a trophy to a sumo grand champion. Former French president Jacques Chirac, a well-known Japan lover, established the “President of the Republic of France Cup” in 2000. It was awarded until 2007, the year of Nicolas Sarkozy took office as president of France.

The May 26 proceedings were slightly adjusted to allow for Trump’s visit. Although normally people view the tournament sitting on tatami mats with square cushions with their shoes off, Trump was provided with a low chair on the ringside. Following security concerns, cans and bottles were banned in the venue and plastic cups were substituted. The resting area was also closed.

The last match of the tournament was between top rank yokozuna Kakuryu and ozeki Goeido. It was won by Kakuryu, who had lost to the new grand champion the day before.

The awards ceremony started just after 5.30 P.M. Although it’s common for organizations and dignitaries to offer awards in sumo tournaments, this was the first time an American leader has awarded a trophy.

The President’s cup was the fourth prize to be awarded, after the “Emperor’s Cup,” “The Winner’s Flag,” and the Japanese government’s trophy. The latter was awarded by Prime Minister Abe himself, who, after reading out the official prize title, even lifted the 40-kg trophy and handed it to the victor.

The American President then mounted the sumo ring and read out the award certificate, saying: “In honor of your outstanding achievement as sumo champion, I hereby award you the United States President’s Cup.” Soon thereafter he exited the venue while shaking the hands of people along the way.

The winning sumo wrestler was interviewed by NHK, the Japanese national broadcasting system, immediately after the awards. The new grand champion Asanoyama commented to the crowd of adoring fans in Ryogoku Kokukigan, saying: “I can’t put into words how happy I am. I have never been a Sanyaku (top sumo wrestler), so [looking to the new era] I want to work hard towards that aim.”

This was the first victory for the 25-year-old athlete, and the first tournament of the new era Reiwa, which started in Japan on May 1, 2019. 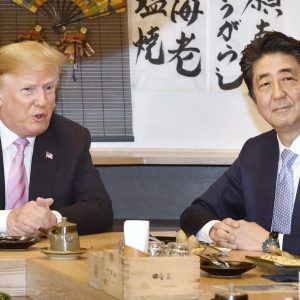 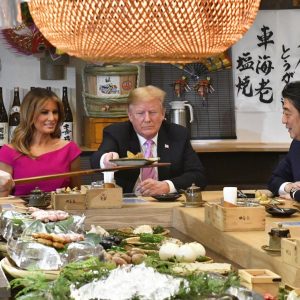 In the brief press coverage before the meal, Trump, commenting on the sumo tournament, said, “It was really nice and we really enjoyed being there.”

Referring to the history of Japan-U.S. relations dating from the two countries’ earliest contacts, he added that he hoped the award would be there for the next 200 years.

President is well known as a meat eater, and the choice of cuisine seems to be following the trend. On the previous visits Trump tasted teppanyaki, another traditional Japanese grill.

Other notable gourmet experiences for American presidents include Barack Obama, who was taken to the famous sushi shop, Sukiyabashi Jiro, in 2014, and George Bush Jr, who was treated to dinner at a traditional Japanese inn in 2002 by then Prime Minister Junichiro Koizumi.

On Monday May 27, President Trump is expected to meet the family members of Japanese victims abducted by North Korea, bringing the focus of the visit back to diplomacy and human rights.

On Monday evening, the new Reiwa Emperor Naruhito and his Harvard-educated wife, Empress Masako, are expected to host a state banquet for President Trump and First Lady Melania, making it the first visit by an international leader to the new Emperor of Japan.