WHEELCHAIR RUGBY | Japan Improves to 2-0 with Win over Denmark 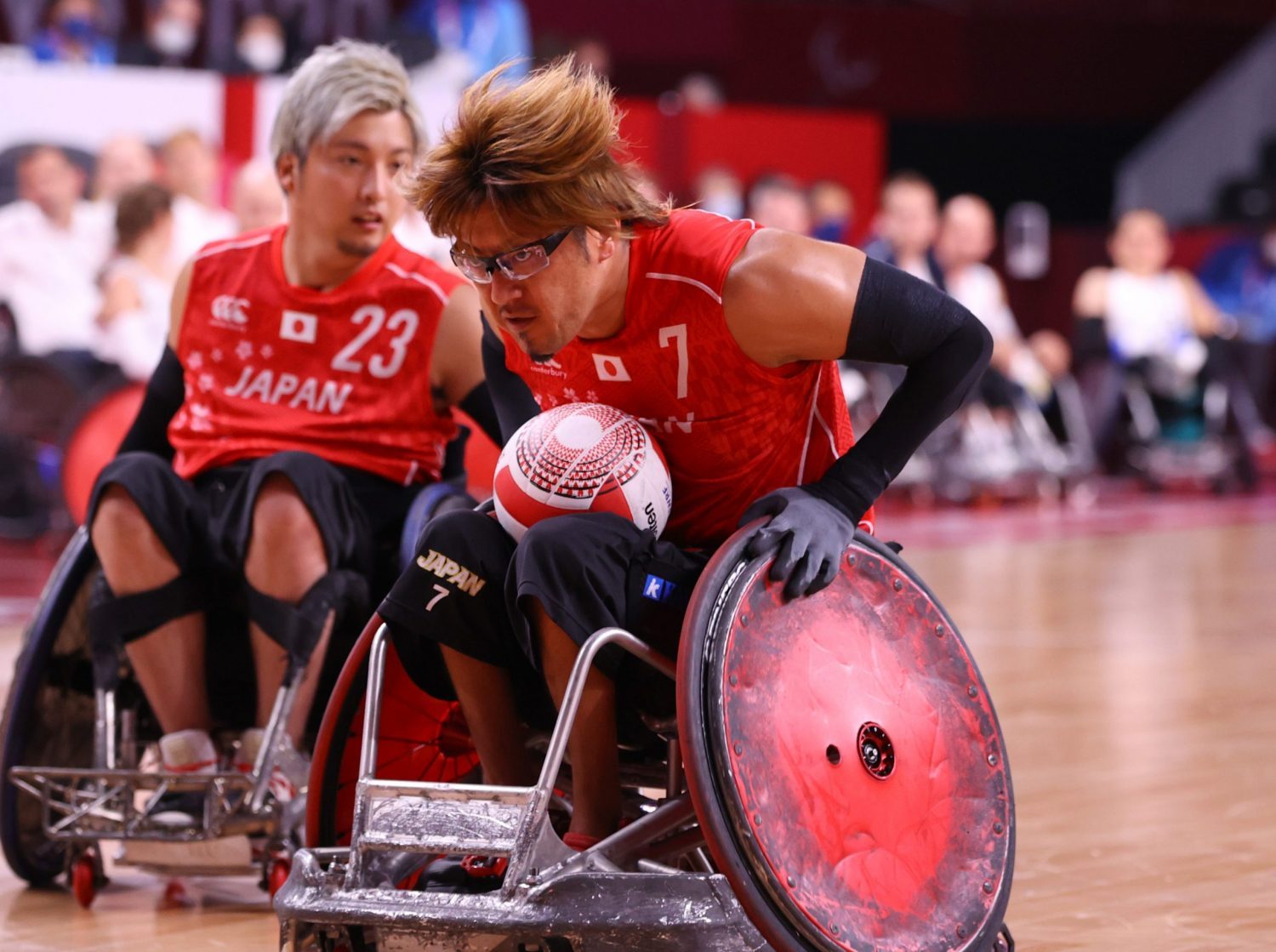 Daisuke Ikezaki carries the ball in Japan's Group A match against Denmark on August 26 at Yoyogi National Stadium.

Japan’s wheelchair rugby team is on a roll.

A day after defeating France in its opening game, Japan improved to 2-0 on Thursday, August 26 with a 60-51 win over Denmark in Group A of the Tokyo Paralympics wheelchair rugby tournament.

“We were confident that we’d be fine defensively if we played to our abilities,” 1.0-class player Hidefumi Wakayama, who scored five tries, told Kyodo News.

Japan won the 2018 world championships by beating Australia. That came after Japan lost to the Australians in the 2016 Paralympic semifinals in Rio de Janeiro.

Japan went on to take the bronze medal with a win over Canada in Brazil in what was the nation’s first medal in the sport.

The gold at the world championships was Japan’s first major title under head coach Kevin Orr, an American who took over the position in 2017.

International wheelchair rugby has seven different player classifications from 0.5 to 3.5. The lower the number, the more severe the level of impairment.

Ike, who scored 20 tries in the opening win over France, had his left leg amputated after he was involved in a traffic accident in which three of his friends died. Ike’s left hand was also seriously injured in the crash.

The 41-year-old native of Kochi, western Japan, took up wheelchair rugby in 2012 and went to the United States in 2018 where he played for the Lakeshore Demolition wheelchair rugby team for six months.

The 39-year-old Robinson lost both of his legs on his fourth tour of Afghanistan in 2013 with the Royal Air Force. He was injured by an improvised explosive device.

“While I was laying in hospital, I saw a leaflet advertising for wheelchair rugby and I saw a poster advertising for the Invictus Games and got involved in that,” Robinson told Olympics.com.

A Basic Introduction to Wheelchair Rugby

Wheelchair rugby is a mixed-gender team sport that was invented by a group of Canadian quadriplegic athletes, who were looking for an alternative to wheelchair basketball.

Contact between wheelchairs is permitted and players use their chairs to block and hold opponents.

Like it’s able-bodied version, wheelchair rugby has a high degree of contact. There are plenty of spectacular collisions that result in punctured tires and wheelchairs flipping over.

The aim of the game is for each team of four players to carry the ball over the opponent’s try line. For this to count, two wheels of the chair must cross the line and the athlete must be in control of the ball, which may be held in the lap.

From when possession is gained, a team has just 40 seconds to score a try. Players can pass or roll the ball in any direction but kicking is not allowed. They must dribble or pass the ball to another player at least once every 10 seconds, making time management an important tactical aspect.