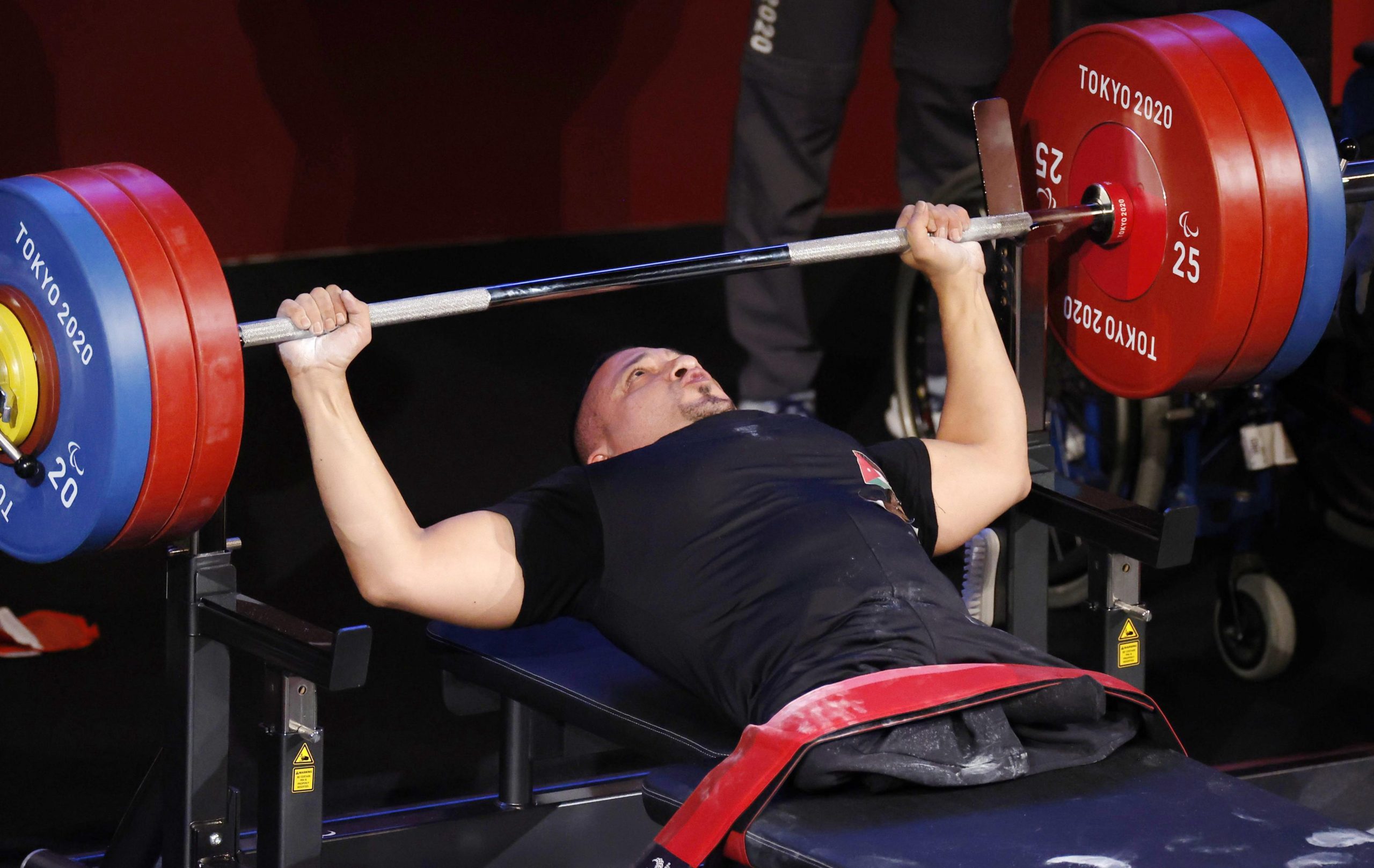 For a good chunk of his adult life, the Jordanian powerlifter has been chasing after Paralympic gold.

Finally, he wore a gold medal around his neck on Thursday, August 26.

The 40-year-old triumphed in the men’s under-49 kg final at Tokyo International Forum. A 173-kg lift, which came on his third attempt, secured the victory for Qarada, Jordan’s first-ever para powerlifter gold medalist.

Born without legs, the Amman native generates considerable power from his upper-body strength.

The 2010 world champion in the same weight class, Qarada received the under-49 kg silver medal at the 2008 Beijing Paralympics and repeated that feat eight years later in Rio de Janeiro.

Qarada, who weighs 47.21 kg, had the same top lift as Vietnam’s Le Van Cong. But the tiebreaker for the total (173 kg) is awarded to the lighter lifter, and Cong weighs 47.31 kg. Thus, the 37-year-old Vietnamese, the 2016 Paralympic champion, electronics technician and farmer, claimed the silver.

Azerbaijan’s Parvin Mammadov, the 2018 European champion, nabbed the bronze with a top lift of 156 kg on his second of three attempts. (Watch Mammadov’s display of strength in 2018 here.)

Qarada acknowledged after the competition that he and Cong have a friendly rivalry.

“I speak a lot to Le,” Qarad told reporters. “He is a friend. In Rio the same thing happened, we both lifted the same weight on our third lift, but in Rio it was Le stealing my gold medal. Today it was me who was able to steal the gold medal from him.”

What was Qarada’s reaction to winning the gold?

“It is a dream come true,” he said, “but it’s just a stepping stone for the Paris 2024 Paralympic Games, where I promise I will set a new world record.”

Japan’s lone entrant in the nine-man final, 56-year-old Hiroshi Miura, finished ninth. The three-time Paralympian had a top lift of 127 kg. Miura began participating in the sport at age 41.

He pursued a dream, however, despite the obstacles he faced and became an accomplished lifter. He placed fifth at the Rio Olympics.

“I was born in 1964, with the Olympic and Paralympic Games being held in Tokyo,” Miura said in a 2017 interview, according to paralympic.org. “I feel it is my destiny to compete there.”

Suzuki, who made his Paralympic debut in Athens in 2004, also collected a silver medal in the SB3 50-meter breaststroke final on the first day of competition in the pool on Wednesday, August 25.

He enjoyed the euphoria of victory in the Japanese capital with a Paralympic record-breaking time of 1 minute, 21.58 seconds. Suzuki completed the first half of the freestyle final in 38.89 seconds and trailed the leader at the midway point, Luigi Beggiato of Italy, by 0.59 seconds.

When the race was over, Suzuki said it took a little time before the reality of what happened became clear.

“I couldn’t see the moment I had finished the race, so I didn’t know if I was in first place, but when I saw on the scoreboard that I was in first place, I was so happy,” Suzuki was quoted as saying by Olympics.com. “I have been racing since yesterday, so I was worried about fatigue, but I tried to be confident, and I hoped I could increase my speed without straining myself.”

To clinch the gold, Suzuki knew he needed to finish strong.

“In the last 25 meters, my competitor was in front and then he started to fall, so I tried not to fall,” Suzuki told reporters.

In another swimming final on the same day, 32-year-old Uchu Tomita snatched the silver in the men’s S11 400-meter freestyle final in 4:31.69.

Tomita, a native of Kumamoto, was in fourth place after 50 meters, moved into third by the 150-meter mark and held steady in second place for the second half of the race.

In the S11 category, swimmers, blind or nearly blind, wear darkened-out goggles while racing. Tomita was diagnosed with retinitis pigmentosa, which causes a loss of vision, many years ago.

Both men had broken the world record in qualifying, with van Gass recording the best time (3 minutes, 17.593 seconds).

The 35-year-old van Gass was born in South Africa. He joined the British Armed Forces as a 20-year-old and was deployed to Afghanistan in the Parachute Regiment.

During his second tour of duty in the war-torn country, he was hit by a rocket-propelled grenade in 2009. Van Gass lost his left arm. Eleven surgeries followed to repair a variety of things, including collapsed lungs.

Eventually, van Gass became a skier, a mountain climber and a marathon runner, before turning his attention to cycling.

Looking back on his victory in Izu, van Gass described it as a “fantastic day.”

“I’ve worked very hard for this,” van Gass said, according to Olympics.com. “It’s nearly nine years of a lot of ups, probably more downs. It’s such a relief to finally be here representing Great Britain in Tokyo and coming away with the top prize. I’m very happy with myself.

“We’ve got to enjoy this moment but in a few hours’ time I need to reset, forget about all this and go again tomorrow.”

In the bronze medal race, Australia’s David Nicholas, who has cerebral palsy, defeated Spain’s Eduardo Santas Asensio, the former completing it in 3:25.877. The Spaniard finished in 3:27.83.

Kawamoto, 25, had his left leg above the knee amputated when he was an infant. It was the result of a bone tumor.

Despite the disappointment of not earning a medal, Kawamoto was grateful for the journey he took to return to the Paralympics (he debuted in 2016).

“I aimed at getting a medal for the people who support me,” he said after the race, according to Kyodo News.

Another shot at a medal awaits Kawamoto. He’s scheduled to race in the C1-3 1,000-meter time trial on Friday, August 27.

Organizers of the Tokyo Paralympics confirmed on Thursday that a person involved in the Games has been hospitalized with COVID-19, the first such case linked to the event.

The individual is a person from overseas linked with the Paralympics but not an athlete. The person was hospitalized after testing positive on Monday, August 22 and is not displaying severe symptoms according to organizing committee spokesman Masa Takaya.

Takaya emphasized that the organizers are delivering a “safe and secure Paralympic Games.”

The committee so far has reported 184 cases since August 12. It reported 15 more cases on Thursday, including two athletes from overseas who were staying at the athletes’ village.

The Paralympics started on Tuesday, August 23 and involve a record 4,403 athletes from around the world.

Tokyo and other parts of Japan have been under a COVID-19 state of emergency as the country grapples with a surge in cases caused by the highly-infectious Delta variant.