Why Int’l Financial Markets Turn Away From China-led AIIB

The China-led Asian Infrastructure Investment Bank (AIIB), with headquarters in Beijing, held its second annual general meeting on June 17. Speaking at a press conference held at the meeting venue on Jeju Island, South Korea, AIIB president Jin Liqun emphasized the success of the bank, which gained 80 member states and regions in the year and a half since its inception in January 2016. He urged the United States to abandon its cautious attitude toward the AIIB: “The door is always open.”

There are issues, however, about the AIIB. Here’s an analysis by Sankei Shimbun editorial team member Hideo Tamura.

The foreign reserves of China continue to dwindle, and would be exhausted if it stops incurring foreign debt. Having realized the limits of the dollar-oriented AIIB, the Xi Jinping administration is attempting to change the settlement currency for the “One Belt, One Road” Infrastructure Initiative to the Chinese yuan.

At the second general meeting of AIIB members on Jeju Island, South Korean companies and others competed to sell state-of-the-art IT infrastructure facilities. However with the AIIB as their target, it was a case of counting their chickens before they hatched. The credit source of AIIB’s dollar-based finance has a balance of 3 trillion in foreign reserves, but that’s only on paper.

Foreign investments and loans are a liability for China, however authorities carry out forced buying of foreign currency, combining these with trade surplus to create foreign reserves. This method is different from that of developed countries, such as |Japan, where the majority of foreign currency is held in the private sector.

Let’s look at the graph. Foreign reserves have been rapidly decreasing since peaking three years ago. In contrast, debts have been increasing rapidly; by the end of last year, they were more than 1.5 times the foreign reserves. If foreign investors and companies were to withdraw all their funds from China at once, the reserves would likely be exhausted. 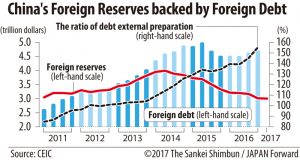 Japan, the world’s largest creditor nation, and the US, the home of the dollar, passed on joining the AIIB, which began operating at the beginning of 2016 using Chinese foreign reserves as show money. Naturally, international financial markets are turning away. Since western credit rating agencies have refuted AIIB’s rating, the AIIB cannot issue dollar-denominated bonds.

The AIIB was forced to accept co-financing from the ADB and the World Bank. At the end of May 2017, loan amounts were no more than US$2.1 billion, compared to authorized capital of $100 billion. Fearing unfavorable outcomes, many member states have become reluctant to pay the initially agreed deposits.

At the “One Belt, One Road” international symposium held in Beijing last May, President Xi Jinping announced that China would be providing 780 billion yuan (12 trillion yen) for infrastructure development. Due to the yuan’s poor reputation as an international currency, the only companies that are not inconvenienced by this are the Chinese government corporations. As such, South Korean and western companies are likely to be hesitant to accept orders.

Debtor nations will be further tied to trade with China in order to ensure yuan repayments. Having given up on the AIIB, the Xi Jinping administration will pressure neighboring countries with Chinese projects for the benefit of Chinese companies.

(Click here and here to read the original articles in Japanese)