With the All-New Impreza, Subaru Serves US and Japan Motorists’ Needs 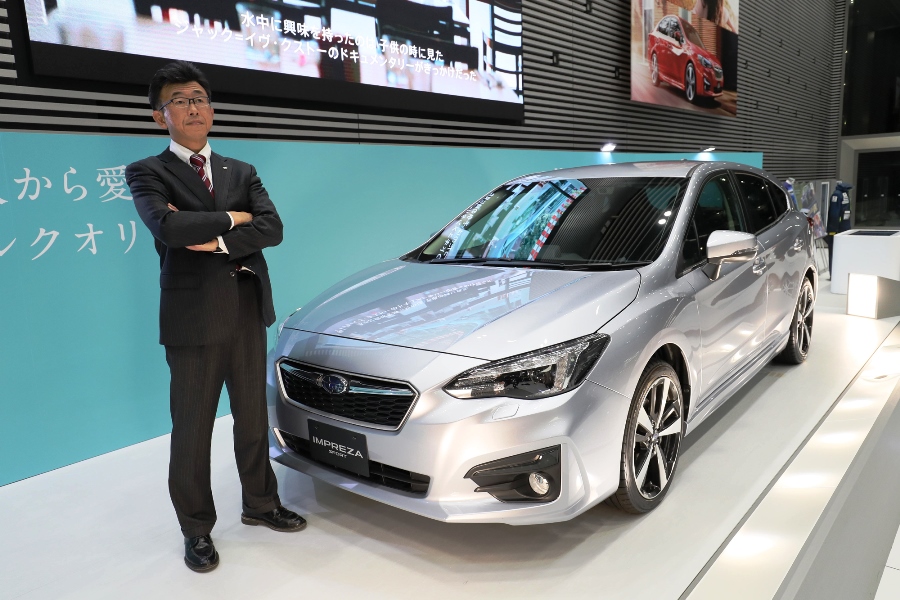 Kazuhiro Abe, general manager of the Product Planning Division of Subaru stands besides the new  Impreza

On sale since last October after a complete redesign, Subaru’s flagship small car, the “Impreza,” is enjoying robust sales. The newly designed platform (chassis), employed for the first time, gives improved stability and shock absorption in the event of a collision.

In the almost five months to March this year, domestic orders have reached 34,401 vehicles, clearly surpassing the sales target of 2,500 vehicles per month. Success has been borne out by measures to meet the conflicting needs of large-car-loving Americans and compact-car-driving Japanese.

The company’s worldwide sales for 2016 saw an increase of 3% on the previous year to reach 1,012,000 vehicles. American sales continued an eight-year trend of renewing the record for the largest number of sales ever, reaching 615,000 vehicles, and propelling Subaru over the one-million mark.

“[On the ground] the stable and safe image has penetrated the market, raising brand power,” said Subaru CEO Yasuyuki Yoshinaga.

For Impreza, “success in the US market was a major premise,” said Kazuhiro Abe, general manager of the Product Planning Division. Employing a new platform to increase stability and safety, and thereby increase competitiveness, was a cornerstone in the development.

“Make a car guaranteed to succeed in the US, but also fully understand the needs of Japanese consumers.” This was the directive given to Mr. Abe by CEO Yoshinaga when development began in 2013. 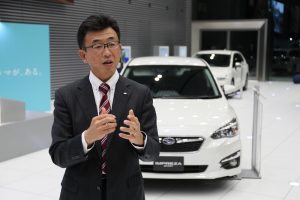 Abe explains how the new Impreza was born.

The new platform increases the stiffness of the body by 1.7 to 2 times, by incorporating the use of light and strong, high tensile steel, making it able to absorb 1.4 times more impact energy than the original model.

Moreover, lowering the vehicle’s center of gravity offers increased stability for straight driving and suppression of noise due to vibration. Although preceded by Subaru’s EyeSight driver assistance system, “the platform is the safety foundation,” Yoshinaga said. “Compared with what other manufacturers offer, the benefits [of the Impreza] are high.”

While pursuing safety as brand symbol was progressing well, for Mr. Abe the most difficult issue was CEO Yoshinaga’s directive to “consider the needs of the Japanese consumers [who prefer small cars].”

In America even for small cars, there is a trend toward making the interior roomier, so we were worried that consumers would think, they “were getting shortchanged if the car interior was smaller than that of competitors in the same price range,” Abe said.

“However, if we prioritize the American market and increase the body size, then there is the possibility of accidents when passing and maneuvering on the numerous narrow roads in Japan,” he added.

Having accepted the CEO’s directive, Mr. Abe then conducted twice-yearly interviews of sales staff at 3 different dealerships in Tokyo and Saitama, in order to accurately ascertain the needs of the Japanese market. Hearing from the staff that “the side mirrors touch when passing (on narrow roads),” and so forth, they were “able to gain development hints from fixed-point observations.”

Consequently, in line with the US consumer tastes, the width of the car body has increased by 3.5 cm. However, the width of the vehicle, including both side mirrors, has been maintained at 201.9 cm, the same as the original model’s. While the overall length of the vehicle has grown 4.5 cm, aiming to ensure turning ease, the minimum turning radius is 5.3 m, the same as the original model. The conflicting demands of both the US and Japan have been met.

In addition, the Subaru paid attention to the high proportion of pedestrians and cyclists among road fatalities. The Impreza became the first Japanese-made car to employ airbags on the exterior of the windshield, to protect pedestrians against injury in the event of an impact. “It was important as another item to increase consumer demand in Japan,” said Mr. Abe.

Last December, the new model Impreza won the 2016-2017 Japanese Car of the Year Award, identifying it as the best new car in the country. Selection committee members were impressed, saying, “It offers a high-quality driving experience due to the newly developed platform and so on, as well realizing state-of-the-art safety features, such as the pedestrian air bags.”

According to Mr. Abe, “In the American market, revenue and vehicle numbers are large. However, continuing to shine in the domestic market is important in terms of securing personnel and so forth.”

Impreza is a small car sold by Subaru since 1992. The vehicle’s name is derived from the English word “impresa,”  meaning “emblem” or “maxim.” The idea behind the vehicle is one of a nimble, sporty, innovative car, based on sound technology.