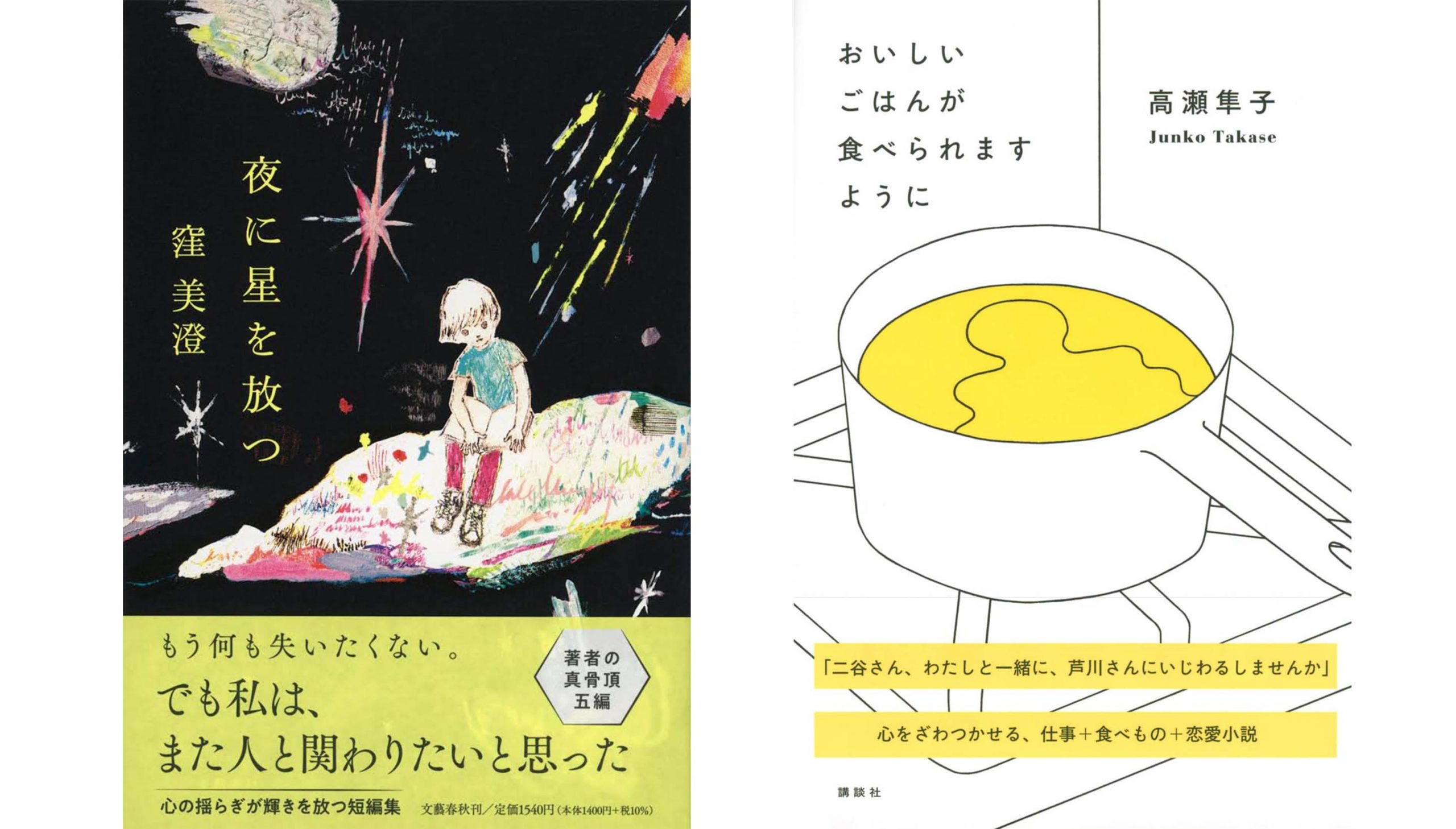 The Akutagawa Prize for up-and-coming authors was noteworthy this year due to the fact that all the nominees were women for the first time since 1935.

The Akutagawa Prize for up-and-coming authors was awarded this year to Junko Takase for her short novel published by Kodansha (2022) titled Oishii Gohan ga Taberaremasuyoni, (おいしいごはんが食べられますように | (So You Can Eat Delicious Food).

This is the second time she has been nominated for the Akutagawa Prize and the first to receive the award.

Misumi Kubo’s short story collection, Yoru ni Hoshi wo Hanatsu (夜に星を放つ | Releasing Stars Into the Night Sky) published by Bungeishunju (2022) has received the Naoki Award for popular fiction. Four women and one man were nominated for this prize.

Winners of Japan’s prestigious Akutagawa Prize and Naoki Literary Award were revealed on July 20. Taking top honors for both awards were works exploring themes of food and working relationships, as well as the expectation of new encounters after emotional trauma.

In the days after both awards were announced, a number of major bookstores were out of stock and delivery dates were uncertain. Recently, however, both books have finally begun to appear on bookshelves again.

Tsukiji, a traditional Japanese commercial neighborhood in Tokyo, was the venue for the announcement of the selection committee’s choices.

This year’s Akutagawa Prize garnered much attention since all the nominees were women, for the first time since 1935.

Committee member Hiromi Kawakami commented that the selection of authors was purely coincidental and never discussed during the deliberation process.

Akutagawa Prize was established in 1935 inspired by Ryunosuke Akutagawa.

Created in memory of the author Sanjugo Naoki, the Naoki Prize was established in the same year.

Takase’s novel depicts how three colleagues with varying temperaments and approaches struggle to maintain their personal relationships. Its protagonist is a man, and Takase says she was inspired to write the story after being told she “wasn’t good at writing male characters.”

According to Hiromi Kawakami, a member of the Akutagawa Prize selection committee and author, “It illustrates the complexity of human relationships in a small group. It brilliantly portrays the complexity of people who are neither good nor bad.”

In 2011, Kubo won the Shugoro Yamamoto Award for her debut novel Fugai Boku wa Sora wo Mita (ふがいない僕は空を見た | So We Look to the Sky, published by Shinchosha in 2012), which is also available in English.

Having been nominated for the award three times, Kubo said she was half-happy and half-frightened.

Kubo’s collection reflects on loss through the story of a woman who meets an ex-boyfriend of her twin sister who died before she was 30 and begins seeing him during the COVID-19 pandemic.

Among the authors who served on the Naoki selection committee, Mariko Hayashi said the collection is “pure and beautiful.” She also noted that it does not shy away from the COVID-19 pandemic, and is smoothly written.

In her speech, Kubo said “My first book was released when I was 44 years old. Since I have less time left than other up-and-coming writers, the challenge is to write quality content in the remaining time.

The winners will be given their awards at a ceremony in Tokyo in late August, with each author receiving a prizes of a wristwatch and ￥1 million JPY ($7,250 USD).