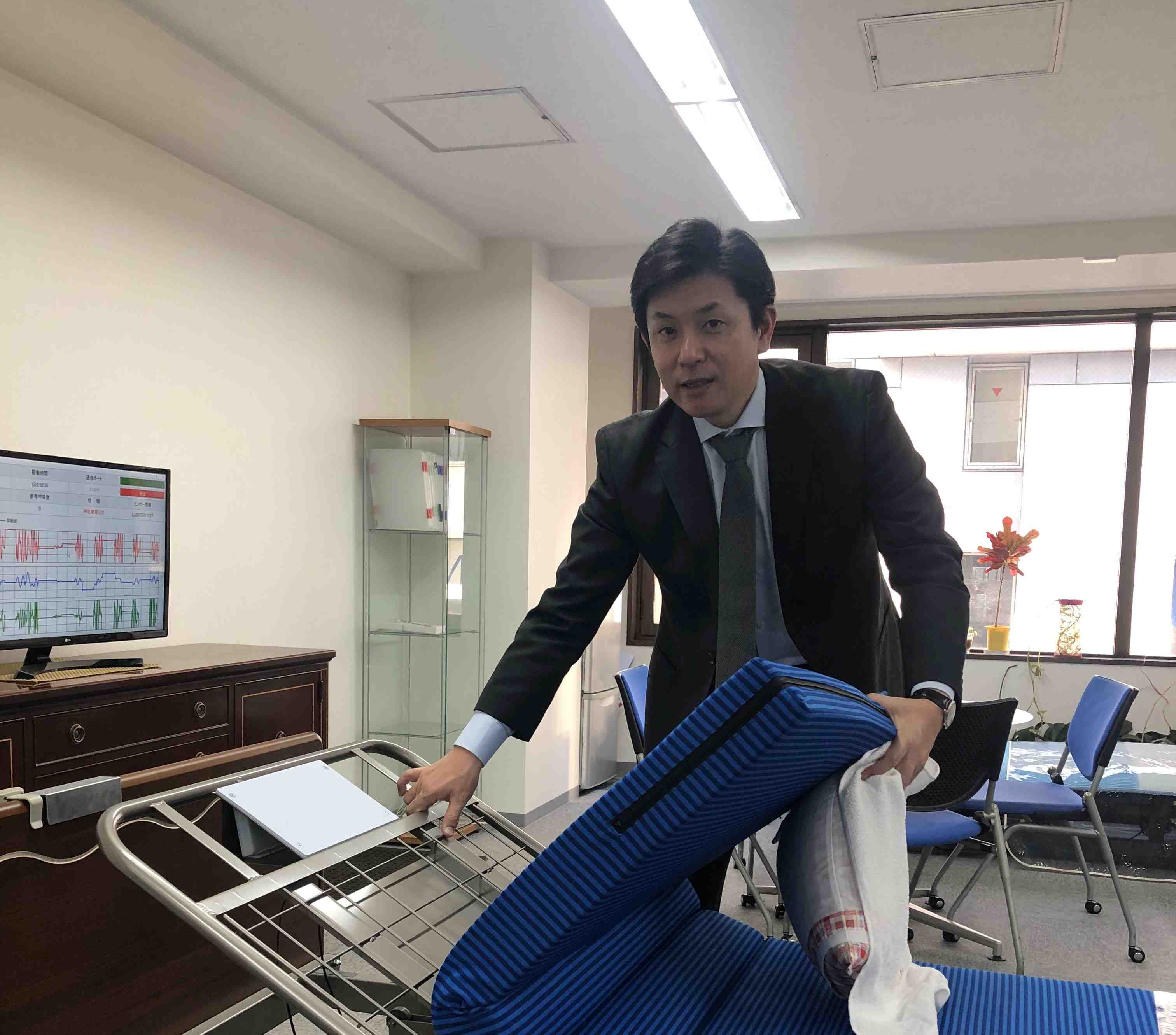 Description:  Yoshiteru Shichiri, the CEO of System Japan Inc., explains how the “Legame” sensor system works to analyze breathing and other vital data of a senior citizen simply by setting the sensor next to the pillow of a patient’s bed. 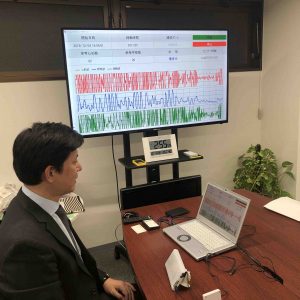 The Legame sensor placed at the lower right of a PC indicates waves of a patient’s body movements, breathing and heart rate, with the wave image of fluctuations shown clearly on the PC’s screen. 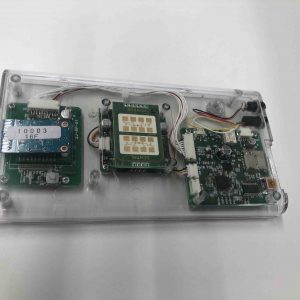 An innovative sensor system for infirm elderly patients has been receiving high marks, and expectations are rising that it may prove to be a boon in helping patients while reducing heavy caregiver workloads.

A simple state-of-the-art sensor set beneath the mattress of a bed, next to the pillow, or on the ceiling makes it possible for caregivers to be kept informed of the patient’s physical condition, including heart rate, even when they are not in the patient’s room. The system is aimed at helping the elderly avoid accidents, such as falls, by anticipating when they will get out of bed and alerting caregivers, according to the company that recently developed the sensing gear.

The risk of an older person suffering a fracture is at its highest when the patient tries to stand up just after getting out of bed, according to the system’s developer. Predicting the movements of the elderly can be all-important to mitigating the risk of a fall as they attempt to stand, the developer said.

A new device called ”Legame,” which means ”bonds” in Italian, is focused on this challenge. Developed by System Japan Inc. (Nihonbashi, Kabutocho, Tokyo), the retail price of the device stands at ¥150,000 JPY ($1,370 USD) per unit, not including tax. The product has been qualified for coverage by the government-run nursing care insurance plan.

“About 300 units of our system are already in use and have been rated highly by nursing care facilities and elsewhere across the country,” said System Japan CEO Yoshiteru Shichiri.

Up to now, unless they are in the same room as the patient, caregivers have found it very difficult to accurately foresee when a patient will try to get out of bed. Legame, however, has changed the equation by accurately analyzing changes in three major physical conditions of the patient: body movement, breathing, and heart rate, according to Shichiri.

”We could see the numbers change as we compared the predicted value of three factors, such as pulse and respiratory rate, while the patient is in a resting state, then moving into an unquiet phase, and finally to a bed-leaving stage,” the CEO explained. “Consequently, it became possible not only to be warned when a patient is leaving the bed, but also predict when he or she was going to try to get up from the bed.”

As a result of its work, System Japan Inc. successfully completed the first of its kind in the world ―a  sensor to predict bed-leaving.

Moreover, the Legame system’s built-in Doppler sensor responds to movement and can sense changes in respiratory rate and other factors without contacting the patient’s body, as long as it is within three meters of the patient. In general, conventional sensors using microwave technology are only able to take measurements while the patient is in a resting state.  They are unable to gauge changes in an individual’s physical condition while they are in motion or riding a vehicle, for example. However, the Legame system’s new analysis method makes it possible to take measurements ― without contact ― as the patient moves through different physical states.

Legame has the capability of precisely measuring the changes in physical condition if it is set beneath the mattress of a patient’s bed, next to the pillow, or on the ceiling of his or her bedroom. By inputting data of the patient’s resting state beforehand, the Legame sensor reacts to minute changes corresponding to his or her motions. It is thus able to issue four kinds of alerts: changes in heart rate, respiratory abnormalities, a getting-up alarm, and failure-to-return-to-bed alarm, the company noted.

The system is a non-contact, automated, and easy to operate. Caregivers can manage the data collectively for patients on personal computers using Wi-Fi, or monitor using their smartphones, System Japan technicians said. Therefore, family members who are separated from their parents can help look after them from afar, they said.

Yusaku Taniguchi, the president of Hibari Labo Inc., a Kagoshima-based company which markets Legame to nursing care facilities, assessed the system this way: “About 30 Legame units are now in use at five nursing care establishments in Kagoshima and Kumamoto. Workers there say the Legame units are a boon to them in that patient status can be monitored around the clock, while the frequency of regular patient checks and the caregivers’ workload have been mitigated markedly.”

He added: “Nursing care service user expenses increase ¥5,000 JPY ($45.7 USD) a month for a room equipped with Legame. But there have been an increasing number of inquiries about the system from prospective users.”

A System Japan technician who helped develop the Legame sensor said: “My father died because of dysphagia, a swallowing dysfunction. I could have saved his life if I had been aware of the changes in his condition in advance. That was a major reason for my decision to play a role in developing Legame.”

A sequence of technologies related to Legame have been patented as products covered by Japan’s long-term nursing care insurance program. In addition, they have been endorsed as safe and reliable by a national university.

Legame appears set to become an increasingly important force to solving the problem of manpower shortages in the nursing care in an aging society.