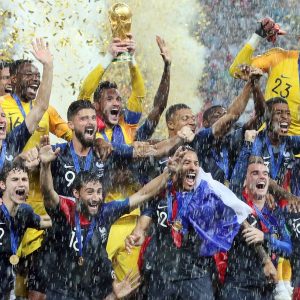 The curtain came down on one of the most enjoyable World Cups in recent memory on Sunday night, July 15. Hugo Lloris lifted the famous gold trophy aloft as the heavens opened in Moscow after France had beaten Croatia 4-2 to claim their second world crown.

The youthful Les Blues were deserved champions and their vanquished opponents worthy adversaries in a match that delivered a fitting finale to the month-long festival of football in Russia.

Japan departed at the midway point of the competition—heading home a fortnight ago after losing one of the tournament’s most thrilling games 3-2 against Belgium in the Round of 16. In more ways than one, the Japan Football Association (JFA) should now be considering the French example if they want to build on this year’s achievement.

Akira Nishino’s side had arrived in Russia with very few expectations on their shoulders. Not many inside or outside the country expected them to leave much of a mark on the 32-team World Cup showpiece.

A sensational 2-1 win over Colombia in their opening match changed the mood entirely, though. It was followed with a spirited 2-2 draw with Senegal, in which they twice came from behind to level the score.

Some curious tactical tweaks saw the team almost slip up in their final match against already-eliminated Poland. Japan lost 1-0 but managed to squeak into the knockout stage of the competition on fair play points after Colombia held off Senegal by the same score.

They then suffered a few scares in the first half of the clash against Belgium, but also gave as good as they got going forwards. With things scoreless at half time and the Red Devils looking a little rattled, the tie remained in the balance.

An explosive start to the second period blew proceedings wide open. Goals from Genki Haraguchi and Takashi Inui handed Japan a commanding 2-0 lead and left them on the verge of history and a first appearance in the World Cup quarter-finals.

Here, however, a lack of composure cost them. Belgium’s “golden generation” were now left fighting for their lives and began to press forward with greater intent. The latest questionable piece of goalkeeping from Eiji Kawashima enabled them to pull one back through Jan Vertonghen before Marouane Fellaini equalized five minutes later.

Nevertheless, Japan refused to give up. Disregarding the fear of conceding again, they instead committed men forward in search of a winner rather than holding out for extra time and the chance to regroup.

With seconds left on the clock they were to be cruelly punished for such a positive approach. Kevin De Bruyne carried the ball forward on a lighting counter after a Japan corner, which concluded with Nacer Chadli stroking home to break Japanese hearts.

Despite losing the game, the players had more than restored their reputations. They received a heroes’ welcome upon their return to Japan and leave the future looking a lot rosier than it had on the eve of the competition.

With the dust having settled a little, however, there are now several big issues to be dealt with as the team looks ahead to next year’s Asian Cup, and beyond to the 2022 World Cup in Qatar.

Captain Makoto Hasebe and talisman Keisuke Honda have both announced their retirement from the international game. With Nishino stepping aside, it also remains unclear who will be in charge of the team.

There is a core to build upon in Hiroki Sakai (28), Maya Yoshida (29), Gen Shoji (25), and Gaku Shibasaki (26). The latter in particular came of age at the World Cup and demonstrated that he is the clear heir to Yasuhito Endo’s throne in the center of the park.

There is also a group of exciting prospects who have the potential to carry the hopes of the nation on their shoulders at upcoming competitions.

Kosuke Nakamura (23), Yosuke Ideguchi (21), Kento Misao (22), Ritsu Doan (20), Takefusa Kubo (17), Shoya Nakajima (23), Yuya Kubo (24), Takuma Asano (23)—the list of talented youngsters is long and exciting. The problem, however, is that of them only Nakamura was able to learn from the experience in Russia firsthand.

The French team that swept to glory had 15 players aged 25 or under in their squad, whereas Japan had just six. Of those, only two made it onto the pitch for the Samurai Blue. The difficulty now will be transitioning smoothly to the next generation.

Whoever is tasked with succeeding Nishino needs to be willing and able to integrate these youngsters—and the others that emerge—as soon as possible.

Hajime Moriyasu is one name in the mix. As head coach of the Under 23s, initially he seems a smart choice. But adding Asian and World Cup preparations to the to-do list of a man already tasked with leading Japan into the Tokyo Olympics looks like a heavy workload indeed.

Jurgen Klinsmann, who helped lay the foundations for Germany’s re-emergence as a global power, has also been linked to the job. He underwhelmed, however, in his last role in the U.S. and would be something of a left-field appointment.

There has been nothing concrete yet concerning the erstwhile Arsenal manager Arsene Wenger. The Frenchman is the standout candidate, an avowed Japanophile after his spell in charge of Nagoya Grampus Eight, and renowned for focusing on developing young, technical players.

It would represent a sensational coup on the part of the JFA if they could land the 68-year-old. But, if they truly want to move up to the next level, then they should be pulling out all the stops to bring him back to Japan.

Under Wenger a new generation of talent could thrive, establishing Japan as one of the teams to watch in the coming years and marking the 2018 World Cup as the latest stage of a process rather than the end of an era.