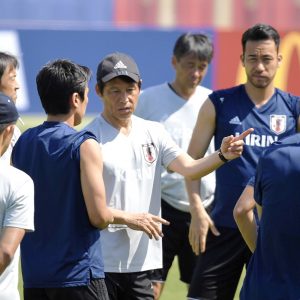 Lady Luck has undoubtedly been shining on Japan thus far at the World Cup, with Akira Nishino’s side getting the rub of the green on more than one occasion as they progressed to the Round of 16 for just the third time in their history.

Four years of preparation, a change of manager two months before the tournament, a whole host of acrimony behind the scenes—and yet 170 seconds was all it took for the Samurai Blue to be handed a golden ticket in Russia.

Yuya Osako broke in behind the Colombia defense and David Ospina saved his tame effort. Shinji Kagawa fired the rebound goal-wards and Carlos Sanchez instinctively stuck out a hand. A penalty, a red card, and after Kagawa converted the resultant spot-kick, Japan was a goal and a man up against the group favorites.

That state of affairs seemed to surprise the players on the pitch as much as it did the millions watching back in Japan. For a spell they froze. Uncertain whether to stick or twist, they did neither, and when Juan Quintero equalized in the 39th minute, it looked as though the chance had gone.

A rejuvenated second half showing wrested control back from Los Cafeteros, though. When Osako headed home a Keisuke Honda corner with 17 minutes to play, it was no more than Japan deserved.

Four days later the team repeated the trick, coming back off the ropes twice against Senegal to pick up a hard-earned 2-2 draw. That left qualification firmly in their hands heading into Thursday’s final group game against an already-eliminated Poland.

There, again, Japan got lucky. Incredibly so.

Things didn’t click, partly on account of the need to rest key players because of the heat in Volgograd (an unpalatable 36 degrees Celsius at kick-off) and partly because the coach was maybe trying to be too clever with a switch to an unfamiliar 4-4-2 formation.

Eiji Kawashima, at fault for goals conceded in each of the team’s first two games, pulled off a save-of-the-tournament contender to deny Kamil Grosicki in the first half. He also reacted smartly to prevent Tomoaki Makino scoring an own goal in the 81st minute. But in-between, the 35-year-old was beaten by Jan Bednarek, leaving Japan a goal down and on the brink of elimination.

Here, again, the cards fell in their favor. A Yerry Mina header in a match 400 miles away put Colombia 1-0 up against Senegal. That score meant Japan was level with the West Africans on all deciders, except fair play points, on which the Samurai Blue were ahead.

Nishino knew this and rolled the dice. Via captain Makoto Hasebe—sent in as an 82nd-minute substitute—he ordered his players to down tools and stop attacking, instead focusing on making sure they didn’t concede again. This was a big risk as a Senegal equalizer in Samara would have knocked Japan out. Fortunately, the final 10 minutes of both games passed without incident—literally in Volgograd, as a compliant Poland joined Japan in doing no more than running down the clock—to see Japan ushered into second place.

That performance drew plenty of censure from neutrals and pundits around the world. Many noted the irony of Japan becoming the first team to progress to the World Cup knockout stage on fair play points by closing out the game in such a morally-questionable manner. But, ultimately, they did what was required of them.

And that in itself should be worthy of praise.

Japanese teams are often accused of lacking the edge needed to secure results by any means necessary—including by previous coaches Vahid Halilhodzic, Javier Aguirre, and Alberto Zaccheroni. Here, though, they were professional to the last, deciding their fate ruthlessly.

That wasn’t the first positive to be garnered from their opening three games either. At times, the Japan side controlled matches very well, with Gaku Shibasaki and Takashi Inui causing opponents plenty of problems with their unpredictability and desire to make things happen. They also exhibited a hitherto lacking resilience to re-establish the lead against Colombia, then in the next match equalize twice against Senegal.

Issues remain defensively. The team failed to keep a clean sheet in the group stage, and the age-old lack of a lethal striker remains a concern. Key players, though, have also made big contributions to offer encouragement in both areas.

Maya Yoshida has marshaled the back-line impressively, keeping his concentration well, using the ball efficiently, and making sure he leads by example, whether partnered at center-back by Makino or Gen Shoji.

Honda, meanwhile, has relished his role as super-sub, coming off the bench to set up Osako’s winner against Colombia and then himself scoring just six minutes after his introduction to make it 2-2 against Senegal. That made the 32-year-old the first Japanese player to score at three World Cups, and he will be desperate to add to his four goals against Belgium on Monday, July 2.

His level of desire, self-confidence—arrogance almost—is exactly what the team needs at this stage of the competition. Fortune has been on their side so far, but the breaks can’t keep coming their way.

Now the onus is on Japan. It is time for the Samurai Blue to make their own luck.