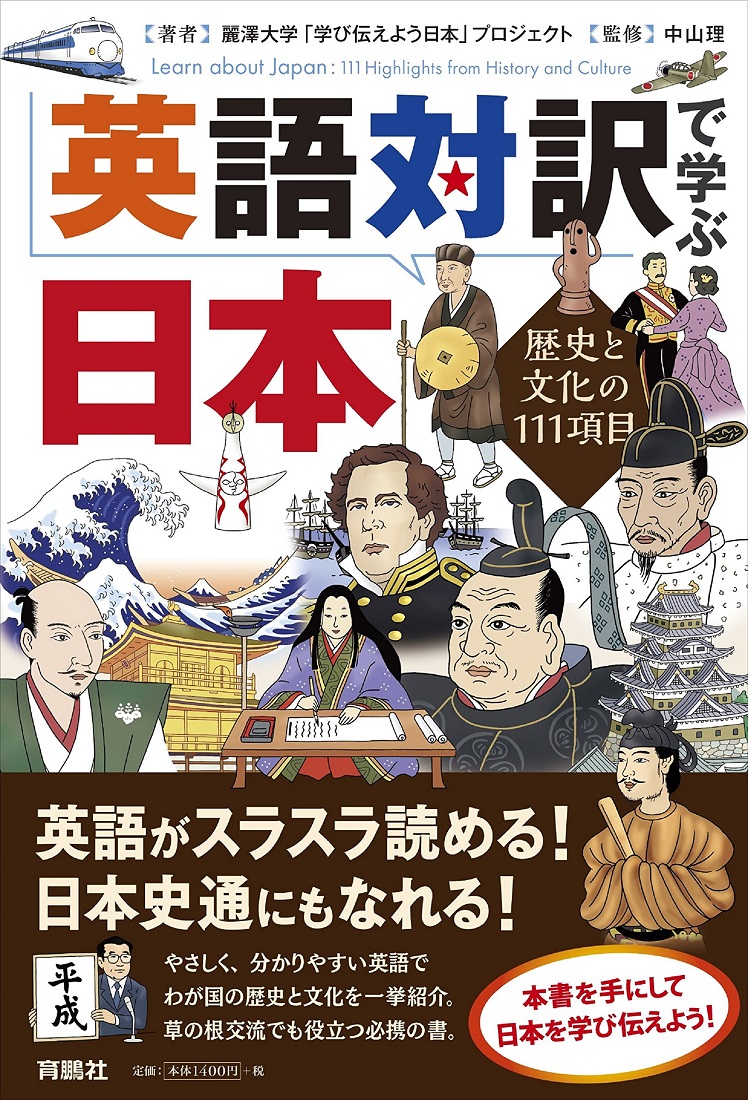 Repairing the Shosoin, the National Treasures in Nara

The repaired Office of the Shosoin Treasure House, Imperial Household Agency in Nara.

A new book is out making Japanese history far more accessible to the English-speaking world. The book, 英語対訳で学ぶ日本 ー 歴史と文化の111項目, covers 111 highlights from Japanese history, providing the same information in both English and Japanese.

Although targeted primarily at Japanese, this book should also be useful to foreign students of Japanese. The middle-school level means that the content is substantive without being childish or overly technical.

This work is particularly well-suited to language learning—not just because of the idiomatic English translations of each subject, but because expressions such as “stand-off” or “full-fledged” also have supplementary explanations in Japanese. Even more welcome are the readings given in hiragana for persons, places, and institutions that appear in the narrative of pre-modern and early modern history.

The format is called taiyaku 対訳 in which the same text in Japanese and another language—most commonly English—appear on facing pages or, less commonly, on the upper and lower halves of the same page. Currently, amazon.co.jp lists hundreds of titles in this format, ranging from the Bible to Alice in Wonderland and various industrial standards. Classics of Japanese, European, and American literature are available in this format, as are biographies of Apple co-founder Steve Jobs and other prominent business figures.

Most taiyaku appear to be directed at Japanese learning English. There is also a distinct subcategory that is intended to help native speakers of Japanese introduce and explain things Japanese to foreign visitors and business associates, or to help Japanese stationed or studying abroad to explain Japan to people in their host country. As such, a number of the taiyaku in this genre have been aimed at corporate employees and have focused on Japanese business customs, such as lifetime employment and consensus building.

This book belongs to this subcategory of books to be used as aids in explaining things Japanese, but it is not concerned with business culture and does not explicitly target corporate employees. Rather, according to the “Afterword” to the volume, the goal is to provide Japanese with the knowledge and English terminology to explain the spirit, history, and culture behind the Cool Japan movement that became the object of official government promotion beginning in 2010.

The book, it should be stressed, does not focus on manga, anime, cosplay, and other aspects of Cool Japan (or Japan Cool) as it is generally conceived. Rather, it delves into the intangible spiritual, historical, and cultural context of Japan.

In both content and language, the text has been deliberately kept at the Japanese middle school level—grades seven, eight, and nine—with each topic being treated in the terse, skeletal style that is used in Japanese school textbooks. As such, controversial historical subjects do not appear. Their absence is not, as many foreigners claim, because such issues are hidden or not taught in Japan, but because they appear in high school-level textbooks.

This book is a good introduction to the way historical and social subjects are taught in Japanese compulsory education. Japanese school textbooks are very slim compared to those used in the United States, with any single subject given only a few lines or at most a few paragraphs of treatment.

The organization is generally chronological, starting from the prehistoric Jomon and Yayoi cultures, and ascending to the 1990s real estate and stock market bubble and beyond. Aside from the historical narrative, there are articles on subjects such as the Japanese climate, anime, Japanese festivals, etc., and an appendix listing World Cultural Heritage Sites in Japan.

Foreign readers who only know about Japanese school textbooks from the claims made by foreign journalists, who do not appear to have actually looked at any of the textbooks currently in use, may find some aspects of this book quite surprising. I have repeatedly seen it claimed by foreigners that Japanese ignore or downplay the degree to which learning from China or Korea was important. However, continental input is in fact stressed in this book, not just in terms of culture and technology but also in terms of continental migrants to Japan.

I wish there had been a text such as this for help with historical research when I was first learning Japanese. We were given texts that were fiendishly difficult in terms of vocabulary and unexplained references, and which were also often written in an opaque and convoluted style, requiring us to learn on a sink-or-swim basis. It would have been much better to have learned gradually using bilingual works of progressive difficulty such as this volume.

[Learn About Japan: 111 Highlights from History and Culture]

By Kazuhiro Miyashita and Tomitaro Hashimoto