150 Years of Japanese Trains: From Hokkaido With Love 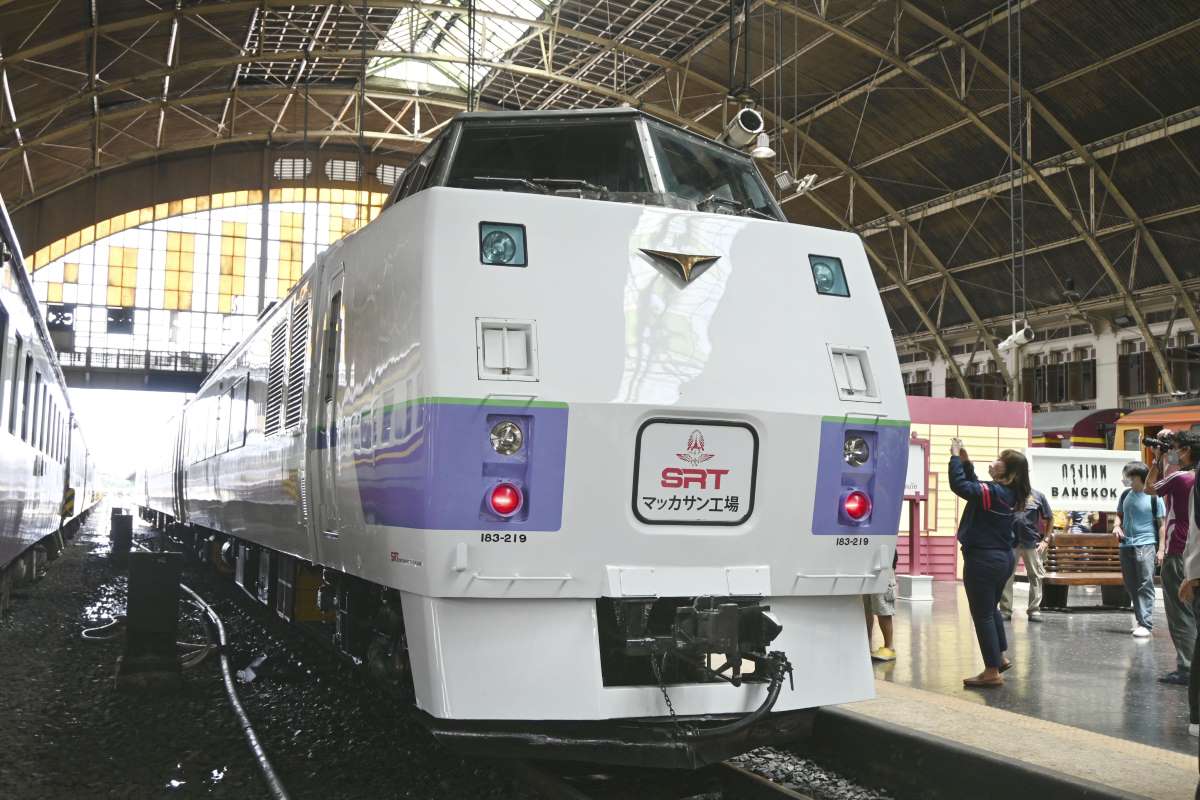 A train from Hokkaido with a new lease on life arrives at Bangkok's Hua Lamphong Station on a trial run. September 6, 2022 (Kyodo)

They were built for snow. Lots of snow.

The 17 Japanese passenger train cars painted in white and lavender are diesel powered to effortlessly plow through meters of fresh powder. The slanted nose of the locomotive helps to prevent snow from sticking to the front of the train. And the train driver cabin is elevated to improve visibility in harsh weather conditions.

The carriages formerly served as the "Okhotsk" limited express train connecting Hokkaido's main city Sapporo with Abashiri on the eastern coast of Hokkaido. It's a place famous for its drift ice in the Okhotsk Sea during winter.

Soon, instead of the cold, the train will be feeling the heat of the tropics. JR Hokkaido has donated the fleet of 17 cars from the KIHA 183 train series to Thailand after putting it out of service in 2016. With the kingdom covering the shipping costs from Japan's northern prefecture to Thailand, the carriages arrived at the port of Laem Chabang about 100 kilometers south of Thailand's capital Bangkok at the end of last year.

After landing in Thailand the train had to be refitted to accommodate not only the different climate, but also the different railway gauge. While trains in Japan mostly run on a 1.067 meter gauge, the Thai system uses only one meter wide tracks. State Railway of Thailand (SRT) spent  42.5 million Thai BHT ( $1.1 million USD) for shipping and will pay another 3.4 million BHT ($89,000 USD) to modify and repair the train cars.

The costs of getting the 40-something years old train carriages back on track have not pleased everybody.  SRT chief executive Nirut Maneephan has had to defend his decision, pointing out that getting the second hand train refitted was a lot cheaper than buying a new one. "Used Japanese train cars are of high quality and can still run for years to come," he recently pointed out to critics.

The donated cars are not the first from the KIHA 183 series to have their final destination in a tropical climate. In 2008, Japan gifted 19 decommissioned KIHA diesel cars to Myanmar Railways. JR Kyushu reconditioned the units for use overseas, and the newly adapted train started to operate in 2009.

The cars then ran on the route from the temple city Mandalay to the modern capital of Myanmar, Nay Pyi Taw. It's a journey of about 250 kilometers, or five hours. The train ran until 2012, when Myanmar Railways discontinued the use of the KIHA 183 series.

For Thailand's railway, the train from Hokkaido is not the not the first Japanese addition to its rolling stock. A former Japanese first class sleeper car is running on some services between Bangkok and Chiang Mai, a city in the North.

The refurbished train from Hokkaido will be circulating on shorter routes. Where exactly is still not clear.

"SRT hopes the KIHA 183 trains will play a big part in promoting tourism in Thailand," SRT chief Maneephan said. With tourists slowly returning to Thailand after the start of the pandemic in 2020 Thailand is looking at new ways to stimulate the sector. Train tourism is one of the plans.

Presently, not many tourists travel through Thailand by train, however. It's an experience that mostly attracts backpackers and other people with plenty of time on their hands seeking a unique way to see the country.

Train travel has almost entirely been superseded by bus and air. Many Thai people last traveled long distances on a train in their childhood.

However, it is easy to see the appeal of railway travel. Thailand has some beautiful train stations. Bangkok's main railway station, Hua Lamphong, is one of them. It is a formidable 19th century building with high ceilings and stained glass windows that elude old world charm.

Granted, the station and its trains are a long way away from the glamor and luxury of the Orient Express. But the atmosphere is special. A group of Buddhist monks in orange robes are waiting on wooden benches in the station hall. Some Western tourists with backpacks are making their way to one of the platforms. A food vendor is sitting on the stone floor patiently waiting for customers, with his bicycle next to him.

The Hua Lamphon terminus itself was supposed to close at the end of 2021. It was scheduled to be turned into a museum and replaced by a brand new rail hub in Bangkok's Bang Sue district ー a less central location. However, the plan has not been very popular with the public and the move of the main station has been delayed.

There is now talk that maybe at the start of 2023 the first train services will be shifted to the modern station. But as of now, the refurbished Hokkaido train is still supposed to depart from the century old station to a popular tourist destination relatively close to Bangkok.

The historic beach town of Hua Hin, 200 kilometers from Bangkok could be a possible route.  Another option would be Ayutthaya, the ancient capital of Thailand, with its ruins and temples. Although it's just 70 kilometers away from the capital, given the modest speed of Thai trains, it's still a two hour train ride away.

The Thai Hokkaido train has been repainted in its original colors. And it keeps some of its Japanese elements, like posters and Japanese writings, to give passengers a taste of Japanese retro train travel.

"They will offer tourists a brand new experience", says Maneephan. In early September, the first trial run with three cars from the Makkasan railway yard in central Bangkok to a neighboring province 70 kilometers away went without a hitch.

The former Hokkaido train was originally scheduled to start regular operation in October. But now it is more likely to start at the end of the year for sightseeing trips that give visitors a taste of train travel in Hokkaido without leaving Thailand.