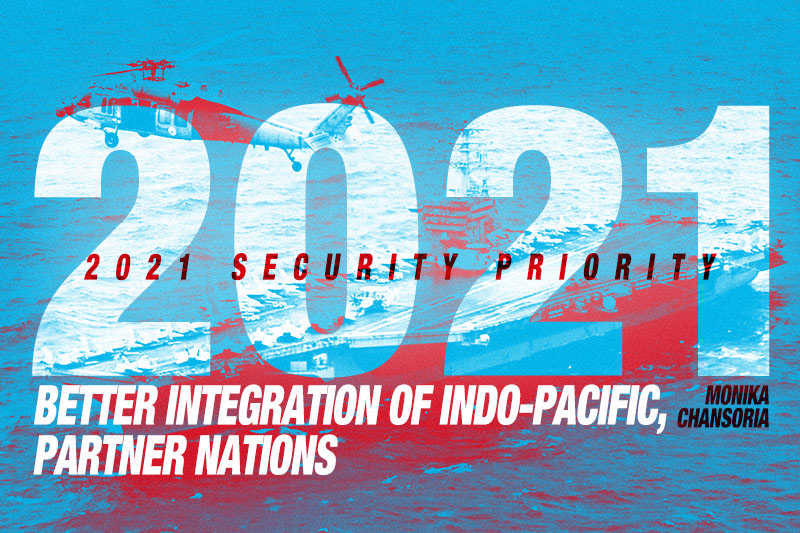 The year 2020, in an expression, was unprecedentedly devastating. The global pandemic caused by the COVID-19 virus that originated in Wuhan (China) in late 2019 resulted in the catastrophic loss of human life, destruction of economies, and human livelihoods. Fittingly, traditional calligraphy character 密 (mitsu), meaning “density or overcrowding,” was the chosen kanji of the year, best representing the rules the world has learned to live by.

In the security and foreign policymaking realm, the Wuhan-centered pandemic triggered an overhauling of the security agenda in many countries and regions. This includes a noticeable international pushback against China, with a concurrence on devising strategies to boost economic resurrection and development while strengthening the strategic environment across the Indo-Pacific.

COVID-19, for that matter, has undeniably reshaped the geostrategic landscape across the Indo-Pacific with dramatic consequences.

The Task of 2021: Stemming Beijing’s Aggression

While the rest of the world was combating COVID-19, Beijing’s relentless actions signaled its ultimate ambition to dominate the Indo-Pacific and rewrite the regional order inside Asia, and thereafter globally.

The geo-strategic and military maneuvers undertaken by China in the past six months of 2020 showcase Beijing’s endless pursuit of revision of the status quo. This applies to all Beijing’s existing territorial disputes, from the East China Sea to the South China Sea and the Himalayan borderlands. All of these regions have experienced a visible disturbance of the pre-existing status and efforts to shift the power balance.

This only serves as a crude reminder that 21st-century Asian political geography shall continue to be shaped, and reshaped, by Beijing’s cartographic subjectivity in the coming years, too, unless it is checkmated in a timely manner.

The alarmingly developing reality makes it more than imperative for the United States, under newly sworn-in President, Joe Biden, to ensure immediate steps that guarantee continuity of a democratic and just global balance of power that adheres to the international rule of law.

For the same reason, the free world that collectively values individual freedoms and liberties needs to counter Beijing’s professed ambitions for a China-dominated world order that could potentially yield undesirable consequences for nations which seek to uphold those values as foremost guarantees of their respective constitutions.

China’s unilateral and multifold territorial expansion by military force and intimidation, and political intervention via the Chinese Communist Party’s global agenda, cannot be countered substantively without the leadership provided by the United States.

Significantly, 2021 marks the centennial year of the Communist Party of China, which came into being in 1921. The year promises to be a crucial test for the political legitimacy of the Party, amid the plethora of internal crises facing Xi Jinping from within.

It will be essential for the Biden administration to tread very cautiously and think strategically on its “China” approach, if the incoming U.S. president is to lead America and its allies in countering the long-term challenges they increasingly face. The onus needs to be back on building and restoring a foreign policy agenda that leads with diplomacy, with a commitment to open markets, revitalizing Asian alliances with a willingness to defend and engage allies, thereby placing the U.S. at the forefront of negotiating with China.

Getting the U.S. back on the track of rulemaking, and bringing its democratic partners and allies on board, is the way forward in meeting up and managing an increasingly belligerent and assertive China that is intently resolved towards creating new economic and geopolitical realities that others are forced to accept.

The Biden administration is taking over the reins of the White House when the rising COVID-19 allegations against China are bringing about a repositioning of countries with values the United States shares.

There are significant geo-strategic challenges ahead. China’s initiative to urge Biden, through its state-run and controlled media, to replace the term “Indo-Pacific” with “Asia-Pacific” is the most visible among many, which are likely to cast a shadow on Asia’s overall foreign and security policy architecture following the U.S. presidential campaign.

Whether Beijing seeks to alter the mere nomenclature, or wants to forcibly inject a conceptual and policy-oriented change, its words should not be taken at face value.

That notwithstanding, the initial points in response to Beijing’s suggestion do not appear encouraging. Biden has chosen not to mention the “Quad” – four key nations committed to free and open seas in the Indo-Pacific, either before or after the election.

On December 9, introducing a key member of his national security team in Wilmington, Delaware, Biden announced his choice of General Lloyd Austin as the 28th U.S. Secretary of Defense. During the address, Biden expressed his commitment to strengthening shared security and “rebuilding and modernizing America’s alliances — from the ‘Asia-Pacific’ to Europe and around the world.”

While the overall defense and foreign-policy posture adopted in 2021 by leading Asian democracies shall be a key determining pillar, the strategic uncertainty vis-à-vis China and long-standing territorial disputes remain bitter realities. They also serve as the reminder that will push Asian democracies to possess capability-based forces to ensure their own survival, and to deter the numerous asymmetric challenges designed and employed by China across the Indo-Pacific.

Recall, the 1999 book, Chao Xian Zhan (Warfare Beyond Rules: Judgment of War and Methods of War in the Era of Globalization) co-authored by two Chinese military officers, Qiao Liang and Wang Xiangsui. The two fervently pressed upon China to research asymmetric strategies and exploit the “vulnerabilities of the advanced armed forces.”

The central premise of Warfare Beyond Rules is for China to become prepared to conduct “warfare beyond all boundaries and limitations.” While commenting on the bans on chemical, biological weapons, and landmines, the authors contend that powerful nations “use rules” to control others, for instance “by banning chemical and biological weapons.”

The essence drawn from the above arguments is that China, internally, appears to be opting for means of warfighting by disregarding agreements and codes of conduct developed over the past decades by the free world.

Washington, its partner nations, and allies need to remember that any short-term arrangement with China, be it politico-diplomatic, or economic, should not lose sight of how China envisages and plans its long-term security policy, especially when it comes to territorial expansion and consolidation of its influence, politically.

2021 requires a refocus toward a democratic, rules-based, inclusive world orderーone that respects sovereignty and territorial integrity of nations. It must ensure the rule of law, freedom of navigation, overflight, unimpeded lawful commerce, and peaceful resolution of disputes, with full respect for legal and diplomatic processes, in accordance with the universally recognized principles of international law (including the UNCLOS), without resorting to threat or use of force.

Including Environmental Challenges in Asia

Significantly, the New Year brings back a focus on the concerted action required to combat climate change. A global commitment is necessary to strengthen environmental partnerships in areas such as pollution controls, sustainable biodiversity management, chemical and waste management, and wastewater management.

Regionally, ASEAN unity and centrality will remain at the heart of the Indo-Pacific concept. Asia and Africa shall continue to be impacted by the development of connectivity via open, transparent infrastructure that is based on international standards, including transparent debt financing practices, thus contributing to the broader sustainable development of the region. Achievement of the UN-led Sustainable Development Goals initiative is possible, including a major focus on cooperation in the fields of sustainable and clean forms of energy, including nuclear and renewables.

It is an increasingly globalized world, and the security challenges and dependencies will remain transnational. This renders higher frequency of bilateral and multilateral naval exercises and expansion of maritime domain awareness in the Indo-Pacific even more desirable.

Liberal democracies that hold vital stakes in Asia and its future geopolitical and economic order should not let go of the solid foundations and convergences, and the capacity building they have built at the strategic level over the past several years, which pave the way for better integration of the Indo-Pacific, and its stakeholders.

The commonality of goals, such as strengthening multilateralism, shall be the identified key security facets of 2021.

Find other contributions of Dr. Chansoria on her author page.