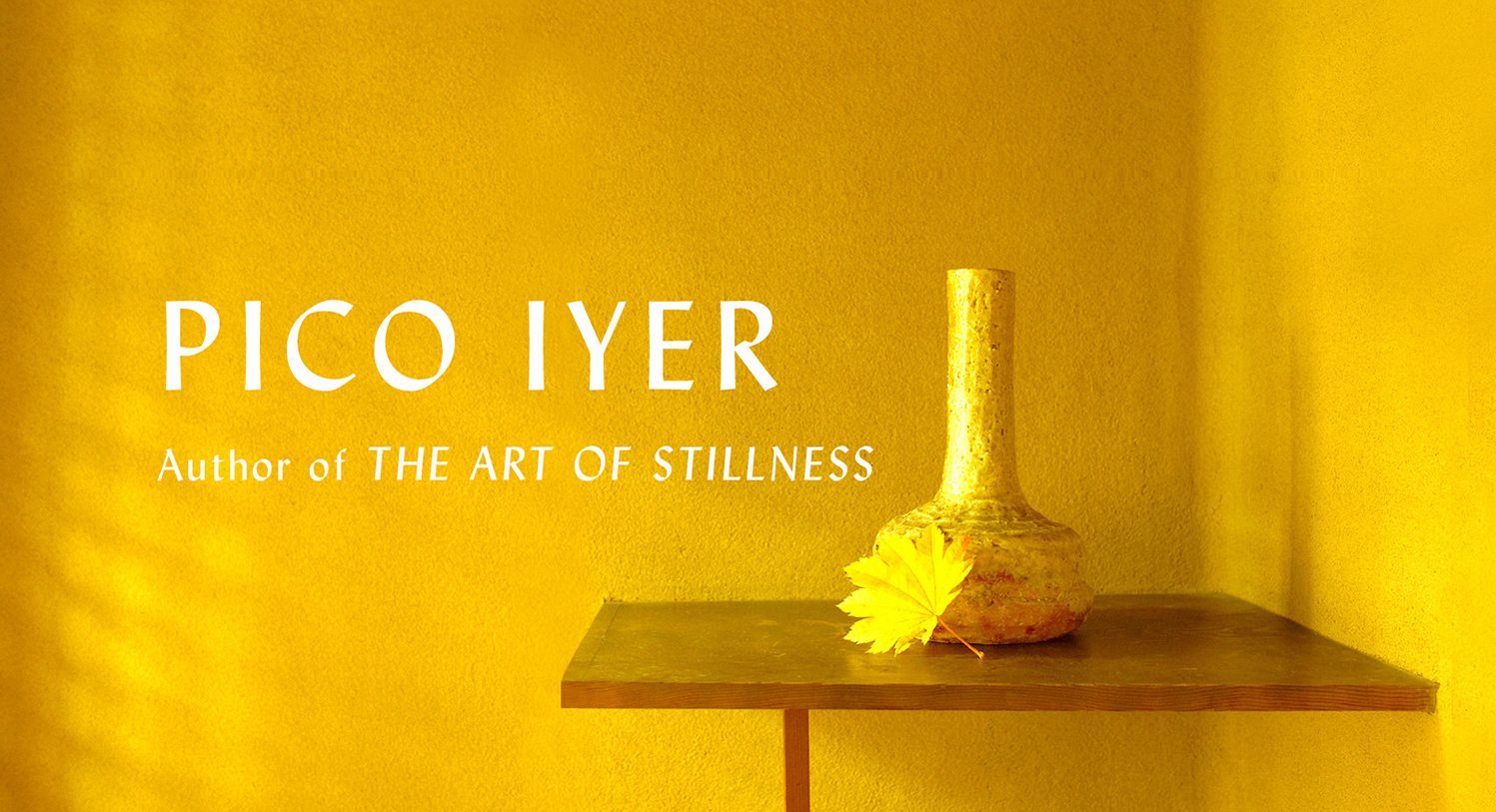 Pico Iyer is one of the most beloved and well-known travel writers in the world. Born in Oxford and educated at Eton, Oxford, and Harvard, Iyer left a career in Manhattan to become a full-time traveler and writer in the 1980s. He is the author of 15 books and thousands of essays for Time magazine, The New York Times, The Times Literary Supplement, Granta, and hundreds of other publications ranging every inhabited continent.

One of Iyer’s most popular books, The Lady and the Monk (Vintage, 1991), is about his first year in Japan, more than 30 years ago, around the old capital of Kyoto. Since 1992, Iyer has lived part of each year in a suburb of Nara, the richly historical ancient capital of Japan 20 miles from Kyoto.

Recently, Iyer released two new books, both about his time in Japan, but unlike each other in nearly every other way. Autumn Light (Knopf Doubleday, 2019) is a lyrical, poignant exploration of a typical neighborhood in Japan written from the perspective of someone who is part of a Japanese family but is also still an outsider. A Beginner’s Guide to Japan (Knopf Doubleday, 2019) is a collection of kōans, aphorisms, wisps of thought, and occasional short essays that distill half a lifetime of thinking about Japan — not quite Iyer’s home, for he is a traveler at heart and still stays for part of each year in a Benedictine monastery in California, but the place where he has spent many seasons and touched many lives.

In early December 2020, JAPAN Forward editor Jason Morgan had the chance to ask Pico Iyer about his new books, his old ones, and the life he lives both on and off the printed page.

Here in Part 1 of their conversation, Iyer discusses the religious and cultural backdrop to A Beginner’s Guide to Japan and Autumn Light. Excerpts follow.

The year 2021 has just begun. Before we move on to talk about your books and perspectives on Japan, would you care to recommend a favorite place to welcome the New Year?

The best place to experience New Year’s anywhere around Kyoto is surely Fushimi Inari Shrine, a magnetic and powerful place even on the quietest day. And as you walk along the little lane leading to the shrine of 10,000 tori, you may well come across a tasty coffee (and smoothie and frappe and tea) stand, run by my daughter, and rejoicing, improbably, in the name of “Pico.”

That directness and immediacy are two of the things I most admire about Japan, a sense of being unclouded by abstraction or needless cerebration!

Many, many of the people I know here, starting with my wife, seem at some level to have absorbed a great deal of Buddhism — in a feeling for impermanence, a way of defining themselves through something larger than themselves, a highly practical humanity.

I often feel that a large number of my mother’s neighbors in California know much more about the sutras and Buddha’s formal teachings than my neighbors in Nara do. But my neighbors in Nara are living those teachings instinctively, more than might first appear, if only because it’s in their blood and their grandmother’s stories, the verses they were made to recite in school.

The most profound passages of Autumn Light involved Mister Donut, McDonald’s, Starbucks — places where one would least expect to find what one is looking for.

I left New York City in 1986, when I was 29, to come to live in a temple on the backstreets of Kyoto. In my romantic youth, I drew a sharp distinction between what was within the temple walls and what was without.

Almost as soon as I arrived, I realized I could learn as much about the legacy of Buddhism by going to McDonald’s, where a young mother was teaching her four-year-old to think of others before himself, or by heading to a convenience store, where a dyed-blond boy at the cash register gave himself to my Kit-Kat as if it were a holy object, as I could amidst black-robed monks performing their morning chants.

After 33 years in Japan, I feel my job is to find the wonder and grace in the everyday — which is to say, my suburban Nara ping-pong club and Starbucks — and not just seek out what seemed exotic or new, as when I was a kid.

In Autumn Light you write, “Hearing myself, I wonder who I am.” Was it to avoid these moments that you decided to remain a tourist in Japan? Is it possible to be in two worlds at once?

I suspect that every foreigner in Japan inhabits at least two worlds at once. Many that I know are deeply involved in relationships with Japanese people, are part of communities, have integrated into neighborhoods, as I have. At the same time, they know, if they decline to kid themselves, that they’ll never be Japanese and will always be perceived as gaikokujin, or “outsider people.”

I choose to live in Japan as a tourist partly to keep myself honest. One of the things I appreciate about my adopted home is that the lines between insider and outsider are drawn very clearly here, and I will always be on the outside. My Japanese neighbors couldn’t be more kind or gracious to me, but I’m not sure they’d be delighted to have an unruly and unpredictable foreigner such as myself as a permanent part of the neighborhood.

And from my point of view, being a tourist here reminds me that I don’t know very much, can’t take anything for granted and can be delighted and surprised every time I take a brief walk to the post-office.

There is a scene in Autumn Light where someone reads you a passage from The Lady and the Monk which you do not recognize as your own. You conclude that, “Progress is a New World notion I’m not sure I believe in.” Is there some other way of knowing time apart from linear and cyclical? If so, do you find such a third way in Japan? Is there a non-progressive progression here?

When I describe not recognizing lines that I wrote when first I arrived here, 30 years before, I think I’m suggesting that life never moves in a straight line, which is part of what makes it so gloriously unpredictable.

Here in Japan we enjoy a “second spring” often in November, much as people in the West enjoy “Indian summer” in October. My 82-year-old friends in the ping-pong club will often defeat the vigorous and confident 18-year-olds who occasionally show up.

Autumn has strengths that spring might envy, in other words. Sometimes (as in the case of my writing) we are wiser when we’re in our twenties than when we enter our sixties. And sometimes, as in the ping-pong club, we can be healthier in old age than we were as kids.

I’ve never been convinced that humanity evolves in the same way as technology does, or that we are any wiser now (or worse) than in our grandparents’ day. So, I very much incline to the Old World way of seeing things, in which things keep coming round, and we take two steps backwards and then three steps forwards and then one backwards, rather than the young person’s assumption of the New World that we move from strength to strength and invariably know more and do better as we move from decade to decade.

In Autumn Light you record a short dialogue between yourself and Hiroko: “‘I hope he listens.’ ‘I hope, too.’” The shift here from the particular to the general, from hoping for and just hoping as hoping, connected with the themes of the book, sincerity, frankness, and also leaving most things unsaid.

I love this perception — and I do sense at times that my Japanese friends have a great gift for screening out the bad and accentuating the positive, in public. Japan is very good at putting a bright and cheerful face on things even if deep down it’s much closer to something melancholy.

I’ve always felt that cherry blossoms are the pretty, bright — and hopeful — face that Japan likes to present to the world (and perhaps to itself), but at its heart is something much closer to the mix of radiance and wistfulness we see in the rusting maple leaf.

But the gambatte (“Keep trying!”) spirit can be invigorating here, the sense that, if you try hard, you can make a small difference. When I moved from the young America of endless summer to autumnal Japan, a large part of me felt I was moving from a society founded on the “pursuit of happiness” to one instinctively formed around the reality of suffering, the First Noble Truth of Buddhism.