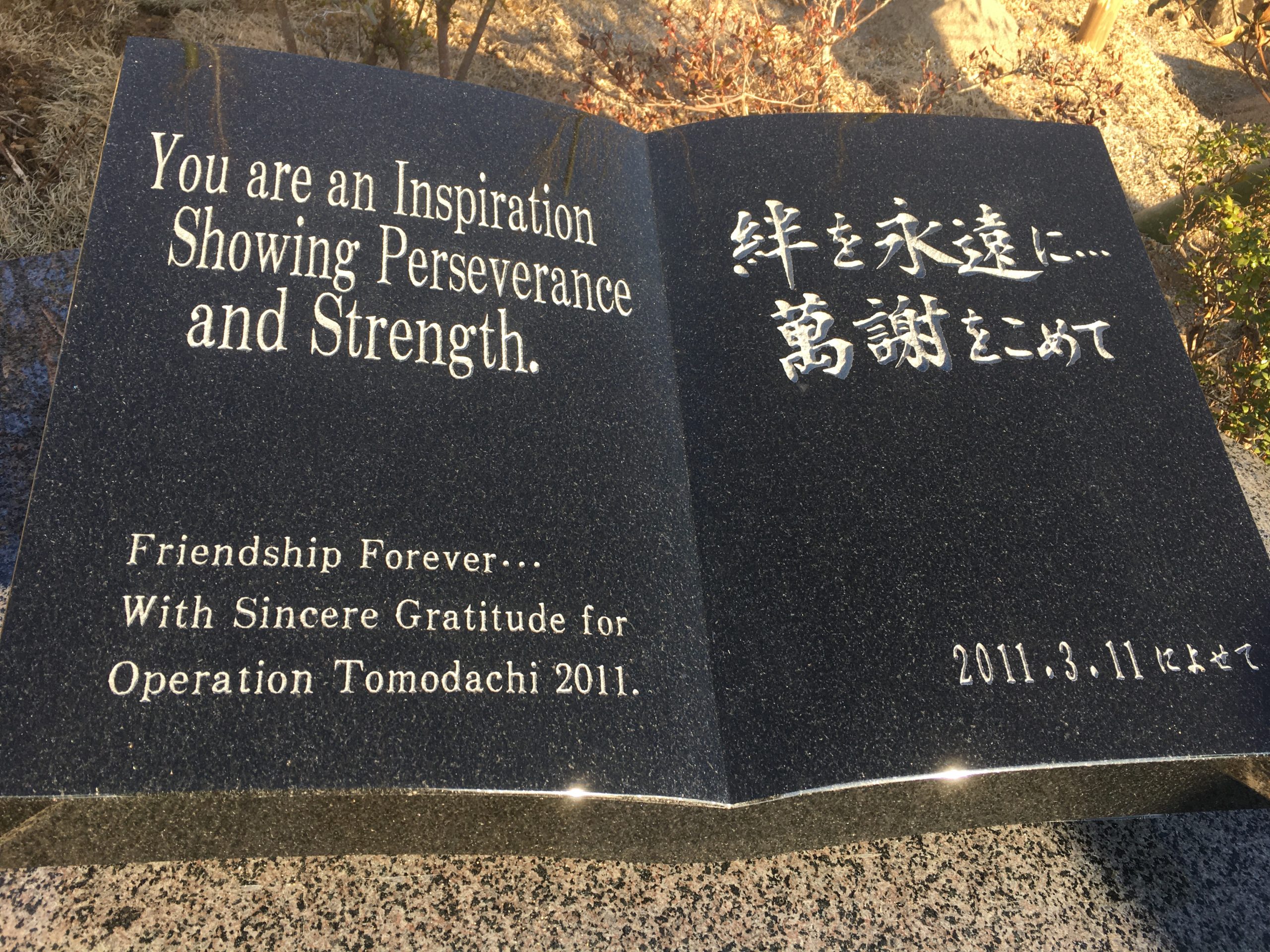 The town of Oshima's way of honoring the 10th anniversary of the Great North East Japan Earthquake and tsunami was to thank those who helped them recover and rebuild. Credit: Robert D. Eldridge.

This article is part of a series of articles marking the 10th anniversary of the Great East Japan Earthquake. What happened on that fateful March 11, 2011? What has happened since then? What does the future hold? Here we share the thoughts of people from many walks of life about this unforgettable tragedy.

Earthquakes are scary, and tsunami are outright terrifying.

Imagine, then, being a resident of an island of more than 3,000 people located at the entrance of a bay taking the full brunt of an oncoming tsunami. And not only that, but having that tsunami divide the island in two, and repeatedly being bashed by the forward and retreating action of multiple tsunami afterwards.

This was the fate of Oshima in Kesennuma City, Miyagi Prefecture, on that tragic afternoon of March 11, 2011. Indeed, the island has long been vulnerable to such natural disasters in its history.


The first recorded one dates from May 869, when approximately 1,000 people died. Ōshima was reportedly divided into three parts at that time by the tsunami that struck. The next known event was in 1585, but the number of deaths is uncertain. Less than thirty years later, a tsunami in 1611 killed approximately 500 people from Oshima. That one, four hundred years ago, appears to be the last major tsunami that caused a large loss of life.

Perhaps as a result of sharing and passing down lessons learned—namely, “if you feel an earthquake, immediately get to high ground and do not go back for anything or delay for any reason”—the number of deaths on Oshima was surprisingly low for the violence the island experienced a decade ago.

The lessons were in part communicated through several historic monuments and memorials around the island, telling of past experiences or warning not to build below a certain elevation. These warnings were for the most part honored, and as a result “only” three dozen lives were lost in the 2011 Earthquake and tsunami on Oshima.

On the 10th anniversary of the disaster this week, a new monument was dedicated on the island. This time, it was a message of hope and friendship.

Islanders organized the Hanamizuki (Dogwood) Project to build a monument thanking the United States, and especially, the U.S. Marine Corps, for its support after the Great East Japan Earthquake.

The Dogwood is a tree native to North America, and not only represents the United States, but is symbolic of the efforts by that country in 2012 to donate Dogwood trees to Japan in response to the latter’s donation of 3,000 cherry trees (sakura) to America in 1912.

Similarly, the effort by the islanders to build and dedicate a monument was self-described as a “Operation Arigato (thank you),” in response to the U.S. military’s efforts after the March 11 disaster known as “Operation Tomodachi (Friendship).”

Appropriately, the epithet on the moment stated, “Friendship Forever With Sincere Gratitude for Operation Tomodachi 2011.”

These were not just words. As the former deputy assistant chief of staff for government and external affairs, Marine Corps Installations Pacific, and the political advisor to the forward command element in Sendai during Operation Tomodachi, no sooner were the immediate relief efforts for the area ended then the next stage of support was begun.

This was one of the lessons driven home to me after personally experiencing the Great Hanshin Awaji Earthquake (Kobe, Japan), in which many people died following the disaster due to mental and physical illnesses, including suicide, known as saigai kanrenshi (disaster-related deaths). Approximately 15% of total deaths are attributed to kanrenshi.

On March 15, 2011, while still in Sendai, I explained this lesson to my boss, a Marine general, and asked for his support in developing a long-range program of support to the area and was given his blessing. That area eventually became Oshima, which the 31st Marine Expeditionary Unit based out of Okinawa, had given unprecedented support.


The Marines and Sailors of the U.S.S. Essex developed a close relationship with the islanders during the cleanup operations on the island, in which valuable services were provided and/or restored. The send-off of the 31st MEU given by the islanders received national attention.

Two months later we were back discussing with island leaders and educators our hope to bring the children of Oshima to Okinawa to give them some rest and relaxation, and a chance to reunite with some of these Marines, Sailors, and family members. This became the first of several homestay programs on base for the children of Oshima, with a total of 50 children and ten chaperones attending over the next few years.

During these programs, the adults would visit base schools and off-base sites to discuss with educators and disaster planners the importance of disaster preparedness and to discuss with them proper evacuation procedures. I was so proud that we could be a bridge between schools and communities of one part of Japan with another.

There were also many reciprocal visits to the island. In January 2012, we conducted an emotional lessons-learned session on the island giving everyone—children, parents, leaders, volunteers, the mayor, etc,ーthe chance to reunite once again and share together. Later that summer, the III Marine Expeditionary Force Band was dispatched at the mayor’s request to participate in the 2012 summer Kesennuma Port Festival, which had been cancelled in 2011 due to the disaster.

Facilitating this interaction was another memorable moment, as was watching the parade-watchers rise at attention when the Marine band marched by proudly and happily, performing for the tens of thousands gathered. The energy the band brought with them infected everyone. People were clapping, dancing, and celebrating. While Kesennuma was still devastated, with debris piled high at the port and the ferry terminal building, roads, and buildings damaged beyond repair, the city was clearly coming back to life.

The bonds between Oshima and the Marines deepened further when the III MEF Band traveled to Oshima in March 2013, performing “Amazing Grace” and other music for the residents on the island in a memorial concert. At that concert was the same Marine general, then-Major General Peter J. Talleri, who had blessed my proposal exactly two years before, for the continuing relationship with the island. Earlier in the day, he attended the city’s memorial ceremony to pay his respects. The following year, Lt. Gen. John Wissler, another supporter of the relationship, attended the ceremony on behalf of all Marines in Japan.


There have been dozens of more interactions, both official and private, over the years. Although I left my position with the Marine Corps in 2015, I have continued to be closely involved with the island, attending the memorial ceremony on the 5th anniversary in 2016 with my family (who served as a homestay host family in 2013), attending summer festivals, and publishing a book about the island and its experience with the disaster (in 2017), attending the bridge opening ceremony (2019), and the monument dedication (2021).

The development of the relationship paralleled the changes that have come to the island since the disaster. As part of the rebuilding, a long-desired bridge connecting the island to the mainland was finally built and opened in 2019. Islanders had wanted a bridge since the 1950s, but the 2011 disaster finally convinced city, prefectural, and national government officials to move forward with the project. It was a big project—connecting roads and tunnels on the island and the peninsula needed to be built—but the dangers of isolation in a disaster proved the need.

Every time I would visit the island (15 times in all to date), I would see the changes that had come. Fortunately, the changes were not only physical, but also emotional—more smiles, more joy, and more hope for the future.

The close relationship, or kizuna, that developed between the Marine Corps and the islanders signified the feelings behind the March 7 dedication of the monument. It was particularly special because my former colleagues, Lieutenant Colonel Paul Bartok, who was on the 31st MEU and served in Sendai, and Major Caleb Eames, who was on the 31st MEU and assisted Oshima, were both able to attend. Eames read aloud remarks prepared by the commanding officer of the 31st MEU at the time, Colonel (retired) Andrew MacMannis, who watched the live-streamed ceremonies with his wife from their home in the United States. The mutual respect and gratitude between these Marines and islanders are clear and sincere.

The very best of the U.S.-Japan relationship was on display that day, as it was during Operation Tomodachi itself.

Dr. Eldridge is the author of Operation Tomodachi (in Japanese, Shueisha, 2017) and other works about disaster response and U.S.-Japan relations. He served as the political advisor to the Forward Command Element at Camp Sendai during Operation Tomodachi and was the Deputy Assistant Chief of Staff, Government and External Affairs, Marine Corps Installations Pacific, in Okinawa from 2009-2015.