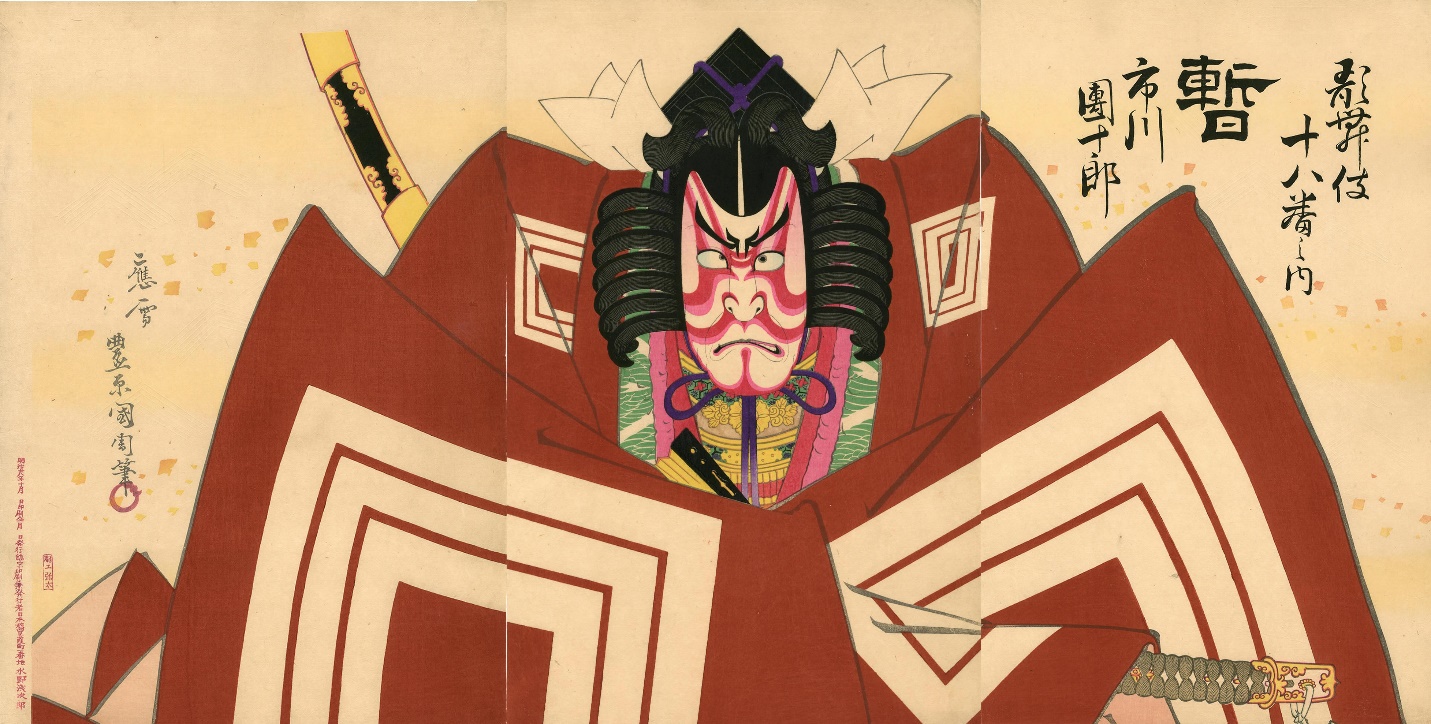 December 2015 was a special anniversary for me. It marked exactly 30 years since I began writing English translations and explanations for the earphone guide service at the Kabukiza and the National Theatre in Tokyo.

The work has afforded me the privilege of attending countless performances, and has given me access to rehearsals as well as to areas backstage, including the occasional visit to an actor’s dressing room. Above all, it has allowed me to get my hands on the working scripts.

Learning to read these has been a challenging and sometimes painful process that is still far from complete, but it has been one of the most fulfilling that I have experienced. At the Kabukiza, the English earphone guide has now been replaced by English subtitles, allowing me to get even closer to the written word.

But having said that, it was not the texts which first drew my attention. My personal association with the kabuki theater goes back a long way. As a seven-year-old, I was taken on a holiday to Japan by my parents, and during our brief stay in Tokyo we attended a performance at the Kabukiza. This is the perfect age for children to be introduced to this magnificent art form. A love for the visual and performing arts is something you’re born with, and at so young an age one is free from the preconceptions that so often prevent adults from enjoying kabuki.

Time and again in Japan I have heard the excuse that kabuki is too difficult to understand, that the language is antique and the conventions too esoteric. Japanese adults tend to think of kabuki as a subject in school, where perhaps they were forced to study texts as unwilling teenagers. That trauma seems to have remained with many for life. The same happens in the West in our teaching of Shakespeare. It’s such a shame. But for younger children with aptitude, such things do not bother them. Those born with an innate appreciation will have their imaginations set on fire.

The same can happen to foreigners with little or no experience of kabuki. It happened to my parents. The second time I saw kabuki I was 13, when again my parents took me to Tokyo on a holiday. Whereas previously we had seen the lion dance Kagami Jishi (“The Mirror Lion”), this time it was Sumidagawa (“The Sumida River”), starring Nakamura Utaemon VI as a mother gone mad with grief at the loss of her son. My own mother was sitting next to me and I couldn’t help noticing that, during the climax, there were tears in her eyes. 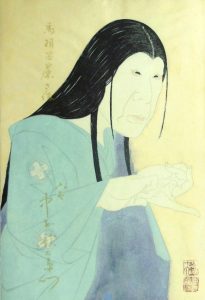 On stage, the mad woman had just been told about a boy’s burial mound. Realizing that the one buried there was none other than her own son, she was horrified and broke down. Deeply moved by her plight, a ferryman offered to take her to the grave, where she could pray for the deceased. Once there, she saw a vision of her son and heard his voice. In her distress, the woman lost her senses again, and as she struggled with the ferryman her vision seemed to appear, and then disappear from sight. In fact, all she had seen was the slender willow above the grave, and all she had heard were the calls of the “capital birds” as they darted to and fro above the river.

There was nothing difficult to comprehend here. Despite not understanding a word of the lyrics being sung, with just a little help from program notes, the story was clear. But more than that, the impact of Utaemon’s performance and the beauty of kabuki’s unique presentation left a deep and lasting impression.

The art of the kabuki theater has been at the forefront of Japanese popular culture for over 400 years. Still very much alive and well, it now encompasses a huge variety of plays and dances typical of the eras and regions in which they were created. Though the main body of the repertoire comes from the 18th and 19th centuries, some works still performed may date back to the late 17th century, while others can be brand new.

Acting styles also vary, and just as there are older, highly-stylized works performed with onstage musical accompaniment, so there are more recent dramas presented in a realistic way with either recorded music, or no music at all. Some works may be pure dance, others pure dialogue, or, as is commonly the case, a combination of the two.

In its essence, though, ka-bu-ki, (歌舞伎)—written with the three characters that mean “song,” “dance,” and “acting skill”—is an art form combining very different disciplines that would, in most other cases, be performed separately.

Kabuki’s roots lie in musical theater. This ranges from onstage accompaniment by singers, and players of drums, flutes and, most importantly, the three-stringed shamisen, to subtle offstage background music. Kabuki actors of rank receive strict training in one or more forms of music from early youth. Even if they do not need to sing or play instruments on stage, this background is considered essential to a proper understanding of the art. In the case of dances, of course, music, and especially song, is of vital importance. 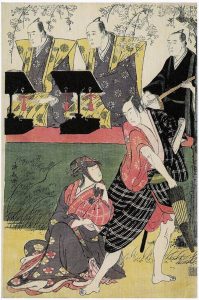 Artist: Torii Kiyonaga. The actors Matsumoto Kōshirō IV as Kameya Chūbē and Mimasu Tokujirō I as Umegawa in Keisei koi Bikyaku, performed in the 3rd month, 1784. – The narrators and shamisen players of the Tomimoto School appear with them on stage.

Often performed in gorgeous costumes against backdrops of great beauty, dances can be the most visually spectacular items on a kabuki program. Usually before the age of 10, and sometimes from as early as three, Kabuki actors study traditional Japanese dance called Nihon Buyō, and dances make up around one-third of the existing repertoire.

Kabuki, in fact, began as dance. The earliest records show that troupes of women entertainers in and around Kyoto put on revue-like shows featuring the performers dancing in a row. One particular troupe was led by a woman called Okuni, and it is she who is said to have founded kabuki in 1603. But over the years, kabuki and kabuki dance evolved away from these primitive entertainments into a highly complex and sophisticated art. 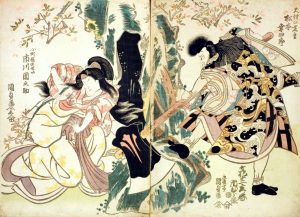 Artist: Utagawa Kunisada I. Ichikawa Dannosuke III (left) as the spirit of the Komachi cherry tree and Matsumoto Kōshirō V (right) as Ōtomo no Kuronushi in a version of the dance Seki no to from the play Gozonji Edo-e fūryū, performed in the 2nd month, 1815.

A characteristic of most dances we see today is their specific dramatic content. Many were created as parts of longer plays, and in some way they reflect the stories of these plays in their subject matter. Even when there is no particular story to tell, the dancer will still be “in character,” portraying a wide variety of people from the refined princess to the humble street peddler.

While the beauty of pure form and melody is also important, the existence of song lyrics ensures that there is also something for the dancer to enact. For this reason, there is a very close connection between dance and the literal meaning of the texts, and kabuki dance is never divorced from acting.

Two-thirds of the repertoire are made up not of dances but of plays, and every kabuki actor is expected to perform both. Since the official banning of women from the stage in 1629, all roles in kabuki have been played by men, and perhaps the most remarkable feature for the first-time spectator is the onnagata—the male actor who specializes in female roles.

In youth, all kabuki actors have to learn the basic movement patterns, posture, and speech typical of male and female characters. But while a few continue to perform both as mature actors, most become specialists in one or other gender. In contrast to the onnagata, an actor who specializes in male roles is known as a tachiyaku. Within each gender category there are a number of standard role types, each with its own distinct acting conventions. For onnagata, important role types include the great courtesan of the red-light district, the loyal samurai wife, or the refined court lady. For tachiyaku, important types may be the heroic warrior, the sinister villain, or the gentle and romantic lover.

Broadly speaking, traditional kabuki plays fall into two categories: jidaimono (history plays) and sewamono (domestic plays), although each of these categories includes several subdivisions, and a long play will often include acts in both the jidaimono and sewamono styles.

Jidaimono are set in an era predating the Edo Period (1603-1868), and they take as their main characters the members of the samurai aristocracy. Jidaimono history plays are often visually appealing, with magnificent costumes, make-up, and colorful sets. 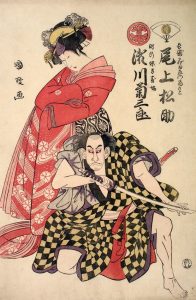 The acting techniques tend to be bold and stylized, featuring grand posturing with many stop-motion poses called mie. These mie poses are struck at moments of heightened tension and, like a picture or a sculpture, they present to the audience in physical form a powerful crystallization of emotion.

Another reason for this stylization in acting is that many of the most famous jidaimono were created as dramas for the puppet theater (known today as bunraku), and they are performed with the same style of musical accompaniment that is heard in the puppet theater.

The music is called takemoto, and it is usually performed by a shamisen player, and a narrator who tells the story and the circumstances, and describes the actions and emotions of the characters. In Kabuki, the role of the narrator is somewhat diminished, but even so, the subtle interaction between actors and musicians is key to the appreciation of classical jidaimono.

Sewamono, on the other hand, portrays in relatively realistic fashion the life of the ordinary people of the Edo Period, although plays in this category often show some stylization in presentation, especially at climactic moments. 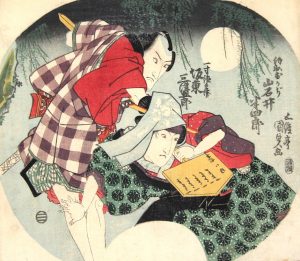 Artist: Utagawa Kunisada I. Bandō Mitsugorō III as Issun Tokubei fighting with Iwai Hanshirō V as Tsurifune Okaji; they grapple with a signboard under a willow tree beneath the full moon. Related to the sewamono play Natsumatsuri Naniwa kagami. Dated 1826.

Paul Griffith was formerly an associate professor at Saitama University (Education Faculty). He read for a Phd degree at Oxford University in the field of Japanese theatre history, and has been a translator and narrator for the Earphone Guide Co. Ltd. at the Kabukiza and the Tokyo National Theatre. He is also a translator and narrator for many Kabuki DVDs, and has written subtitles for Cinema Kabuki. Previously, he worked in the Japanese department of the Victoria & Albert Museum in London, and continues to work as a volunteer for the British Museum’s online database of Kabuki actor prints.