As United States President Donald Trump prepares for his first trip to China in November, senior US officials actively consult with Chinese counterparts and reportedly review important aspects of US China policy. Taiwan, which was mooted early in the administration without follow-through, is long overdue for a policy review; Taiwan should figure prominently in the China policy re-evaluation.

Thus far, US actions on Taiwan have been episodic and erratic: in December Trump accepted a phone call from Taiwan’s president and questioned the US “one-China” policy. He then improved ties with China, and told the media in April that he would consult with Beijing before talking to Taiwan’s leader. This was followed in June by US approval of a large arms sales package to Taiwan and unusually strong statements by senior US leaders reaffirming US defense commitments to Taiwan.

As they negotiate with Chinese leaders who are ever-watchful for opportunities to weaken US ties with Taiwan, the President and senior administration leaders need a comprehensive understanding of important US security, economic, and political interests in the so-called Taiwan issue.

The salience of these interests increases with China’s rise to great power status in Asia, accompanied by bold and assertive Chinese leader Xi Jinping. Xi is determined to have his way in pursuing the so-called “China Dream,” which means a rejuvenated, unified, and powerful China advancing at the expense of its neighbors and the United States. Those neighbors are repeatedly intimidated and coerced by Chinese security forces, economic pressures, and diplomatic threats to defer to China’s growing demands for regional control and preeminence.

A key barometer of regional perception of US strength or weakness as China rises depends on US resolve in handling the Taiwan issue. On the one hand, Asia-Pacific countries disapprove of US actions that without good cause create serious tensions with China. On the other hand, they monitor carefully US handling of relations with its longstanding Taiwan partner for indications of how Washington will support them in facing growing Chinese power and demands.

The Barack Obama government was less than effective in the face of Xi’s repeated challenges and expansion. By 2104, Obama came to see that Xi’s assertiveness in the Asia-Pacific and other areas of US-China relations warranted a change from his usual reticence in publicly criticizing Chinese behavior. He focused on Chinese “bullying” neighbors with claims in the South China Sea and the East China Sea through coercive actions of security forces and massive island building in the South China Sea.

His signature “rebalance” policy of greater US security, economic, and diplomatic regional engagement was broadly welcomed except for China, but proved less than resolute in dealing with Beijing’s expansion. Overall, the US is seen in decline. Regional governments are hedging their bets as they consider a future increasingly under the sway of Chinese leaders demanding deference on an ever-broader array of sensitive issues.

Taiwan played little role in the rebalance. Taiwan was subjected for two decades to the type of Chinese bullying of neighbors that Obama and his senior officials condemned. Yet, they never mentioned Taiwan in this context. US criticism of China grew, but was never allowed to spill over to impact Taiwan policy, which continued carefully to avoid US actions that might upset China. In the view of critics, US reticence in the face of Chinese bullying of Taiwan signaled a broader US reluctance to confront such Chinese behavior elsewhere. This has resulted notably in the steadily advancing of Chinese control in the South China Sea.

If Trump and his senior leaders choose to re-examine Taiwan in US policy, it seems a review is warranted, going back further than the Obama government’s carefully controlled efforts to avoid controversy with China over Taiwan. US presidents since Nixon more often than not have followed a path of accommodating China on sensitive aspects of the Taiwan issue rather than risk serious controversy with Beijing. 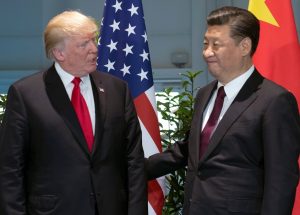 Thus, Obama’s accommodating policy followed the approach developed in the middle years of the George W. Bush administration (2001-2009) to curb support for Taiwan and its pro-independence President Chen Shui-bian (2000-2008), increasingly bent on provoking China. Chen’s disruptive approach was eventually repudiated by Taiwan voters, giving strong support to new accommodation of China urged by President Ma Ying-jeou (2008-2016). Bush’s discreet handling of the Taiwan issue to avoid upset for China did not change and was followed by the incoming Obama government.

Yet, two earlier re-evaluations of US China policy have seen the wisdom of more robust US support for Taiwan and seem worthy of consideration in the current policy review. A decade of US cutting back ties with Taiwan for the sake of improved relations with China resulted in serious blowback from Congress and a major re-evaluation of China policy in 1982-1983 under the leadership of Secretary of State George Shultz. Shultz was backed by officials responsible for Asian affairs in the State and Defense departments and the National Security Council led by Paul Wolfowitz, Richard Armitage, and Gaston Sigur.

The result was a firmer US stance on Taiwan and other issues in the face of what had been growing Chinese demands, with US officials prepared to allow relations to deteriorate as threatened by China if its demands weren’t met. The Chinese were compelled to recalibrate and chose to solidify relations in welcoming President Ronald Reagan to China in 1984. They notably ignored what many in the United States saw as an egregious violation of agreements with China limiting US arms sales to Taiwan in a successful US scheme to sell components and kits and provide the manufacturing expertise to result in Taiwan’s development of 150 new jet fighters.

A second re-evaluation came at the start of the George W. Bush administration. The incoming government was concerned that China was increasing intimidation of Taiwan and the Clinton administration was not strong in response. The Bush government, containing several veterans of the re-evaluation of China policy under George Shultz, endeavored to strengthen US defenses and relations with allies and partners. This is to create a more favorable balance of power that would dissuade Chinese pressures.

Unlike the rebalance policy of the Barack Obama, the Bush rebalance policy placed Taiwan front and center in the US approach, with large arms sales offers and the president making the extraordinary public declaration that the United States would “do whatever it takes” to defend Taiwan if attacked by China. In response to US firmness, China chose to reassure the US of its peaceful intentions.

In sum, the US appears better off if Trump administration decisions impacting Taiwan are carried out on the basis of a thorough examination of the broad array of US priorities at stake in relations with Taiwan. Following inertia of recent past administrations’ policy, swinging from one side to the other, or negotiating deals in accord with Chinese leaders’ intent on weakening Taiwan short-change those interests.