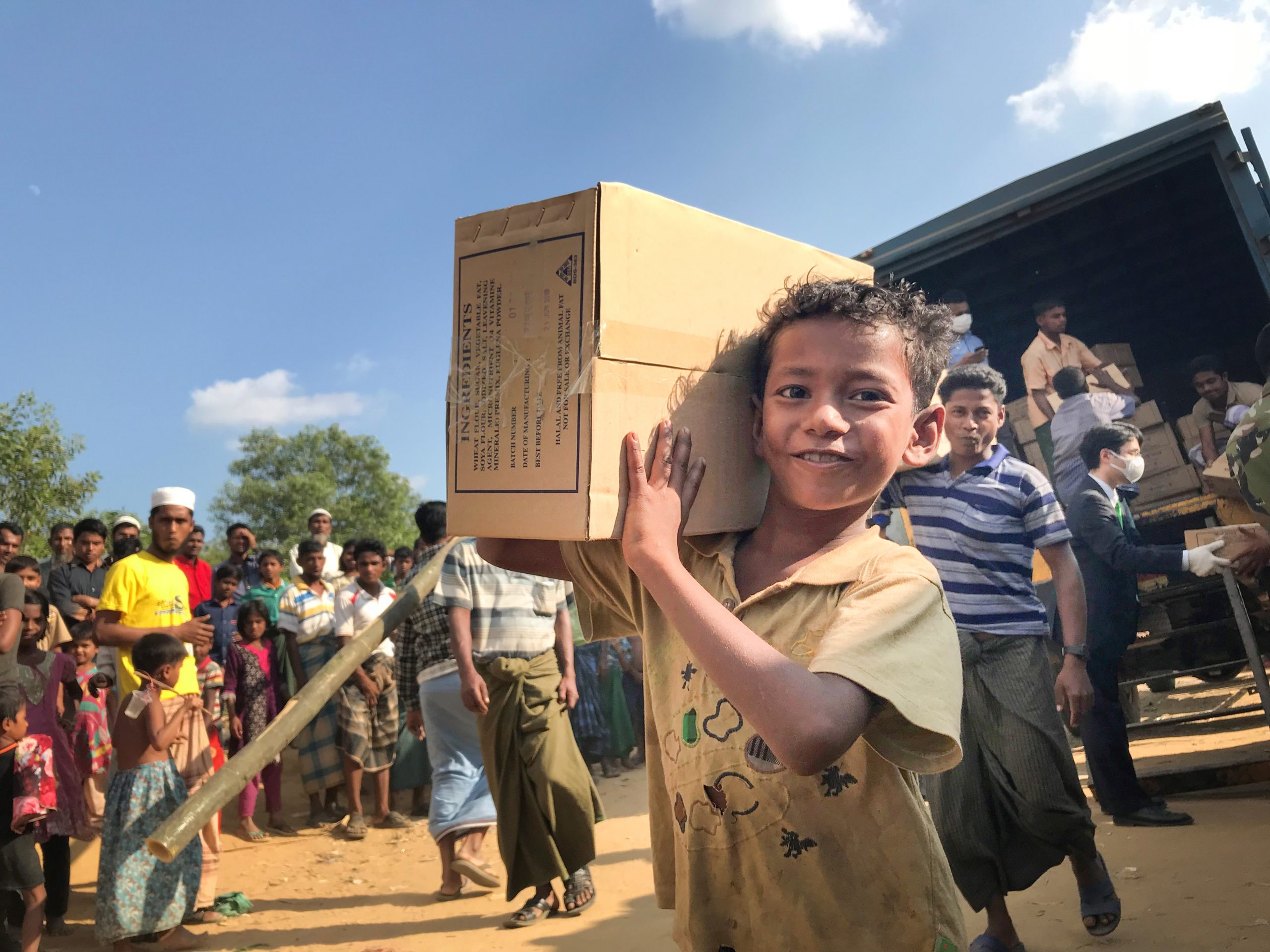 Children carrying Euglena cookies in a refugee camp in Bangladesh (courtesy of Euglena).

“We couldn’t abandon the Rohingya refugee children in distress, especially at a time when the novel coronavirus was spreading,” said Euglena President IZUMO Mitsuru, explaining his thoughts on the company’s project in Bangladesh.

Euglena, a biotechnology company that uses a type of green algae to produce food and fuel with low environmental impact, is the winner of the 2021 SDGs Chief’s Award given by the Prime Minister, the highest accolade of the Japan SDGs Award. In 2021 the biotech company took the significant step of changing its business purpose in its articles of incorporation, which is equivalent to a company’s constitution, to “the realization of a sustainable society,” reflecting the 17 SDGs.

The Japanese government’s SDGs Promotion Headquarters, headed by the Prime Minister, established the Japan SDGs Award to recognize and encourage initiatives like those of Euglena that serve as exemplary models for the realization of the SDGs.

Impressed with Euglena’s award-winning projects and innovation, groundbreaking even by international standards, JAPAN Forward sought to learn more about this Japan SDGs Award winner through an interview with company president IZUMO Mitsuru.

The Refugee Camp that Suddenly Appeared in Bangladesh

In the summer of 2017, the Rohingya people, a Muslim minority in Myanmar, crossed the border into Bangladesh to escape the military crackdown in their country. The number of refugees exceeded 800,000.

Euglena had been working since 2014 to improve the health of the poorest children in Bangladesh by donating cookies containing nutritious euglena algae. Mr. Izumo learned of the plight of the Rohingya refugees, who lacked adequate food, clothing, and blankets, and set out to provide support.

The first mission was to deliver 200,000 cookies to the refugee camp, which was no easy feat. Euglena needed to secure workers for distribution and persuade a local factory to produce the euglena cookies. This is where student volunteers from the University of Dhaka reached out to help.

At the end of that year, Mr. Izumo himself went to the refugee camp with the student volunteers. He said he would never forget the scene before him that day.

The forest had been cleared by the refugees, and hastily constructed houses with makeshift roofs made of plastic bags were spread out over the area.

Even though there were small children, the camp was very quiet. The children’s growth was stunted and they lacked even the energy to cry because their mothers were too malnourished.

The camp was under the control of the military, which brought additional challenges to distribution. Mr. Izumo stayed up all night with the student volunteers to distribute the cookies.

“For the first time in my life, I couldn’t lift my arms anymore,” he recalled.

The Significance of Persisting Through the Pandemic

The spread of the novel coronavirus was an unprecedented event that led to a lockdown in Bangladesh and the temporary closure of the local cookie factory. Members of international aid organizations and NGOs from around the world, including Japan, were forced to return home. Thoughts of giving up crossed the Euglena president’s mind.

However, Mr. Izumo felt Euglena needed to commit to not abandoning the people in Bangladesh. He refused to put out the fire of hope.

He resolved to show his determination as a Japanese national – a citizen of one of the most developed countries in Asia.

Previously, the cookies had been hand-delivered directly to the children to prevent diversion, but this became impossible due to the closure of schools in March 2020. In response, Mr. Izumo decided to distribute two weeks’ worth of cookies at a time.

The factory also had limited operating hours, so Euglena increased the stock by preparing a larger warehouse and producing the cookies whenever it could.

Euglena had been distributing 10,000 cookies at a time pre-pandemic. That number fell to almost zero at one point, but Mr. Izumo pressed ahead, increasing the number of cookies incrementally by the hundreds.

Mr. Izumo recalled, “Once the number of cookies had dropped to zero, we would have lost our logistics and delivery workers, and it would have become impossible to continue as we had before.”

In September 2021, the lockdown was lifted, and the cookies could be handed directly to the children again.

He decided to apply for the Japan SDGs Award to mark how they managed to overcome the worst of the COVID-19 pandemic using their ingenuity and determination to continue providing support.

“It was very significant that our SDGs efforts were recognized after the COVID-19 lockdown,” Mr. Izumo said, expressing his joy at the recognition. He believes it will be an opportunity to raise global awareness of the situation in Bangladesh.

With less than 10 years until 2030, the target year for the achievement of the SDGs, Mr. Izumo said:

The Millennials and Gen Z, who were born after 1980, are digital natives and social media natives who have been making full use of the Internet and social media for as long as they can remember. After 2025, when half of the working-age population will be made up of such people, who believe that the purpose of life is to solve social problems, the world will change drastically and the SDGs will be achieved.

According to Mr. Izumo, choosing eco-friendly products will become the norm for consumers of the future, rather than prioritizing low prices.

Very soon businesses will find that, to succeed, they will need to consider the future of the Earth, and not just their own profits, to attract human resources. The day is near when the “sustainability-first” approach will become the global norm.

The NPO eboard secures educational opportunities for children with learning difficulties by providing subtitles for video lessons based on easy Japanese.

Social Welfare Organization Saiseikai Imperial Gift Foundation provides support to those in need by going beyond the existing framework of medical care and welfare.

Winners of the Deputy-chief’s Award (by the Foreign Minister)

HAKKI AFRICA Inc provides microfinance services for cab drivers in Kenya so that they can possess their own cars and become independent.

OUI Inc. has contributed significantly to universal health coverage (UHC) by developing a medical device that can be connected to smartphones, making it possible to get an eye examination at a reasonable price wherever you are.

Winners of the Special Awards

SUCRECUBE Japon Inc. contributes to the improvement of healthcare and education by building digital infrastructure in areas of Senegal without electricity or access to telecommunication.

The Yumetomo Project in Kadoma executive committee innovates and implements activities for people with dementia so that they can flourish and become movers influencing community development.

The Otsuchi Jibie Social Project has formulated the “Otsuchi Jibie Cycle” in response to problems surrounding Japanese deer, which are considered vermin and exterminated. The project addresses the capturing, processing, and distribution of Japanese deer, as well as their role in tourism, and educates the next generation about Japanese deer.