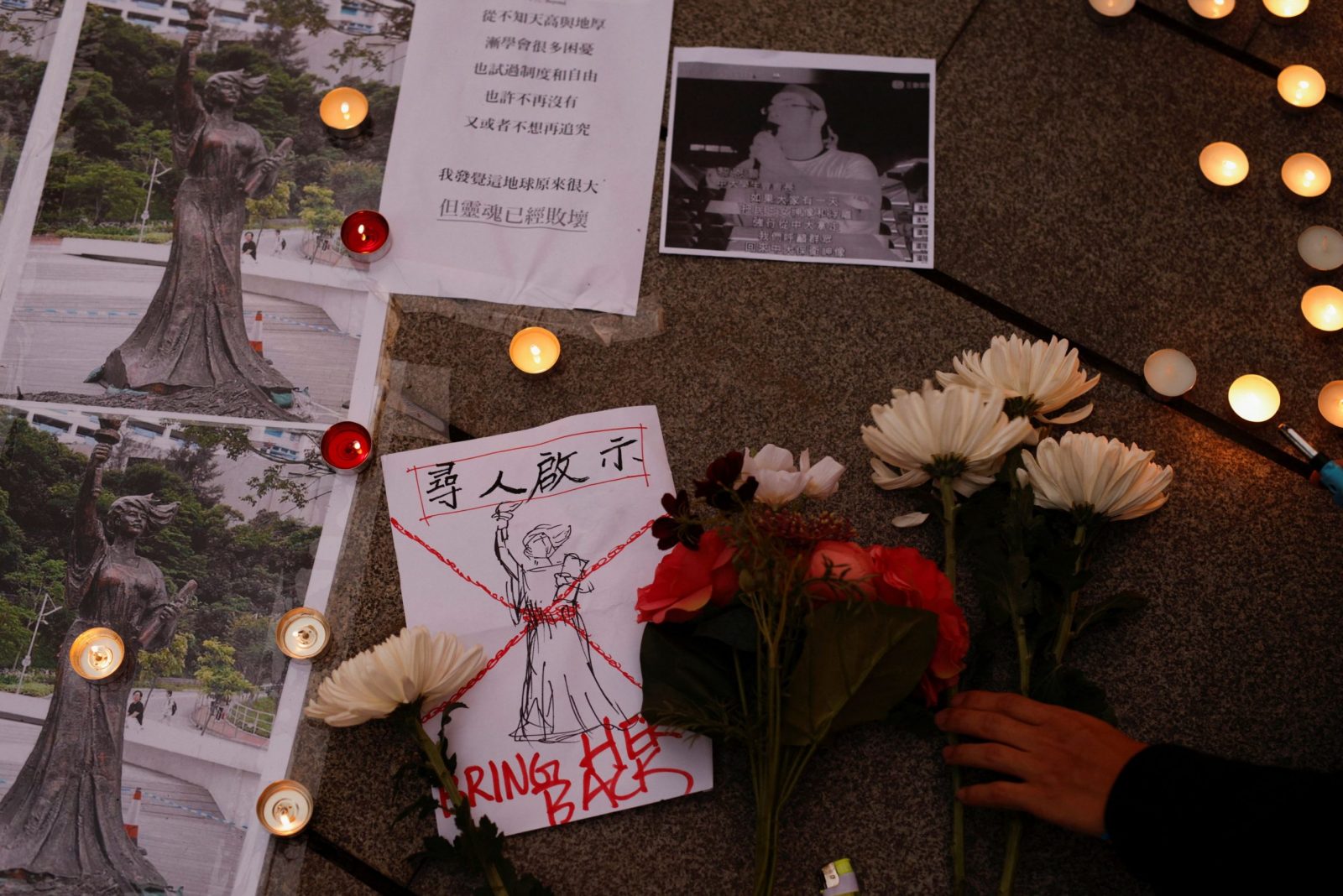 Flowers and images of Goddess of Democracy statue are placed by students at the place where it used to stand, at The Chinese University of Hong Kong, after being removed by school authority, in Hong Kong, China, December 24, 2021. REUTERS/Tyrone Siu

Part 3: Remaking Hong Kong: The Order from Beijing is to Brainwash Students

HONG KONG — Ninety lawmakers of the Hong Kong Legislative Council swore an oath of allegiance on December, 3, 2021, declaring their loyalty to the Hong Kong Special Administrative Region of the People’s Republic of China.

Below the emblem, 89 pro-Beijing lawmakers and one centrist lawmaker elected in the 2021 legislative election, which forbade pro-democracy candidates, each read the oath.

Among those who took the oath was Holden Chow (周浩鼎, Shu Kotei), the 42-year-old vice chairman of the largest pro-Beijing political party in Hong Kong, the Democratic Alliance for the Betterment and Progress of Hong Kong (DAB). The party’s campaign was led by 35-year-old Rex Mo (巫成鋒, Fu Seihou).

The last time I saw Mo was during the district council elections in November 2019, when he represented DAB but was defeated by a pro-democracy candidate. This time, he was almost unrecognizable with his plump face that brimmed with confidence.

I remember one particular moment from his campaign.

As widespread pro-democracy protests called for universal suffrage and the true realization of “Hong Kong governed by Hong Kong people,” Mo was handing out flyers on the street. DAB supporters rushed up to him and whispered something in his ear. Mo kept looking around suspiciously, as if they were doing something wrong.

More than two years later, Mo’s position had not changed.

“We have a common destiny with the Chinese government. As the state prospers, Hong Kong will also flourish,” he claimed. “When I lost the election, I was bitterly disappointed and became worried about the future. But I couldn’t keep focusing on that because of the spread of the coronavirus, so I devoted myself to local civil services.”

In September 2021, Mo was appointed as one of the 1,500 members of the Election Committee, the function of which is to select the chief executive — the head of the Hong Kong government — and a portion of the Legislative Council members.

The national security cases were to be heard by judges appointed by Chief Executive Carrie Lam. I had expected a deathly hush in the courtroom because of the judges’ conspicuously pro-government trial management and decisions thus far, but it was anything but.

At the defense lawyer’s statement, cheers and applause erupted from the defense table and the gallery, which were occupied by 47 pro-democracy activists including 25-year-old Joshua Wong and 57-year-old Benny Tai. Even when the bailiff issued a warning, the clamor did not abate.

Because of the National Security Law’s escalating clampdown on the pro-democracy camp and after much contemplation, Sin decided to resign from his district council seat and study film. He plans on leaving the city because his past record as a pro-democracy district council member can only be a disadvantage in Hong Kong society.

Sin had given special attention to the voices of local residents during the 19 months he was a district council member. He made the following prediction:

“At first glance, it looks like Hong Kong has become peaceful. But that’s because the oppressed citizens have no way to vent their frustration. I don’t know what form it will take, but I suspect it will eventually explode.”

Mourning the Best of Both Worlds

The downtown area of Hong Kong, where colonial Western-style architecture still stands, is home to a restaurant that became a gathering place for pro-democracy citizens during the 2019 protests, playing a key role in the pro-democracy movement.

The protest slogan “You cannot shoot through our convictions” can still be found in the margin of the restaurant’s menu.

The restaurant is run by a woman in her 30s. Looking back at the good old days of Hong Kong, she said: “Hong Kong used to be a place where the cultures of the East and West mingled. It had the best of both worlds: the Western values of knowing your rights and asserting them, and the Eastern values of keeping the rules.”

The Chinese Communist Party (CCP) has taken away Hong Kong’s freedom in an attempt to achieve “governance by patriots,” and Chinese despotism is about to overtake the city.

“Nobody talks about politics in my restaurant anymore. People keep quiet to protect their lives and their livelihood,” the woman said.

But some customers whisper, “Let’s do our best” as they leave the premises.

What Hong Kong is currently experiencing is the opposite of what happened during the time of the 2019 Hong Kong District Council elections, and it’s not a coincidence. It is the fate of a city that has become the front line of the battle between democracy and despotism.

This is what the sacrifice of the people of Hong Kong taught the world: Western and Eastern cultures can coexist, but democracy and despotism cannot.

There is only room for one. Where despotism reigns, freedom and democracy die.