A Conversation with the Dean of the Diplomatic Corps, Manlio Cadelo (Part Two) 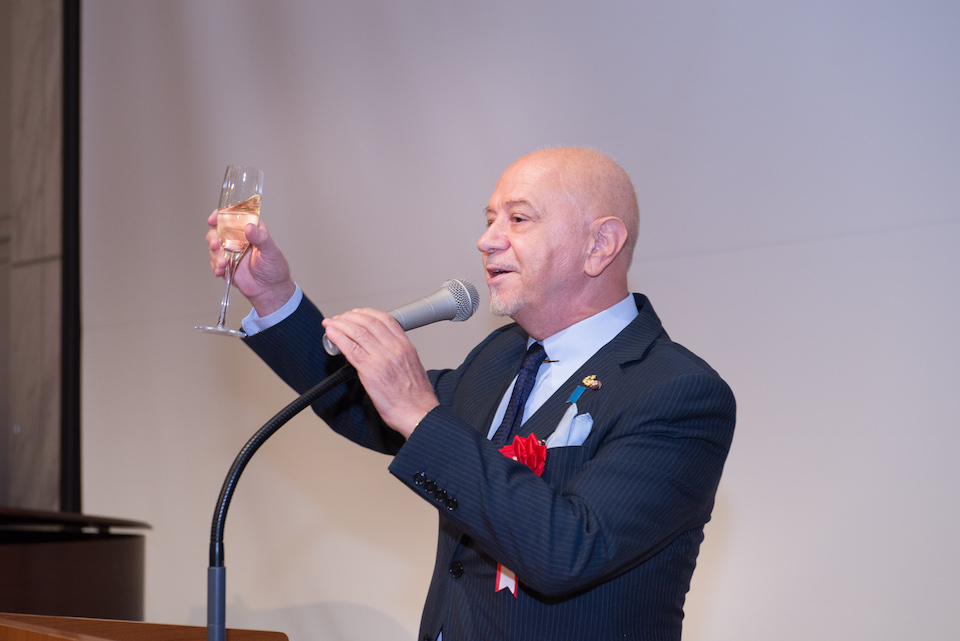 Ambassador Manlio Cadelo of the Republic of San Marino was born in Siena, Italy and studied at the Sorbonne in Paris. He first came to Japan in 1975 and relocated to Tokyo where he worked as a journalist before becoming the consul of the Republic of San Marino in 1989 and later became the San Marinian ambassador extraordinary and plenipotentiary to Japan in 2002. He was appointed dean of the Diplomatic Corps, or representative of all diplomats stationed in Japan, in May of 2011. His published works include Japan: the friendliest country in the world and This is why Japan is respected by the rest of the world. What follows is the second part of the summary of his conversation with Sankei Shimbun staff writer Takao Harakawa.

I think there is a big problem with how massive terrorist attacks in Europe, and in particular in France, have been framed when they are referred to them as “kamikaze” attacks. I really wish that people would quit using the word “kamikaze” in this way. The kamikaze and terrorists are tremendously different. The kamikaze were military pilots, and they flew missions against military vessels. The kamikaze were heroes, because they knew that they would never return home from their sorties, and yet they flew out anyway for the sake of their country, Japan. They did not indiscriminately kill civilians, as terrorists do. The kamikaze sacrificed themselves for their country. They died for their country. This is why the kamikaze are extraordinary people.

When I was working as a journalist, I interviewed men who had been members of a kamikaze squadron but had survived. Some of the men’s planes ran out of fuel before they could reach their targets, or else developed engine trouble along the way. In other cases, the men were preparing to fly out when the war ended. There were many different reasons why former kamikaze pilots lived through their experiences. I also interviewed a man who had been in preparatory kamikaze training. He said, “Years have passed since the end of the war, and I suppose there are no young people now who would do what we did for our country, but times then were hard. Japan was poor, and we were out of options. We didn’t know about the United States, and we were gravely concerned lest we be put under American colonial rule and made to be like slaves. Therefore, it is not wrong to die for one’s country.” I had tremendous sympathy for this man’s sentiments.

So it is my firm wish that the equivocation of kamikaze and terrorists will end in Europe, in France. I said as much to the Japanese Ministry of Foreign Affairs. We already have a word for this kind of thing: “terrorist.” Is it not odd that someone would intentionally use “kamikaze” to denote “terrorist”?

Compared with 42 years ago, when I first came to Japan, I feel that Japanese society today has become overly rule-bound. When I came to Japan, there used to be more flexibility in a wide variety of things—more so than today. For example, I enjoy having a glass of wine with my meals. In the past, I could bring a bottle of wine with me into a restaurant, and the owner would say, “OK, sure, go right ahead.” He wasn’t thinking only about making money—his primary concern, I think, was that his customers enjoy themselves. If I tried to bring my own wine into a restaurant today, I would either get fussed at or I would have to pay some kind of charge.

People have been talking a lot lately about minpaku—private residences taking in occasional guests. Some people are in favor of relaxing regulations on minpaku and others are against it. But there are minpaku everywhere in the world. Instead of paying a steep hotel bill people choose to economize on accommodations and instead have a meal at a nice restaurant, or buy expensive souvenirs to bring home, or else just stay longer in whatever country they are visiting. These are the kinds of foreign visitors who use minpaku. If many foreigners were to spend a longer time in Japan, there would surely be an increase in sales for taxi drivers, bus companies, water utilities, souvenir shops, and restaurants. I know of buildings in Japan which have signs out front in English reading, “Absolutely No Paying Guests in Private Residences.” This kind of thing is not friendly at all. It looks bad. It goes against Japanese hospitality. We should think positively about minpaku and try to help their use expand.

Another area in which flexibility has fallen by the wayside is the issuing of parking tickets. Of course, one should not park illegally. But we are human beings, and sometimes we have to run in to use the restroom, or we want to buy something to drink. If we don’t allow even five minutes for people to tend to their bodily needs, then there are bound to be even bigger problems down the line than these.

Unlike in the past, Japan today is a country that says “don’t” too much. Don’t do this, don’t do that. This increases stress, which increases the number of suicides. It is not a good situation for the Japanese people. Discipline requires rules and limits, it’s true. But there must be a balance. I suggest that we try to remember to relax and to slow down.

Takao Harakawa is a staff writer for the Sankei Shimbun