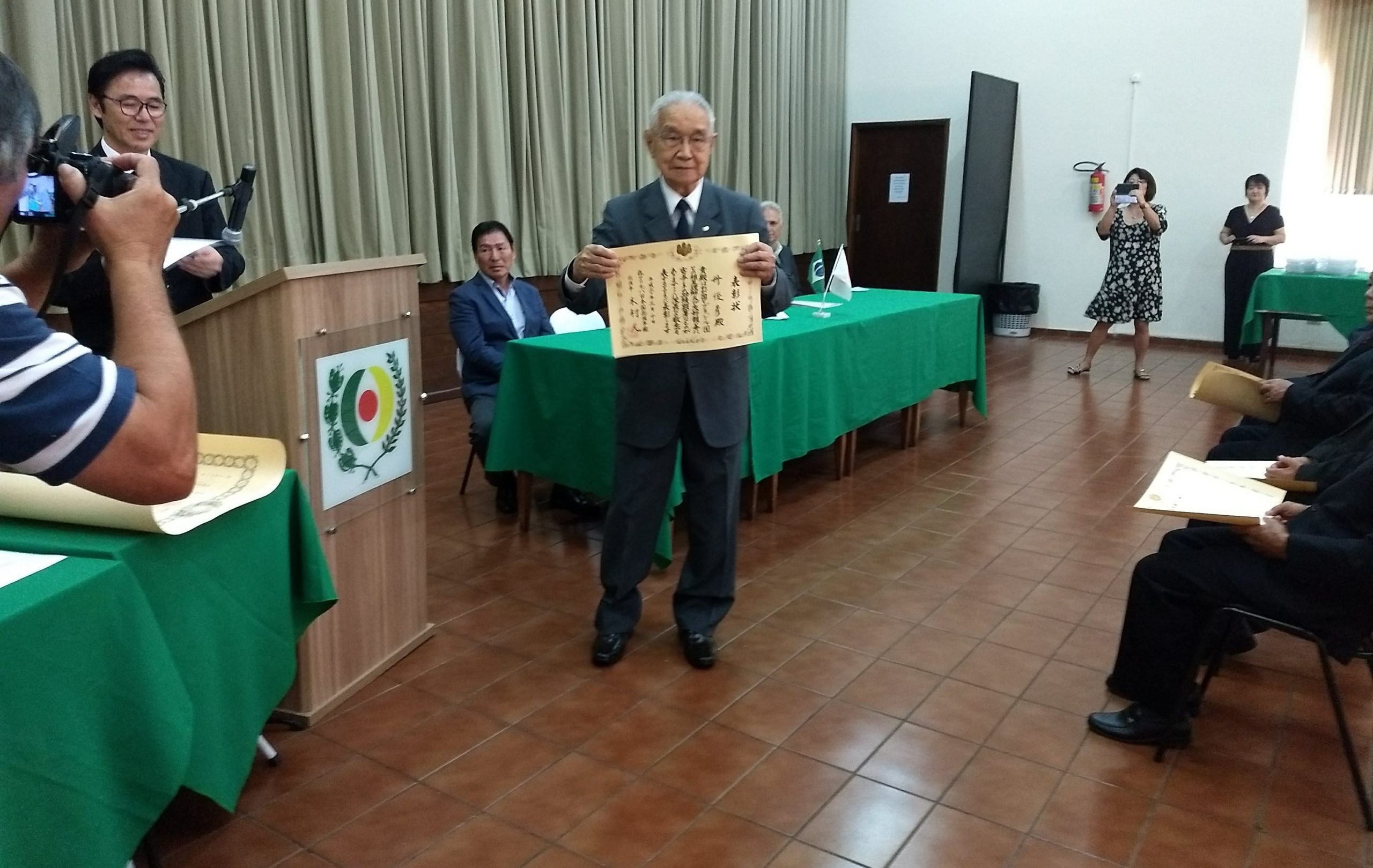 Toshiko Tan received a diploma of honor from the Consul General of Japan in Brazil in 2019.

LONDRINA, BRAZIL ー There’s a connection between Brazil and Japan and it was not tied just when Shinzo Abe popped out of an oversized green drainpipe dressed as Super Mario, the star of the popular Nintendo video game series, at Rio’s 2016 Summer Olympics Closing Ceremony.

Japanese immigration to Brazil officially began on June 18, 1908, when the ship “Kasato Maru” docked in São Paulo, bringing 781 farmhands to farms in the interior of São Paulo.

At that time, Brazil suffered from a lack of rural labor and admitted immigrants from different countries. They were recruited to work on coffee farms.

The Japanese relationship with sports is rooted in traditions, such as the realization of the undokai, an athletic competition that takes place in Japanese schools. There are reports that on the first trip of “Kasato Maru” to Brazil, an undokai was carried out on board the ship, as a way of entertaining passengers during the trip.

Japanese immigrants to Brazil grew in numbers before and after World War II, and today form the largest Nikkei society in the world, estimated at 1.6 million people.

During World War II, Brazil and Japan became enemy nations. For the Japanese who were established in Brazil it was a very difficult period, because they were persecuted all the time. Communication in the Japanese language was prohibited in the country, which made dialogue between Japanese people living in the country and their children born in Brazil difficult. Newspapers that were published in Japanese were banned from circulation.

Toshihiko Tan was born in Brazil, in 1930, and says that those days during World War II, were heavy.

“At school the children practiced bullying,” Tan recalls. “Even though I was born in Brazil, people said: ‘Japanese, go away to Japan.’ We always got into friction with other people. People cursed us a lot.

“That behavior towards us only began to change when Japan rebuilt itself in 25 years, showing the organizational capacity of the Japanese to rebuild itself.

“During the 1964 Tokyo Olympics, coincidentally my mother went to Japan because my grandmother had passed away. She didn’t go to Tokyo because my family is from Shikoku, Ehime Prefecture. When she returned to Brazil she brought me a lot of souvenirs about the event.”

At that time Tan was already working as a dentist.

“I was a sportsman and mainly liked to play basketball, but I played different sports like volleyball, soccer, swimming, athletics,” he says.

Tan also played baseball, and in the 70s became the director of a municipal sports authority in Londrina, a city in Southern Brazil, where he lives.

“I am of Japanese descent, and the Tokyo 2020 Olympics is a world event, and a great opportunity for Japan to show its organizational power again,” Tan says. “But in my opinion, this Olympiad should not be held now. Maybe next year, when [we don’t] have this disease anymore.”

Although the Olympics will begin this week and be held without spectators from the public, Tan believes that postponement would be the most prudent.

“I believe it is Japan’s crowning achievement as a great sporting power,” he says. “The country encourages sports a lot, even in primary schools, where physical education classes are held. The 2020 Olympic Games will be a major world event.”

Author: VITOR OGAWA
Vitor Ogawa is a Brazilian journalist of Japanese origin. He worked as an editor at a TV Globo affiliate and also as a reporter for the Folha de S.Paulo newspaper. He was a sports editor for the International Press newspaper in Tokyo and currently works as a reporter for the Folha de Londrina newspaper. He lived in Japan at two different times, once in the 1990s and the other in the 2000s.

Vitor Ogawa is a Brazilian journalist of Japanese descent. He worked as an editor at a TV Globo affiliate and also as a reporter for the Folha de S.Paulo newspaper. He was a sports editor for the International Press newspaper in Tokyo and currently works as a reporter for the Folha de Londrina newspaper. He lived in Japan at two different times, one in the 1990s and the other in the 2000s.