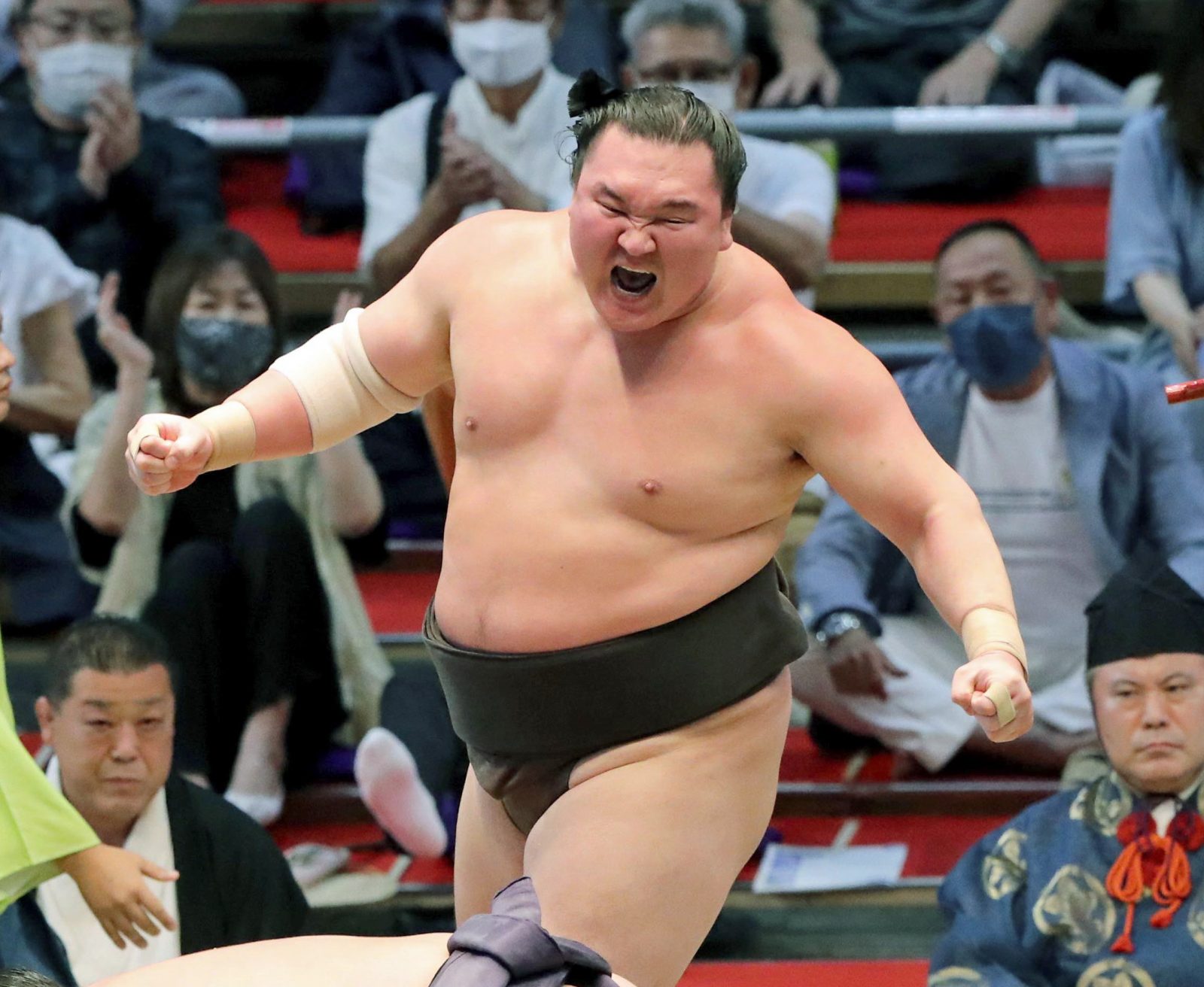 Hakuho celebrates after defeating Terunofuji on July 18 at Dolphins Arena.

Grand champion Hakuho silenced his critics on Sunday, July 18 when he overpowered fellow Mongolian Terunofuji to capture his 45th Emperor’s Cup in a winner-take-all final at the Nagoya Grand Sumo Tournament.

After a prolonged stare-down prior to the start of the bout at Dolphins Arena, the yokozuna stunned ozeki Terunofuji with a crushing forearm to the head shortly after the face-off.

The two wrestlers then exchanged a series of slaps before Hakuho got ahold of Terunofuji’s arm and threw his opponent down to improve to 15-0 and secure the win. Hakuho celebrated with a rare show of emotion, pumping his fist and shouting in jubilation.

It was a stunning comeback for Hakuho, who missed all or part of the last six meets and had knee surgery in March. His prolonged absence resulted in a warning from sumo officials and calls by some for his retirement.

“I felt I was mentally and physically cornered,” Hakuho said. “It was 15 years ago that I was here [in Nagoya] as a new yokozuna and I wanted to go back to the basics and I felt that is what led to this championship.”

With the victory,  the 36-year dispelled any notion of retirement, saying he will be back for the next tournament in September. With his family in the stands, Hakuho paid tribute to them and those who supported him while vowing he’s not done yet.

“I now have 899 wins and need one more to make it to 900 so I will aim for that next time,” Hakuho said. “I wanted to be competitive every day here and proved that I can do that.”

Hakuho improved to 10-4 overall against Terunofuji.

Despite the loss, it was an impressive outing for Terunofuji, who dropped to 14-1 but is almost certain to be promoted to sumo’s highest rank. A final decision will be made at a meeting of Japan Sumo Association officials on Wednesday, July 21.

Terunofuji’s performance at the 15-day tournament marks another stunning chapter in his remarkable comeback.

The 29-year-old Mongolian reached the rank of ozeki from July 2015 to September 2017, but he saw his career nearly ruined by injuries to both knees and illness. He began his comeback from the fifth-tier jonidan division in March 2019.

Terunofuji fought his way back and returned to the elite makuuchi division last summer, when he won his second career Emperor’s Cup at the July Grand Sumo Tournament on August 2.

On Friday after Terunofuji improved to 13-0, sumo elder Isegahama was quoted by Kyodo News saying, “It’s better to secure the championship but he’s already secured the requirement in terms of result.”

In other major bouts, ozeki Shodai secured a winning record when he spun Takayasu around and shoved out the sekiwake to pick up his eight win against seven losses. Takayasu went 7-6-2 in Nagoya.

Komusubi Meisei hauled down No. 12 maegashira Kagayaki (7-8) to finish with a winning record of 8-7.

Komusubi Wakatakakage used a nifty arm throw at the edge of the ring to dispatch sekiwake Mitakeumi (8-7) to improve to 5-10.