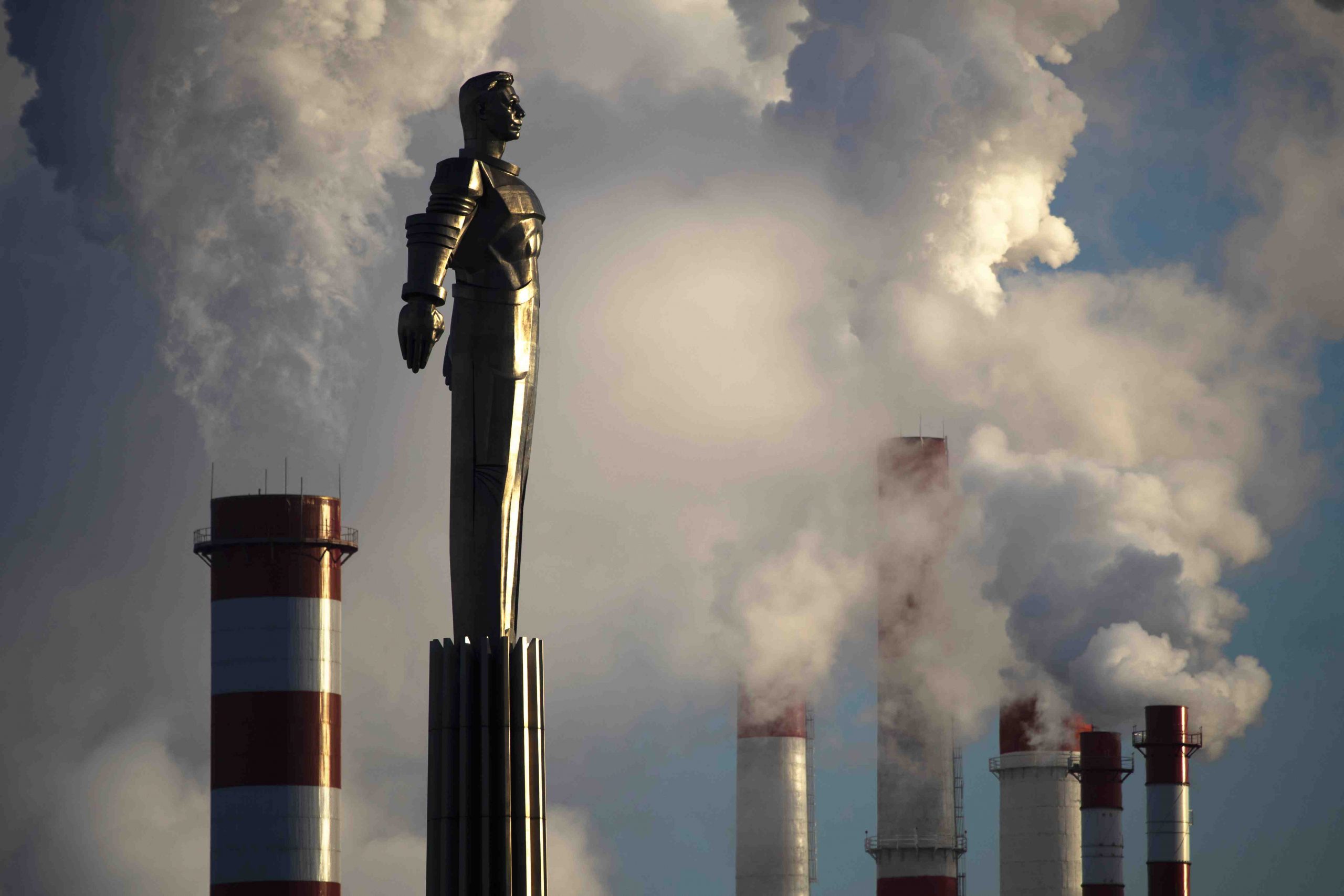 Steam rises from the heating plant behind a monument to Soviet cosmonaut Yury Gagarin in Moscow, Feb. 15, 2021. (AP Photo/Pavel Golovkin)

This April provided an opportunity to ponder two major anniversaries of events in the history of the Soviet Union, which collapsed 30 years ago. One was its zenith, and the other its absolute low point.

The zenith occurred on April 12, 1961 when 27-year-old USSR air force pilot Yuri Gagarin became the first human in space. He traveled aboard the Vostok 1 spacecraft.

The low point arrived 25 years later, on April 26, 1986. On that date the No. 4 reactor at the Chernobyl nuclear power plant in the Ukrainian region of the USSR exploded. It became the world’s worst nuclear disaster.

Literally, heaven and hell. It has been sixty years since the “Gagarin moment,” and 35 years since Chernobyl.

Gagarin spent just 108 minutes in outer space, but it was a historical feat that excited the Soviet Union and the rest of the world. Upon his return to Earth, he commented on how blue the planet is, accentuated by the darkness of space.

The ecstatic Soviet leader of the time, Nikita Khrushchev, had beat the United States into space and wanted to show off the country’s communist system and rocket technology to other countries. He sent Gagarin around the world. In May 1962, the cosmonaut visited Japan and was warmly welcomed in cities such as Tokyo, Osaka, Kyoto, and Sapporo.

One year after venturing into space, Gagarin said in his speech here that the world’s two superpowers should put an end to their meaningless arms race and come together through new space-related development. He also praised his home country, communism, and wished for peace.

The Collapse of the Soviet Union

In February 1956, Khruscheve made his “secret speech” criticizing Stalin after which he pursued a policy of peaceful coexistence with the West.

However, Gagarin’s hopes for the future were sidelined. In October 1964, Khrushchev was suddenly ousted. Hardliners objecting to Khrushchev’s inadequate handling of the Cuban Missile Crisis, which brought the Soviet Union to the brink of nuclear war with John Kennedy’s America, were among the reasons given.

Not long after, Gagarin died in a plane crash during fighter training on March 27, 1968, at the young age of 34. The cause of the crash is unknown.

Moreover, the Soviet Union, which Gagarin wanted to “last forever,” collapsed in December 1991, just 30 years after his voyage into space. The final straw in the collapse of the Soviet Union was the Chernobyl catastrophe of 1986.

From the Brezhnev era onward, the wheels of Soviet history have turned in an opposite direction to that idealized by Gagarin. In late 1979, the Soviet Union invaded Afghanistan.

In March 1983, the U.S. Reagan administration, which referred to the Soviet Union as an “evil empire,” launched its Strategic Defense Initiative – also known as the “Star Wars” program.

Meanwhile, the Kremlin, which had been involved in the space race and the arms race, faced financial collapse and national ruin following the huge costs connected to the Soviet-Afghan War.

Spreading the Darkness of a New Star Wars

In the wake of the Chernobyl catastrophe, huge amounts of radiation spread across Europe and even reached Japan. However, the Kremlin hid the problem for a long time, and its disregard for human life led to widespread damage.

This unprecedented human disaster led to a global loss of trust in the Soviet communist system, effectively forcing the Gorbachev administration to embrace a policy of greater transparency called glasnost. The Soviet Union may have led the space race at the start, but ultimately it lost out in the space arms race, and in science and technology.

In the buildup to the collapse of the Soviet Union, Yuri Gagarin anecdotes that had previously been kept secret came to light in the new era of free speech. What were they?

These were Gagarin’s words as he re-entered the Earth’s atmosphere, thinking he was about to die because he could see flames outside his spacecraft. (The incident did not cause him to die, and he returned safely to Earth.)

For President Vladimir Putin, Gagarin is one of the few “heroes” who can still stir up feelings of patriotism among the Russian people half a century after his death.

On April 12 this year, 60 years after Gagarin’s voyage into space, Putin emphasized that Russia “must maintain its position as a major nuclear and space power”.

Currently Russia, following China’s lead,  is developing anti-satellite weapons that can destroy U.S. military satellites. And in March, Russia and China agreed on the joint construction of an international lunar research station which, they say, will aim for “peaceful uses of outer space”.

To counter, the U.S. re-established the United States Space Command in 2019, and Japan set up its Space Operations Squadron the following year.

As tensions emerge between the U.S. on the one hand, and China and Russia, there are concerns that there might be a real life “Star Wars”.

So, sadly, the 60th anniversary of Gagarin’s mission into space has happened under the shadow of a very dark cloud.

(Read this Sankei Shimbun Sunday essay in Japanese at this link.)