[A Visit to the Atelier] How Kuniyoshi Expanded my World 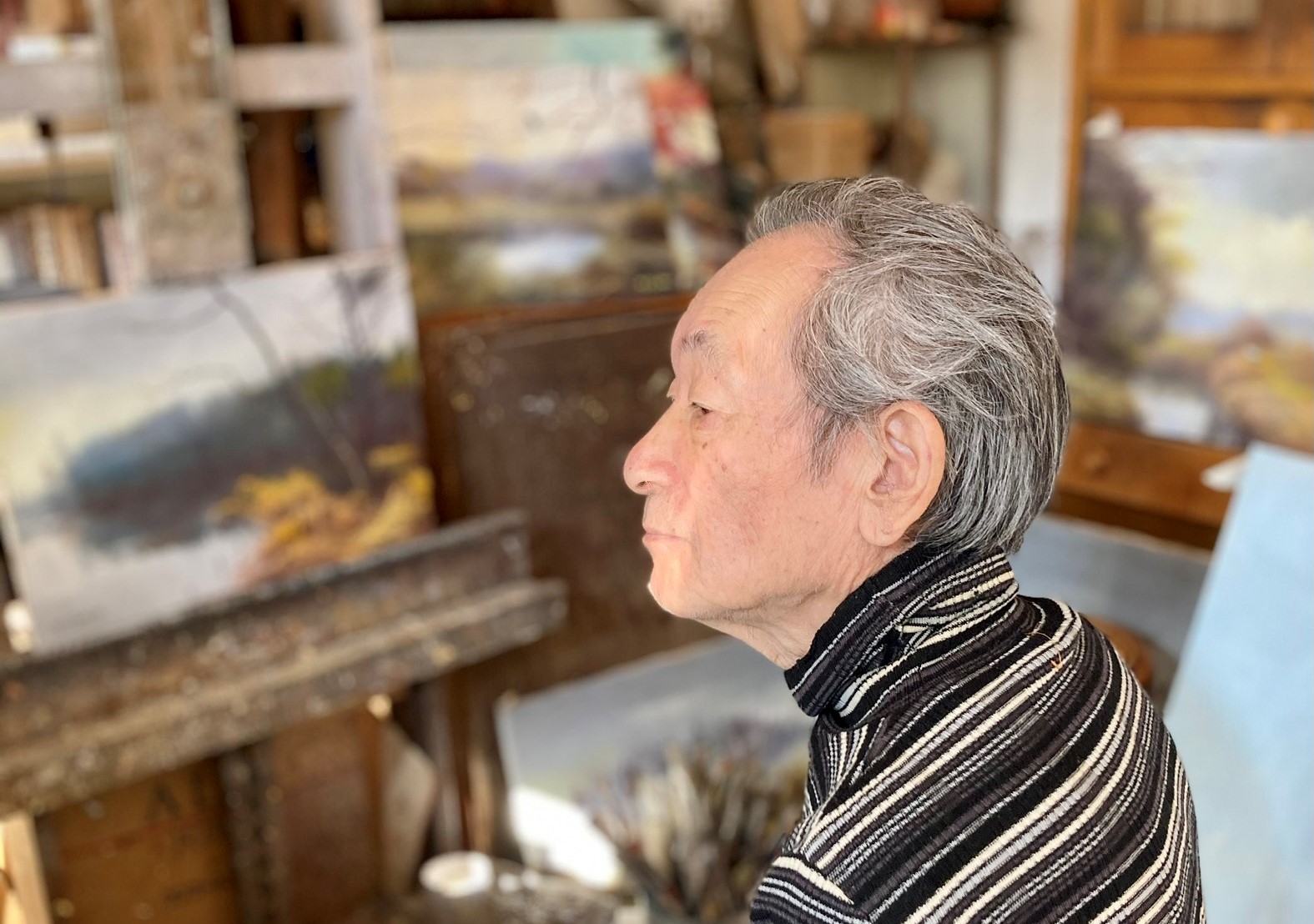 This year marks the 160th anniversary of the death of the renowned ukiyo-e artist Utagawa Kuniyoshi, who was born in Nihonbashi.

For this occasion, Monthly Nihonbashi, (Gekkan Nihonbashi) a magazine conveying the charms of Nihonbashi, the center of Edo culture, interviewed Toshihiko Isao, an oil painter known for his research on Kuniyoshi and his column [A Visit to the Atelier] published by JAPAN Forward.

Every month for 27 years, Mr. Isao has been providing a work of art by Kuniyoshi from his collection to adorn the cover of Monthly Nihonbashi. The editor of the magazine caught up with Mr. Isao for an interview about the artist’s first encounters with Kuniyoshi and the artist’s appeal.

Tell us how you started collecting Kuniyoshi’s ukiyo-e. What was it about his work that fascinated you when you first encountered it?

Ukiyo-e was expensive at the time, and I didn’t think much of it at first. But then I saw a ragged ukiyo-e print for sale at a second-hand bookshop at a reasonable price.

In 1972, when I held my own exhibition in Nihonbashi, the art critic Jinichi Suzuki, who was at the exhibition, gave me an invitation to an exhibition of Kuniyoshi’s work called “Kuniyoshi: An Ukiyo-e Artist on Fire.” I guess you could say that exhibition opened my eyes to Kuniyoshi.


What was it about Kuniyoshi that fascinated you?

I found Kuniyoshi's art, in particular his heroic warrior pictures, very dynamic and energetic. I like baroque music, so I thought of Kuniyoshi's ukiyo-e like baroque. Baroque is unlike art from the classical renaissance, an art form with romantic elements.

Besides, Kuniyoshi had a very bright personality and was well-liked by his disciples. There is no other ukiyo-e artist who had as many disciples as Kuniyoshi. Sharaku was so eccentric that he probably didn't have any disciples at all (laughs).

Kuniyoshi also had a cheerful, bossy personality that everyone loved, and he was very kind-hearted. There is a story that he took care of his mother-in-law even after his wife died. I fell in love with Kuniyoshi because of his personality.


'Even if it's cheap, one day people will accept it.'

You possess many of Kuniyoshi's ukiyo-e, but it must have been challenging to collect that many of his works?

Kuniyoshi's ukiyo-e cost thousands of yen at the bottom and millions at the top. Since he designed so many prints, there are many inexpensive ones, and it was easy to get into at the time.

Back then, if you were rich, you could buy ukiyo-e at auctions. But in my case, I was a freelancer and had a lot of time on my hands. So I frequently collected them at antique shops, second hand stores, flea markets, and the old bookstores in Kanda and Jinbōchō in the Chiyoda district of Tokyo.


What was the best thing you could get your hands on?

I once found one of Kuniyoshi’s ukiyo-e carelessly pinned to the wall of a department store at an antiquarian book show (laughs).

Kuniyoshi’s reputation was not yet established at that time, and second-hand bookstores were not familiar with his art. However, this print was a significant work that cannot be ignored in studies of Kuniyoshi’s oeuvre. The title of this work is “Brave Kuniyoshi with his Paulownia Design” and at the time, it had not yet been displayed at a big Kuniyoshi exhibition in the post-war era.

Bookstores carried stacks of fine prints by the artist Munakata Shikō, who only became famous when he became the first Japanese artist to win the Grand Prize for Prints at the International Art Exhibition of the Venice Biennale. It was such an era.

Is there any chance that undiscovered Kuniyoshi works will turn up in the future?

I think there are still undiscovered works.

So many ukiyo-e were published in the past, not just by Kuniyoshi. They had at least 200 copies of most of them printed, so there are still hundreds of ukiyo-e by Kuniyoshi, who is thought to have designed dozens of pictures every day, and I believe that the works discovered so far are only the tip of the iceberg.

Some people want to become collectors of ukiyo-e, but the price of ukiyo-e has gone up. Do you think it is still possible to become an ukiyo-e collector?

If you study hard and are enthusiastic, you can compile a good collection with the financial resources available to you. I bought one of the Kuniyoshi works that was featured in the color pages of an exhibition catalog with works from my collection for a mere 300 yen (laughs).

I tend to purchase unusual things that people pay little attention to. If you find value in something, others will recognize this value someday, even if it is cheap.


From next month’s issue, you will be selecting ukiyo-e from the Meiji era for the cover of this magazine from your collection. How did you become interested in Meiji-era Ukiyo-e?

It's hard to understand Kuniyoshi’s legacy by just looking at his prints. So I looked at the ukiyo-e of other artists and studied the works of Kuniyoshi’s disciples.

Then, using Kuniyoshi’s work as the main trunk, the branches spread out, and before I knew it I had become interested in Meiji-era Ukiyo-e.

(Reprinted with permission from the March 2021 issue of Monthly Nihonbashi.)


Find other parts of this series, [A visit to the Atelier] on JAPAN Forward, at this link.