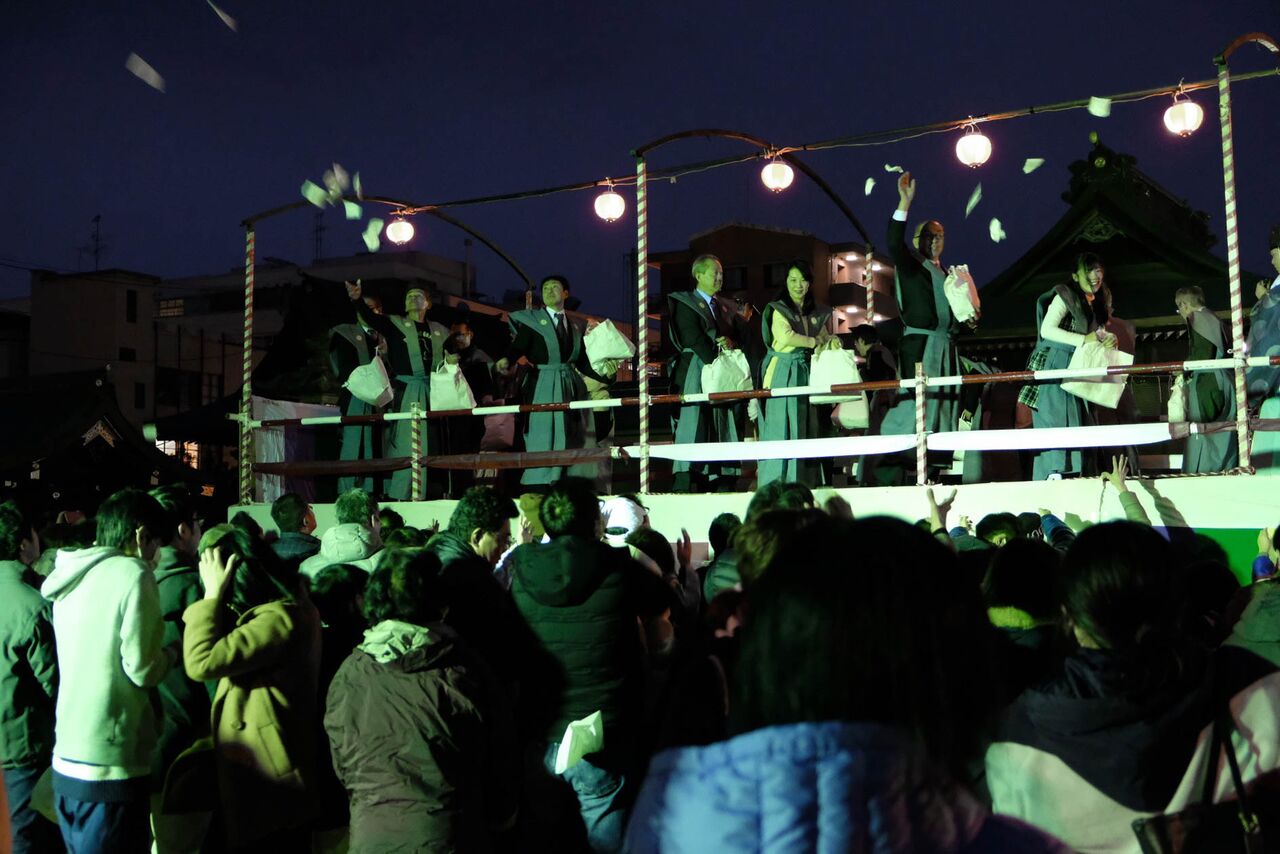 On February 3rd every year, Japan celebrates Setsubun, a festival to hail the arrival of spring. There are many festivals throughout the year in Japan but Setsubun is perhaps the most unique one I have experienced since arriving here in August 2018.

What makes the Setsubun festival so unique is the ritual of “mamemaki,” where roasted soybeans are thrown while shouting “Oni wa soto! Fuku wa uchi” (“demons out, happiness in”). Everyone then picks up the soybeans and eats one for each year of their life, plus one to bring them good luck for the year ahead.

On the Friday before Setsubun, one of the elementary schools where I work performed the ritual of mamemaki in the school gym. As I entered the school, I noticed things were quieter than usual, and no one was in sight. The deputy head teacher then came over and asked me to go to the school’s gym.

As I entered the gym, I found most of the students were sitting in a semicircle, while some older students were standing in front of them wearing Oni (demon) masks. Luckily, two of the teachers who speak English came over to me and explained what was going on. 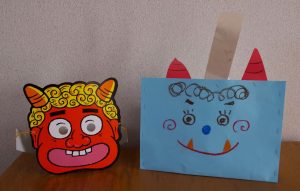 I was then given a paper pouch with an Oni drawn on it and asked to go with the 6th grade class into the middle of the gym. The students started shouting “Ganbatte Şen sensei!” which means, “do your best Şen sensei”. As we approached the center, the students wearing Oni masks began throwing the soybeans at us so that we could catch them in our pouches. It’s fair to say that I did a terrible job catching the soybeans and probably crushed half of them under my feet as they landed on the floor.

Later in the day it was time to teach my 6th grade English class. What I didn’t know was that the Setsubun festivities were set to continue.

Towards the end of the lesson, the 6th grade teacher handed me an Oni mask to wear. It was now my turn to play the Oni and throw the soybeans at the students. The only problem was that the mask was so small, I could only see out of one of the eye holes!

It was a lot of fun celebrating Setsubun at school with the students, but I also had the opportunity to experience Setsubun at a shrine. 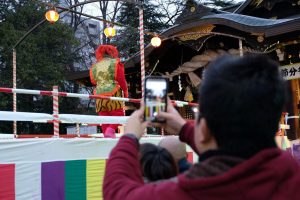 On Sunday February 3rd, I came across a Setsubun festival taking place at the Fukushima Inari Shrine. We headed over to the shrine just before sunset and, with the large crowd of people, eagerly waited for the festivities to begin. 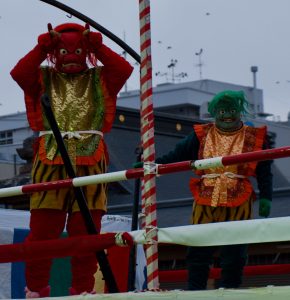 Before long, two men came out dressed almost head to toe as Oni and approached the stage set up for the festival. I say almost head to toe because one of the Oni was wearing big fluffy pink boots, which didn’t seem very demon like, but he still managed to look scary. 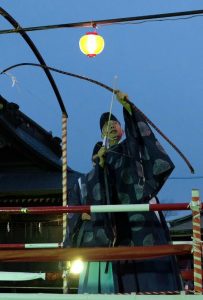 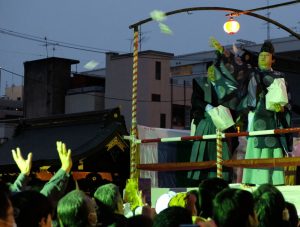 Once the sun went down a recorded version of the chant, “Oni wa soto! Fuku wa uchi” started playing through speakers and a combination of priests and members of the Fukushima city community walked around the stage with the Oni, throwing bags of soybeans into the crowd.

Everyone was having a fantastic time trying to catch as many bags as they could. I knew things were serious when people were actually putting their cameras away to keep their hands free for the important duty of catching. One family came prepared with a large plastic bag which they used as a net to catch the soybeans.

As I had already experienced Setsubun at school and felt I had secured my luck for the next year, I decided to stand back and let others catch the bags of soybeans. However, a very kind Japanese lady noticed that I wasn’t catching any, so she came over and gave me some.

It’s safe to say that I got the full Setsubun experience – and now I have just under 12 months to improve my catching skills for next year.

One of the things I love about Japan are the festivals that occur regularly throughout the year. There is always something to look forward to in Japan, and it wouldn’t surprise me if this is one of the reasons everyone here stays so youthful.

Japan has brought so many unique experiences into my life – and I am just at the start of my journey here! I can only wonder what the rest of 2019 will bring.