A Warning from Japan: Deep Recessions Cost Lives Too 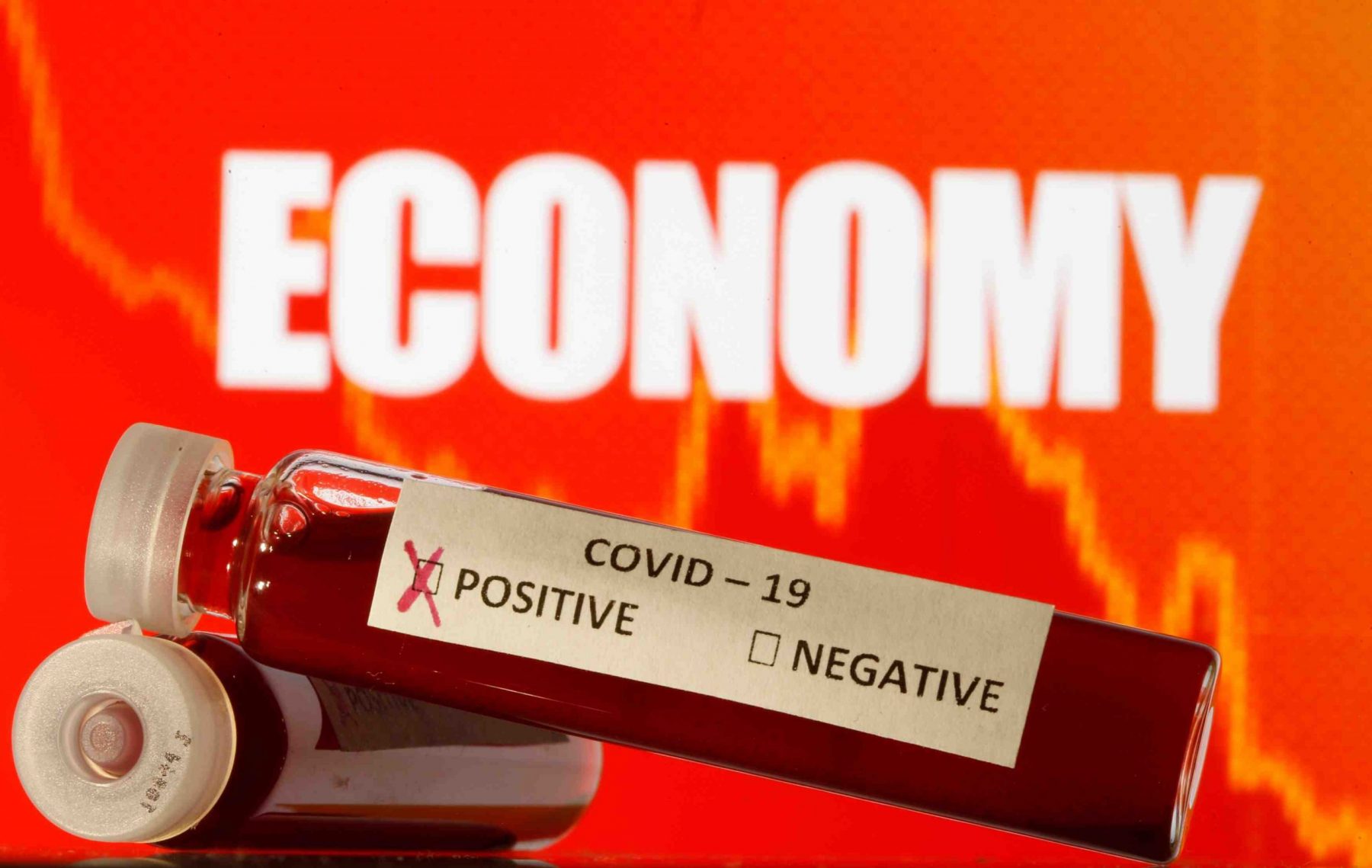 So, finally, the coronavirus crisis has forced Prime Minister Shinzo Abe to declare a state of emergency and thereby enable a “soft” version of the lockdowns that have been imposed in several Western countries.

Abe made the move reluctantly, after pressure from medical advisors and a fearful general public. Like many political leaders, he was confronted by a trade-off between virus control and a steep economic downturn.

That is not a binary choice between human life and material prosperity, as sometimes presented. Rather, it is the choice between two kinds of human and social damage. One is highly visible and immediate; the other, hidden from view and potentially longer lasting.

To make matters more complex, the range of outcomes is highly uncertain in both cases. When a vaccine will become available, whether the virus will survive the summer months and return with a vengeance later in the year, the true rate of morbidity, whether the world economy will bounce back or slide into stagnation — such crucial questions remain to be answered.

Abe’s approach will have been influenced by specific Japanese factors. Even after the recent mini-surge in confirmed infections, Japan’s death toll from the coronavirus crisis is, as of April 15, 146, or 1 per million people. This is by far the lowest in the G-7, the next lowest being Canada’s 24 per million, and then Germany with  42 per million, according to worldometer.

On the other side of the calculation, Abe would have been highly aware, probably much more so than other world leaders, of the cost in lives and well-being of deflationary stagnation and how difficult it is to shake off.

The most obvious illustration can be seen in the trend of suicides over the “lost decades” that followed the collapse of Japan’s bubble economy in the 1990s. Simply put, in the 15-year period starting from 1997, “excess” suicides (that is, more than the previous average) totaled 120,000, or 8,000 per year. That is vastly greater than the toll suffered by Japan ― and indeed most other countries ― from the coronavirus to date.

Why 1997? Because that was the year in which Japan’s post-bubble malaise morphed into structural stagnation. Before 1997, it was possible to believe that Japan would return to the seemingly effortless growth of the 1980s. After 1997, pessimism became the default setting.

The collapse of Yamaichi Securities, founded exactly 100 years before, was a “Lehman Brothers moment.” Ten thousand jobs were lost, but far more important was the financial contagion unleashed.

In the banking sector, the first domino to fall was Hokkaido Takushoku Bank, founded in the late 19th century to bring capitalism to the undeveloped territory of Japan’s northernmost island.

There were also major policy blunders as the government hiked the sales tax and wound down the public works spending that had ensured positive growth. In the second half of the year, the Asian financial crisis added to Japan’s woes.

The upshot was a surge in unemployment — not always visible in the official numbers — as companies shuttered factories and rationalized supply chains. Among small and medium-size enterprises, the supposition of “lifetime employment” had always been contingent on reasonable economic growth. That premise was now shattered. 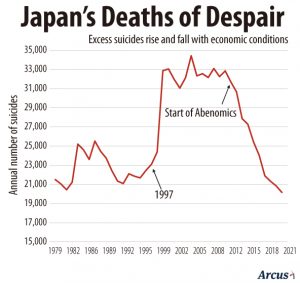 Economic Despair and Suicides are Risk Factors Too

When the number of suicides jumped by a third in a single year, some observers were so astounded that they dismissed the phenomenon as a fluke or an issue of data collection. Sadly, future events revealed that neither explanation was right. The number of suicides remained at an elevated rate until 2013, then started a steady descent. The total in 2019 was the lowest since records began in 1978.

The despair that drives people to suicide can have many causes and combinations of causes. A closer examination of the numbers confirms that economic conditions played a crucial role in the trends over the past 25 years.

First, nearly all the variation in the number of suicides is explained by male suicides. Female suicides, which account for about one third of the total, did not change much during the period. At that time, few women worked full-time jobs.

Second, the most suicide-prone age bands were, in order, 50-59, 60-69, 40-49 ― middle-aged, rather than elderly as with the coronavirus, and more likely to suffer financial setbacks and stresses.

Third, by far the most common employment category was “unemployed” ― 70% of the total.

To simplify, the brunt of the tragic surge in Japanese suicides was born by unemployed, middle-aged males. And while the rise was sharp, like the sudden and unexpected onset of the economic crisis that drove it, the decline has been a slow, steady process, reflecting the gradual, accretive improvement in the Japanese economy and, particularly, the labor market.

One of Prime Minister Abe’s greatest accomplishments has been to create the conditions in which such acts of self-destruction are now so few in historical terms.

Suicide is an extreme and highly visible example of the human suffering that severe economic downturns can generate. Mental and physical illness, homelessness, shortened lifespans, alcoholism and other addictions, family breakdown, social isolation, divorce, criminality, inequality — these are less direct, but nonetheless real side effects.

In developed countries people are used to measuring periods of economic debility in months. The Japanese experience attests they can last for decades, and you may never get back to what you once considered normality. That is something for other leaders to consider when assessing the length and severity of lockdowns.

What Nobel Prize-winning economist Angus Deaton calls “deaths of despair” — a category which includes deaths from addiction and car accidents too ― have already become a major social, and indeed political, problem in the United States. Japan emerged from its “lost decades” with its social capital intact. Many Western societies would find that a near-impossibility.