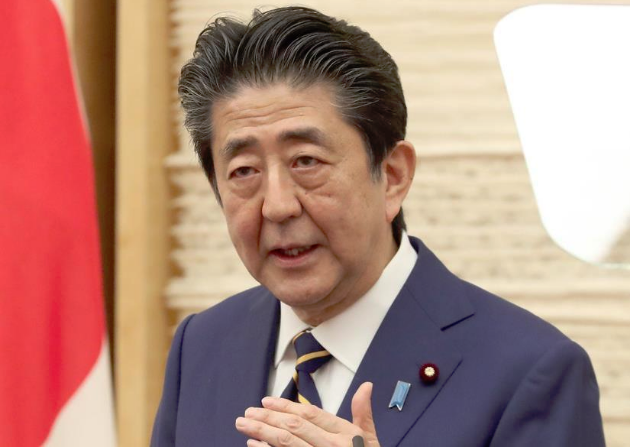 Japan has entered a new phase in the spread of the coronavirus disease, and it was clear by the context of the press conference that Prime Minister Shinzo Abe held Tuesday evening, April 7.

Just after 8 P.M., in a large room with journalists sitting on chairs several meters apart from each other, the Prime Minister addressed the nation gravely to deal with the sudden spike in the cases of infection in large cities like Tokyo and Osaka.

The first thing he did was to thank the medical workers for all they had been doing: “First of all, I would like to ask doctors, nurses, and hospital staff, experts, clinicians. I would like to thank you on behalf of all the Japanese people.  You have an immense responsibility on the front line of this battle. You are helping us save lives.”

Following that, Abe asked for people’s collaboration in a request which was largely similar to the restriction of movement seen elsewhere around the world: for them to decrease social interaction by at least 70%.

Abe also unveiled the largest economic package in history to address what he called the worst economic threat “since the Second World War.”

Finally, he called for people to have a sense of proportion and not panic. Abe reminded everyone that movement wouldn’t be restricted, and that the situation was still different compared to lockdowns abroad. This was to prevent people from rushing to the countryside, as what happened in other countries in Europe.

State of Emergency Cannot Be Delayed

The Prime Minister called the state of emergency for Tokyo, Chiba, Saitama, Kanagawa, Osaka, Hyogo, and Fukuoka at 5.45 P.M. during a Cabinet meeting on Tuesday.

It will take effect starting midnight of Wednesday, April 8.

Abe acknowledged that medical facilities were in a dire situation, and so a state of emergency had to be declared now.

“Mostly in cities like Tokyo and Osaka, the virus is continuing to spread, and we are reaching the limit of the hospital beds. The impact both physically and mentally is becoming stronger, and in hospital it’s quickly becoming a dangerous situation,” Abe said.

“We came to the conclusion that we can’t put this off any longer. After hearing the opinion of the experts we called the state of emergency,” he added.

Change in People’s Behavior Will Make the Lockdown Effective

Abe gave an estimate of what could happen if residents don’t comply with the request to drastically reduce social interaction: “It’s an urgent situation. In Tokyo, positive cases are now more than 1,000. The increase is exponential, and if we continue at this pace, in two weeks we will reach more 10,000; and the month after, 80,000. However, according to the experts, if we work together, if we decrease social interaction by 70% at least, 80 at best, we can peak out the spread in two weeks.”

To achieve this, the Prime Minister enumerated practical measures to take in the workplace. Unless one works in sectors that provide essential services (like supermarkets and banks), he encouraged smart working. When working remotely is not totally possible, Abe encouraged the decrease of office work by at least 70%, staggered commutes, and maintaining a safe environment with appropriate distances from colleagues.

In schools and hospitals, the Prime Minister asked for further use of technology — in the former, to encourage the use of online learning; in the latter, to ensure that those who need medical assistance but are afraid of the contagion can receive medical advice online.

In public places, Abe explained that, although walking and jogging was not a problem, people should keep a two-meter distance between them at all times, wear masks, and avoid crowded places with high risk of contagion like bars, nightclubs, and karaoke. In general, people are urged to not socialize with anybody outside the family unit.

To bring home the point, Abe appealed to everyone’s sensibility to protect their loved ones: “The scary part of this virus is that, even without having a fever, you might unknowingly have the virus, and you might pass it on. In particular to young people, but everyone, I would like people to think, ‘I might be infected.’”

The Prime Minister’s final call in his address: while being exceptionally careful, don’t panic.

Shinzo Abe reiterated what he had been saying the past days: that a state of emergency is not synonymous with a lockdown. This wouldn’t be similar to isolating communities or confining people to their residences, like what happened in countries like Spain, Italy, France, and the United States.

“Abroad, the confusion following the lockdown, had an impact in the spread. What we fear is fear itself,” Abe said.

The fear of panic is perhaps not without reason. The previous week, in anticipation of a potential lockdown, false information had circulated in Japan that it would happen soon, when in fact it didn’t.

Earlier in March, another piece of disinformation circulated via SNS caused people to believe that, due to an overreliance on China, that toilet paper supply in Japan was scarce. People panic-buying turned it into a self-fulfilling prophecy.

Abe therefore encouraged people to stay calm, and take heed of the sense of proportion compared to other countries. He asked people not to aggravate  the community’s fear by rushing to the countryside, like what had happened elsewhere.

“Experts agree on the fact that, even in Tokyo and Osaka, if you go on with your life, avoiding going out, then the risk of picking up the virus is still quite low. The situation compared to cities abroad in lockdown is very different. I would therefore like to ask you [to refrain] from going back to the countryside. Especially the elderly, who have a high risk of infection, I would like to ask you not to make that risk any higher,” the Prime Minister said.

More Prefectures Might Be Covered by State of Emergency

There are several questions which remain. Should the virus spread further, Abe made clear that prefectures where the state of emergency applies might change.

It would take a couple of days before the details are finalized on which companies would be deemed essential for the working of society, and so would require employees to come to work physically. The Tokyo Metropolitan Government is set to announce a final list on April 10, which will take effect on April 11.

In the meantime, Prime Minister Abe shared that the government is working on securing masks, and aiming to secure up to 15,000 ECMO machines, as well as increasing the capacity of Fujifilm to produce doses of the experimental drug Avigan for up to 2,000,000 people by the end of 2020.

Either way, it seems that Shinzo Abe tried to carry out a lockdown Japanese style, limited by lack of fines and forceful enforcement, trying to quell the panic which so easily ensures. One can only hope that, while the world waits for a vaccine, Abe called the state of emergency just in time.