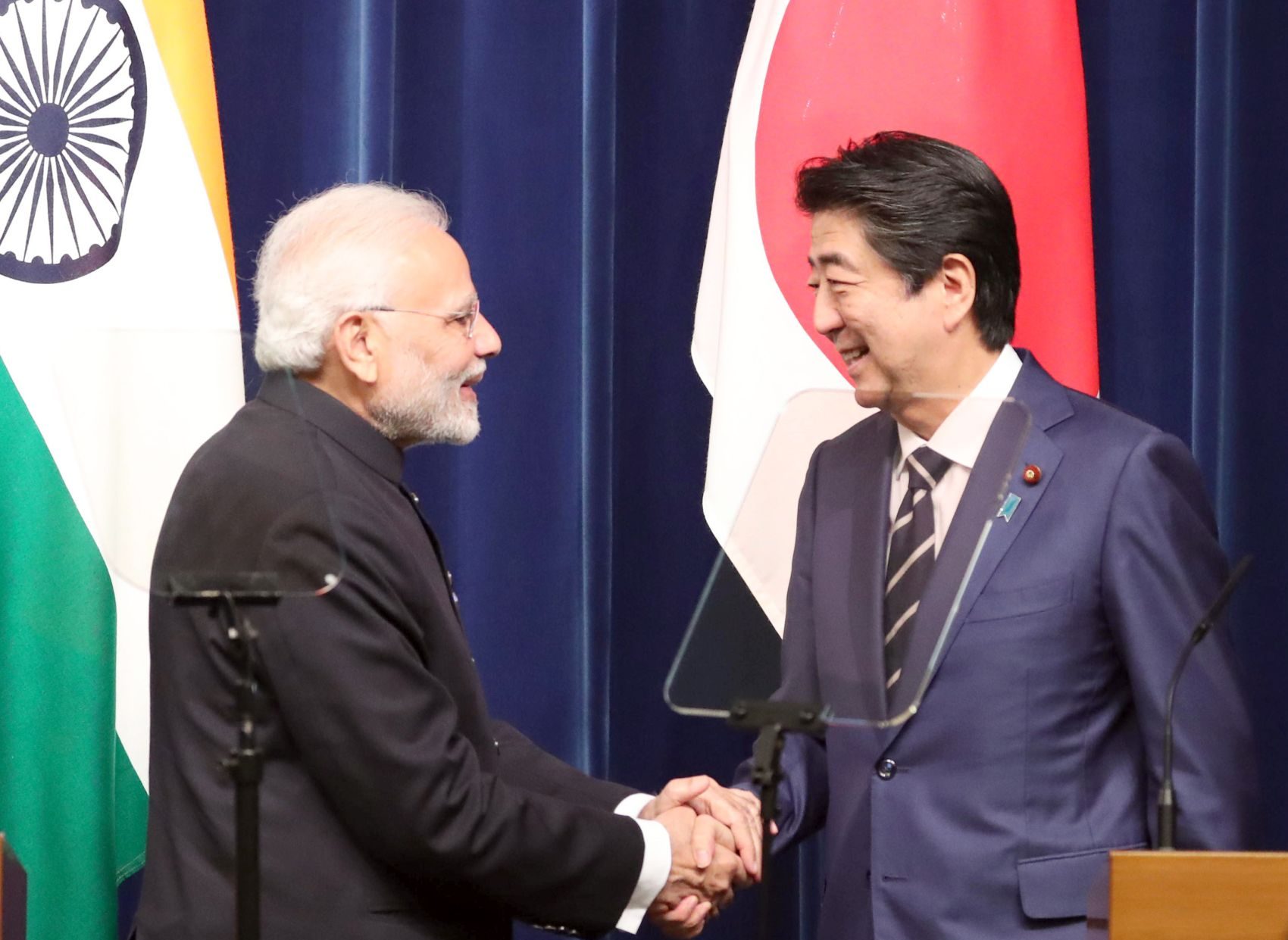 As the ruling Liberal Democratic Party was engaged in electing Abe’s successor, India’s Ministry of External Affairs was also non-committal about the scheduled meeting.

But the outgoing Japanese Prime Minister Shinzo Abe gave topmost priority to fulfilling his commitment to hold a virtual summit meeting with his Indian counterpart on September 10. In coordination with this meeting, the much delayed Acquisition of Cross Service Agreement (ACSA) was signed.

As Abe is leaving the prime minister’s office, his absence will be felt in India for a long time to come, even though his departure is unlikely to derail the bilateral engagement process.

When it comes to India-Japan relations, Shinzo Abe is regarded very highly among the Indian strategic circles and media for strengthening the bilateral relationship. He is among the few Japanese leaders who is known to the Indian public.

A famous Indian sand Artist by wishing Abe’s “Get Well Soon”, has passed down the message to his illness, and social media is also wishing for his speedy recovery.

Undoubtedly, Abe has played a leading role in strengthening India-Japan relations during his previous short stint, which ended in 2007, and during the present term, which started in December 2012. But he attached special importance to India-Japan relations much before he assumed the top post. While he was still serving as Chief Cabinet Secretary during Junichiro Koizumi’s administration, he envisioned in his most talked about book Towards A Beautiful Japan that, in the coming decades, India-Japan relationship would “overtake” Japan-United States and Japan-China relations.

He had  developed deep emotional connection with India, as we witnessed that New Delhi figured prominently in almost all his key policy strategies, starting from his confluence of the two seas (now evolved as Indo-Pacific), Asia’s Democratic Security Diamond, and the Quadrilateral Initiatives envisioned in 2007 and revived in 2013.

Why was India so special for Abe? Tomohiko Taniguchi, an advisor and speech writer for Abe, once told this author that Abe spent his childhood with his maternal grandfather, Kishi Nobusuke, who held India in high esteem. Kishi shared his memories of his India visit with Abe, especially relating how India treated him on his first overseas visit in 1957.

Indian Prime Minister Nehru offered Kishi Nobusuke a big platform to address a large gathering of Indian audience from the rampart of the historic Red Fort, from where only the Indian prime ministers addressed the nation every Independence Day. At the time, the memory of Imperial Japan was fresh among the Asian countries and no Asian country was keen to give such a platform to a Japanese leader. Kishi Nobusuke was moved by this gesture offered by the Indian leadership.

In a speech delivered at the New Delhi-based Indian Council of World Affairs in 2011, Abe noted that his grandfather’s visit to New Delhi before embarking on a U.S. trip provided him much needed political capital to bargain with America, with whom Kishi was going to renegotiate the revision of the U.S.-Japan security treaty. While the Cold War politics at that time dampened the chances of fostering closer cooperation between India and Japan, Abe was driven by the emotional connection. Compelled by strategic needs, he saw India as an inalienable partner in Japan’s national security strategies and defense planning.

Japan’s first National Security Strategy, unveiled during Abe’s second term in September 2013, noted India’s ascendance, and considered New Delhi an important player to strengthen its relations “in a broad range of fields, including maritime security, through joint training and exercises as well as joint implementation of international peace cooperation activities.”

Considering the fact that, from Kishi to Koizumi, America was considered ”first, second, and third” important country for Japan, the special importance Japan accorded to India during Abe’s period was considered as Japan’s acceptance of India as an important partner.

Abe, indeed, invested his energy in strengthening India-Japan relations when he assumed office after Koizumi left the scene soon after signing in 2006 the bilateral Strategic Partnership, which gave much-needed institutional backing to Japan’s relationship with India. But he could not leave a mark on the bilateral relationship during his first stint, as he held only one summit with then-Indian Prime Minister Manmohan Singh.

But in Abe’s second term in office, India-Japan relations progressed at a faster pace. Abe held seven summit-level interactions with his Indian counterparts — two with Manmohan Singh and five with Narendra Modi. The summits brought the bilateral level signing of a rich list signalling the two countries cooperation, including:

These will be remembered as Abe’s legacy in India-Japan relations.

Similar concerns came to the fore from within Indian strategic circles in 2009 when Japan was undergoing a regime change, and in Japan in 2014 when a change of government was certain in India. It was believed that the India-Japan relationship would be derailed since the Liberal Democratic Party, which forged the strategic partnership with India in 2006, lost power in 2009 to the Democratic Party of Japan (DPJ), a party which sought to forge an equidistant security relationship between the U.S. and China.

For those who believed that India-Japan relationship was a byproduct of a burgeoning U.S.-India relations post Indo-U.S. nuclear deal (2005), it was quite natural to believe so. But the DPJ showed keen interest in taking the bilateral relationship forward. In fact, the negotiation on the civil nuclear cooperation agreement started during the DPJ regime, and a landmark Comprehensive Economic Partnership Agreement to uplift abysmal bilateral trade volume was signed.

Similarly, questions were raised about the fate of India-Japan relations post-Manmohan Singh, who was considered the architect of modern India-Japan relations and had various official meetings with Japanese government in his capacities as finance minister and prime minister of India. But the ruling Bhartiya Janata party continued the momentum in the bilateral ties and deepened it further.

This is enough to suggest that India-Japan relationship enjoys bipartisan support both in India and Japan and will remain immune to the political changes at the domestic levels.

Moreover, India-Japan relations are no longer personality-driven, as was the case during the Cold War period. They are deeply institutionalised, as both countries made a commitment in 2006 to a strategic partnership to hold prime ministerial-level meetings annually, and they are bound by this commitment to hold a summit meeting irrespective of a change of guards.

In addition, India-Japan relations ー thanks to the strategic partnership — is much more diverse. Separate from the bilateral level dialogues, they are engaged in various multilateral dialogues:

These bilaterals and multilaterals will continue to bind Japan and India together. Moreover, most of the probable short- and long-term successors of Abe have dealt with India in different ministerial capacities and India is no stranger to them.

Moreover, most of the probable successors of Prime Minister Abe, including Fumio Kishida, Shigeru Ishiba, and leading contender Yoshihide Suga, have dealt with India in different ministerial capacities and India is no stranger to them.  Even though Abe’s absence may be felt in India, Japan’s economic and strategic interest in India — and the need to strengthen the strategic partnership amid an assertive China — will keep the bilateral relationship on track.

Shamshad A. Khan is author of Changing Dynamics of India-Japan Relations (Pentagon Press, 2017) and assistant professor at BITS Pilani’s Department of Humanities and Social Sciences. He has been associated with leading think tanks in India (IDSA, ICWA, and ICS) and Japan (JIIA, PRI, IDE-JETRO, and the Slavic Research Centre Hokkaido University).