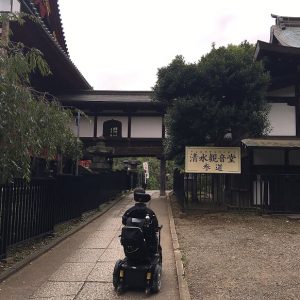 Josh Grisdale is a Japanese citizen originally from a small town in Canada. He was in a wheelchair, but this did not stop him from traveling to Japan and falling in love with the country — so much so that he moved here, permanently.

JAPAN Forward sat down with him to discuss how his incredible adventure in Japan began, the philosophy behind Accessible Japan, and the challenges that remain to be overcome.

How It All Began

Welcoming us with tea, our host tells us that his first interaction with Japan came from a course he took in high school.

Grisdale divulged that, although the teacher wasn’t very strict, “his love of Japan was quite infectious, so it kind of rubbed off on me.” Reflecting in hindsight with a smile, Grisdale even acknowledged that, were it not for the class being so relaxed, perhaps he would not have kept up with it. It’s funny how things work out sometimes.

It was right after high school graduation, back in 2000, that then-young Grisdale came to Japan for the first time with his father. He recalls the trip with affection, noting that the functioning train system he found here allowed him to taste independence.

“In Canada, you need a car to do anything, which means I can never do anything alone. Having a train, even though it wasn’t perfect, meant that there were still a lot of places I could go.”

A few years later, in 2003, when he came back to Japan with a friend, the bullet train was already very accessible. “They would have a seat removed so that a wheelchair can fit, the same carriage had an accessible washroom and a wider entrance. I was quite impressed.”

After another trip to Japan with his parents upon graduating from university, it looked like Grisdale’s fate was sealed. In 2007 he decided he was going to move to Japan.

The Move, and Adapting to Japanese Life

When he initially moved to Japan, Grisdale occupied himself by working at a company called Wheelchairs of Hope. The company recycles perfectly usable wheelchairs it receives from local governments in Japan and takes them to places which need them all over Asia.

In 2012, though, he moved to his current occupation — webmaster at a facility that cares for the elderly. Grisdale joked that, although his background was in applied mathematics, “I always seem to become the web-guy!”

More recently, in 2016, Grisdale took the step of becoming a Japanese national. He told us that when asking himself where he wanted to be in 50 years, “I realized I wanted to be in Japan for the long haul.” Therefore, it seemed to be the practical thing to do.

He explained to us how he wanted to be involved in the future of Japan. And he described how really excited he was when he voted for the first time — so much so, he said chuckling, that, “I was almost disappointed when I went to vote and nobody stopped me by asking, ‘You are not Japanese?!’”

The Start of ‘Accessible Japan’

It was in 2015, when he was already feeling comfortable in Japanese language and culture, that he started the website, Accessible Japan.

He said that at the beginning it was nothing more than a blog. “When I traveled around, I would often read someone else’s blog and find useful information. I thought, this is something I can do.”

While his site started out as a blog, his aim was to bridge the gap between the availability of information on accessibility in Japanese and in English.

Grisdale slowly started adding more places to his site. Following suggestions, he would research and add yet additional information. The website became larger and larger, until it became “out of control, in a good way,” he said, laughing.

He explained that part of his motivation is the fact that there is a bit of an image problem of accessibility in Japan. On the one hand, many people abroad have this image of Japan not being accessible because of what they see in popular media: the small shops and the crowded trains. On the other hand, that is not all there is to Japan.

How Does Japan Compare to Canada?

Japanese themselves ask, “But surely Canada is a lot better?”, to which Josh replies a resounding “No.”

In fact, reading Accessible Japan, we discovered that, interestingly, Japan was the originator of the tactile floor for people with visual impairment. Rest assured, if you haven’t already noticed the textured flooring, look again. You will find them everywhere.

But also, we discovered that Japan is forward-thinking with multi-purpose toilets. In other countries accessible toilets are normally located either in the corner of the men’s or women’s toilet. However, in Japan they are almost always in a separate place, making them accessible for everyone. The point, Grisdale explained, is that: “I am now almost never concerned about finding a toilet.”

The information he is spreading also seems to be gaining popularity. He may be the only one writing the content, but some of his blog’s most relevant information have been compiled into a Kindle e-book and a paperback guide called Accessible Japan’s Tokyo (2017, Amazon Digital Services). Although it’s not in money making territory, it’s 8th on Amazon in the category of “Special Needs Travel.”

Even though maintaining the blog isn’t his full time job, Grisdsale aims to expand his network in the future so that people can help him add accessibility information about Japan, both in breadth and depth.

He noted in particular that, in view of the 2020 Olympics and Paralympics, he had engaged in consulting work with both the government and the Japan Olympic Committee, to help raise more awareness about Japan’s accessibility.

He doesn’t hide the reality that there are still many challenges to be overcome. Although most train stations in Tokyo are equipped for people with disabilities, there are still concerns with hotel accommodations and restaurants. Sometimes, by their sheer tiny size, establishments might not be able to accommodate an elevator. The availability of disability-accessible rooms in hotels is also still limited.

Taxis are beginning to be made more accessible, but in general the city still needs to equip itself for an inflow of Paralympic athletes. One small elevator in a station, for example, cannot accommodate a group of people in a wheelchair.

The Future of Accessible Japan

Grisdale is dealing with these challenges by focusing on accessibility as a business opportunity. “There are 1.2 billion people in the world with disabilities.” Moreover, he added, “people with disabilities leave more of an economic footprint.” This means, they travel in groups, through agencies, and families come along as well.

On top of that, accessibility includes people with small children, and the elderly. “It’s an opportunity for Japan to develop a model and export it elsewhere.”

Above all, what shines through during the whole conversation is the fact that Josh Grisdale genuinely loves Japan and wants people to come visit to see why.

“Japan needs to have more self-confidence,” he said. “Just the other day, I received a message from a man and his daughter, who has a disability. They both love anime, but have never come to Japan because they thought it was not accessible. After reading my website, they decided to book their tickets.”

He continued: “When I first came here, I was the only person around in a wheelchair. Now, more and more people are getting out and about. Something needs to be done to correct this image and show that we are an accessible country.”

I took my leave on this positive note. As I did so, I found myself contemplating Grisdale’s words: “Although there are many challenges ahead, tackling them will only make Japan stronger.”

Let us look forward to Japan’s progress as it faces the challenges of hosting the Tokyo Olympics and Paralympics!