Across the Pacific in Two Hours: JAXA Sets Sights on Mach 5 Supersonic Aircraft 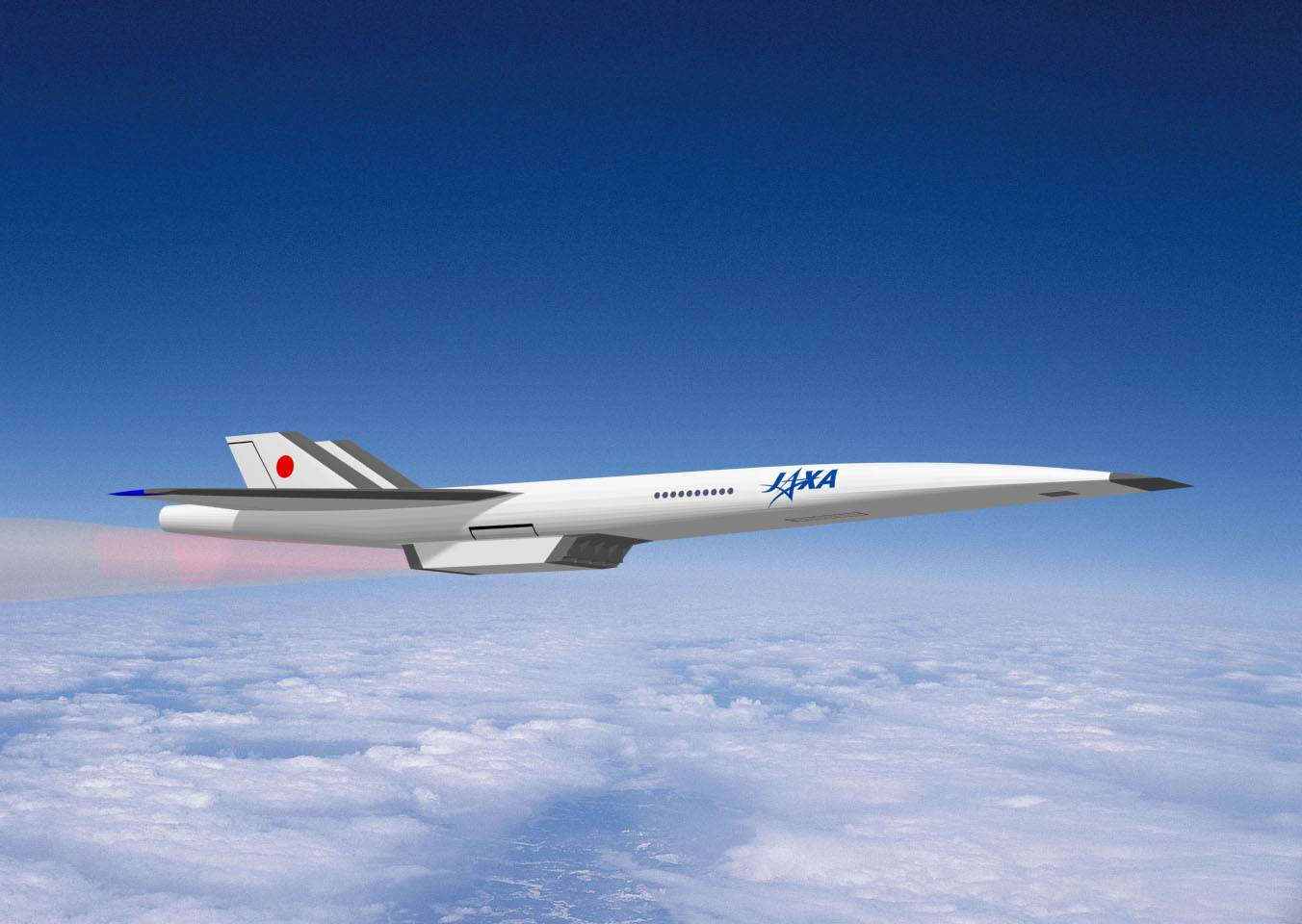 The Japan Aerospace Exploration Agency (JAXA) is advancing research on a hypersonic Mach 5 passenger aircraft that can cross the Pacific in merely two hours.

The agency aims to reach its technological goals within the 2020s, developing a technology that can be applied to both manned and unmanned spacecraft. Tremendous development costs have JAXA considering international cooperation in development, but its technological stockpile will prove essential in the agency taking on the leading role.

According to the conceptual plan, the aircraft would hold 100 persons. It would be flat-shaped, about 90 meters in length and about 10 meters across. Seating would be arranged in 10 rows, each with 10 seats across.

The aircraft would fly at an altitude of 25,000 meters, where the air is thin and resistance is low. It would have a cruising range of 9,000 kilometers which, if further extended, would allow the aircraft to reach anywhere in the world in under four hours.

It would make a flight from Tokyo to Europe or North America feel like taking the bullet train down to Osaka.

The flat body of the aircraft is designed to increase the “aerodynamic lift” for floating in the air. The main wings are near-triangular shaped “delta wings.” The design is suited to flight that exceeds the speed of sound, with the wings attached at the rear like the supersonic Concorde.

Four engines installed under the body of the plane would use liquid hydrogen as fuel. As liquid hydrogen vaporizes at temperatures above minus 253 degrees, the fuel tank is designed as a “vacuum insulation” structure, like a thermos.

Cooling the Air with Liquid Hydrogen

The key to turning the concept into reality is the “hypersonic turbojet engine.” “Hypersonic” is generally defined as speed that exceeds Mach 5, or five times the speed of sound.

The use of liquid hydrogen as fuel is a crucial point.

Restricted by these high temperatures, Mach 3 was the limit using conventional jet fuel. But by cooling the air with liquid hydrogen, the speed can be accelerated up to Mach 5.

Bringing the Technology to Life

The next major step will be conducting test flights in cooperation with Waseda University, using the experimental aircraft HIMICO. HIMICO is expected to be launched into space to an altitude of 100 kilometers in 2021, using a JAXA small-scale sounding rocket.

After reaching space, HIMICO will immediately descend at Mach 5, pulled by gravity. During its descent it will separate from the rocket and shift into level flight, using jet propulsion for about 10 seconds, confirming its operating state.

Hideyuki Taguchi, research and planning manager who leads the research project at the Aeronautical Technology Directorate of JAXA, said: “We are on track with the technology. It’s friendly to the environment, too, because it does not emit carbon dioxide.”

Technology to reduce the explosive noise often regarded as a problem for supersonic flight is also being tested in another JAXA research project.

More than anything else, the extremely high ￥2.4 trillion JPY in expected costs for development of the hypersonic passenger aircraft will make it difficult for Japan to go it alone. There has been some activity taking place in development in the United States and Europe, making international joint development more realistic.

Interest at the Ministry of Defense

When it comes to crossing the threshold into realization of hypersonic speeds, the areas of space development and national security may face lower barriers than passenger aircrafts.

For example, a speed of around Mach 4 and a small airframe would suffice for a “space plane” that could be launched to an altitude of 100 kilometers, carrying just a few people and remaining in space for a few minutes.

The airframes of unmanned aircraft used for reconnaissance are not very large. Based on the National Security Technology Research Promotion Scheme established by the Ministry of Defense, research is already underway on a “hypersonic combined-cycle engine” that combines a conventional jet engine with a hypersonic engine and can switch between the two according to speed.

If the technology could be actualized, the aircraft could reach anywhere in Japan in under 30 minutes.

Of late, Russia and China’s missile development has attracted attention in the hypersonic arena. JAXA’s initiatives are of extreme importance if Japan is not to be left behind in this technology development.