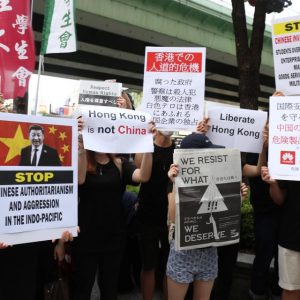 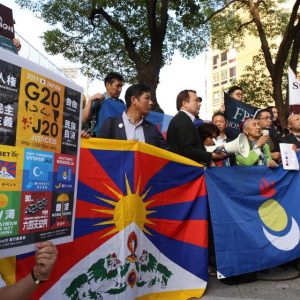 Activists bring attention to human rights of ethnic minorities in China during G7 Summit in Osaka, 2019 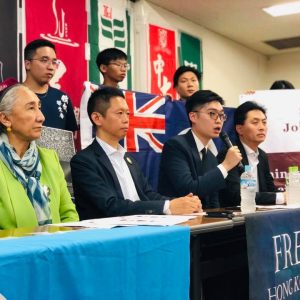 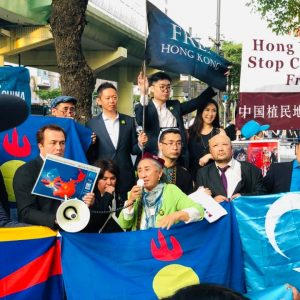 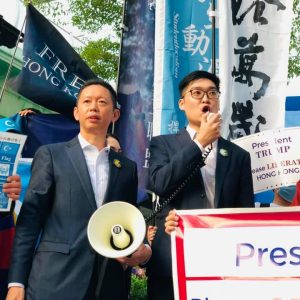 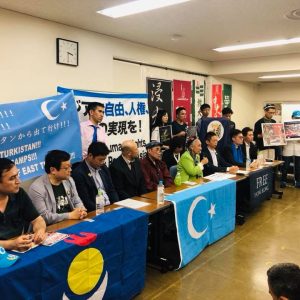 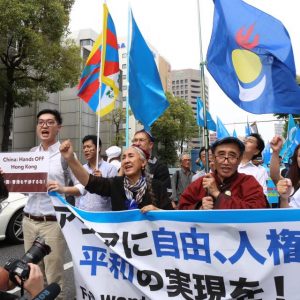 As the G20 summit was in full swing in Osaka on Friday, June 28, with leaders and ministers from 20 countries holding multilateral discussions on the digital economy and world trade, a number of international organizations held side events to bring to the fore other concerns.

Multiple organizations spoke up regarding the infringement of human rights in China, among them the treatment of the Uyghur minority in China’s western Xinjiang region, also called East Turkestan and Uyghurstan. News reports indicate as many as three million ethnic Uyghurs have been forcibly interned in indoctrination camps resembling ethnic concentration camps.

In a press conference, Rebiya Kadeer, the president of the Free Indo-Pacific Alliance and tireless activist for the rights of the Uyghur minority in China, spoke almost in tears about how China’s infringement of human rights needs to be stopped, saying, “Nowhere in the world is there such a terrible situation.”

Other enthic groups participating in the event added their own points about human rights in China. Among those present were the Southern Mongolia Congress led by Shobshuud Temtselt and Students for A Free Tibet Japan Association led by Tsering Dorjee. The president of the Japan Uyghur Association, Ilham Mahmut, also participated.

In particular, Ilham Mahmut brought attention to how crucial it was that something be done now, with so many world leaders gathered in Osaka. “Eighty percent of the world economy is gathered here in Osaka. China is one of the biggest economies in the world. We want people to understand the issue,” he said.

The most recent example of criticism of China for its attempts to control its citizens has been the Hong Kong protests.

Unfolding earlier in June, the demonstrations were over the Hong Kong executive’s proposed extradition bill, which would allow the extradition to mainland China of fugitives from Hong Kong that are accused of crimes in Taiwan, Macao, and Hong Kong, for trial under China’s justice system. The protests were so massive that Hong Kong Chief Executive Carrie Lam shelved the proposed bill “indefinitely,” though she refused to withdraw it.

Fittingly, the former founder of the Hong Kong National Party Andy Chan Ho-Tin also attended the press conference in the center of Osaka on Friday. The first leader of a party with a nationalist agenda since Hong Kong was handed over from British administration to Chinese rule in 1997, he warned the people present about the dangers of working cooperatively with China.

Bilateral talks between Japan and China in Osaka were positive in general.  Prime Minister Shinzo Abe even invited President Xi to Japan for an official visit in the spring of 2020 — his first visit to Japan in his position as president of China.

Nevertheless, Abe, during their talks Thursday evening, June 27, brought up the importance of respecting the “freedom of Hong Kong” and human rights.

On this account, both Rebiya Kadeer and Andy Chan Ho-tin expressed gratitude on behalf of their organizations to Prime Minister Abe.

“I want to thank Prime Minister Abe. The fact that he mentioned the issue for us in the context of the G20 meant the world to us,” said Kadeer.

Ho-tin also expressed similar sentiments: “We would like to express gratitude that [Prime Minister Abe] raised the issue right to his (Xi’s) face.”

However, Ho-tin also warned against getting too friendly with Japan’s neighboring country. “China is the enemy of the civilized world, so one should always be careful when working together with the enemy,” he said.

The press conference, which was organized under the Justice 20 Committee, a group which aims to bring attention to the human rights infringements of China, also held a rally at an intersection in Namba in the center of Osaka on the evening of June 28. An estimated 300 people were expected at the event.

Issues beyond human rights in China are also competing for the attention of G20 leaders. With the much awaited United States-China talks on the calendar for Saturday morning, June 29, some of those unresolved issue of concern are likely to come up.

World leaders agreed on better regulation of the World Trade Organization and the importance of “free, fair world trade” following multilateral economic talks. However, no specific measures were decided. One reason is that the current trade conflict between the U.S. and China eclipses many of the other issues.

Observers took note when, in comments following bilateral talks with the President of Brazil Jair Bolsonaro, U.S. President Donald Trump said he was feeling hopeful ahead of talks with his Chinese counterpart. “At a minimum, it will be productive — we’ll see what happens and what comes out of it,” Trump said.

Further multilateral and bilateral talks are scheduled in the next few days. At this point, however, questions remain about whether any concrete agreement will emerge in relation to the G20 countries’ relations with China.