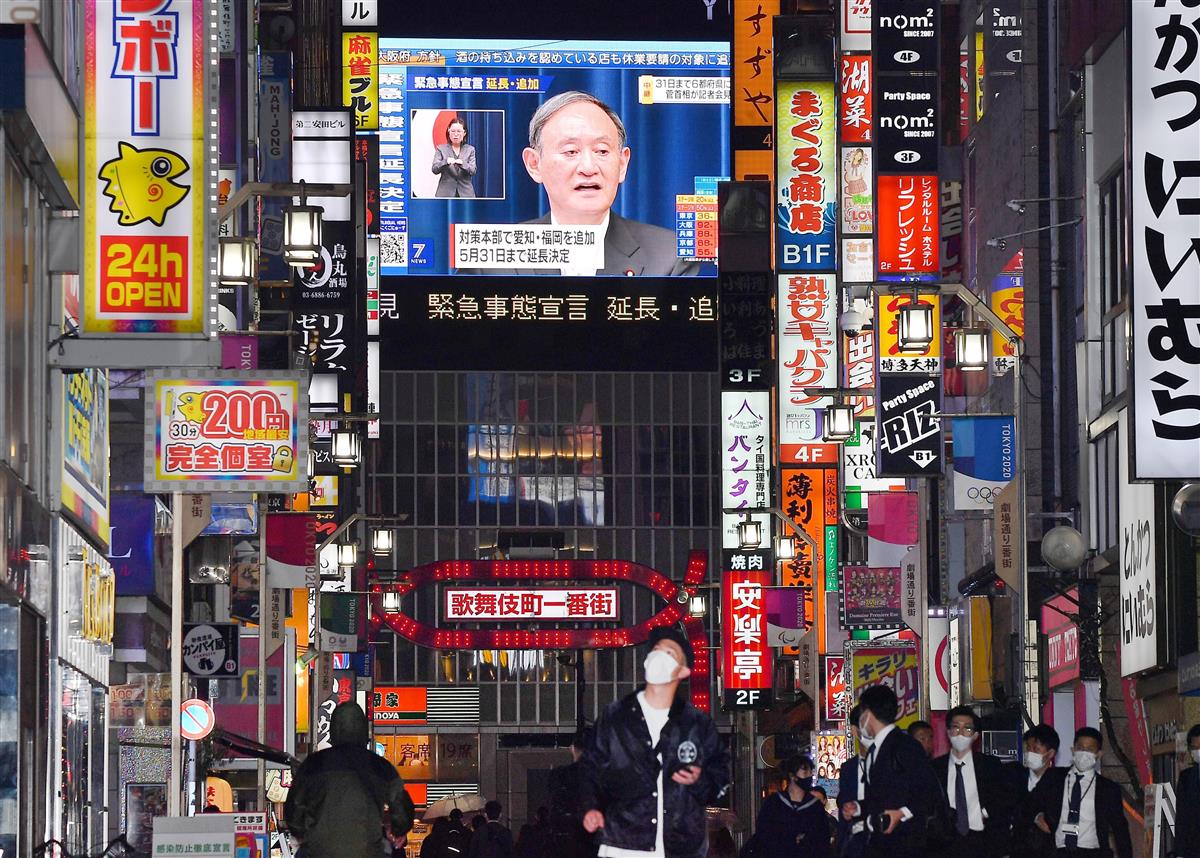 On May 7, the Prime Minister of Japan Yoshihide Suga held a press conference to ask once more the collaboration of the country to keep the number of COVID-19 cases under control.

Among the key policies he announced  was a pledge that his government was aiming for “one million vaccinations per day” from about May 24.

In addition, the prime minister extended the state of emergency to two additional prefectures, Aichi and Fukuoka, on top of the currently affected Tokyo Metropolis, Osaka, Hyogo, and Kyoto prefectures, starting from May 12.

On May 7, Japan saw the highest number of deaths in one day since the start of the pandemic: 148. Tokyo recorded 907 and Osaka 1005 new infections, pushing many, including Tokyo Governor Yuriko Koike to say that “It is no time to end the state of emergency.”

When asked about what brought about the decision, Suga conceded that the measures were working as there had been a “60 to 70 percent decrease [in the evening] and 40 to 50 percent during the daytime,” in the number of people moving about, compared to before the state of emergency.

However, PM Suga also used the press conference to explain the driving reason for extending the measures at this time, saying, “There are many regions where the seriousness of infection is at Stage 4. Osaka still has pressure on its medical system. So to that end, I decided that it was necessary to continue the emergency measures to improve the situation.”

Stage 4 indicates the state of COVID-19 infections in the specific area, in this case, Osaka. It takes into account several factors, such as hospital bed occupancy rates and the number of new infections per day, among others.

In a request for cooperation to the Japanese people, Suga said calmly: “I am aware that starting with restaurants, the sectors of tourism, sport, and other events are taking a heavy hit. So in order to make sure their efforts are used wisely, we will be taking effective measures.”

Over and above emergency measures, the prime minister was quick to stress the significance of the vaccine as the main tool to fight the virus, particularly in the face of increasing corona fatigue among the public.

“With the long-standing effects of pandemic, the determining factor will become the vaccine…I plan to stand at the fore and make sure that the pace of vaccinations picks up,” said Yoshihide Suga.

His comment seemed to be a nod toward rising frustration among the Japanese population at the sluggish pace of the vaccine rollout. Japan didn’t start vaccinating medical staff until February 12. Vaccines for those over-65 were due to start on April 12. However, as of May 7, barely one percent of the population, or just over 1 million people had been fully vaccinated.

Until now, the explanation provided by the minister in charge of the vaccination rollout Taro Kono has been that doses of the Pfizer vaccine, the only one approved for use in Japan, were slow to arrive in the country.

But as boxes of vaccines piled up in Japan between March and April, other bottlenecks have come to the fore, including claims of a lack of manpower to deliver vaccinations and logistical problems, among others.

The prime minister used the press conference to reassure the public that the government was planning on picking up the pace of vaccinations, starting from May 10, with a heavy push from the week of May 24, with the aim of delivering as many as one million vaccination jabs per day. Can they do it?

“In the case of the influenza vaccine, we know that Japan manages to vaccinate as many as 600,000 people a day on average. And this time we are carrying out the program on a much wider scale. That is how we came up with the number, and we think it’s doable,” said Suga.

The Ministry of Health has also previously announced that it is teaming up with the Ministry of Defense to set up large vaccination centers in Tokyo and Osaka, each with a capacity of 10,000 jabs per day.

PM Suga, responding to follow-up questions at the press conference, also reiterated his confidence that the vaccination push aimed at all over-65 residents would finish by the end of July:

“When we spoke to local governments in April, 1,000 out of over 1,700 said they would be capable of finishing vaccinations by the end of July. We are currently in the process of hearing individually from each local government, and with the doses now scheduled to be delivered, I think that it’s possible to achieve that goal.”

He acknowledged, though, “We are hearing that there is a lack of manpower [to inject vaccines], so on that front we want to provide support in order to make sure all Japanese can get back to normal as soon as possible. “

In addition, for those areas who finished vaccinating over-65 early, Suga voiced the aim of moving on to younger residents, especially those wtih pre-existing conditions, starting in June if possible.

Virus mutations are an increasing concern to the medical establishment and government officials. Acknowledging their force, PM Suga expressed a continued sense of crisis, specifically citing the rising percentage of infected among younger generations.

“We are seeing an increasing number of infections of people in their 20s to 50s. It’s important to take measures now to keep the virus from spreading to those most at risk, those over 65,” said Suga.

Addressing a handful of new infections coming from India, Suga confirmed that, going forward, those coming from countries where the Indian variant of the virus had been found would be required to do extra tests and stay in a government designated quarantine accommodation for three days.

These measures are currently in place for all countries where mutant variants have been confirmed, starting from the U.K, Brazil, South Africa, several countries in Europe, among many others.

In addition,Shigeru Omi, head of the government subcommittee in charge of COVID-19 who was also present at the press conference on May 7, explained that there was now a plan to ask the government to enforce wider testing for the virus.

“According to clinical trials that we have done around the country, we know that 7 to 10 percent of those infected with light symptoms, continue to go to work or elsewhere for their studies. Therefore, the key is to catch the virus early. We are asking the government to make wider use of [virus] testing kits'', said Omi.

The Olympics and the Vaccine

One key point on everyone’s mind is how the vaccine rollout will affect the Olympics.

To try to quell some of the worries, Yoshihide Suga reiterated that “The health of the people of Japan is paramount.”

He went on to explain the decision reached with the International Olympics Committee (IOC) and Pfizer BioNTech on providing free vaccinations to all Olympic and Paralympic athletes due to participate in the Games.

Responding to concerns that foreign journalists and staff related to the Olympics would not necessarily be vaccinated when they come to Japan, Suga added, “We have several measures in place including immigration policies, and I plan to make sure they are properly imposed.”

The April 2021 measures have been the strictest yet, calling on eateries and bars which had karaoke or served alcohol to close altogether.

Looking ahead, PM Suga explained that it was necessary to continue those measures, given the “high effectiveness that the experts have found in the policy.” He added that bringing alcohol into establishments would continue to be discouraged, and restaurant operations would only be allowed until 8 P.M.

On the other hand, other measures have been slightly relaxed compared to the end of April. Department stores and other locations more than 1,000 square meters, will be allowed to open, in principle. Large music and sporting events could take place with a maximum of 5,000 spectators, but they must end by 9 P.M.

On the other hand, local government reactions were more cautious.

Earlier in the day on May 7, the governors of Osaka and Tokyo both released statements saying that, in their respective jurisdictions, the current recommendation for department stores to stay closed would continue for the time being.

As the mutant virus continues to put pressure on the medical system, it’s clear that pressure is mounting on the government to bring down the risk of infection.

Right now, the best option appears to rest upon an effective vaccine rollout. Only time will tell if the COVID-19 situation will improve in the next few months in Japan.