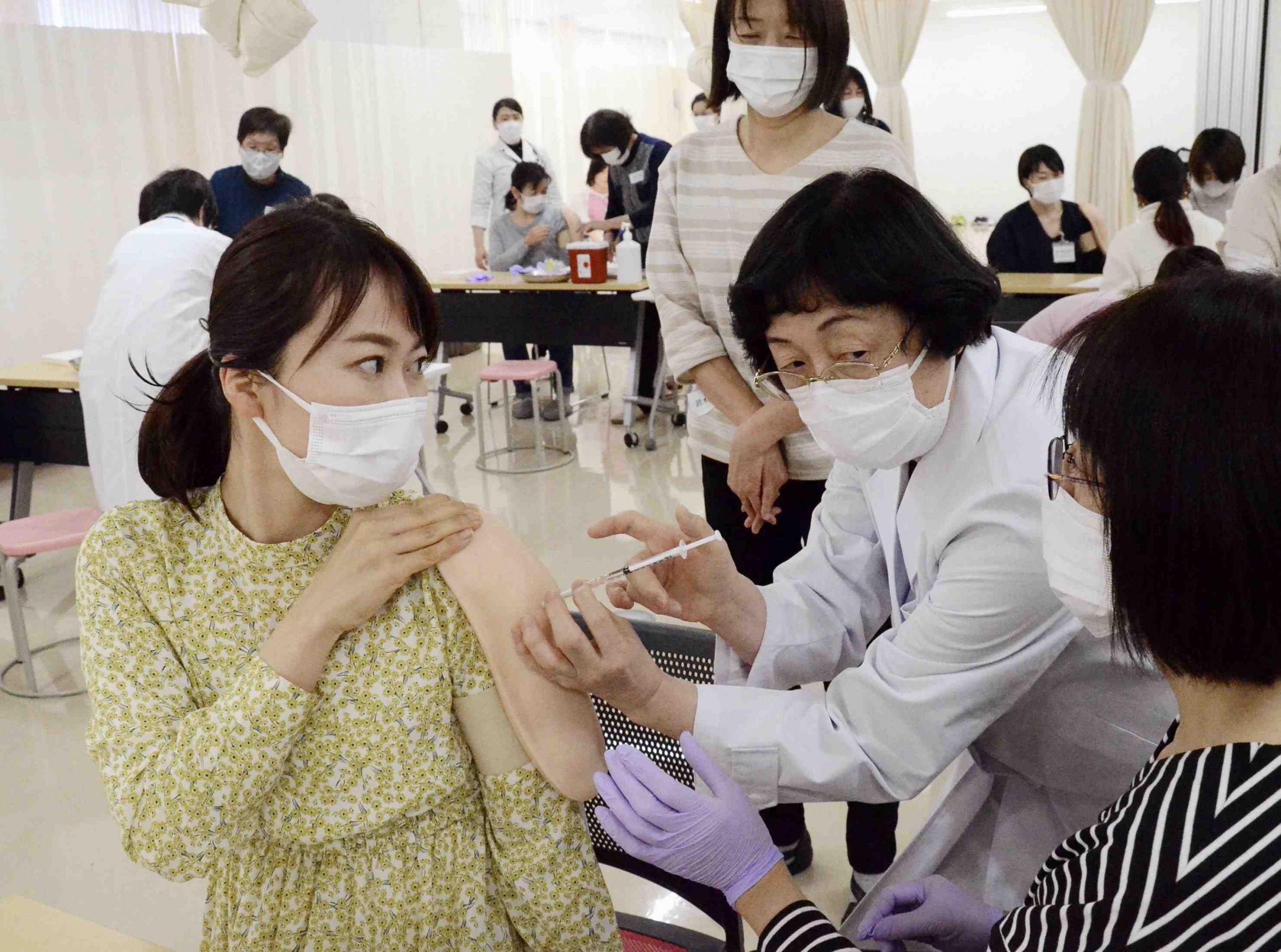 The real battle against time and the virus should have started before now. That is the feeling that has permeated the air in Tokyo these last days of April.

Major cities such as Osaka, Hyogo and Tokyo are grappling with a rising number of cases due to mutant varieties of COVID-19 that have been spreading like wildfire.

On the other hand, the government is running out of ways to fight the virus, with increasing corona fatigue among the population. On April 26, the first working day under Tokyo’s third state of emergency, as many commuters as ever flooded the trains.

What is left? The vaccine, of course.


What is the Government Doing?

The government has acknowledged the issues.

Prime Minister Yoshihide Suga announced on April 27 that the Ministry of Health is teaming up with the Ministry of Defense to use its medical workers to help set up temporary vaccination centers in Tokyo and Osaka, the vortex of the current spread of infection. These are due to start up on May 24.

For a period of about three months, the government has pledged it will carry out up to 10,000 vaccinations a day at each of the two sites.

Where is the Vaccine?

As of April 26, 2.9 million medical workers (roughly half of the total) had been vaccinated, but only around 260,000 people are getting vaccinated in one day.

Those over 65 gained a measure of hope as vaccines for this segment of the population started on April 12. However, vaccinations have been progressing even more slowly than for medical workers, with just over 93,000 receiving their first jab as of April 26. This amounts to just over one percent of the population being vaccinated.

Minister of Health Norihisa Tamura has pledged to finish vaccinating all of the over 65 population by July. Yet, plans have yet to be actualized and frustration is mounting.

An FNN-Sankei poll of 1,180 subjects nationwide on April 17-18 found that 56 percent of respondents were “not satisfied” with the current vaccine rollout schedule.

What is the hold up? We unpack some of the problems below.

Only One: To begin with, Japan has approved only one vaccine for use in the country ー the one produced by German-American company Pfizer-BioNTech.

British-Swedish company AstraZeneca and American giant Moderna, both of which are licensed to manufacture in Japan, submitted their applications later and are now waiting for approval of their vaccines.

While the approvals might possibly come through in May, the delays have left Japan reliant on shipments of the much-coveted Pfizer vaccine alone.

Held Up in Europe: A second problem has been the fact doses from the EU-based Pfizer factories have been slow to reach Japan.

Japan, with a very low COVID-19-related death toll compared to its fellow G7 and other Western countries, seems to have been ranked relatively low in the priority list. For example, Pfizer didn’t begin clinical trials in Japan until October 2020.

Adding to that delay, the European Union has maintained the right to divert vaccine shipments produced in EU states to European countries, should the situation call for it. They did so in January, when the EU blocked an AstraZeneca shipment to Australia. The risk of this happening again is a continuing worry for officials and the medical system in Japan.

Limited Pfizer Doses: Nonetheless, even if with a lag, Japan has managed to secure some doses from Pfizer. Between February and March there were seven shipments of the Pfizer vaccine, and in the month of March an estimated maximum of 2.3 million Pfizer doses arrived in Japan, just after the start of the vaccine campaign for medical workers on February 12.

In April the government said that about triple that number of doses were expected to be available in Japan, just over 6 million, with shipments being ramped up further in May, according to the Minister in charge of vaccinations, Taro Kono.

As of now, publicly released estimates put the number of vaccines in Japan at a level sufficient to treat all medical staff, but falling short of meeting the needs of the over-65 population, which comprise 36 million people.

Trickle of Vaccines to Local Governments

This is the reason the national government has been distributing the vaccine at a trickle pace.

The rollout to the general public started at 120 locations on April 12, and is slowly being extended all over the country. As of the week of April 26, all municipalities in Japan (1,718 in total) will have received a box of vials from which approximately 975 doses can be extracted. 39 million doses are also said to be scheduled for delivery nationwide the following week.

Minister Kono, aware of public concerns, pledged on March 12 that the pace would pick up in May. He said vaccine distribution would be ramped up, with 4,000 boxes delivered nationwide by May 9.

The first hurdle, of course, has been proper handling of the vaccine. Nihon Keizai Shimbun detailed some of the hoops through which a vaccine had to go in a report in mid-April. Those include safe transportation without vibration to the extent possible, and maintaining the temperature at -70 degrees Celsius, for a journey of maximus three hours, according to guidelines provided by the Ministry of Health.

These challenges Japan has met head on. Well-established delivery companies such as Yamato Transport (Kuroneko Yamato) and Sagawa Express (SG Holdings HD) are helping out. Tech giants such as Panasonic have been providing freezer equipment. Travel companies such as JTB and Nippon Travel Agency, which have seen a large drop in business since the start of the pandemic, have been enlisted to help with the office work of organizing the vaccine rollout campaign.

However, having met the logistical challenges, new ones have arisen in process, specifically, getting people to show up for vaccinations.

One major logistical hiccup has been at the local government level. In March, Minister Kono said that the needs of each local government should be accommodated “flexibly,” including the local choices on starting dates and organizational details. However, as of April 23, only six of the 23 wards in Tokyo had started vaccinations for the general over-65 population.

Moreover, in the first days of the vaccine rollouts, the news was peppered with reports detailing problems in the sign-up system. For example, Kofu City wanted people to sign up for vaccines by using the messaging app LINE, but changed direction half-way through.

In another case, Kochi City started vaccinations on April 23, but according to The Sankei Shimbun, the high demand caused the website to crash, as many hopefuls crowded the designated vaccination sites for the 800 doses prepared that day.

One aspect of the challenge has been the introduction of a system for recording vaccinations called VRS (vaccine registration system), requested by Minister Taro Kono to facilitate nationwide administration of the vaccine program. The initiative calls for up to 50,000 tablets to be sent all over the country, starting at the beginning of April.

Quite apart from the fact that the tablet distribution was quite late when vaccinations were scheduled to start on April 12, it also came on top of two already existing systems in place for tracking the medical workers’ vaccinations and new COVID-19 patients.

Even after vaccinations started, Nikkan Gendai reported on April 21 that problems in introducing the software caused delays in the vaccinations data being reflected on the database.

The government’s main drive for introducing VRS has been to get an instant reading of how the vaccine rollout is progressing all over the country. Yomiuri Shimbun reported that as of April 23, 99.7 percent of local governments had applied to introduce the new system. At the same time, news reports also read that Saitama prefecture, next to Tokyo, had yet to apply to introduce the system, and therefore no data on vaccinations in the prefecture was available to the government.

On a parallel track, as recently as April 27, there was a malfunction in the online system for booking vaccines for medical workers in Tokyo, causing the whole booking system to come to a halt. The cause of the malfunction was not clear. However, the Tokyo Metropolitan Government has said that operation should be restored by the beginning of May.

For those waiting for vaccines, perhaps the most frustrating news throughout the rollout has been learning that doses slotted for people who failed to show up for their vaccination appointments were thrown away. This has happened overseas, as well as in Japan, but the frustration may be more tangible in Japan, where the vaccine has been so inaccessible until now.

The logistical hurdles are evident in a handful of reports in which about 10 doses were thrown away when appointment schedules were not met. Frustrated medical workers pointed out on Twitter that some of this risk could be dealt with by having yet-to-be vaccinated medics sign up for unused doses. However, as the vaccination of medical workers nears the end, it is a temporary solution at best.

A mistake in mixing the vaccine with saline solution at a hospital in Tokushima Prefecture was reported to have led to 12 doses being discarded on April 23. In a different incident, one Yamaguchi Prefecture hospital had to throw away 18 doses due to a malfunctioning freezer.

To address the confusion, some locations have started accepting only same-day appointment bookings, and Minister Taro Kono has expressly asked local governments to make sure that doses don’t go to waste.

Lack of Staff to Administer the Vaccine

Another reported bottleneck has been the availability of medical staff to carry out the vaccinations. This has been even more true since several regions have been put under stress due to the state of emergency, which started on April 25, 2021.

On April 10, Nihon Keizai Shimbun reported that among major local governments, over 60 percent had said that they feared they lacked sufficient trained medical staff to carry out the vaccinations.

To give an extreme example, on April 26, NHK reported on the case of Shingo, a town of 2,300 people in Aomori Prefecture, which despite having access to the vaccine was unable to begin vaccinations until after May 11, the end of the Golden Week holiday. The three permanent medical workers in the town were insufficient to both vaccinate and monitor patients afterward for medical reactions, and help from neighboring towns was unavailable until after the national holiday.

Aware of the problem, in March the Ministry of Health approved an initiative to have Japan Self-Defense Force (JSDF) nurses dispatched all over the country. In addition, Prime Minister Suga announced on April 23 that dentists will also be granted permission to carry out vaccinations to speed up the rollout.

Questions as the Program Starts in Different Localities

The national government is set to distribute vaccines to all local governments, large and small, at the same time. However, this means that localities with smaller populations in non-urban areas of the country could finish quickly, while large cities more vulnerable to the rapid spread of the virus could take much longer to finish vaccinations, a phenomenon that has also been observed overseas.

Starting from May, cases of vaccines will be sent to the different wards on the basis of the local elderly population and the number of vaccine cases requested by the local government.

In Tokyo this has sometimes caused an imbalance even among wards within Tokyo, where there has been a difference of as much as 44 boxes of vaccine between Katsushika Ward (47) and Minato Ward (3), according to NHK.

This isn’t necessarily a negative thing, but it does mean that from the start there will be hugely varying vaccine rollouts on a local level.